This is my third and, I promise, last Holmesfield holiday post - we just did so much!

Day 7 - Thursday
Our last full day of our holiday before heading back home on Friday.  We'd had a really busy and active few days so were hoping for a nice chilled out day, with no cake!

We woke up again to really thick fog and had a nice slow start, with a bit of a lie-in, a late and lazy breakfast and finally managed to log our Geocache finds from our Carlton Lees walk a few days ago, which we hadn't got round to yet.

It was lunchtime by the time we decided to venture out into the gloom, with initial thoughts of heading up to Ladybower Dam and hoping that the fog would clear later on, as it had been doing for the rest of the week.

Once we got out onto the road however, our thoughts changed. You couldn't see more than 50 yards in front of you so we decided to stay on the main roads and head for Bakewell, which is a small town not that far away.  We thought we'd play it safe and have a walk round the shops.

Well, we got to Bakewell and the mist had cleared considerably so we basically decided not to stop but to risk it and head up to the Dam anyway.  As we went out of town the mist started to draw in again and by the time we passed Monsal Head, one of the best viewing points in Derbyshire, we couldn't see very much at all.  It didn't look like we'd be taking many pictures today. 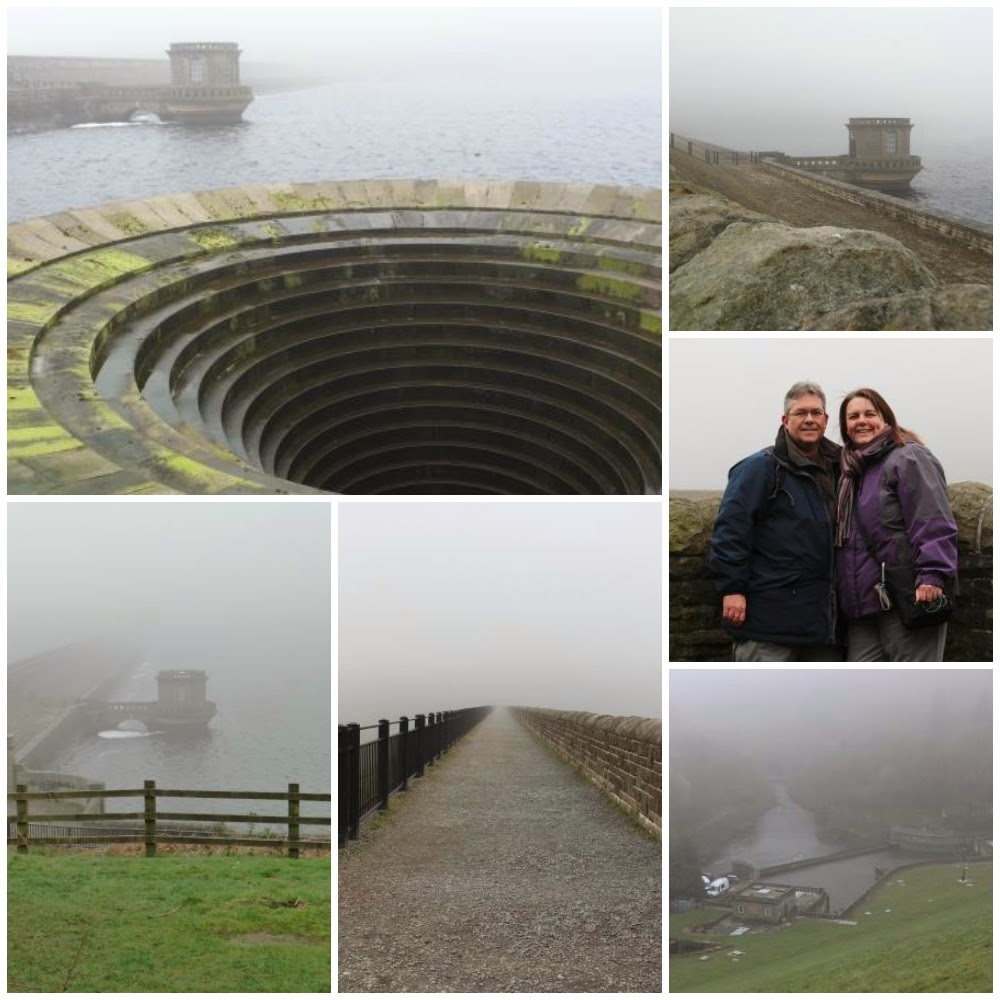 We made it safe and sound to the Dam, parked up, got all the winter gear on as we were really high up and the wind was chilling today.  We took the short walk to the Dam and though it was still really misty and visibility was poor we did manage to take a few pictures, but will definitely need a return visit on a better day to see it in It's full glory.

Before leaving the Dam there was just one Geocache that we need to bag. Typically it was down a very steep path at the base of the Dam but we decided it was worth the effort and did what we needed to do.

The cache was in the bag and it was time to head back to the car.  Quick check of Google told us that the Castleton chippy was open so we headed there for the best battered scampi and chips ever.  We'd been introduced to this chippy a couple of years ago on a get together with friends.  It's hidden way in the back streets and unless you know it's there you would never stumble across it.

With the taste for the best battered scampi and chips ever we made our way to Castleton and managed to find a parking space.  We walked though the village towards the chippy, we could almost take the scampi.  As we approached the chippy there were a group of young school children waiting outside so we thought we were going to have a bit of a wait - though I don't remember ever going to the chippy when I went on a school trip.

It was worse than that.  After all that anticipation and me doing some homework the chippy was shut, disaster!  We were both gutted, we were starving and the only thing was going to hit the spot was those scampi and chips.

Dejected, hungry and tired we decided to head back to Gooseberry Barn to raid the snack cupboard and hope that we didn't spoil our tea.

When we arrived it seemed that the fog was just as bad as it was when we'd left, so we'd definitely done the right thing in going a bit further afield.

It wasn't quite so cosy to come back to today as Martin had whacked the underfloor heating right down, so we could light the log burner for one last time on our last night.

Day 8 - Friday
It was time to leave Gooseberry Barn and head back home today.  We needed to be packed up and out by 10.00am.  We'd done a bit of packing the previous night to get us started and were away in good time.

As we pretty much had to pass Hardwick Hall on the way home we had decided that we would make a 4th visit to the restaurant come cafe for breakfast and, if the weather was brighter, we would try and take some more pictures for the album, everything always looks better with a blue sky and I just don't believe photoshop is the same, it just doesn't seem honest.
Posted by Carol at 09:05

Email ThisBlogThis!Share to TwitterShare to FacebookShare to Pinterest
Labels: Beautiful Britain, Derbyshire, Geocaching, Holmesfield, Ladybower Dam, Life of Pottering, Out and About, The Peak District