My last post ended with Will camped in Bulford Fields, on Salisbury Plain, with 'C' Squadron of the Queen's Own Yorkshire Dragoons (QOYD).

As we have no personal war diary for Will for this period, we have obtained a copy of 'C' Squadron's official War Diary.  Whilst this diary gives an account of the Squadron's first trip to France it is quite general, with not much detail.  I have tried to summarise the content, with occasional quotes extracted, to give a picture of the kind of activities that the Squadron were involved in during their first time in France.

The diary starts with:


" June 26, 2015 - Arrived at BULFORD from SCARBORO to act as Divisional Cavalry to the 19th Division as per War Office orders"

"The Squadron encamped in BULFORD FIELDS and remained there till July 19th equipping and preparing for service abroad."


"One half Squadron under MAJOR J L INGHAM entrained for SOUTHAMPTON and embarked on the 'HUANCHACO' for HAVRE."

"The remaining half Squadron under CAPTN R THOMPSON entrained for SOUTHAMPTON and embarked on the 'KYEBASSA' for HAVRE."

Could this be the 'Huanchaco' referred to in the Squadron's war diary? 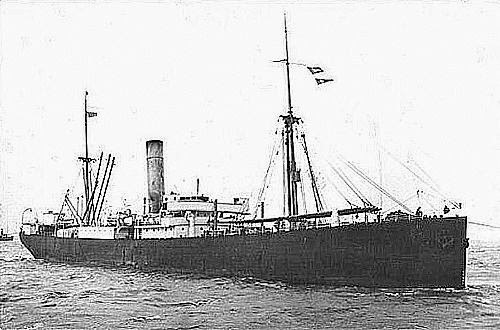 I have been unable to find any pictures of the Chyebassa, but it seems she may have been the 2nd ship of this name owned by the British India Steam Navigation Company.  If this is the ship mentioned, she was launched in 1907 and scrapped in Italy in 1938.

The Squadron had a smooth sea crossing to Havre.  This was the start of a long journey for the men.
This is where they stayed until 30th July.  The Squadron had been travelling, on foot, by boat and by train for six days.

There is no detail in the war diary as to what the Squadron did, whilst in Manqueville, but on 30th July they marched to Beaupre, where they billeted in a field until 3rd August when they marched again.  This time to Regnier le Clerc, again billeting in a field, before marching again, on 5th August, to Le Vert Bois.

They stayed here until 30th August. Whilst at Le Vert Bois a number of guard duties were undertaken.

We have a number of postcards, which we believe Will sent to Ethel during this first visit to France, though we can not be certain at what point there were sent.  They are part of a collection and can be seen below: 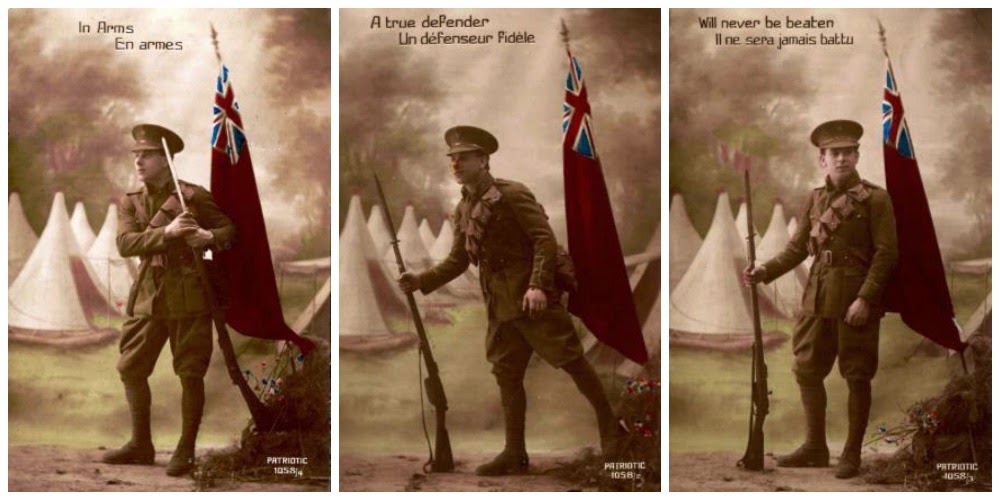 On 30th August the Squadron were on the move again. They marched to Quentin and were billeted here until 25th September. Whilst in Quentin it appears the majority of activity undertaken was working on drainage operations and communications trenches.

On 25th September the Squadron marched to billets near Locon.  Whilst here they:


"Received instructions re 'Clearing of Battlefield'.  Medical arrangements made for the evacuation of wounded at 2 advanced stations.  Four main dressing stations also established.  The following general arrangements were made - The Divisional Squadron, the Divisional Cyclists, assisted by the Salvage Corps to perform all duties in connection with - I - Disposal of prisoners, II - Burial of dead, III - Collection & disposal of war material, until they are required as mounted troops for the advance."

On 3rd October the Squadron were on the move again and marched back to billets at Quentin.  They worked on clearing waterways in the rear of the British lines.  The weather was fine and the ditch was dry.

They moved on again, to billets near La Bassee Canal, on 20th October, where they commenced work on clearing more waterways. The weather was now becoming very wet. Whilst here they also commenced building stables for horses.

For the majority of November the Squadron continued drainage work, though the weather was making things increasingly difficult, with water 3 feet deep in many places.

On 9th November it seems that some of the Squadron were caught in enemy fire:


"A party of men returning from SHETLAND ROAD were caught by hostile & shrapnel fire in the RUE DE BOIS.  One Sergeant was wounded.  This was the only casualty."

Towards the end of the month it seems that the drainage work stopped and the men concentrated on exercising & cleaning horses' saddlery for a few days, before receiving orders to march into the
reserve area, where they built new shelters for the horses and conducted a programme of training exercises.

Early in December the Squadron received orders to march to Paradis. Owing to the rain and the wet weather a number of the roads were under water. The Squadron spent December clearing out drains and dykes, exercising the horses and improving the billets.


"Arrangements made for Xmas dinner for the troops."

The list of Will's whereabouts in his own personal diary states: 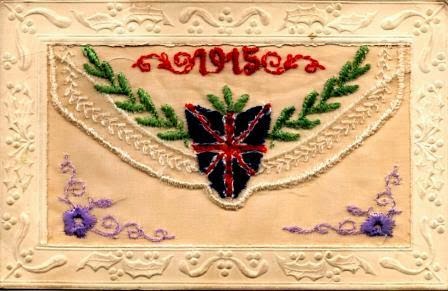 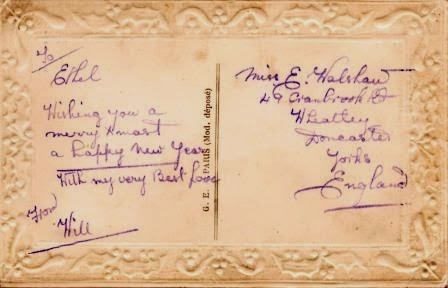 This is a lace card that we found in Peggy's collection of Will's WW1 mementos.  It was sent to Ethel, Will's sweetheart, for Christmas 1915.

You can see on the reverse of the card that Will doesn't refer to the war or his situation at all.  He just wishes Ethel a 'Merry Xmas & a Happy New Year - with my very best love' 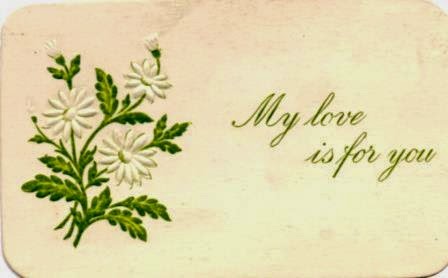 The small card on the right was inserted in the flap of the above lace card.  The flap lifts at the bottom of the Union Jack. 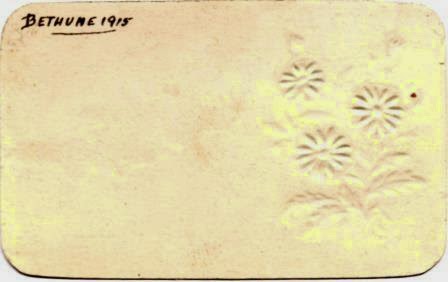 I would guess that the name and date on the reverse 'Bethune 1915' refer to the village and the date the card was made.

It seems that, on Boxing Day, the horses were inoculated with Mallein, by the Veterinary Officer, with no adverse reaction.  The Mallein test is a specific clinical test for glanders, which is a bacterial disease which used to be common in horses, which is contagious for humans.  The acute form results in coughing, fever and the release of an infectious nasal discharge, followed by septicaemia and death within days.  I'm guessing there was relief amongst the camp that the horses were disease free.  Glanders is still a notifiable disease in the UK, although it has not been reported in this country since 1928.

At the end of December the diary tells us that bi-weekly practices were instigated for all ranks with their new 'tube helmets', which were worn by troops in WW1 to protect against chlorine, phosgene & tear gases.

During January of 1916 the Squadron completed a number of activities including:

At the end of January the Squadron marched to new billets at La Haye, which had been vacated by the Royal Wiltshire Yeomanry, where they commenced a further programme of training.

In February the Squadron were instructed to patrol the roads at La Sart, in the vicinity of the rifle range. They also took part in a number of 'schemes' and a further programme of training, before moving onto fresh billets near La Gorgue, which had been vacated by the Household Cavalry.

Whilst at La Gorgue they completed further wire surveys and searches of local buildings for Government stores.  They also provided working parties each day, for the majority of March, to load wagons & convoy these to the forward area, where they were unloaded.

For the latter part of March, the Squadron were responsible for building breastworks at Pont Logy, where one man received a slight bullet wound in his wrist.

The weather for the month of March was changeable at first, including snow, but fine and warm later.

It was much of the same for April, until the Squadron received instructions to move into rest billets at La Haye.

On 19th April the Squadron left La Haye and marched to St Quentin.  They left St Quentin on 21st April and marched to Fressin to undergo a course of training, which lasted till the end of the month.

"9th May - according to instructions the Squadron proceeded to HAZEBROUCK where the Regiment was assembling to act as Cavalry to II Corps under re-distribution scheme."

This is where the war diary ends.  We can not be sure as to how what happened next came about, but Will's list of whereabouts states that he left France for England on 5th June, 1916.