Caching in the Autumn

We have been very good in September and managed to get a couple of Saturdays out for some nice walks and a spot of caching.

Caching in the Autumn can be a bit of a lottery, you never know whether you are going to get bright sunshiny days or grey mist and rain and we've had a mixture of both. 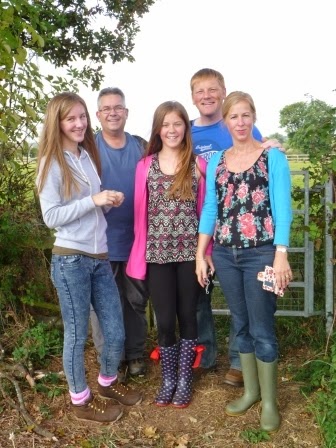 Our first foray was with our good friends Jo and Steve and their two girls, Hannah and Megan, known in the caching fraternity as The four Rocks.

We have fallen into the very nice habit of meeting up every two or three months for a bit of a walk, a bit of caching, a good old chat and either a spot of lunch or tea and cake.

This time we met up near Upper Longdon, a small village not that far away. We parked up and headed out for a walk of about 3.5 miles, with 23 caches to find along the way.

We had the perfect Autumn weather for our walk, with bright blue skies and warm sunshine. Oh yes, there was also a very conveniently placed pub about half way round. 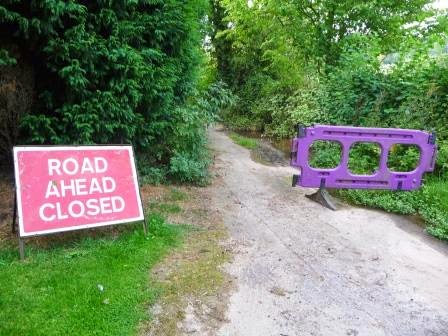 The walk started off on, what is marked on the OS map as a minor road, but it was most definitely not accessible to traffic today, nor could we see how it ever could be, not without a lot of verge clearing anyway.

I got the chance to sample some very tasty damsons along here, though no one else fancied giving them a try. It was a bit early in in our walk to be collecting a bag full, though I had come prepared, so there would be no damson jam for us.

The walk took us on public footpaths across open fields, which luckily had recently been ploughed so, although the going was pretty heavy under foot, we weren't up to our necks in crops, and we could see where we were going. 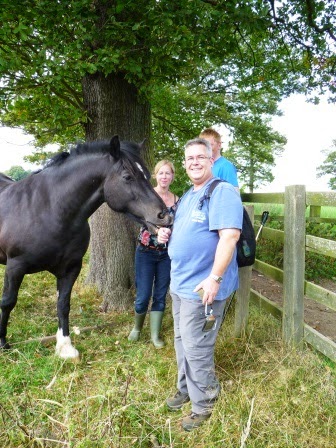 Part way round we were followed across a couple of fields by a very friendly horse, who was convinced that there must be something tasty in Martin's caching bag. 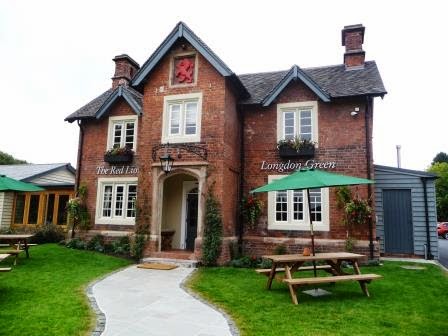 We left him behind and were definitely ready for a comfort break when we spied the local pub, which had just reopened following a major refurbishment. It was a lovely looking pub and we sat outside in the sunshine to have our lunch, which we could only describe as average, which was a bit disappointing, considering how lovely the pub was. Hey oh, we still had a very enjoyable chill out in the sunshine before continuing on with the rest of our walk. 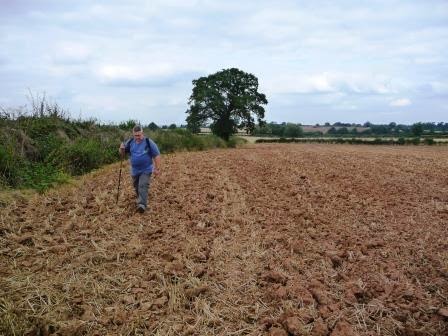 The second half of the walk was a bit more hard work than the first. One of the fields we walked through had been ploughed right up to the edge and it was very hard going walking over the uneven ground. 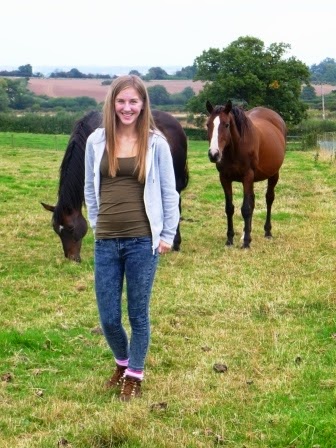 Towards the end of the walk we picked up some more horsey friends.

We eventually ended up back where we'd started with 22 out of the 23 caches found, to say good bye until the next time.

Our second trip out was actually to the village of Longdon, not far away from Upper Longdon. It never ceases to amaze us as to what you can find on your own door step.

This time we were taking mum with us, known in the caching world as 'Er of Meand'Er. Dad's known as the Me part, but he was more interested in watching the football than coming out walking.

This time it was a pretty short walk, just over a mile, but as we didn't have very long, it was just the job. We were due to pick mum up at 11.30. Looking at the weather forecast we had thunderstorms forecast for 11.00, then cloudy for the rest of the day, so we were hoping we would miss the worst of the rain.

As we were almost passing the cache that we hadn't been able to find the previous week, we were going to give it another go. Mum had previously found this one and we were hoping she would be able to point us in the right direction.

We set out as planned and started off with a yomp through a pretty muddy field in light drizzle, to pick up the cache we had missed on last week's foray. Combining mum's memory of where she thought it was and the limited information that we had, we soon managed to find it, which was great, as we hate a DNF (did not find!). 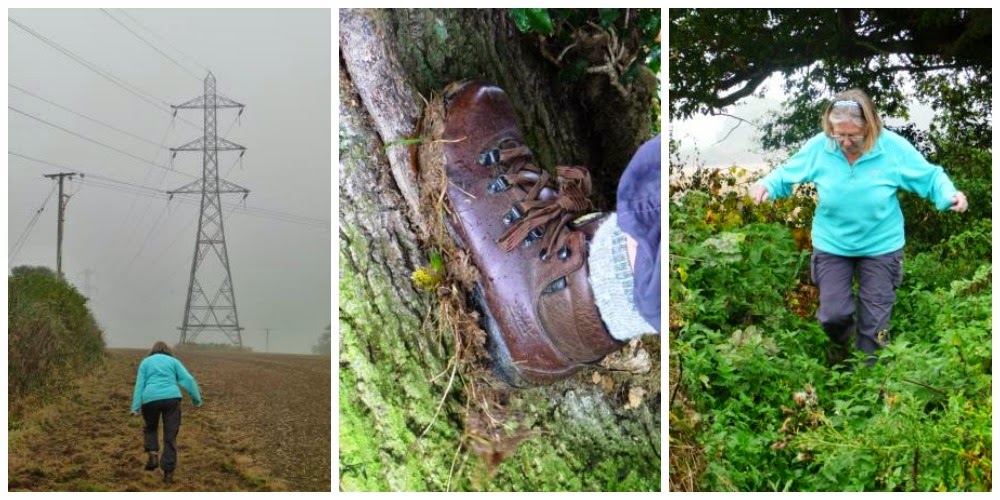 We then all spent a good while cleaning our boots off before being allowed back in the caching wagon, before heading off to begin the other series that was on the agenda for today.

We had read through the details of the other caches we were going to be looking for and could see that one involved a tree climb, that would definitely be one for mum. I know she may be 71, but she's far better equipped for climbing than either Martin or I. We would hold the bags and guide her back down. 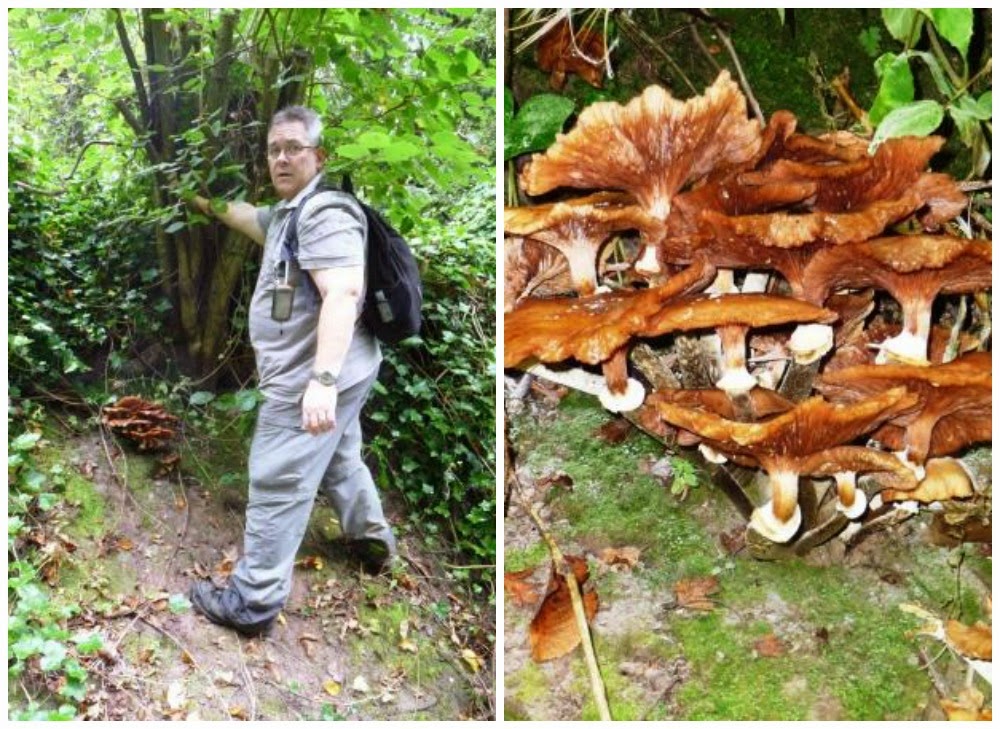 We parked up by a pretty little church and headed out.  The first one was no mean feat to pick up.  It was up a pretty steep and muddy bank. Martin hung on to the ivy to drag himself up, whilst mum and I admired the very impressive fungi close by. 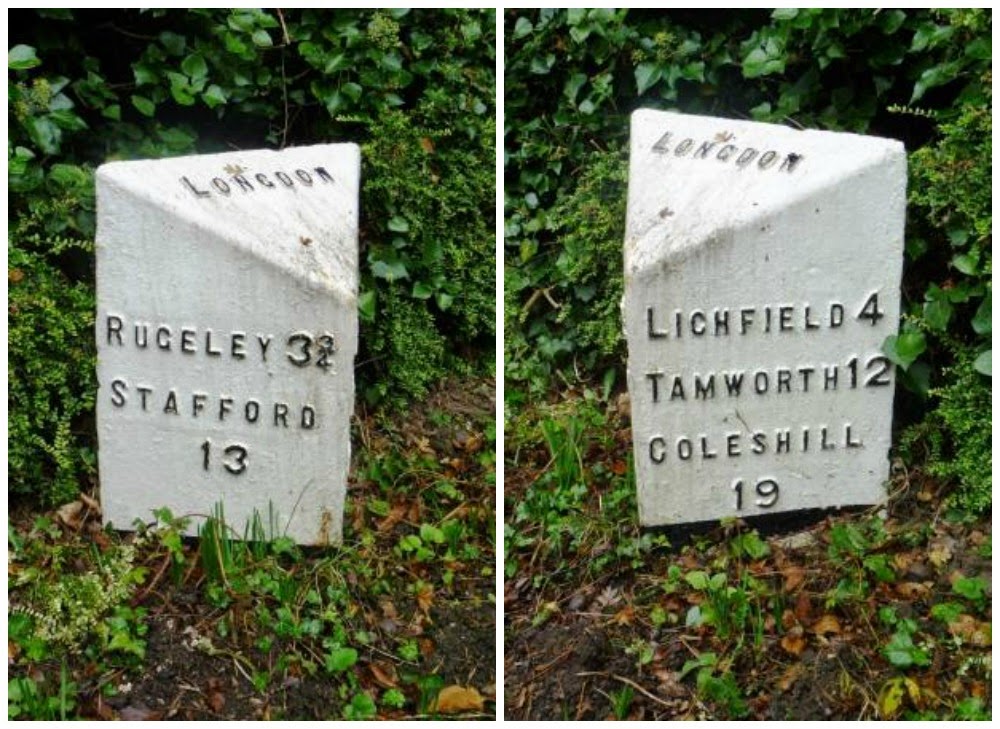 Longdon is one of those villages that I've driven by hundreds of times, but have never pulled off the main road to have a look.  It was a lovely little village with some beautiful houses.

There was one up for sale but, even without looking, I'm pretty certain it will have been way out of our price range.

The second cache was a nice and easy one and we made our way on to the third.  Mmmmmm, down there, really!! We made our way along a very overgrown footpath, with very wet, waist high grass and undergrowth all the way.  By the time we got to where we needed to be we were all wet through up to the waists.  The perils of caching in the Autumn! We found what we were looking for though so it was worth it. 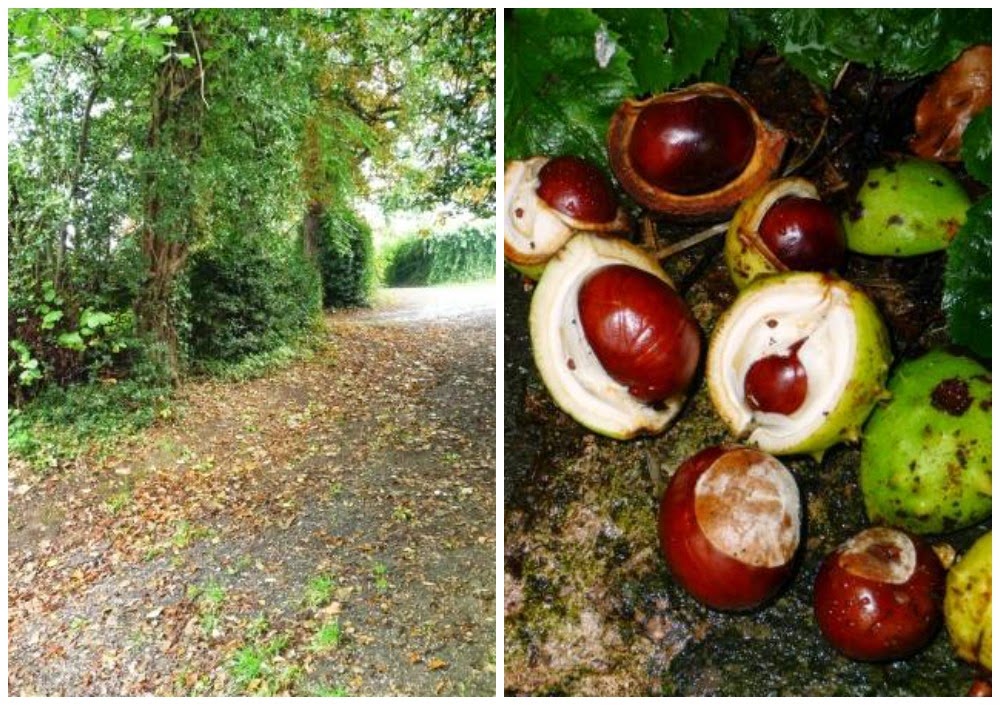 We picked up one more cache before arriving at the 'tree climb', passing lots of signs of early Autumn on the way. 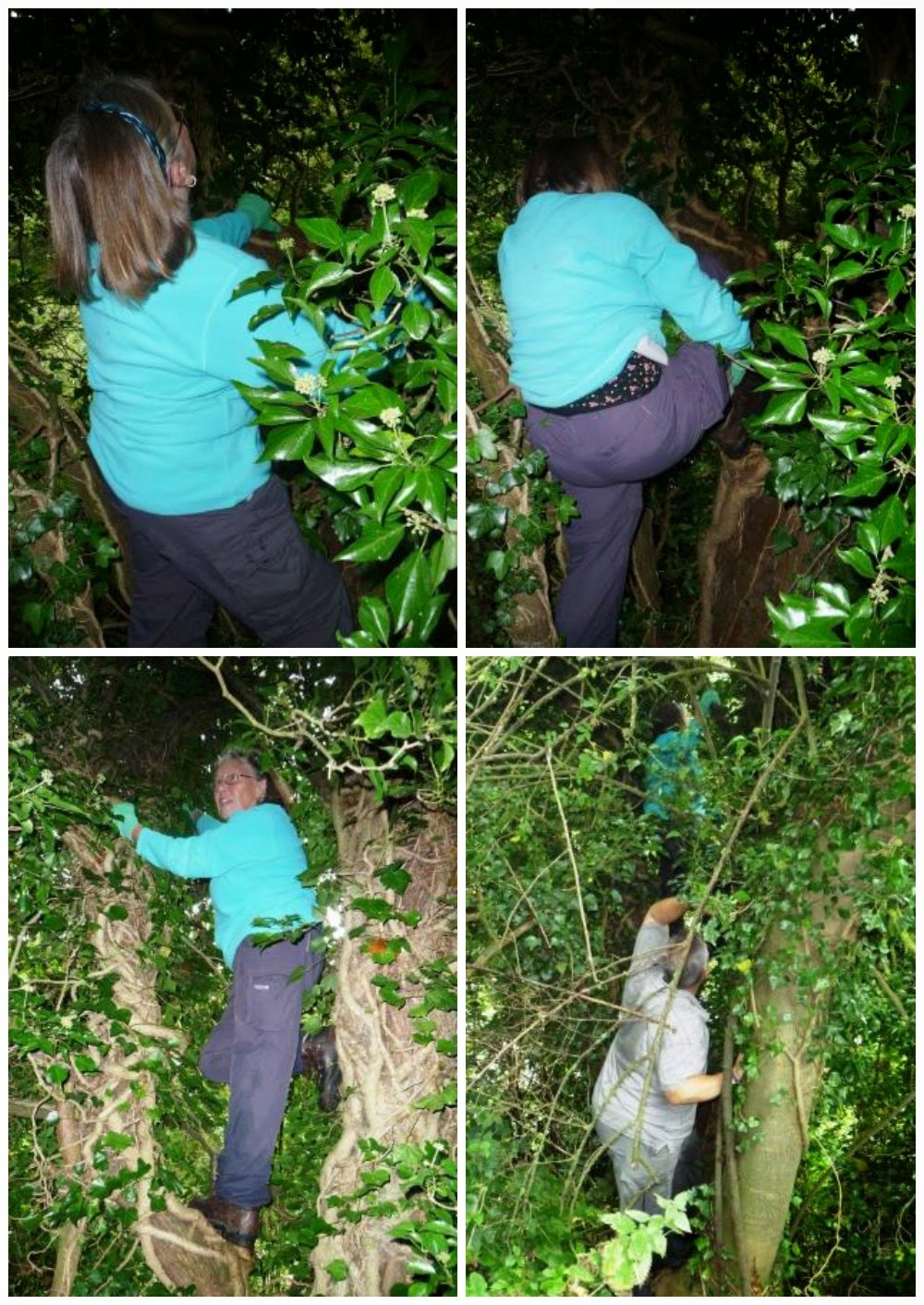 This one was definitely for mum and she was well up for it. It started out quite safely, but as mum went higher and then higher and then higher again, our hearts were in our mouths. It wasn't so much the height in the tree that she was that was worrying us, but the height of the drop on the other side of the tree - if she went down there we would have a job explaining what we were up to to the ambulance service, when we called them out.

Fortunately there was no need to call on the emergency services and, after a good while, mum spotted what she needed. She then found out that her pen didn't work, so we had to send another up attached to the walking pole.


Soon she was safely back on the ground and we were on our way again. 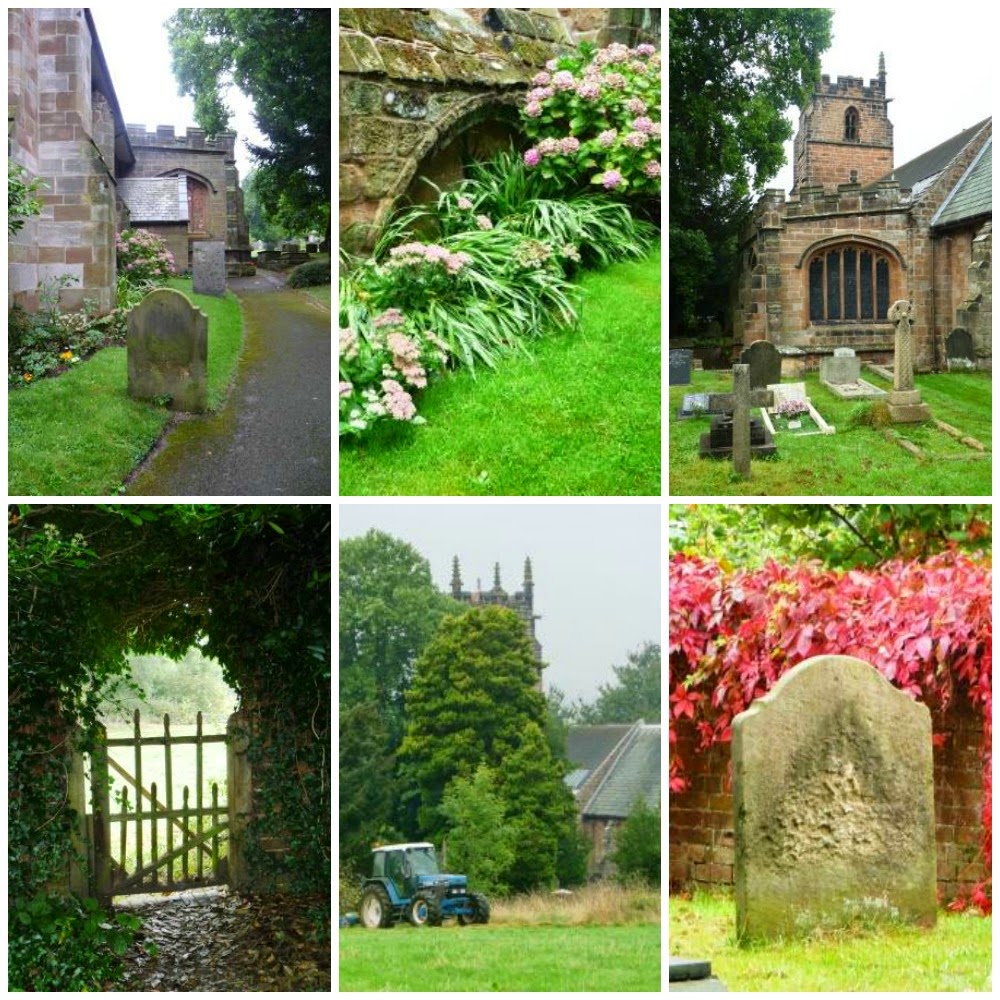 So much for a nice easy walk, we were all wet, dirty and shattered, but at least we'd no sign of thunderstorms or real rain.

Email ThisBlogThis!Share to TwitterShare to FacebookShare to Pinterest
Labels: Beautiful Britain, Geocaching, Life of Pottering, Out and About, Staffordshire