Following Will's  stay in Graylingwell war hospital, with Pyrexia, and his short posting to Sunderland during the Spring of 1917, June finds him on his third posting to France, where he was assigned to the 6th Battalion of the York & Lancaster Regiment.

The entries in Will's personal diary for 1917 are a little jumbled in places and I have found entries dated for the month of June in three or four different places.  It doesn't help that the diary appears to have been bound with pages out of order.  I have tried to order the entries as best I can.

The diary shows Will leaving Sunderland on 9 June for the BEF (British Expeditionary Force) at 5.30pm, getting to Folkstone at 6.15am,  He says he was very tired and downhearted with seeing the look on Ethel's face.  They left Folkstone at 5.00pm, Will writes that the boat was rocky and they were ordered to wear life belts. 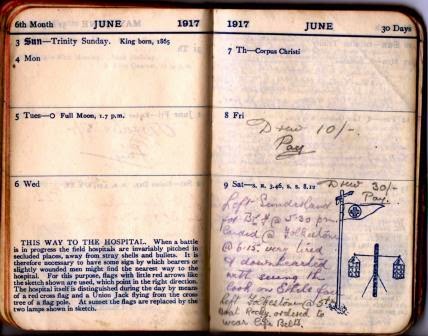 Will's account of his first week on his third posting to France can be seen below.  As the writing is small and quite difficult to read I have also provided a transcript, as best I can, but thought it important to show the actual diary pages. 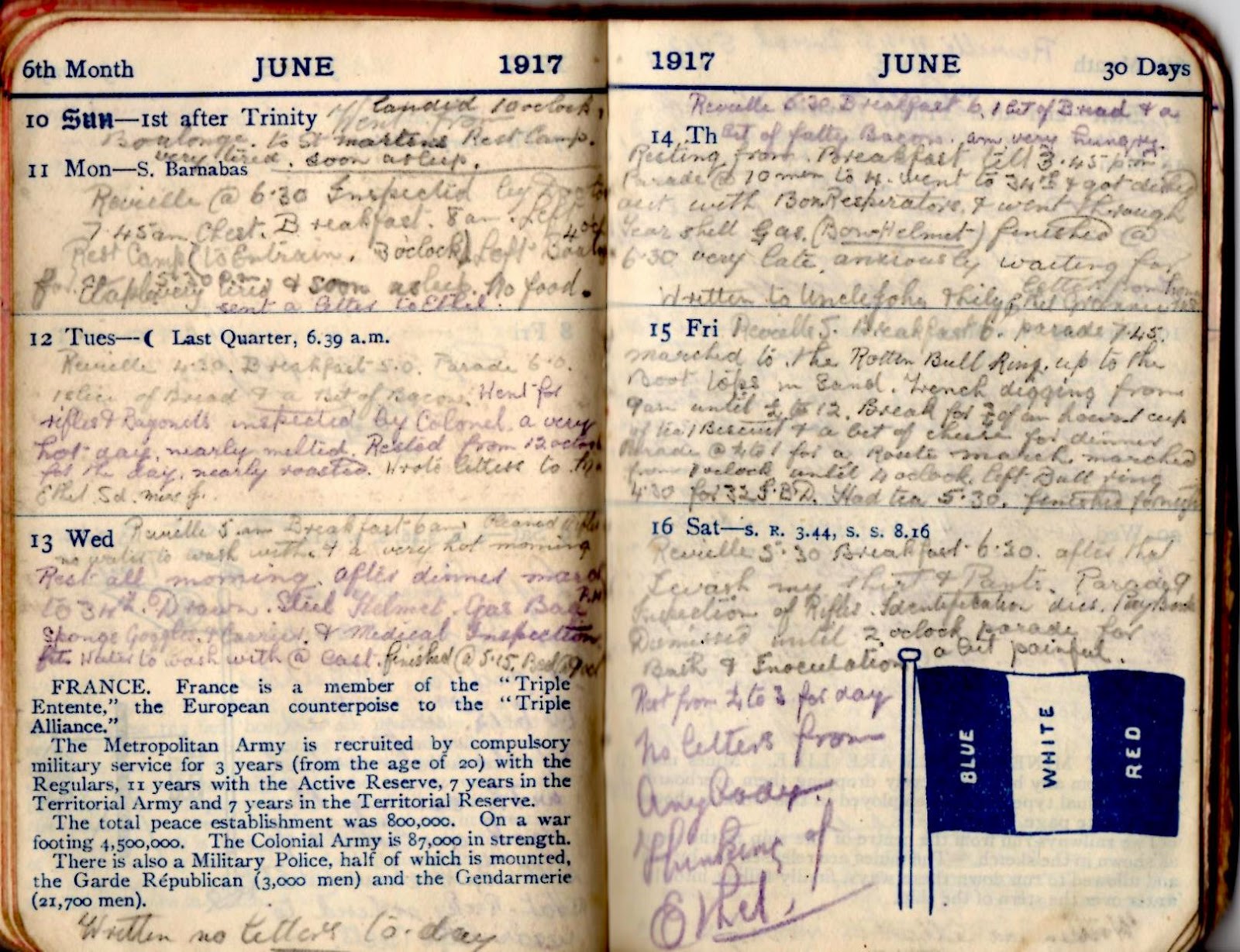 "16 Sat - Reveille 5.30, breakfast 6.20. After that I wash my shirt & pants. Parade 9. Inspection of rifles. Identification docs, paybook. Dismissed until 2 o’clock. Parade for bath & inoculations, a bit painful. Rest from ¼ to 3 for day. No letters from anybody. Thinking of Ethel."

According to The Long, Long Trail the abbreviation IBD appears in virtually every infantryman's service record, yet little is documented about them. An IBD, Infantry Base Depot, was a holding camp. Situated within easy distance of one the Channel ports, it received men on arrival from England and kept them in training while they were awaiting posting to a unit at the front.

At this time Étaples, about 15 miles (24 km) south of Boulogne-sur-Mer, was a small town with a thriving fishing industry and a fleet of sailing trawlers, a few miles up the river Canche.  It attracted painters from the USA, Canada, and Australia before it became part of an enormous army complex that stretched all along the Channel coast.

On the other side of the river was the smart beach resort known officially as Le Touquet-Paris-Plage, and unofficially as either Le Touquet or Paris-Plage. Le Touquet was in effect officers' territory, and pickets were stationed on the bridge over the Canche to enforce the separation.

Etaples was a particularly notorious base camp for those on their way to the front. Under atrocious conditions, both raw recruits and battle-weary veterans were subjected to intensive training in gas warfare and bayonet drill, and long sessions of marching at the double across the dunes. After two weeks, many of the wounded would rather return to the front with unhealed wounds than remain at Étaples.

The Etaples Bull-Rng was situated on sand flats and dunes near the main part of the British army camp at Etaples. it was the main centre in France for the final training of British troops before they went up to the front. “Etaples was hell”, said a soldier, “everything was done at the double and ferocious redcaps lurked in every corner." The instructors - who wore yellow armbands - were known as 'canaries' and put their charges through two weeks of intensive training which lasted from early morning until sunset.

It is said that one Sunday afternoon, in September 1917, after a summer of discontent, events boiled over at Etaples. A corporal was shot and killed by a redcap after an angry crowd had gathered over the arrest of a gunner. By evening the trouble had escalated into a mutiny. Hundreds of angry soldiers chased the military police who fled into the town. Sporadic demonstrations occurred at various points around the camp, and over a thousand soldiers defied orders and broke out. It was not until several days later that the ’mutiny’ was brought under control · by the presence of cavalry with machine guns in support.

The context of Etaples and The Bull Ring cannot be better described than by poet/soldier Wilfred Owen, resting in Etaples on his way to the line:

"I thought of the very strange look on all the faces in that camp; an incomprehensible look, which a man will never see in England; nor can it be seen in any battle but only in Etaples. It was not despair, or terror, it was more terrible than terror, for it was a blindfold look and without expression, like a dead rabbit’s." 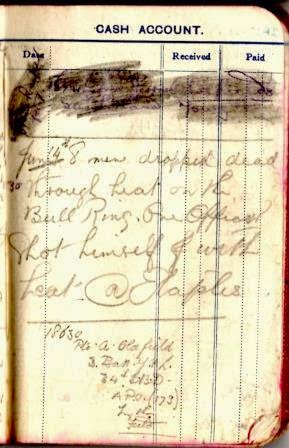 One of the most shocking entries that we have found in Will's diaries so far is an entry that has just been written at the back of the diary on one of the blank pages.  It can be seen here.


"June 14th - 8 men dropped dead through heat on the Bull Ring.  One Officer shot himself with heat @ Etaples."

This was dated 14 June, just a few days after Will had arrived at Etaples.  What would become of Will during his time here?

In addition to Will's account of his first week at Etaples shown above, there are a number of 'memoranda' pages at the beginning of his 1917 diary.  Between 11 & 29 June, just after landing at Etaples, Will has written his most private thoughts of Ethel.  Reading these very first pages of Will's diaries really touched our hearts and it was this that inspired us to find out more about Will and to tell his story.  His words were so full of emotion and completely unexpected that we really needed to find out more.

You will be able to read Will's deepest thoughts of his sweetheart, Ethel, in my next post.
Posted by Carol at 16:03