We had a bit of an adventure planned for Wednesday.  A bit more caching on the moors, starting with, you've guessed it, another Church Micro.

This time we were starting off at another pretty little village called Buckland-in-the-Moor. This was a very small, but lovely little church with a very unusual clock face, in that it didn't have numbers, it had letters that spelled out the words 'my dear mother'.

I love how we always find something really interesting in all of the churches that we visit.  This time, inside there were five telegrams to and from royalty on display. Two from King George (well, his secretary) thanking the parishioners for the messages they had sent with their good wishes on his Coronation and his Silver Jubilee and three from Queen Elizabeth, again thanking the parishioners for their good wishes on her Coronations, Silver and Golden Jubilees.

We found the information we needed from the graves in the churchyard before working out where the cache was hidden and making our way across the moors to try and find a cache called 'over or under'.

We were quite excited about this one as we needed to find two sets of numbers, one was to be found 'over' and one 'under'. There was a warning that the one under would involve getting wet.

At the coordinates there was a little bridge over a river and we were well equipped with boots and towels so were really looking forward to the challenge.

We decided we'd try and find the over clue first as there was no point getting wet if we didn't have everything we needed. Well, we looked for ages, all over the bridge and surrounding area but could find nothing, so ended up having to leave this one as a did not find. We were both really disappointed.

The next one we were looking for was an Earth cache. This is one where you find a point of geological interest, perhaps take a photo of yourself there and answer some technical questions. This one was at a spot high up on the moors called Buckland Beacon, where below the beacon lie two rocks engraved with the 10 Commandments. These were commissioned in 1928 by William Whitely of Buckland Manor, who is buried in the church yard at Buckland-in-the-Moor church. You can see his grave in the above photograph.

It was about a half mile walk from the parking spot to this one and it was a lovely walk through the heather and the gorse, passing lots of cows on the way.

Whilst the writing engraved on the stone tablets was really difficult to read as it had worn over time, the views from the beacon were amazing and we spent a good while there clambering over the rocks, taking photos and having lunch, well and pork pie and a Topic, washed down with blackcurrant squash. It was just the job. 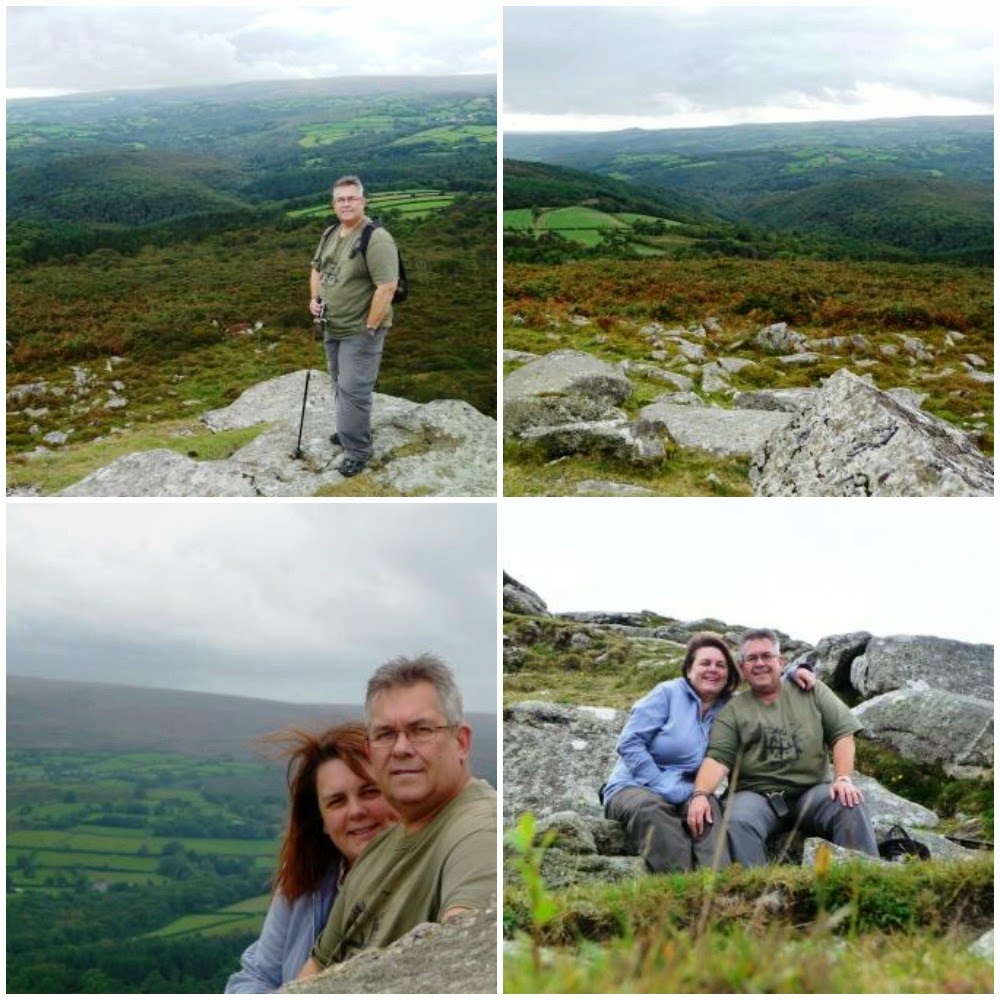 Then it was a wander back to the car to head back to Moorbrook Cottage wondering whether any more would have been done to the face in the wall. Well, we were delighted to see that the farmer was actually there just about to put the last two stones in along the hair line, so we couldn't resist pulling in to say hello and how much we loved what he'd done. 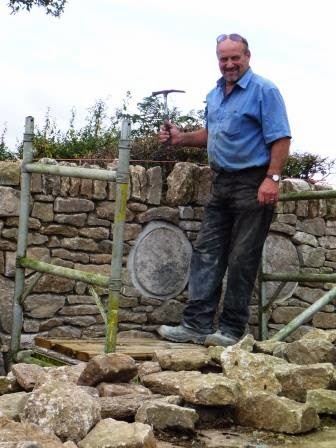 He explained that he'd had a great year, the weather had been kind and he was really happy and wanted to express that. He'd had to rebuild the wall anyway and just had the inspiration to do something a bit different. He had done it all himself, cutting the mouth and the eyes, everything.

He said it would be finished by Friday so we said we'd definitely be back to take more pictures of it finished before we headed back home.

He was really chuffed that we'd stopped for a chat, and was delighted that it had made us smile and was happy to pose for a picture before we headed off.
Posted by Carol at 17:05

Email ThisBlogThis!Share to TwitterShare to FacebookShare to Pinterest
Labels: Beautiful Britain, Dartmoor, Devon, Geocaching, Life of Pottering, Out and About