On Friday we decided we would do a bit of exploring on the moors.

We picked up a cache on our way to Widecombe. The cache owner had put a note on the cache page stating that the local farmer was completing some work at the cache site so it may not be possible to do. When we arrived, there was clear evidence of work under way, lots of cows lolling about on the verge, but no one around, so we managed to pick this one up nice and easily.

We were really intrigued by the work that was under way and made a number of return visits during our holiday to photograph the progress.  We were so impressed, and surprised, with what the farmer was doing, that I felt it was worthy of a blog post of its own, so you can read more about it here.

We carried on to Widecombe, where sadly we couldn't visit the Church House, as it was in use by the local nursery and is only available for visits by National Trust members when not in use by the local community. We would have to try and come back another time.

All was not lost, as we also had a Church Micro cache on the agenda. Church Micros are a series of caches all based around, funnily enough, churches.  We really like them as we love looking round pretty churches and finding out a bit of local history.  The Church Micro in Widecome is a Multi-cache, so we had to have a good wander around the church and church yard, looking for clues as to the final hiding place for the cache.

We started off inside the church, looking for a model of the legendary old grey mare and her riders, on their way to Widecombe fair.  We needed to find some numbers from the information plaque. We found the model but before we had finished collecting the numbers we needed, we were interrupted by a guided tour so we decided to head outside and come back a bit later after the tour had moved on.

Outside we needed to find a memorial bench, which we found easily enough to give us a bit more of what we needed.

We then needed to find the grave of Olive Katherine Parr, also known as Beatrice Chase, a local novelist. She is said to be related to Katherine Parr, wife of Henry VIII. We had a really good wander round the churchyard looking for this and, whilst we were wandering around, the tour came out of the church and the tour leader said we could go back in and enjoy the peace and quiet now they had finished!

I decided to be cheeky and asked if they knew where I could find Olive's grave. They were very happy to help and actually took me to the spot, so that was a bit more of what we needed under our belts.

We then headed back in the church to finish what we had started and we soon had the final co-ordinates, which led us to the final cache location and a very unusual cache container.

From Widecombe we headed for Castle Drogo, calling in at Moretonhamstead on the way to pick up another Church Micro. For this one we had to find information on three different graves before being able to work out the final cache location.

There was some work going on at the top of the tower today and we even got to see workmen abseiling down, which was interesting to see to say the least. Fortunately they hadn't roped off where we needed to look.

We managed to find what we were looking for and there were some serious signs of Autumn at the final cache location.

We finally managed to wend our way to Castle Drogo.  This is one of those places that we've passed signs for, on the way to and from Cornish holidays, more times than I can remember, but it's always been a bit too far off the beaten track for a visit, so we were both really looking forward to finally getting to see it. 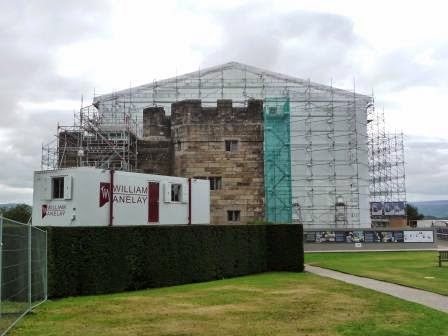 We knew that it was currently under a massive renovation programme and the castle itself is pretty much fully scaffolded, and covered on the outside, with all the beautiful treasures stored away.

First stop was the National Trust cafe for a very nice lunch and, as there was a Multi-cache set around the castle and grounds, we wanted to take a bit of time out to make a note of what we were looking for.  Well, that was our excuse, the venison sausage baguette, goats cheese and red onion toastie and treacle tart went down a treat.

We started off with a wander through the gardens and down to the castle.  All of the stonework from the roof has been removed to allow renovation to take place before being put back. There are pallets and pallets of labelled stone just waiting for renovation or return to their original site.

You are able to climb to the top of the scaffolding to view the roof in its current state, but our knees didn't feel up to this today. 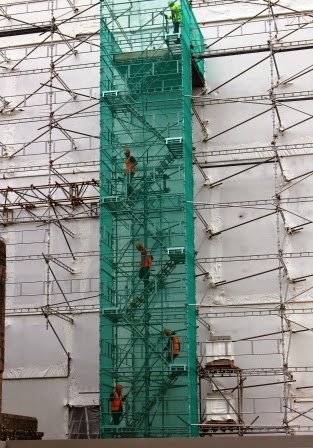 We had a really good look round the inside of the castle.  The Trust have done a really good job of keeping the castle accessible during the renovation and have made use of lots of the original letters and plans of the castle to make for a very interesting visit. It is really unusual to be able to see the bare bones of the structural make up of the building and it was really interesting to see the sheer magnitude of the task in hand.  It was also very unusual to see the mechanics that are propping up the roof whilst the work is being done! 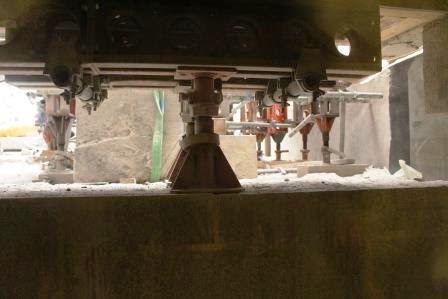 We ended up working really hard in our hunt for the cache, which had been set around the castle and the grounds.  We felt like we were being thwarted at every turn but we were not giving up. Oh no!

At the moment what you need to find for clue one is not at all visible because of the renovation work, but we were not deterred and with a bit of initiative and a very helpful Margaret we managed to find what we needed.

The second clue was nice and easy to find, the third took us a while but we got there in the end.

We were a bit surprised to see where the final cache location was, we were shattered and were hoping for a short walk back to pick up the final on the way back to the car. However, this was not to be.

When approaching the final location we weren't sure whether we were supposed to go where we needed but got the OK from a very kind gentleman who knew exactly what we were after, which bode well.

We got to the final approach, only to find that, today of all days, someone had set up a camera on a tripod and was taking automatic timed shots pointing exactly where we needed to go. Well, we didn't want to spoil the pictures, but we had worked so hard and were not going to give up.

In the end we took the long way round and managed to find what we needed without ending up being on film.

We had a really interesting visit and will definitely be back in a few years to see the castle in all it's glory when the renovations have been completed.

Email ThisBlogThis!Share to TwitterShare to FacebookShare to Pinterest
Labels: Beautiful Britain, Dartmoor, Devon, Geocaching, Life of Pottering, National Trust, Out and About