Back into the Fray

In my last post it was 9 October 1917 and Will was heading back to the front line after being on light duties for a few days following a compound fracture to his shoulder.

This turned out to have been a lucky break for Will, as the rest of the Battalion had experienced a real rough time at the front whilst Will was working safely in the stores and acting as the Orderly Corporal for the Company.

I am sure it will have been with great trepidation that Will went, by motor, to Ridgewood, to hit the front line again on 10 October.

As ever, Will's diary tells us what life was like for a soldier on the front line in WW1. 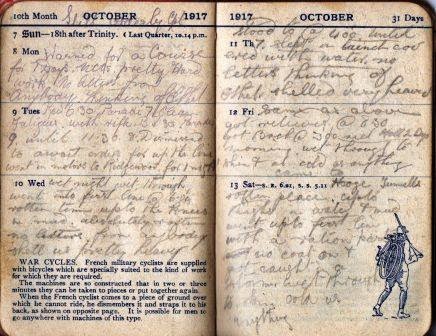 " 13 Sat - Came to Hooze Tunnels.  Rotten place.  Up to thighs in water & mud. Went up to front line with a ration party.  No coat on and got caught in a storm.  Wet through to skin.  Cold as anything."

As always, we see that, even in the worse of times, Will still managed to keep Ethel in his thoughts.

The image below is taken directly from the Battalion War Diary, which was kept in the field. Over the three day period of 11-14 October, around 10% of the Battalion were either killed or wounded. The entry is very difficult to read, so is transcribed below.

Again, it looks like our William Preston Sidney was a very lucky chap.

The following week seems to have been a particularly dramatic week for Will, with the Battalion still on the front line, followed by the slightest of respite, before heading straight back for the front line again, where Will gets lost in No Man's Land and talks of the dangers of friendly fire. 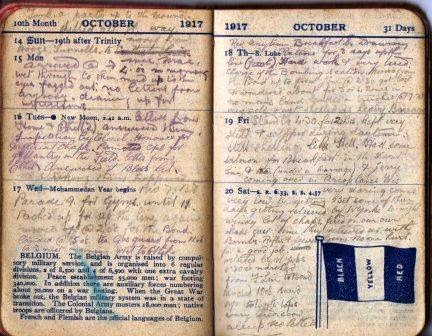 "14 Sun - Took a party up to the Mound. Shelled all the way.  Moved from Hooze Tunnels to MICMAC."

"16 Tues - Letters from home & Ethel (2).  Answered them.  Inspection by Colonel. Honours for different chaps.  Promised Cpl for gallantry in the field.  Letter from Ethel.  Answered it.  Bless her.  No striking thing happened."

"19 Fri - Stand to 4.30 for 2 hours.  Kept very still & slept during daytime.  Still shelling like Hell.  Had some salmon for breakfast in the front line & tea (under a barrage) & Jerry coming over us in aeroplanes.  His very daring comes very low.  Be getting bit some of these days."

"20 Sat - Getting relieved by W Yorks tonight.  Windy.  Lot of chaps fired on our own chaps last time they relieved us with bombs, rifles & Lewes guns.  No one hurt for a good job.  Relieved by W Yorks 6 o'c.  Marched from F line to Bund.  Landed 10 o'c. Mud up to boot tops.  Very tired.  Soon asleep.  No letters."

Compared to this couple of weeks, the rest of October was fairly uneventful, with the Battalion spending a day at the Bund before moving on to another camp at Dickebush, where part of the Battalion, including Will's Company entrained for Wozerines.

They landed on 23 October 1917 and the following week was spent on cleaning up, guard duty, rifle practice and lots of inspections,

On 28 October the Battalion war diary states that instructions were received to recall all men from leave, courses etc.  On 29 October Will writes that rumours were going round of the Battalion moving to either Egypt or Salonica.

The month ended with the Battalion marching 5 kilos on 31 October to be inspected by Field Marshal Douglas Haig, who was the Commander of the British Expeditionary Force.

So, Will is now a Corporal with the 9th Battalion of the York & Lancaster Regiment.