Beautiful Britain - The Needles, The Isle of Wight 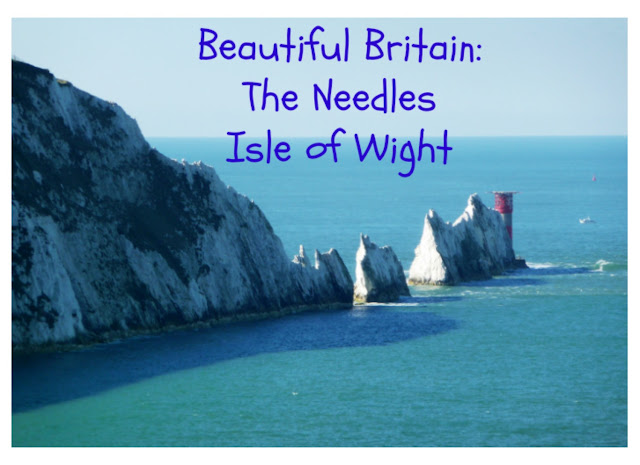 During our recent stay in The New Forest, we were staying just down the road from Lymington, and the Isle of Wight Ferries, so a day trip across The Solent was always on the cards. All we were waiting for was some sunshine!

The ferries are pretty regular and we caught one at about 10.15am on the Sunday, with plans to catch the 5.20pm back. As it turns out we both wished we'd planned for a later return as a bit more time would have been lovely.

It was a lovely day and we spent the whole of the crossing, which takes about 40 minutes, up on the deck taking in the view. 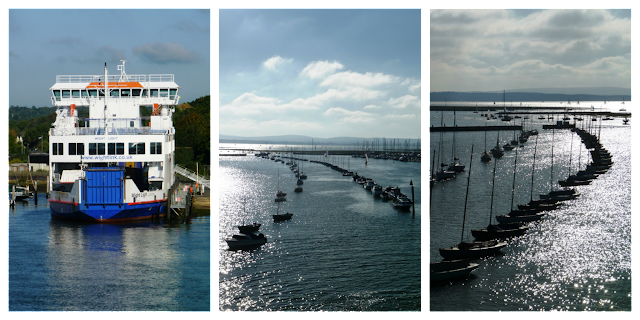 In no time at all we were docking and disembarking in Yarmouth. We were soon on our way to our first stop ... The Needles.

We had read somewhere on line that there could possibly be discounted parking costs for National Trust members, though it isn't advertised and you have to ask. We did ask and found that it was actually free, result!!

We decided we'd have a look round the craziness of The Needles Landmark Attraction before finding out the best way to visit the Batteries, which boast the best view of The Needles, though seemed just a little bit far for walking and it wasn't somewhere you could drive. 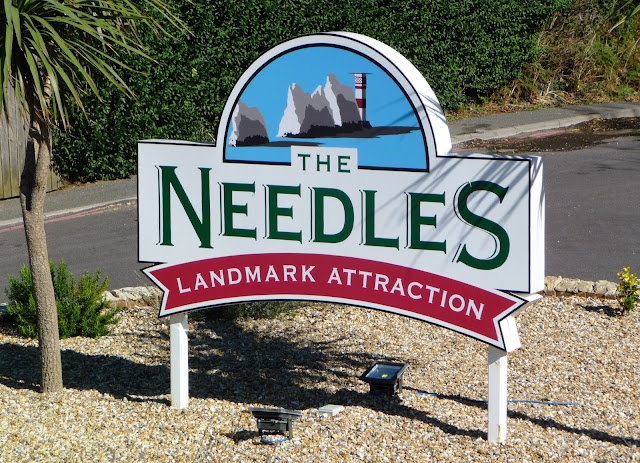 The 'Attraction' itself is a bit bonkers and full of fair ground rides and lots of people, it's a bit like Land's End in some respects. There is a cable car which takes you down to Alum Bay, but we decided against this for today. 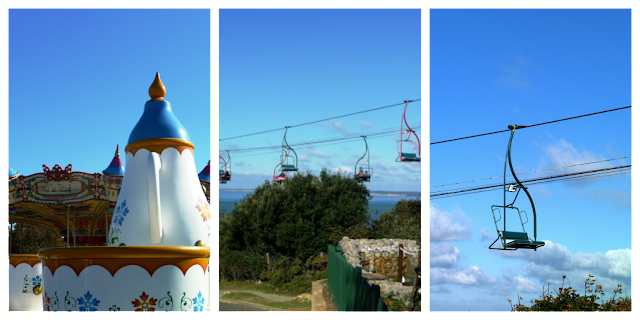 There is a good viewing point of The Needles, which was great for some decent photos. 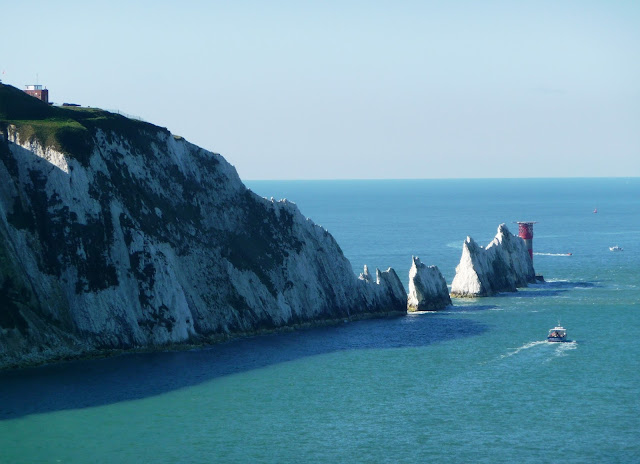 Before long we'd have enough of the commercialism of 'The Attraction' and had sussed out that we could catch the open top bus both to and from the Batteries, we even managed to get a 50% reduction for being National Trust members.

The bus takes you right up to the New Battery, giving some really good views of Alum Bay and the coloured cliffs along the way. 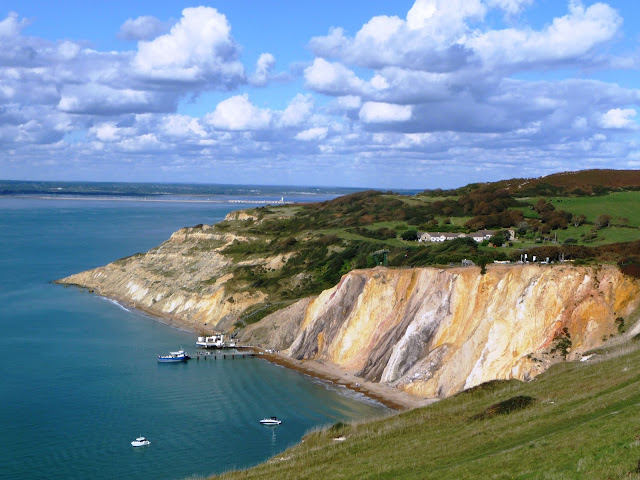 The story behind The New Battery is really interesting and came as a complete surprise to both of us. You can visit the underground rooms of the Battery and see an exhibition about the secret rocket testing which was carried out here in the 1950s and 60s. It is fascinating.

For us, this part of our visit really was all about the view and they weren't lying when they said that you could get the best view of The Needles from up here. It was just lovely. 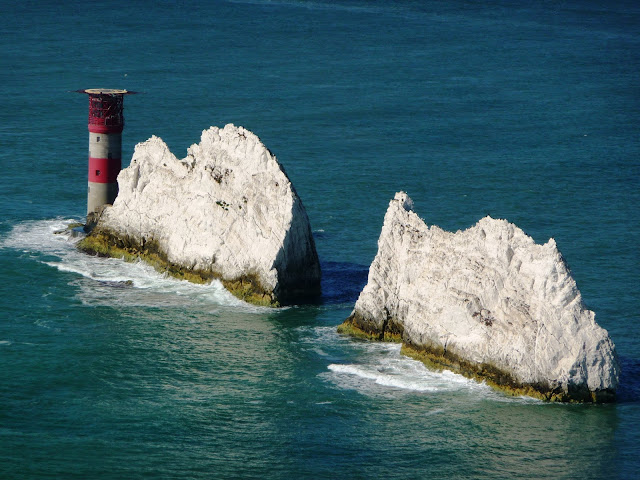 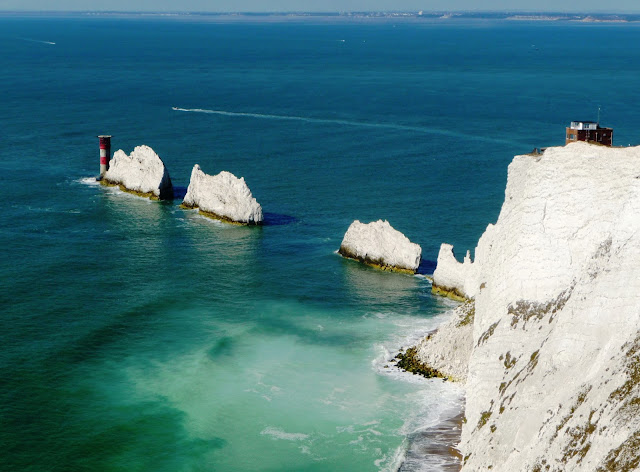 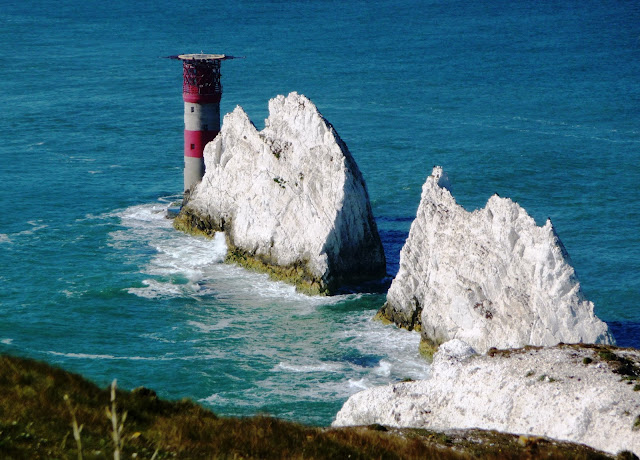 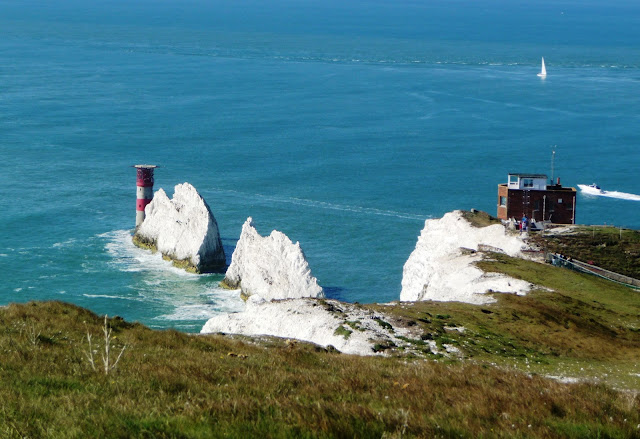 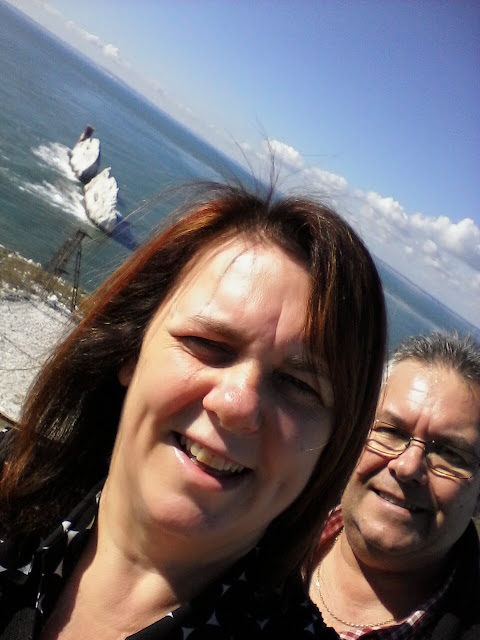 Having had a good wander around The New Battery, which is free to enter for everyone, whether a National Trust member or not, we made our way along the cliffs to The New Battery, passing more fabulous views of the chalk cliffs along the way. 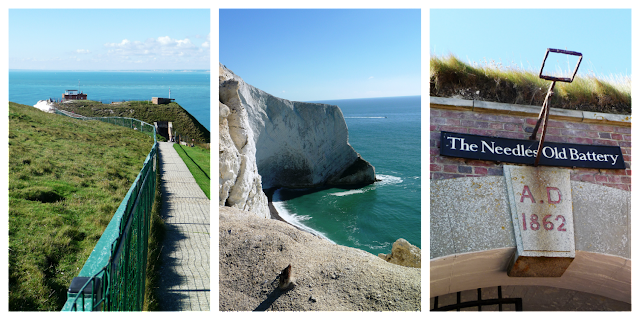 There is plenty of exploring to be had here, finding out more about the Battery's history and taking a walk down the underground tunnel for more spectacular views of The Needles. And there's a National Trust tea room - that, and sunshine, heaven on Earth. 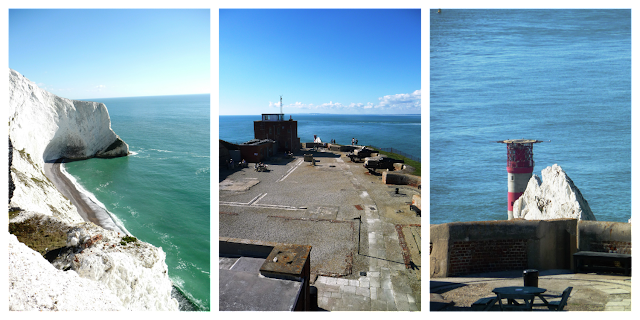 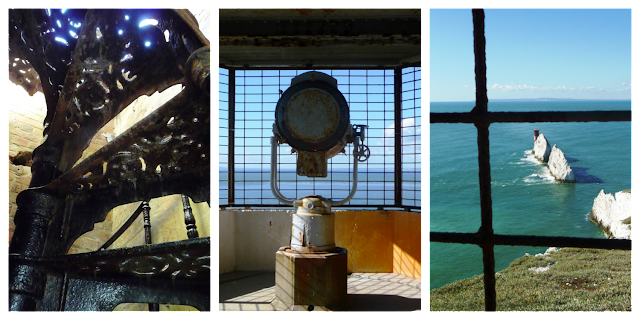 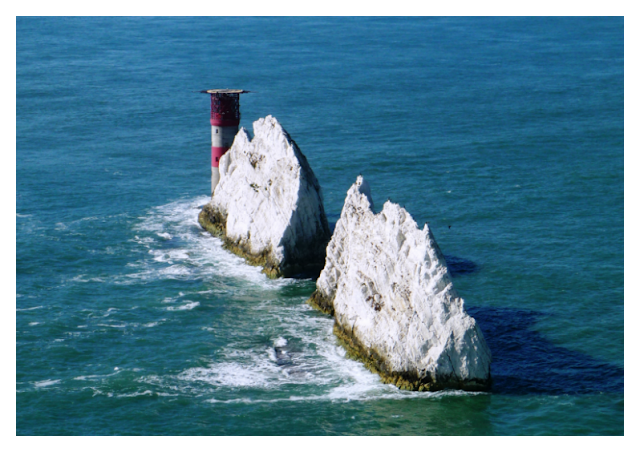 Having availed ourselves of the delights of the tea room, which we enjoyed sat in the courtyard in the sunshine, it was time to make our way back to the car.

We wandered back up to the bus stop, where it wasn't long before our ride arrived, 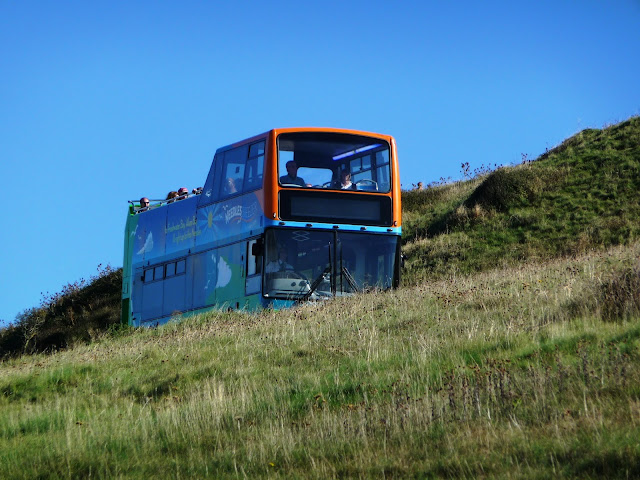 It was then but a short ride, past more amazing views, I'm sorry if it's getting boring, and back to car for us to continue on our adventure. 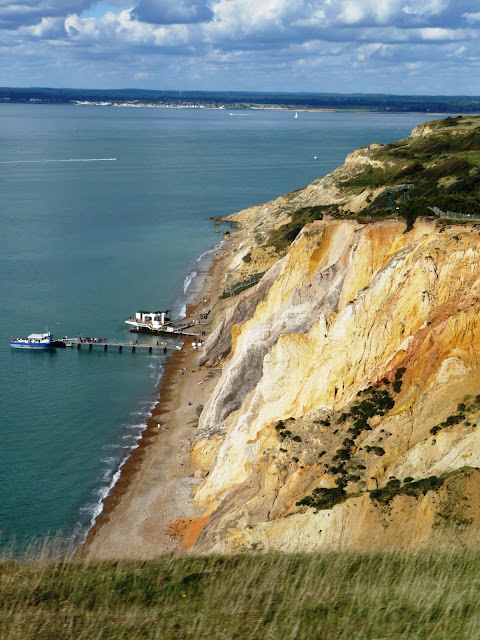 We had spent far longer at The Batteries than we had expected and, by the time we got back to the car, we only had a couple of hours before we needed to catch the ferry back to Lymington.

We decided we'd spend this time having a drive to Freshwater Bay and perhaps trying to have a very quick look at Mottistone Gardens, another National Trust property.

Freshwater Bay was beautiful, but we didn't linger, just stopping long enough to be able to take a few photos. 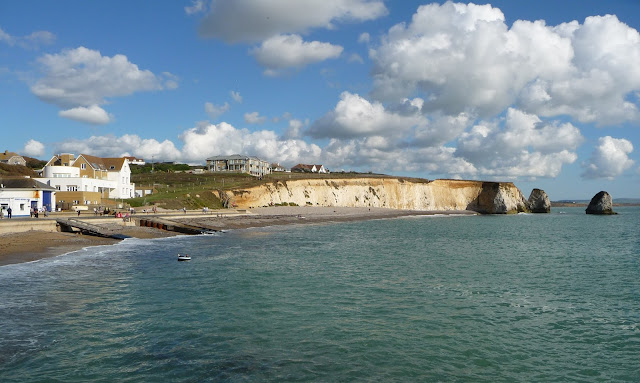 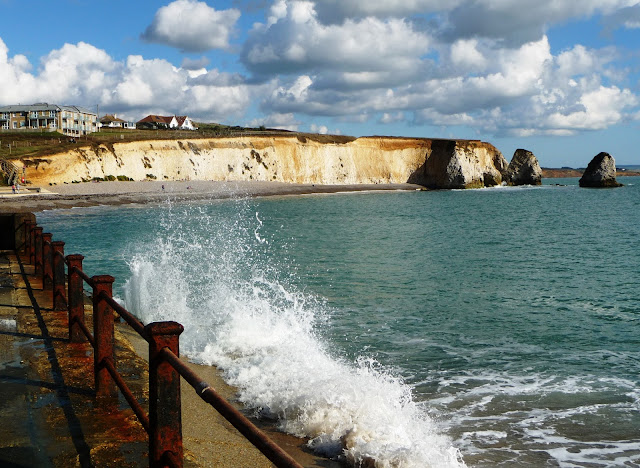 It was a short drive on to Mottistone Gardens, where we just had about half an hour before closing for a very swift walk. Considering we were only there a short while, I did manage to take lots of photos, so I think I'm going to have to share these in a separate post, but here's a teaser ... 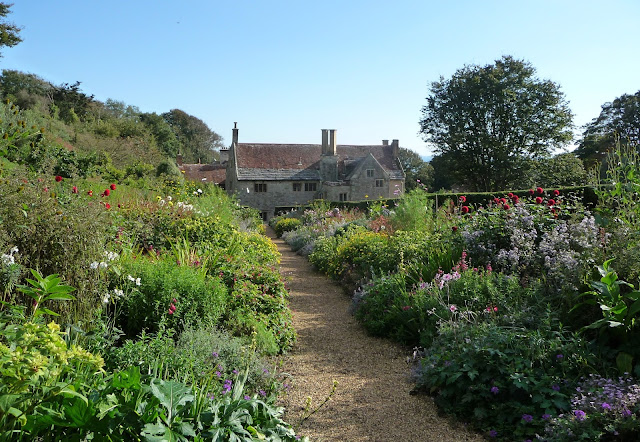 Well before we were ready, it was time to make our way back to Yarmouth to catch the 5.20pm back to Lymington.

We just had time to have a walk along the old wooden pier, where we watched our ferry come in, before it was time to make our way back to Lymington.

We were soon back on board watching a huge cruise liner making its way from Southampton in the distance. Knowing that mum and dad were sailing from Southampton at around this time on their cruise I wondered, could it possibly be them? A quick phone call to dad confirmed that indeed it was. What a coincidence. Don't think they could spot us though. 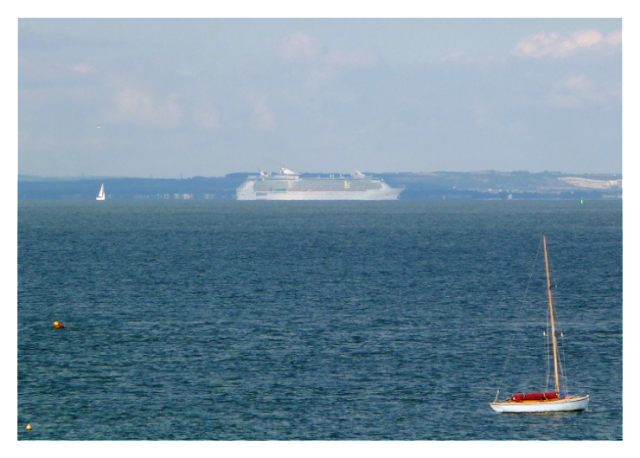 Before long we were back where we'd started ...

We'd had the loveliest of days and, though we were both pretty tired, we just weren't quite ready to settle back in at Border Cottage just yet ..... so we didn't. We ended up calling into the Hare & Hounds in Sway for tea, and very nice it was too.
Posted by Carol at 13:47

Email ThisBlogThis!Share to TwitterShare to FacebookShare to Pinterest
Labels: Beautiful Britain, Hampshire, Isle of Wight, Life of Pottering, National Trust, Out and About, Seaside, The Needles