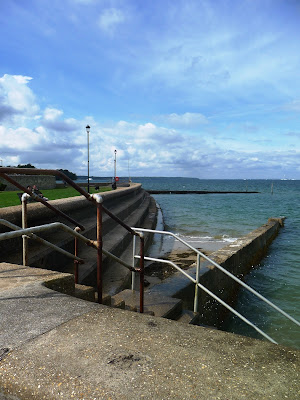 Welome to the second of my posts about our recent holiday on the Isle of Wight. Today I want to share our thoughts of one of the 'Wonders of the Isle of Wight' ... 'Ryde' ... where you walk 😀

For some reason, and I really don't know why, we had low expectations of what to expect from Ryde, so we were blown away from our first view of the front as we drove in. It was of those really surprise reveals ... where one minute you are just driving along a residential street and the next the coast just appears before you. Sadly I didn't capture this moment on film, but I do have lots of other pictures to share with you.

As it was a glorious day with plenty of blue skies and sunshine we decided to start our visit on the front, saving the town centre for another time.

We managed to park up fairly easily along the esplanade, about half way along, and decided to explore the wooden pier end first.

Before walking out along the pier we had a wander along the front and spent a good while enjoying the sunshine and taking in the views, which were pretty amazing in all directions.

There were cafes, the old railway station, which runs out along the pier, the hoverport and plenty of places to sit and just take it all in. 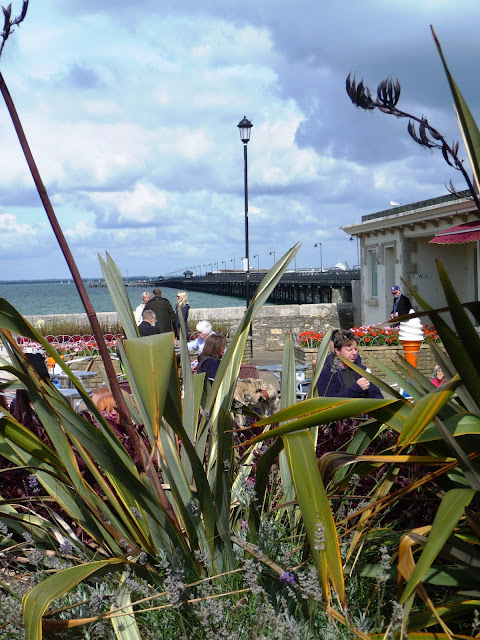 Having had a bit of a wander we decided to head out along the old wooden pier.

It's not your traditional seaside pier, full of amusements and all kinds of tat. It is an absolutely fascinating structure and has been here since 1814. It is currently about half a mile long and is open to both people on foot and motor vehicles, with parking at the sea end. There is also a train service between the coast and the pier head. 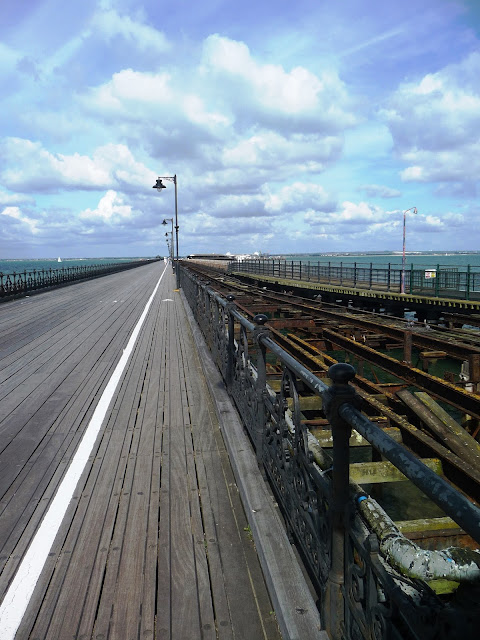 At one point there was also a tramway and you can see the old tracks to the right in the picture above.

We were so lucky with the day we had, the weather was perfect and the colours really took our breath away. The rusty tracks of the old tramway against the bluey green of The Solent made it worth the walk alone. 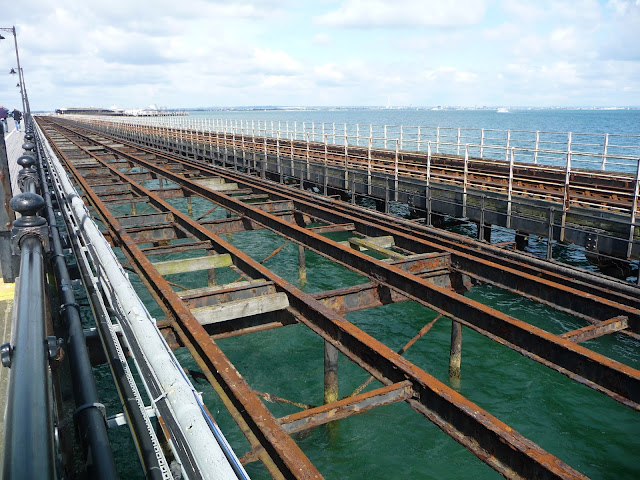 Walking out along the pier gives a real sense of how busy The Solent actually is and the level of traffic to and from the mainland.

To the West we saw the regular ferry from Portsmouth to Fishbourne ... 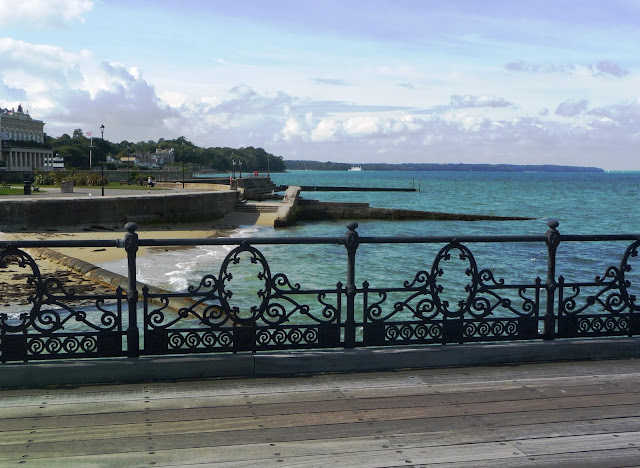 ... and to the other side, directly next to the pier is the hoverport with a very frequent service, also across to Portsmouth ... 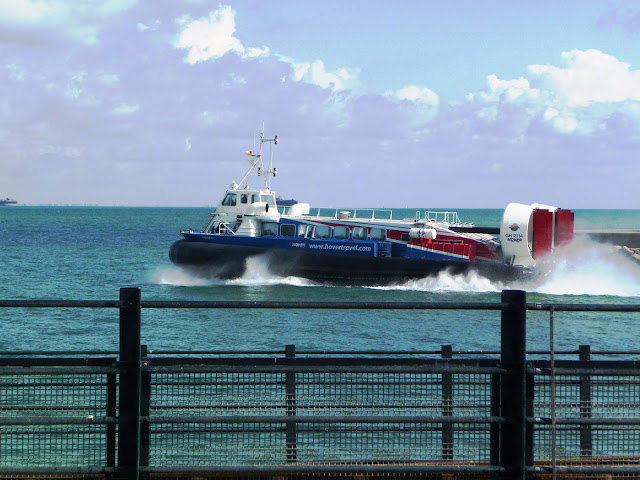 At the end of the pier you can also watch the passenger ferry docking and the train trundling back and forth. Seriously, if you like transport, this pier is definitely not to be missed.

So, we had a beautiful day, a beautiful old pier and plenty to watch, all we needed now was somewhere nice for a sit in the sun and some light refreshments.

We found this at the end of the pier where we stumbled upon one of the loveliest spots we've ever come across to have a coffee and rest awhile.

Walking through the old Victorian station building took us to a Costa Coffee. Now, we are not really frequenters of Costa, although I know they do have a staunch following. However, they seriously have an amazing spot at the end of the pier.

We grabbed our refreshments and headed out the back to find a perfect little sun trap, from where we sat and watched the comings and goings of the boats, the hovercraft and the train.

It was a real treat. There was hardly anyone there. It was really tranquil and somewhere that did get a return visit later in our holiday. 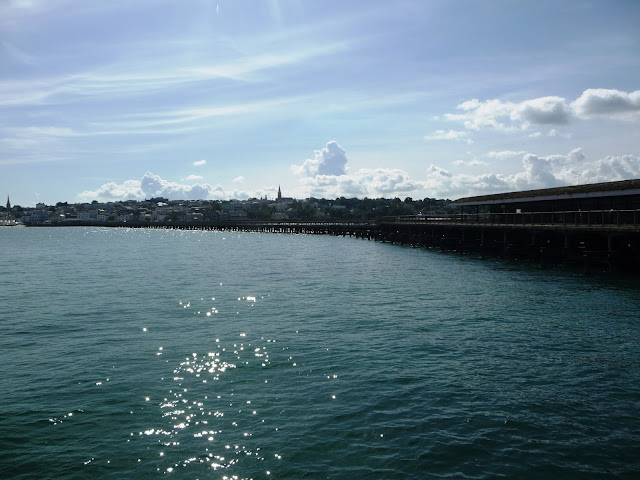 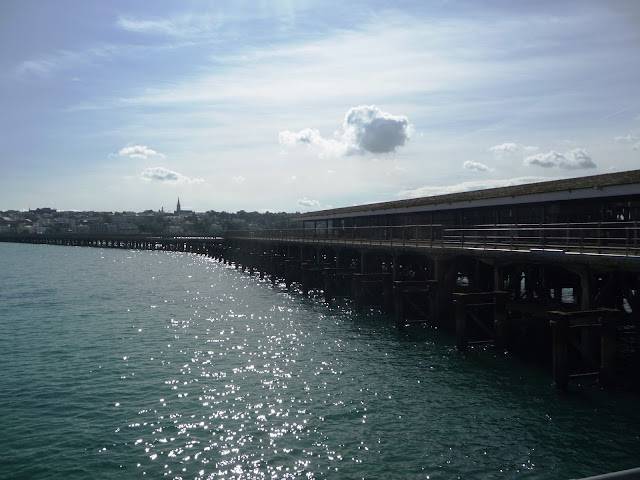 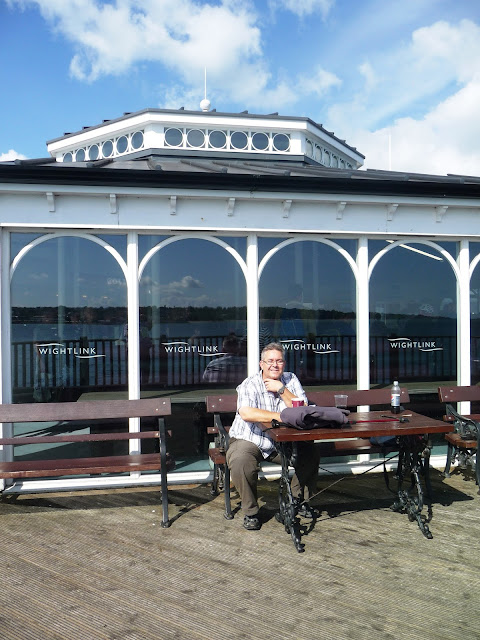 After a fair while just sitting, enjoying the sunshine and watching the world go by, we decided it was time to have a last look round the end of the pier ... 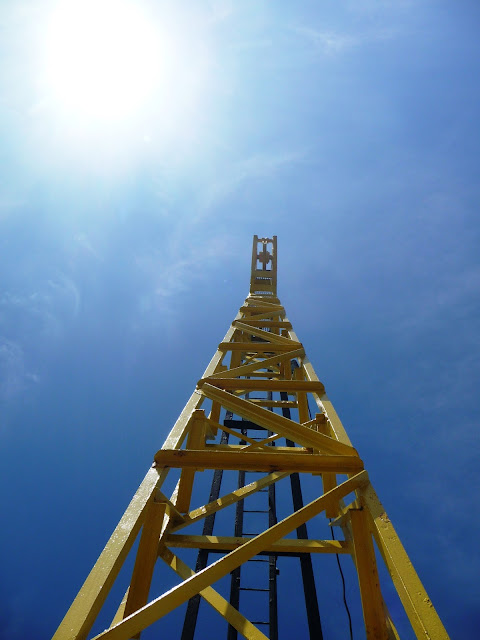 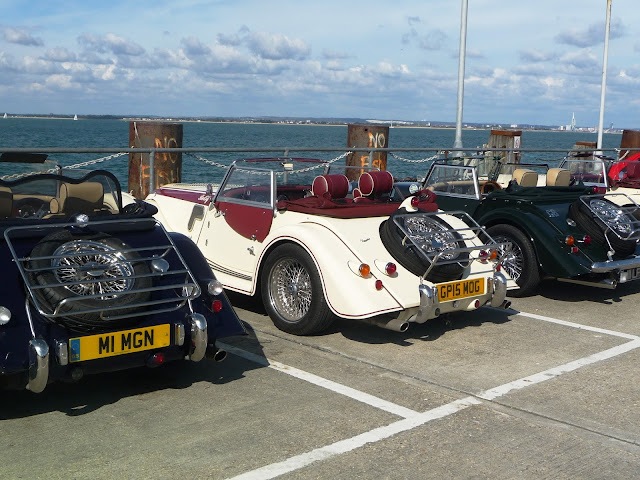 ... before having a wander back. 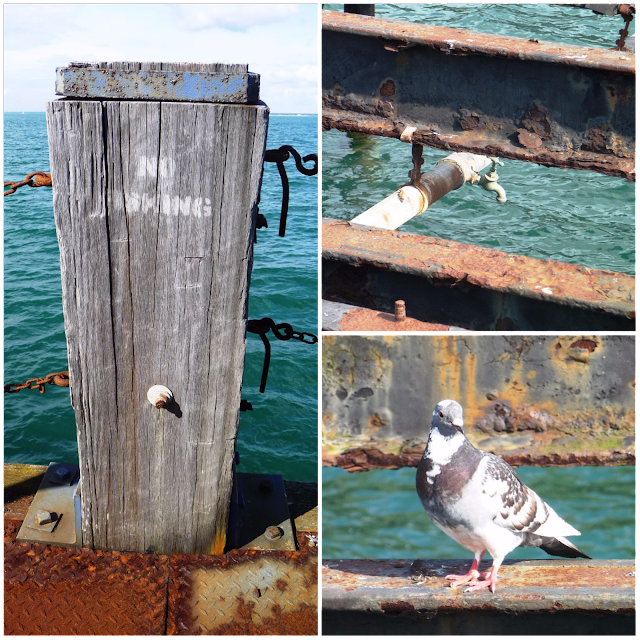 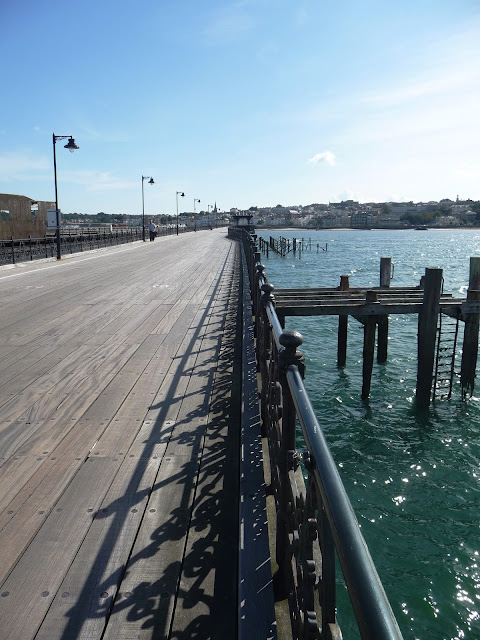 Of course we couldn't miss a photo opportunity of my man with a train ... 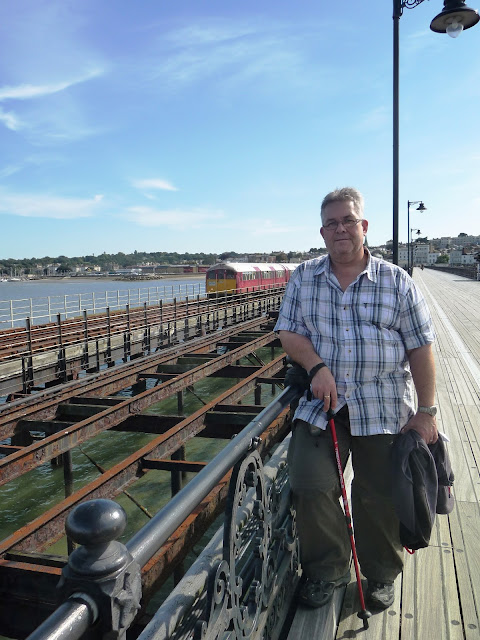 Back on dry land we had a wander the other way along the esplanade towards the small harbour ... 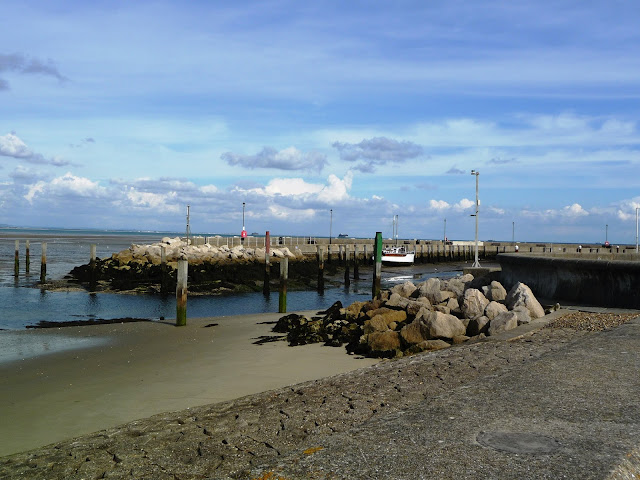 ... and the beach, which was just vast and soooooooo sandy ... 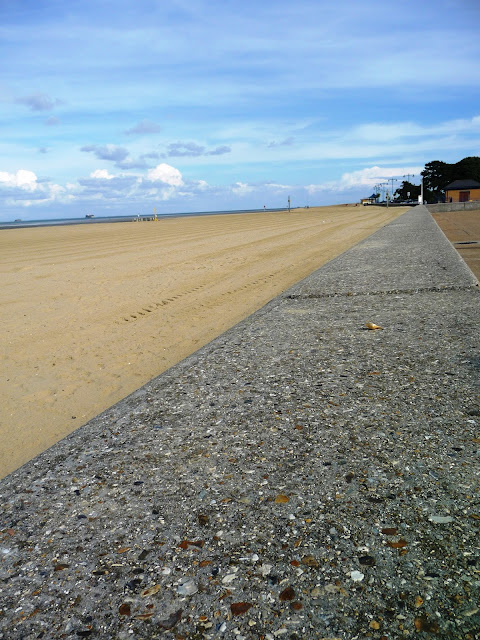 Whilst the pier is not quite so traditional the rest of the esplanade is more of what you would expect from an English seaside town, with plenty of places to eat or buy an ice cream, games for the kids and a few bits of amusements, all set against the backdrop of the beautiful beaches and the blue of The Solent with its intriguing and mysterious forts in the distance. 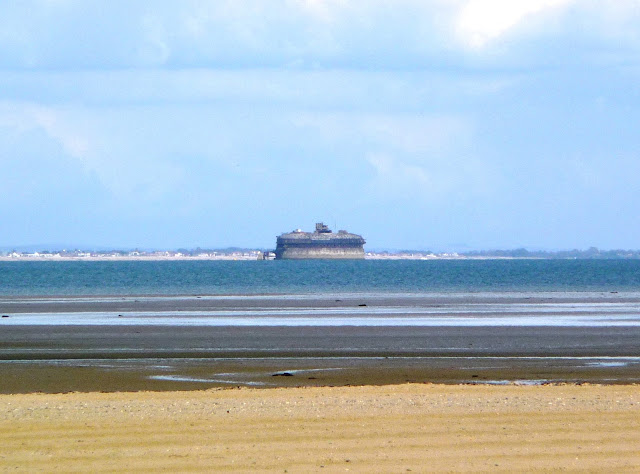 That was all we had time for on this visit. We had spent a good afternoon here and hadn't finished our wanderings along the esplanade and hadn't even begun to look at the town centre.

Email ThisBlogThis!Share to TwitterShare to FacebookShare to Pinterest
Labels: Beautiful Britain, Hampshire, Isle of Wight, Life of Pottering, Out and About, Seaside