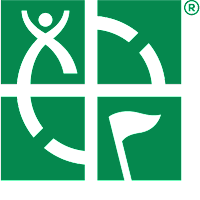 We are back to our recent Lake District holiday for today's post ...

After three days of perfect weather, the forecast for Tuesday was not quite so good, with the promise of rain pretty much all day.

We agreed on Monday evening that if we got up on Tuesday morning and it was raining heavily we would stay in and just enjoy the relaxed atmosphere of Sale View. We'd got plenty of reading material, I’d brought some craft projects with me and Martin had brought the PS3, so we would have plenty to keep us occupied.

Whilst there was a certain attraction of a lazy day around the cottage we were pleasantly surprised to get up on Tuesday morning to find that, yes it was quite dull but, it was actually fairly dry and there were only a few clouds, so we decided to risk the weather and headed into Cockermouth for the day.

We haven’t done much Geocaching in ages and there seemed to be a few interesting looking ones in Cockermouth that we really wanted to have a go at. There were two multi-caches and a mystery cache that looked like they would give us a good walk round the town, taking us off the beaten track and letting us explore parts of the town you wouldn't tend to see if you were just passing through.

The multi-caches are a bit like treasure hunts and involved visiting local points of interest looking for answers to clues. These answers then provide the information needed to calculate GPS co-ordinates for a final hiding spot.

The mystery cache involved finding the actual location of a number of picture images and, again, answering questions to give us the information we needed to find the final bounty.

I know it all sounds a bit complicated, but trust me, it really is good fun 😁

We parked up just off the Market Square and soon spotted the ancient method of sheep counting, which I'd never heard of before ... 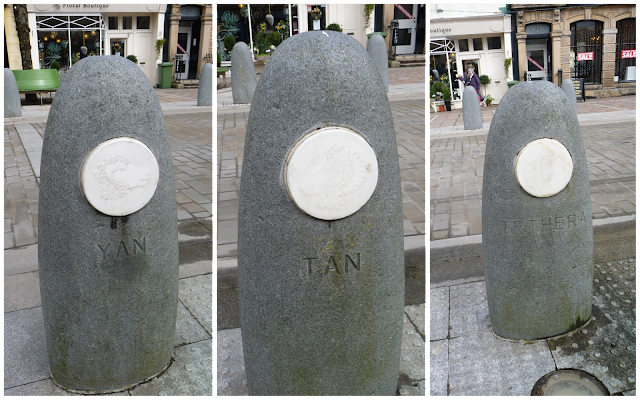 We thought we would try to be efficient and look for the information we needed for all three of the caches at the same time. We were following the route for one of the multis, whilst looking for the clues and the images for the others at the same time, which did get a bit complicated at times, especially as we hadn’t printed out the pictures so we were actually looking for them based on my own artistic impressions, which didn't really much resemble the originals.

We started off quite well and by the time we got to Wordsworth's birthplace at the bottom of the High Street, we had managed to find all of the information that we needed for one of the multis, were doing OK on the other one and had spotted a few of the images we needed for the mystery cache. 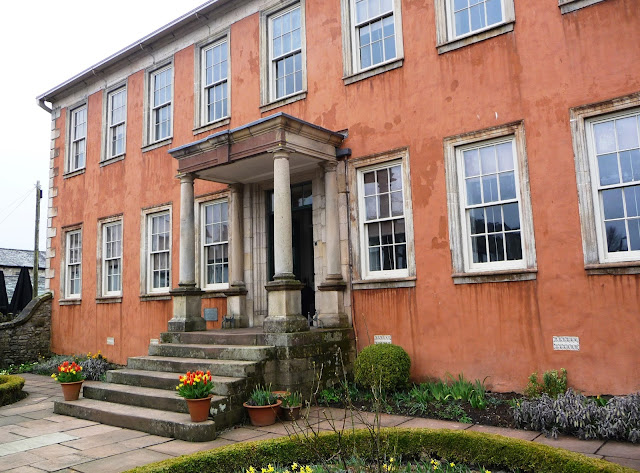 We decided to take a bit of time out and spent a good hour exploring the house and garden, including a pit stop in the National Trust cafe, before getting back on the caching trail and looking for the rest of the clues and the pictures that we still needed to find.

It's a fairly small property, but it is interesting to see it laid out as it would have been back in Wordsworth's day ... 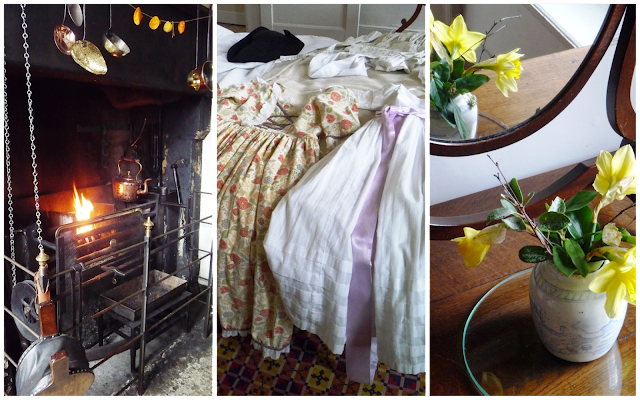 The garden was looking a little bleak ... 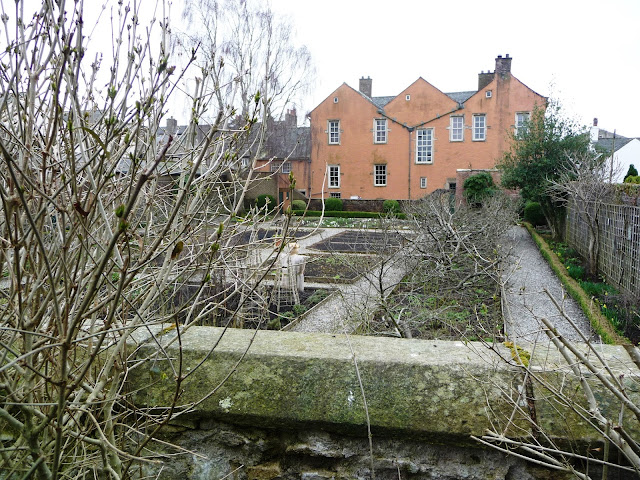 ... but there were lots of pots with spring flowers to give bright pops of colour here and there ... 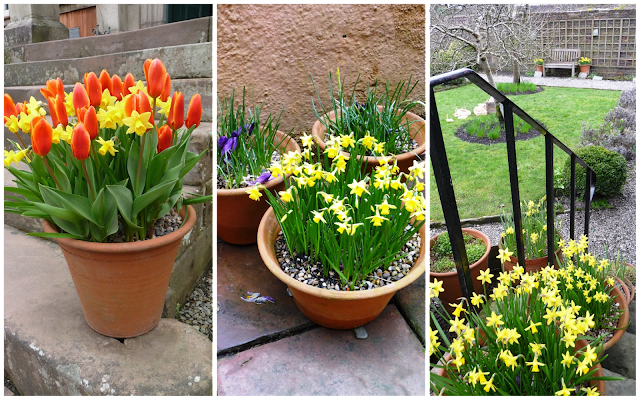 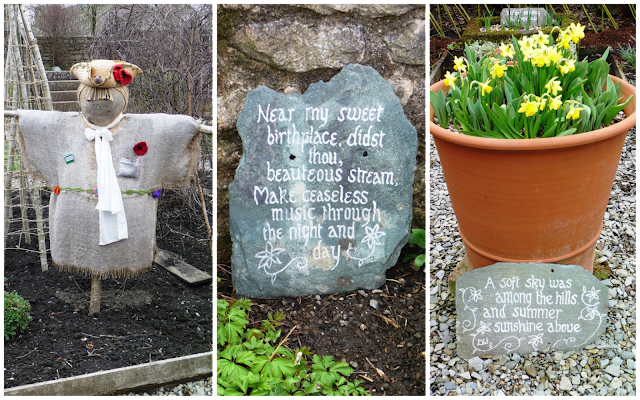 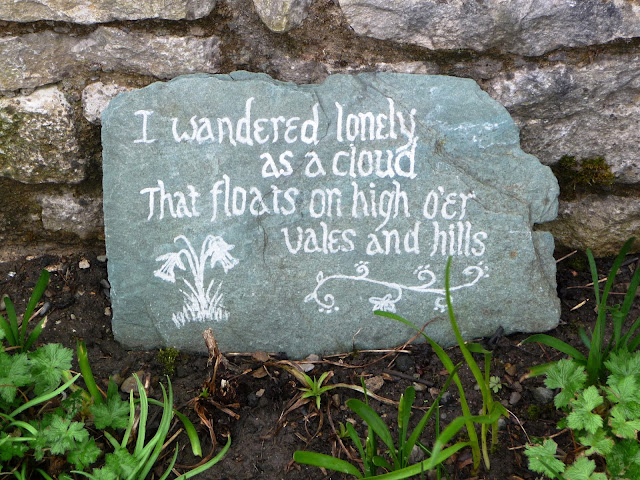 From Wordsworth's birthplace we took the place alongside the river and headed back towards Jennings Brewery ... 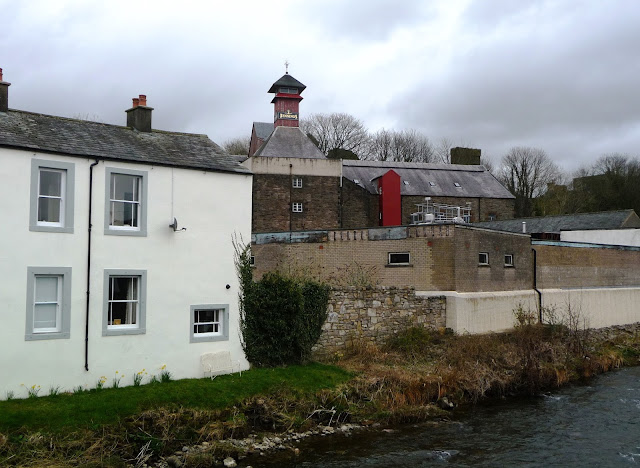 Eventually we were back where we started and we had everything we needed for the two multis but were still missing four of the pictures, one of them being a town trail plaque.

Well, there was only one thing for it, having taken a photo of a map of the town trail on my phone to identify where all of the plaques were, we decided that we were too close to give up so we set out again, this time following the town plaque trail, making sure to look closely for all of the plaques. 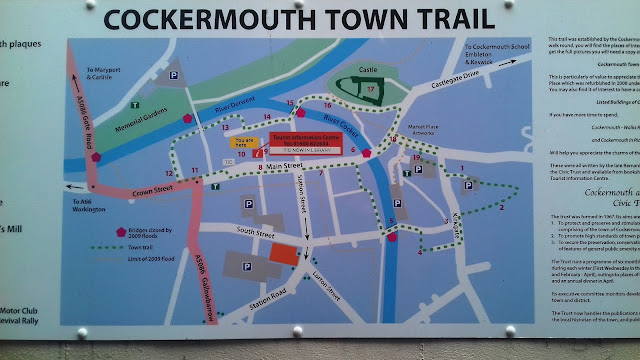 We pretty much redid the whole of the trail, which took us well off the beaten track passing quaint old cobbled streets and criss crossing the rivers. We managed to find two more of the images, but there were a couple of plaques that seemed to be missing and we were left still missing two of the images we were looking for. 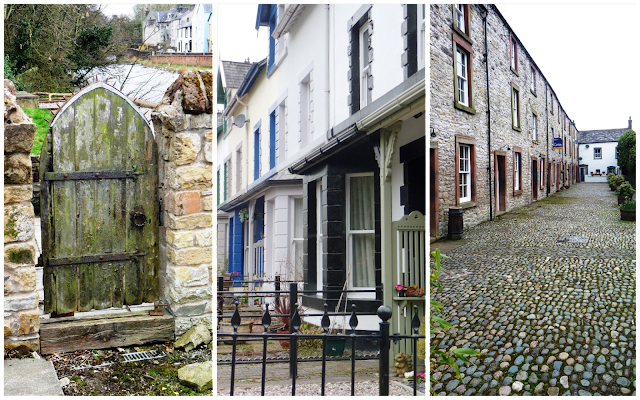 We decided we needed another breather and headed for a cafe where we had more refreshment and worked out the final location for the two multis, which we had all of the information for.

We knew that one of them ended up in the library, which closed at 4pm. By now it was 3.30pm and, whilst we weren’t far from the library, we still had to go and find the second stage of this cache, which, frustratingly, we had already walked past once and not realised.

We set off at a pace, picked up the information we needed, which seemed to make no sense at all and headed back to the library with 10 minutes to spare.

We showed the lady behind the desk the information we had and asked if it meant anything to her and she grinned. We asked if she could point us in the right direction but no amount of pleading would elicit any further assistance. We were on our own, with 1000s of books and 10 minutes. 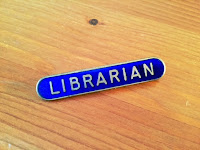 Well, having been a school librarian, and yes, of course I still have my badge, I pulled some useful information from the depths of my brain and it wasn’t long before we found what we were looking for. We were both so chuffed to find it, we had worked hard for it and it has to go down as being one of our favourite caches ever.

I’d identified one last possibility for one of the two pictures we were missing and hallelujah, we managed to find it, so just one missing now. 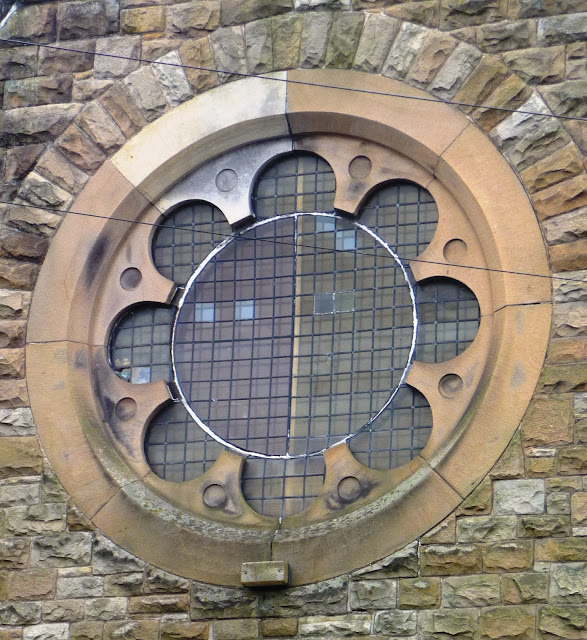 It was time to pick up the 2nd multi, which was exactly where it should have been and was a nice easy find for Martin, whilst I was trying to work out if we could find the last cache with one clue missing.

As all Geocaches work on the basis of GPS coordinates, which are made up of 15 digits, and we just happened to be missing the very last digit, we decided to take a punt and headed in the general direction of where we thought it could be.

Wahey!!!! We only went and found it. What a result. We were both so pleased with ourselves you wouldn’t believe.

By now we were both shattered, we’d walked up and down the Cockermouth High Street more times than I would like to mention and we’d seen all of its nooks and crannies, some of them twice, we’d crossed the Derwent, walked by the Cocker and visited Wordsworth's birthplace, we were creaking at the joints and more than ready for home 😀

Back in 2015 Cockermouth suffered major flooding as a result of Storm Desmond and, whilst there was no evidence of the devastation to be seen on our visit, there are lots of reminders dotted about the place ... with flood markers and pictures of the floods on the town's history wall. There has clearly been lots of work done to try and avoid the same situation occurring again with lots of flood defenses to be seen around the town.

Seeing it as we saw it on our visit we couldn't imagine how awful it would have been for the town, with all of the places we'd visited being under water and the High Street looking like it did in the picture below ... 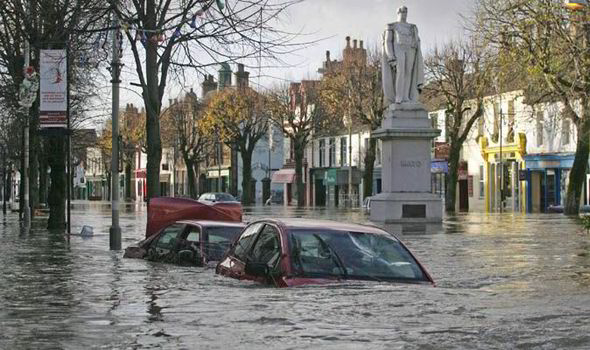 We really loved Cockermouth. It was an unexpected treat and well worth the visit. We would definitely go back, but maybe for more of a leisurely visit and a bit of shopping 😀

"The Geocaching Logo is a registered trademark of Groundspeak, Inc. Used with permission."
Posted by Carol at 15:13

Email ThisBlogThis!Share to TwitterShare to FacebookShare to Pinterest
Labels: Beautiful Britain, Geocaching, Life of Pottering, National Trust, Out and About, The Lake District