I wrote this post over the course of last week and it just kept growing, so apologies if it's a bit of a long read, but grab a cup of tea, sit in the sun and see what I got up to.

There was a real theme across the whole of last week and I couldn’t decide between 'Sunshine all the Way' or 'Crafting like Crazy' as the title for today’s post. I ended up having to go with both.

When it comes to the weather, it could not have been more different from the previous week. It was positively summery, warm temperatures, blue skies, lots of sunshine and hardly any rain at all. 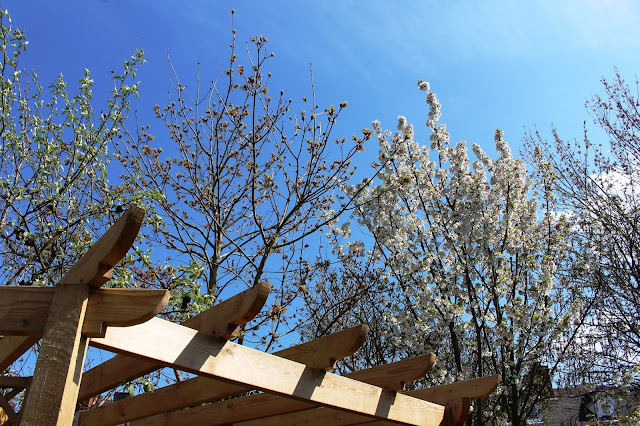 We had a really productive week and I’m sure the weather played its part. A bit of sunshine makes all the difference, it seems so much easier to get up in the morning and it's a real motivator.

On Monday Martin was off work but he had an early doctor’s appointment and, though it was never my intention, I got up when he did. I’d forgotten just how much you can get done if you are up early and in the mood for action.

By 9am there was a washload on, a lamb and butternut squash curry in the slow cooker for tea and soup made for lunches for the rest of the week.

By about 9.30 Martin was back and he got on with bottling a batch of wine and beer whilst I blogged and even actually did some more cleaning. All of upstairs, I was quite proud. That was definitely not in the plan.

We had a break for lunch and decided that, as we’d still got all afternoon and the weather was so good, we would try and plant some of the ever growing pile of which was slowly taking over the patio. 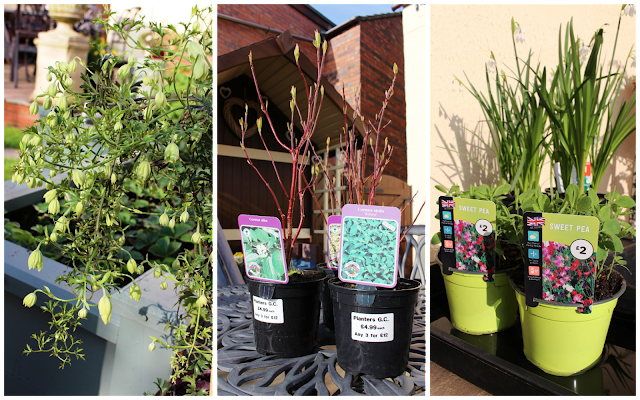 This turned into a bit of an epic session and we got loads done.

We took a few bits and pieces out of the raised bed, which we are planning on planting in a white theme. Foxgloves, red valerian and periwinkle were all re-distributed around the garden, and we planted a honeysuckle up against the quince tree, hoping it will scramble up and screen some of the lower branches which are all quite bare. 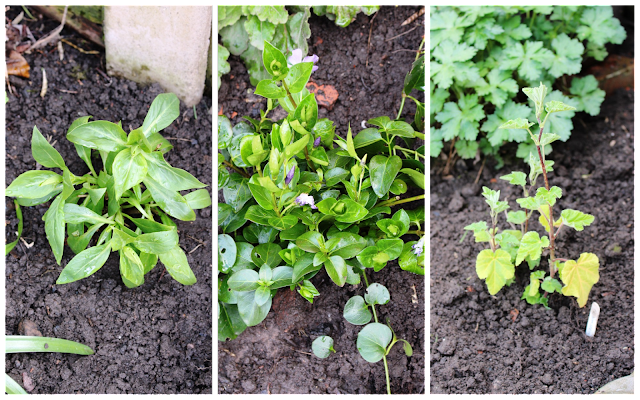 We moved a white agapanthus and a libertia grandiflora, which we bought last year and haven’t seen in flower yet, into the new white bed and also added the new clematis and one pot of our bargain giant snowflakes. 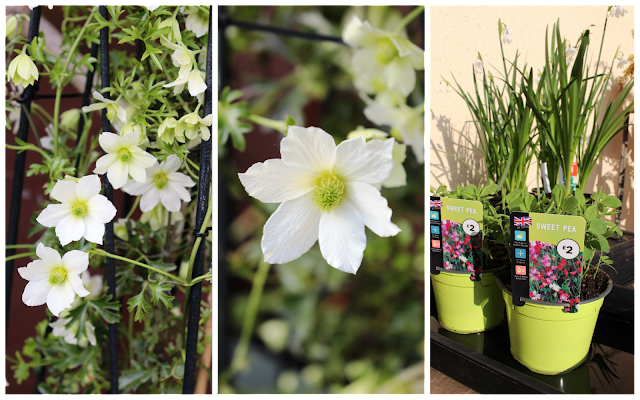 We also planted the potentilla, Martin's chaenomales, the dogwood and the new prunus into the borders. 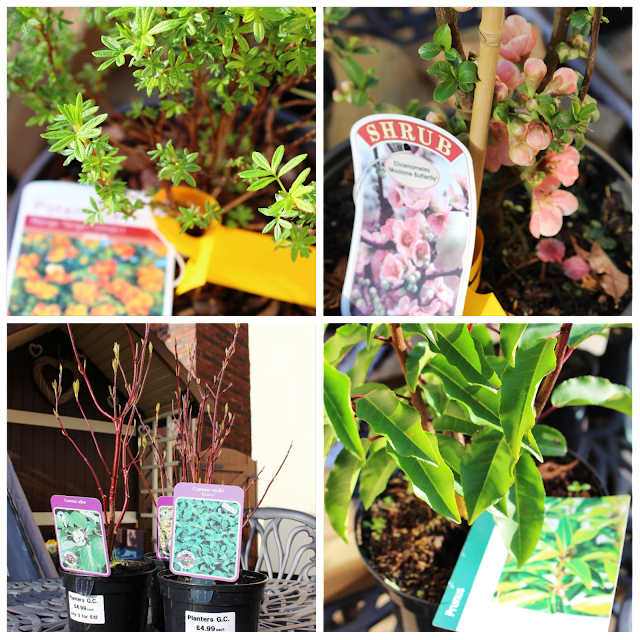 We did really well and are now only left with a flowering currant, the grass and a couple of pots of summer snowflakes to find homes for.

By the time we came in we were both shattered, thank goodness dinner was in the slow cooker.

On Tuesday Martin was back at work and I had a bit of a craft day, well it was World Craft Week, I had to do my bit.

I have been wanting to have a go at making peg bags for ages. I have made one before, but it was quite a time consuming pattern as it was lined and I was looking for something a bit simpler as I wanted to see if it was practical to make some for my craft stall.

I found a lovely straight forward pattern on Gillian's Tales from a Happy House blog and had a go. It went really well and I made up four and I'm really pleased with how they turned out. 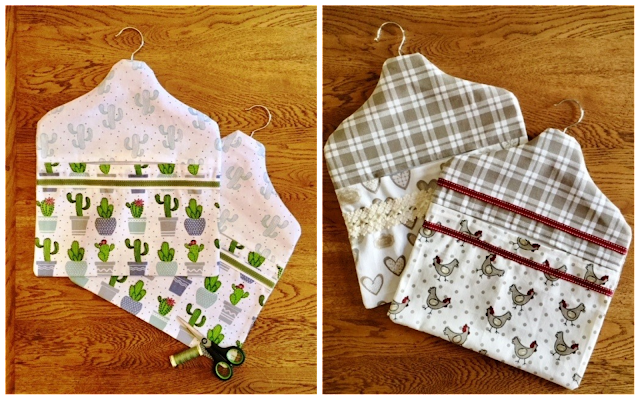 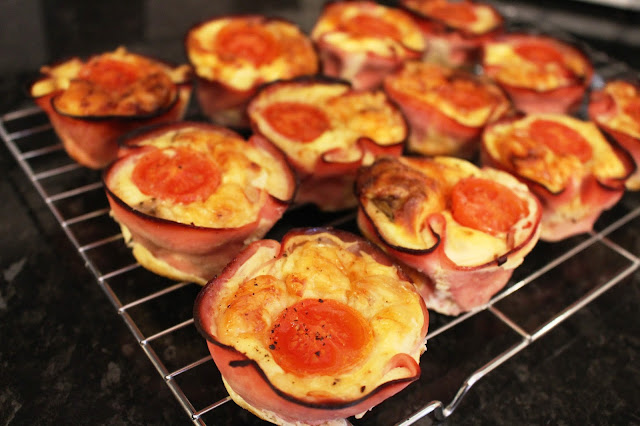 Oh ... and this came. We’ve been looking for just the right thing to hang over the stairs for ages and this is definitely going to fit the bill, with memories of Scottish holidays thrown in as a bonus. 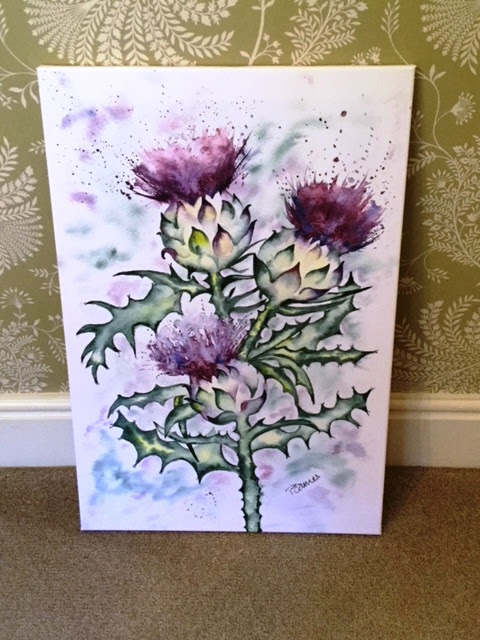 The pace was just a little slower on Wednesday, though I was up relatively early as mum called round to have a look at what we’d been up to in the garden.

It was a glorious day, a real treat and I managed to have my first al fresco lunch if the year whilst having a browse through the latest Gardeners’ World magazine. 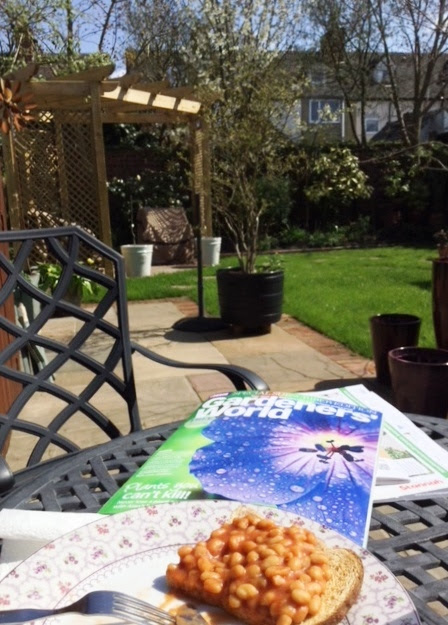 It was just lovely, listening to the birds singing away and feeling the warmth of the sun, a pleasant reminder of what we've got to look forward to in the coming months.

... and I headed indoors to cut out another four peg bags ready for sewing up on Thursday.

Would you believe it, Thursday morning and bright sunshine again. I was chained to the sewing machine for the morning, but four more peg bags and four taggy blankets later there was time for another lunch in the garden. 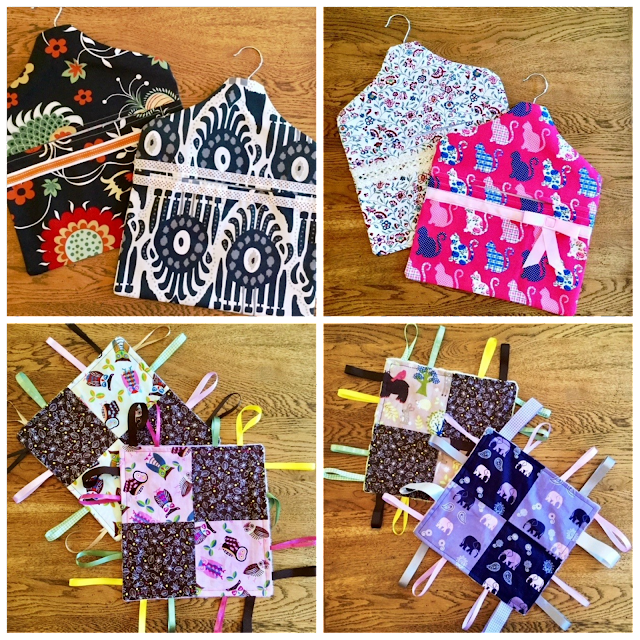 I sat on the lower patio, tucked round the back of the house next to the potted pink rhododendron, which we rescued from the garden a few years ago and it seems really happy in the pot. 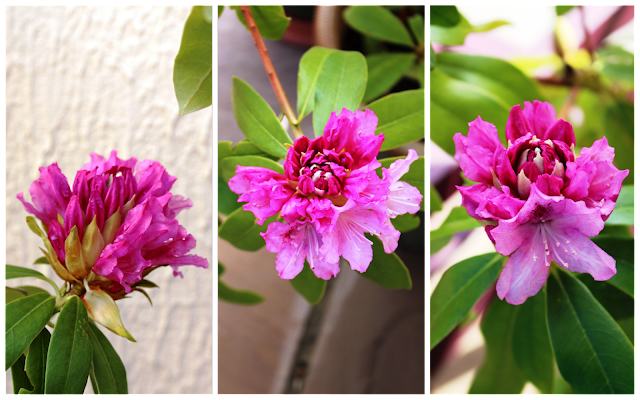 There was the gentlest of breezes, but it was enough to make the blossom from the prunus scatter like wedding confetti. It looked lovely but it's so sad that in the space of just over a week it has flowered and dropped. At least the weather was good enough to get to enjoy seeing it, if only for a very short while. 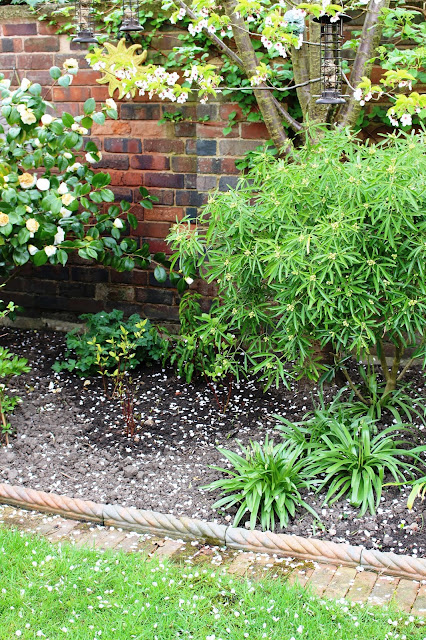 I think I may have inadvertently killed off some of our cosmos and zinnia seedlings, I thought it would be a good idea to take the lids of the propagators to give them some fresh air, when I had a look at them an hour or so later they were starting to shrivel up 😟 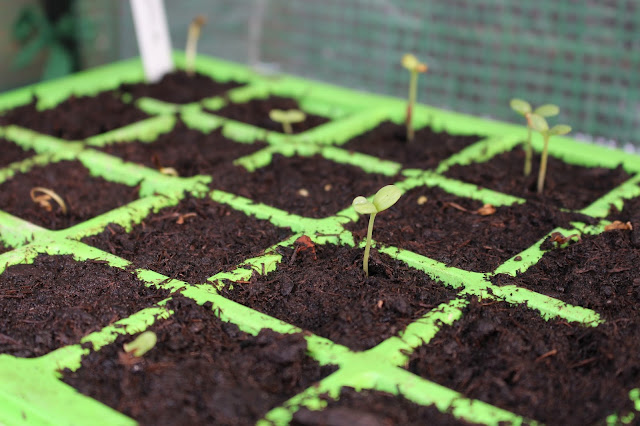 I watered them and covered them back up and fingers crossed I got to them in time.

I then had a go at making some low syn banana and chocolate chip muffins, using plain flour, so goodness only knows how they will turn out. They did actually look ok, but I have to be honest, they were a bit dry. Don't think I'll be making them again. 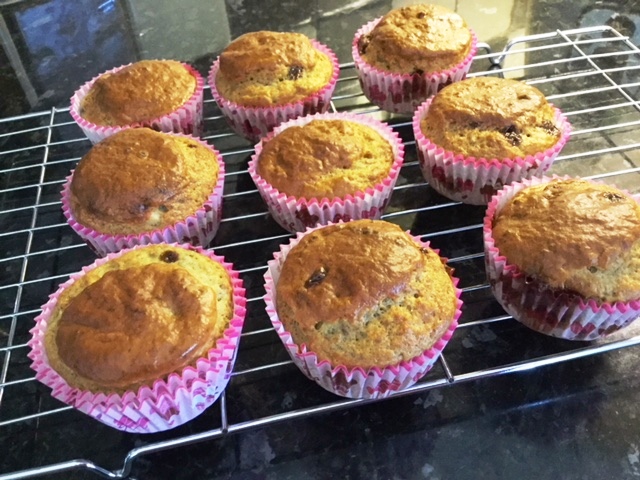 Friday and the sun was still shining, I was chained to the ironing board for the morning ... yawn yawn.

It was another really productive day, the window cleaner came, the grass had its second cut of the year ... the feed and seed looks to have done a good job, the grass is looking lovely and thick and green.

I was still feeling crafty and decided to have a play with the Pom Pom makers that Martin bought me back from Aldi a few weeks ago ... 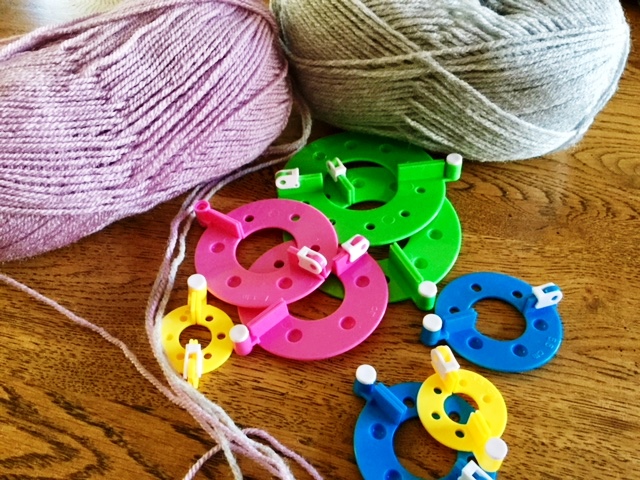 I It was sooooo easy making pom poms with these, loads quicker than the way we did them as children, with two circles made out of cardboard. I made some Pom Pom bunting, I didn’t even know it was a thing, but I love how it’s turned out ... 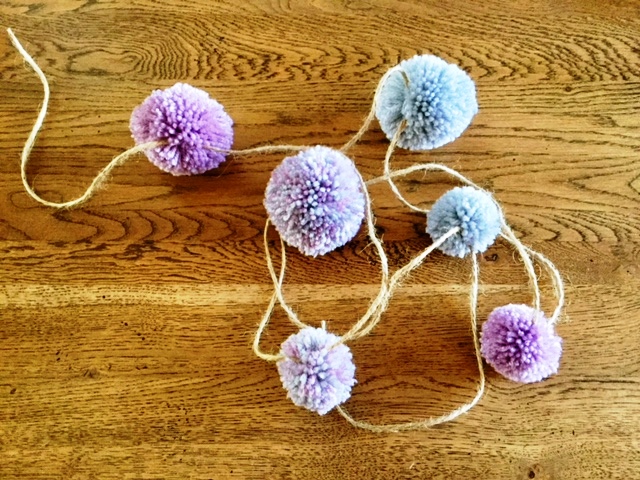 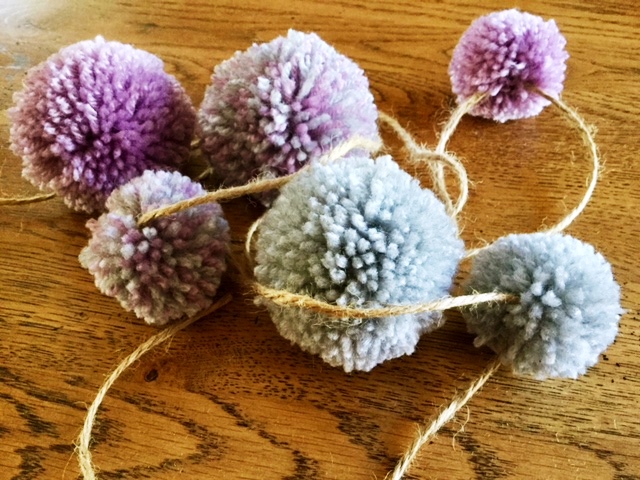 ... I hung it under the arbour, where I should be able to leave it out as it’s under cover ... 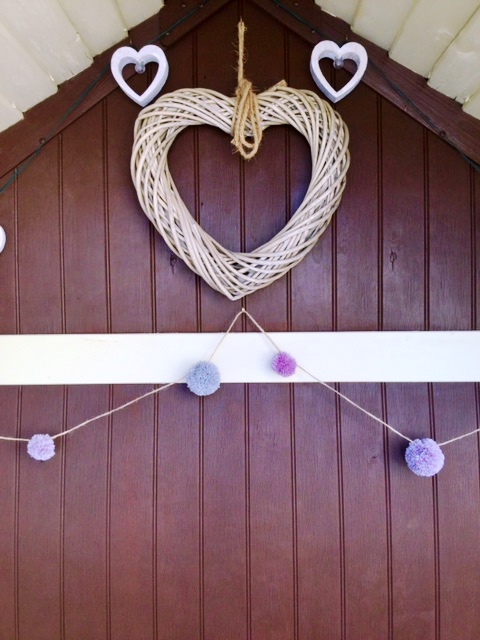 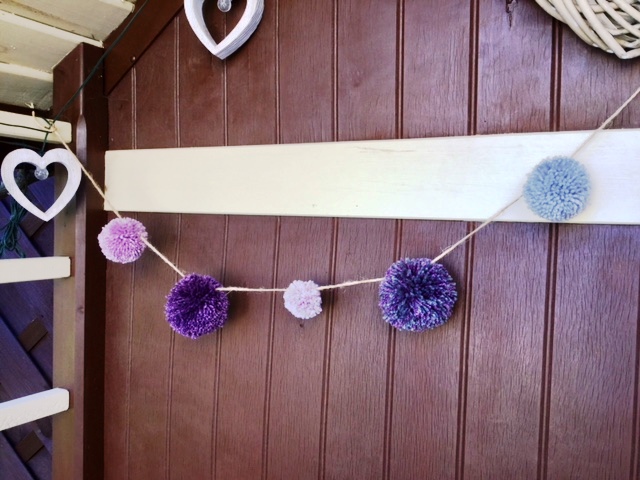 Mum popped round again and there was more sitting in the garden making the most of the sunshine.

Then it was shopping before catching the bus and heading into town to meet friends for curry at an Indian restaurant we've been eating in for the last 30 odd years. 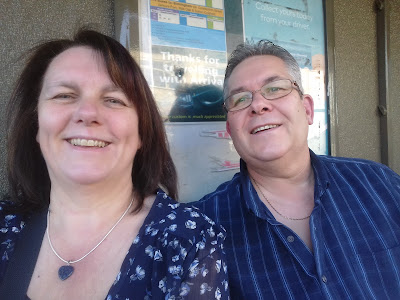 We got stuff out for a BBQ later and headed out to try and find some bits so I could have a go at making pom pom key rings, as well as trying out a new local tea room.

We got back and I set myself up in the garden and made a bunch of key rings, managing to use up some of my old jewellery making beads. 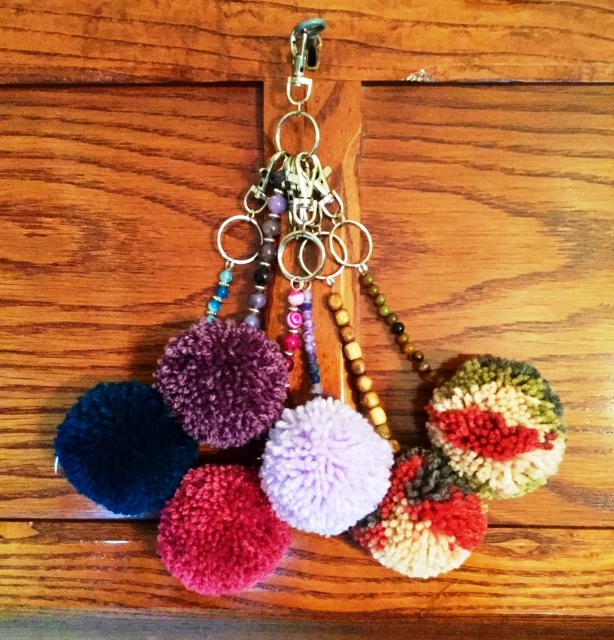 It wasn’t long before the weather turned and we had to have a mad dash inside ... so much for the BBQ.

We thought it might end up being an indoor BBQ but we only had a very brief shower and by 5pm the sun was shining again, though it had cooled down a fair bit. By the time we were ready to start cooking tea we must have changed our minds five times as to whether to cook outside or in.

In the end Martin decided that we would just go for it and have the first BBQ of the year. He was a star and did all of the prep and the cooking while I just carried on winding pom oms, I had got more than a little bit obsessed.

I left the pom poms for just long enough to eat ... locally caught trout gifted to us by a friend of Martin’s, who likes fishing, but not eating it, and gyro style chicken kebabs a la Slimming World, with a very colourful salad and baby new potatoes. 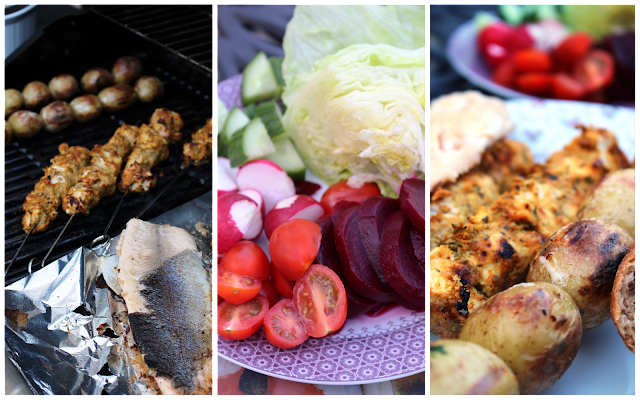 We ate outside and whilst it wasn’t toasty warm it wasn’t too chilly. It would have been lovely ... but it was just sooooo noisy ... grass cutting, loud music playing somewhere, children shouting and the sound of the traffic on the bypass. I don’t really wish I lived somewhere else, as it's usually fairly peaceful out the back, but what I wouldn’t have given for some real silence. It’s one of the things I love and really look forward to when we are staying in holiday cottages in the middle of the countryside.

I still hadn’t finished with my pom pom making, I stuck with it and made some more bunting, which I have temporarily hung above the dining room window ... 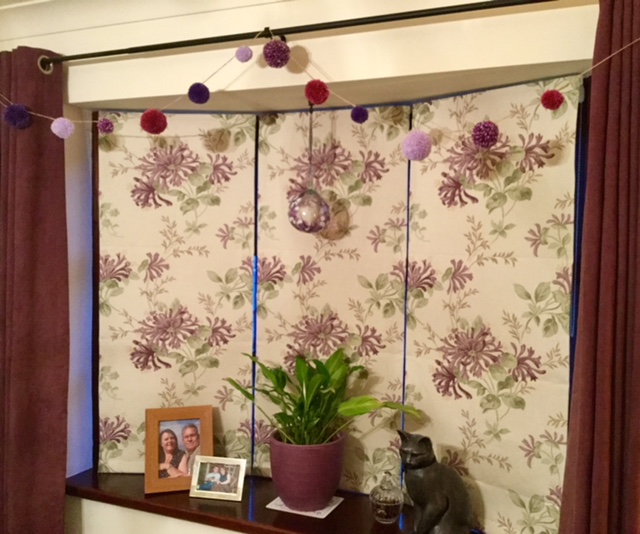 Sunday was bright again, but not so warm, and we got Abruzzi Lamb going in the slow cooker for dinner, before heading out for breakfast at a local place with friends, which took up a good chunk of the day.

Once back it was more crafting for me, I don’t know what came over me last week, I really had the crafting bug.

This time it was appliqué bunting in small embroidery hoops. Something else I’ve been meaning to have a go at for ages. 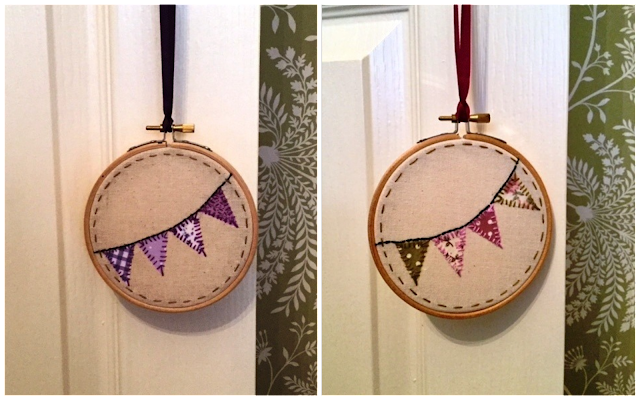 By the time I’d finished Martin had done a fair amount of pottering outside and sprinkled some more feed and seed on the lawn.

He came in and was making his sandwiches for work and asked ... "So, when are you making the quiche and the soup for next week's lunches then?" Yikes, I’d completely forgotten ... I lost a fair few wife points for that 😒

At least I knew what was on the cards for Monday, once the blogging was out of the way, oh, and I’d got one more embroidery hoop I wanted to do, maybe Monday would have to be a craft free day.

If you made it all the way to the end ... thanks so much for reading. Maybe we will see more of the sunshine this week ... I certainly hope so, it certainly does wonders for my productivity levels!

Email ThisBlogThis!Share to TwitterShare to FacebookShare to Pinterest
Labels: At Home, Craft Projects, Everyday Ordinary, From the Craft Room, Hand Made at Number 27, In the Garden, Life of Pottering, The Garden at Number 27