We've been away for Martin's birthday.  Our first cottage holiday of the year.  We stayed in Gooseberry Barn, a cottage in Holmesfield, on the edge of The Peak District, in Derbyshire, not far from Chesterfield. 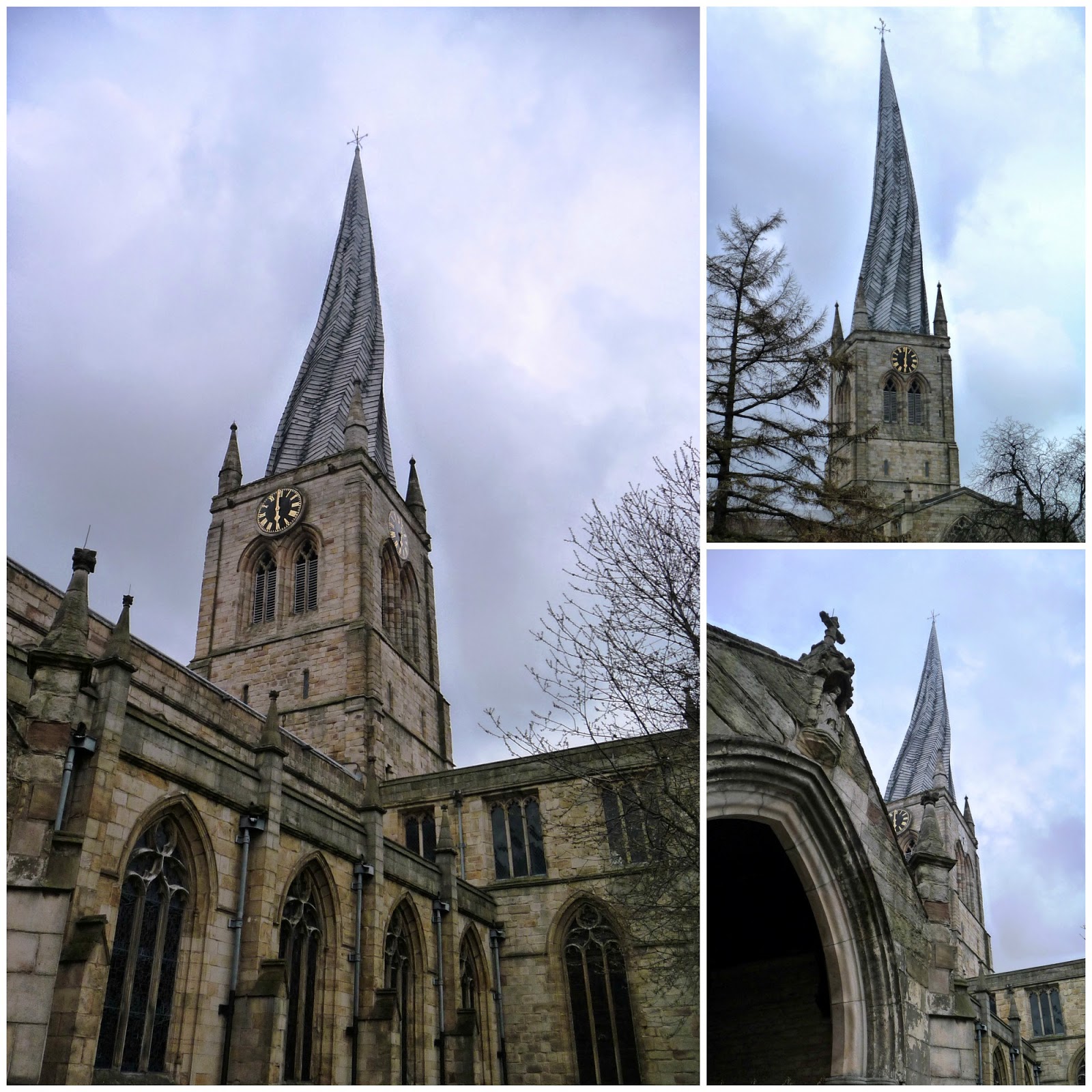 Day 1 - Friday
We loaded up the Astra, it's the first time she's been called into holiday duty since Martin and I met, and headed off up the M1.  The poor old girl was creaking a bit, under the weight of a full load, we are not known for travelling lightly, but we made it to Chesterfield in one piece.

We had a wonder around the town and had a really nice lunch in Tiffanys, we were too late for breakfast.  We decided we'd pick up our first cache of the holiday whilst having a look at the church with the twisted spire, Chesterfield's main landmark, before heading off to our cottage.

Holiday cottage arrivals always go the same way with us.  Initial excitement at getting there and seeing where we are going to be staying for the next week, followed by deflation when we look at how clean the glasses are, followed by a real dip when you look at how well (or ill) equipped the kitchen is.  Why do we do it?  We just can't help it.

We always come prepared though, we've learned over the years that a holiday cottage description of a 'well equipped' kitchen, is very much open to interpretation.  We never leave home without a sharp knife, a wok, an omelette pan and the slow cooker.  We do love to cook whilst we are away.

On this holiday we were lucky and managed to get in quite early, at about 2pm.  We were greeted by the owner who gave us a quick tour before leaving us to unload the car.  We pretty much dumped everything, whacked the underfloor heating right up, as it felt pretty cold, and headed straight off to Sainsburys to do the week's shop.

By the time the we've unpacked everything, including the shopping, Martin's put all the crockery in the dishwasher, the underfloor heating has kicked in and we're putting together a bit of a 'pick and mix' tea, we start to chill out and the place starts to feel like home for the coming week.

Day 2 - Saturday
After a restless night, it was just too hot, (It always takes a few days to work out the right temperature for the under floor heating), I woke up to the sounds of banging pots and the smell of frying lamb.

It was Martin's birthday and we'd brought some cards and presents away with us.  We had nothing special planned for the day, other than a slow cooked lamb dopiaza, which was well on its way.  Martin says that curry makes him happy.

Our first full day away always starts pretty slowly.  We tend to start off with a leisurely shower.  Showers and towels are another test of how well a cottage is going to work for us.  When it comes to a shower, less is definitely not more.  You need power!  Let's face it girls, we need to get the soap out of our hair.

When it comes to towels, you want a bath sheet, the bigger and fluffier the better.  It needs to go right round you.  You want to be able to wrap yourself up and wonder around in it, with your modesty fully protected.  We have been known to make an emergency call to mum and dad asking them to call into ours and pick up some towels to bring with them, when they've been coming to visit.

Once we'd worked out the magic combination of power and temperature the shower passed muster and we were soon wrapped up in nice big fluffy bath sheets, another big tick.

We then move onto breakfast.  Something nice that will set us up for the day.  We tend to eat whilst looking at what the OS maps, the National Trust and English Heritage sites and the guide books have to offer, along with what local Geocaches we fancy picking up whilst we are in the area.

This holiday mum and dad were going to be spending a few days in Chesterfield.  The plan was that they would come to us for the day on Tuesday and, if the weather was good, we would do a Geocaching walk round the Chatsworth Estate.  We then planned to meet up with them again at Hardwick Hall, a National Trust property, on Wednesday, before they head back home.

We also wanted to get our first English Heritage visit in, to Bolsover Castle.  We wanted to activate the year's membership that work had bought us as part of my leaving present.

As Bolsover castle is currently undergoing renovation it was only open at weekends.  Some of it was only accessible via a guided tour, which started at 11.00am or 2.00pm.  We decided to opt to visit today at 2.00pm, so had plenty of time to potter about before then.

We headed out at about 11.00am, didn't want to overdo it on our first day.  We decided to stop in the village and do our 2nd cache of the holiday.  A church micro - this is basically a series of tiny caches set close to churches right across the country.  This one was a multi, which means you are given a list of clues, which you have to solve, before working out the co-ordinates for the final location of the cache.

We had a good walk round the churchyard which loved lovely in the spring sunshine.  It was a glorious day and it was the first real outing for the new Digital SLR camera, though I had the Panasonic Lumix for back up, so we took plenty of photos of the church.

We soon worked out the clues which were all questions about the clock tower, which gave us the numbers we needed to be able to find the final location.  This was a short walk down a public footpath close to the church.  As you can see 'micro' does really mean micro.

Having got what we came for we headed back to the car to continue our journey to Bolsover Castle, which gave us chance to activate our years membership of English Heritage, part of my leaving present from work. 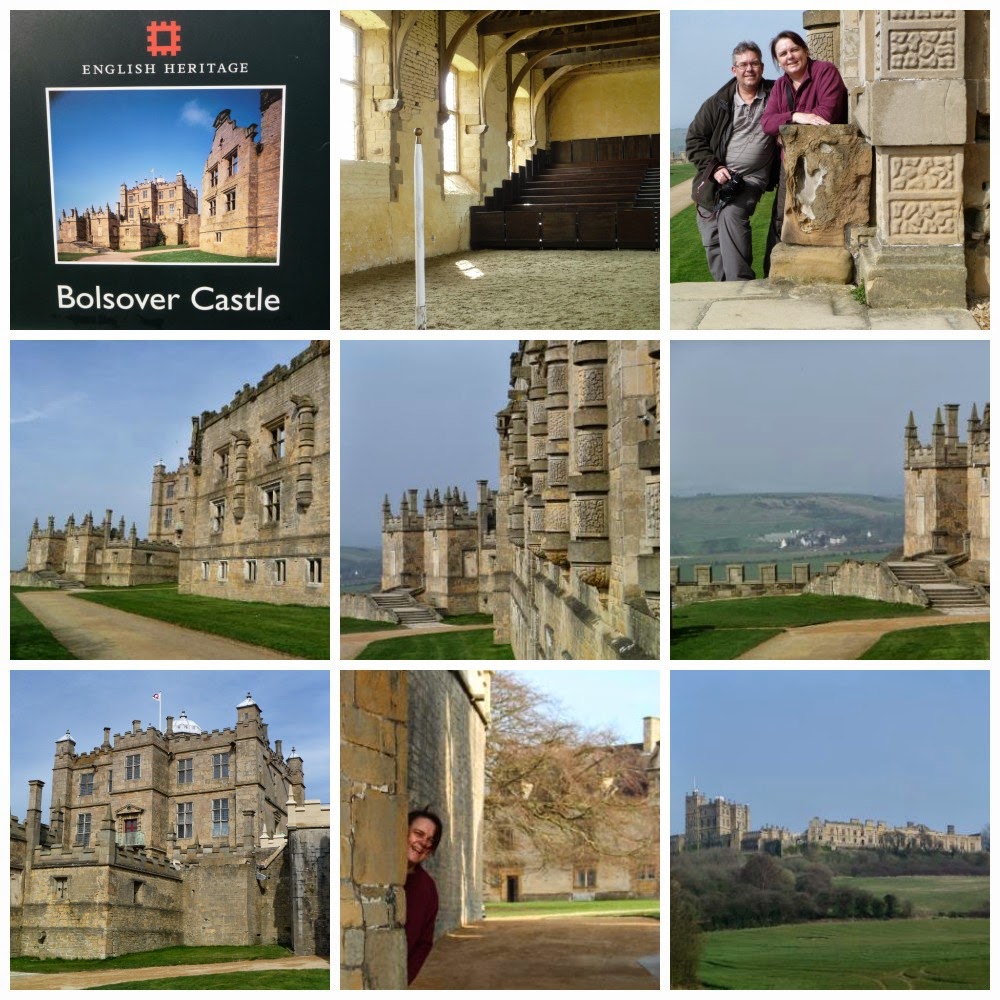 The castle looked beautiful today.  The weather was cracking and it was quiet enough to take plenty of photos without other people getting in the way.  We spent a lovely afternoon at the Castle, which will open fully next weekend, following a year of major renovations. The guided tour did show us part of the castle that has nearly been fully renovated and it does definitely look like it will be worth another trip to see it in its full glory.

Having finished at the castle we headed back to the cottage for a long soak in the bath, glass of wine for Martin, and the smell of lamb dopiaza to greet us.  Just got to get the rice on and time for tea and the semi final of The Voice.

Happy birthday Martin, I hope you had a lovely day.

Day 3 - Sunday
We woke up to another bright sunny morning and decided we'd spend today doing a caching walk of about 2 miles, just up the road, setting out from the back of the church.  Although it was only up the road, we did take the car, as we thought we may head off to the local tea room, in Barlow, after we had finished.

We also decided we would have a bash at making a film.  I bought Martin a video recorder for his birthday a few years ago and we've never really got to grips with it.

Today's walk was a series of caches, where you collected a clue from each cache, which when all put together gave you the co-ordinates to a bonus cache at the end.  We had a really nice walk round the woods.  It was very up and down and there was plenty of mud.

We found the first cache, and filmed the find.  We looked for ages for the second but had no luck.  From reading previous Cachers' logs it appeared that this one was quite tricky.  We gave it a good 20 minutes but gave it up as a bad job.  So, that's one clue for the bonus we were missing, would that mean we wouldn't be able to find it?

We carried on and managed to find all of the rest of the caches, even finding a trackable on the way. We took lots of film.  Goodness only knew what it would turn out like.

When we'd done the last one we found a conveniently located bench and tried to see if we could work out where the bonus would be.  Unfortunately, the number we were missing from our missed cache was one we really did need and there was no way of guessing what it could be.

We did read other Cachers' logs again and we could see that one set of Cachers who had missed the same cache as us had found the bonus so we thought we'd give it a go, as it did seem to be on the way back to the car anyway.

Basically GPS co-ordinates consist of 15 digits and we only had 14, so it was a case of working our way through the possibilities.  The first one drew a blank.  The 2nd and 3rd just didn't seem to offer viable alternatives.  We tried the 4th and it looked promising, though down a steep and muddy path, with a fallen tree to clamber over at the bottom.

We gingerly made our way down and scrambled over the tree and, bingo!!!  We were in the right place and the bonus was soon in hand. 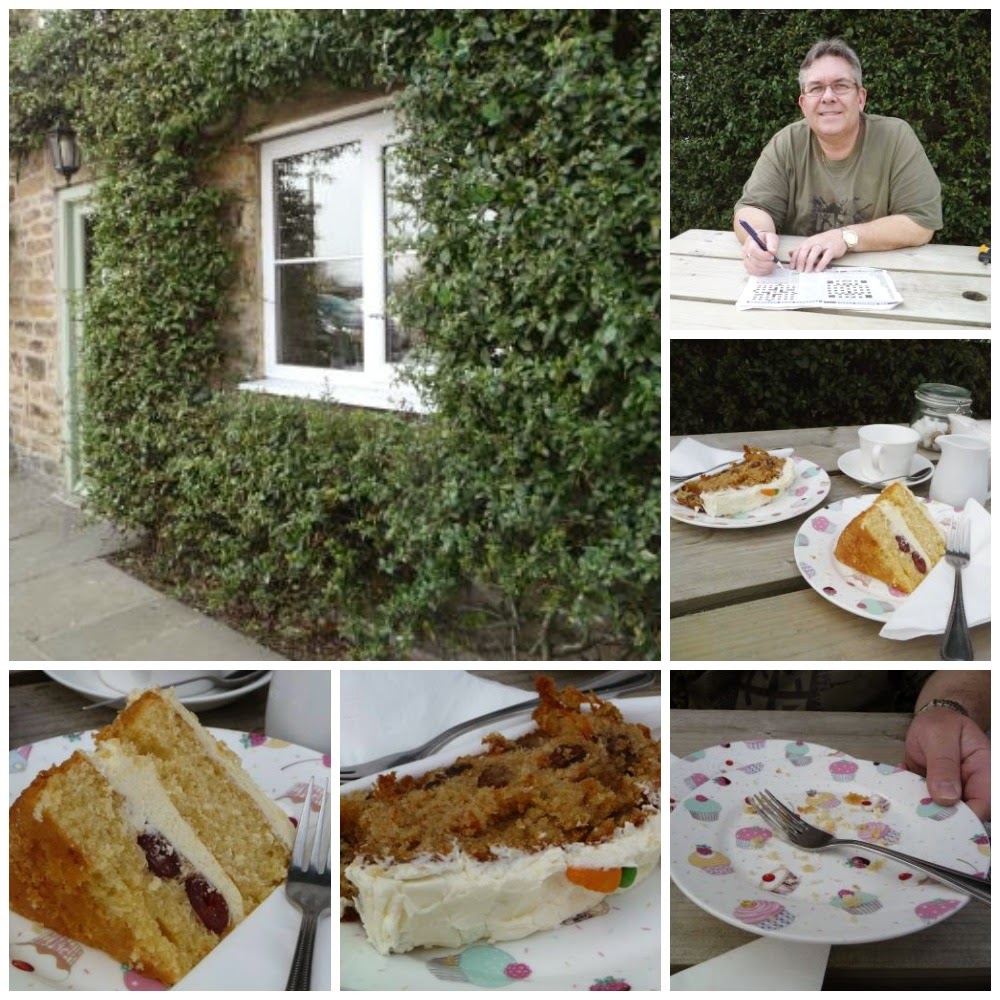 It was then a short walk, but uphill all the way, back to the car and a visit to the very highly recommended tea rooms in Barlow.  Well you can't do a caching walk without all the correct ingredients - Cachers, caches, mud and a treat at the end.

When we got back to the cottage we had a quick review of the film footage.  Oh dear, Steven Spielberg needn't worry about the competition.  Our opinion on our first view was boring, jerky and a bit staged.  And it's true what they say, the camera adds at least 5 stone!!  We will have our first go at editing when we get home and see if we can turn it into something fabulous - don't hold your breath.