Weekend Away - Ashbourne - The Peak District

Once a year we have a annual get together with some old work friends.  This is the third year we've met up and, whilst some friends were stopping in their caravan and some were travelling each day, we were booked into the River Cottage Guest House in Ashford-in-the-Water, which is not far from Bakewell.


We had a nice slow start to our weekend away in The Peak District and set off late morning on the Friday.

It wasn't the most auspicious of starts as I managed to fall out of the car onto the garage forecourt when we called in to use the cash point! Yes, I know, you will all be laughing, but it wasn't that funny at the time and I had a very sore knee, with a nice big graze, so not sure I would be to make our long walk that we had planned for the Sunday.

To put this into context, this is definitely a girl hazard just waiting to happen. I had my handbag in the footwell by my feet.  Come on, you know we all do the same. Well, I put one foot out of the car onto the ground and the other got caught in the strap of my handbag and I ended up unceremoniously in the floor. A big thank you to the kind man who was passing who stopped to see if I was OK, while my bemused husband was trying to work out where I was, as he couldn't see me from his side of the car.  Fortunately there are no pictures of the incident available!

Anyway, we were soon on our way and decided to stop off in Ashbourne en route to do a spot of Geocaching. There was what is known as a multi-cache in the town centre. This type of cache involves following a series of clues around a given area, collecting numbers which fit into an equation to give the co-ordinates of the final location of the cache.

We were really looking forward to our wander round Ashbourne.  It's a really pretty little town/village on our way to The Peak District, right at the start of the Tissington Trail, and it's one of those places we often drive through, but very rarely have a stop.  As we arrived, the heavens opened, which was a shame, but we still had a really nice walk, even though we got pretty wet. 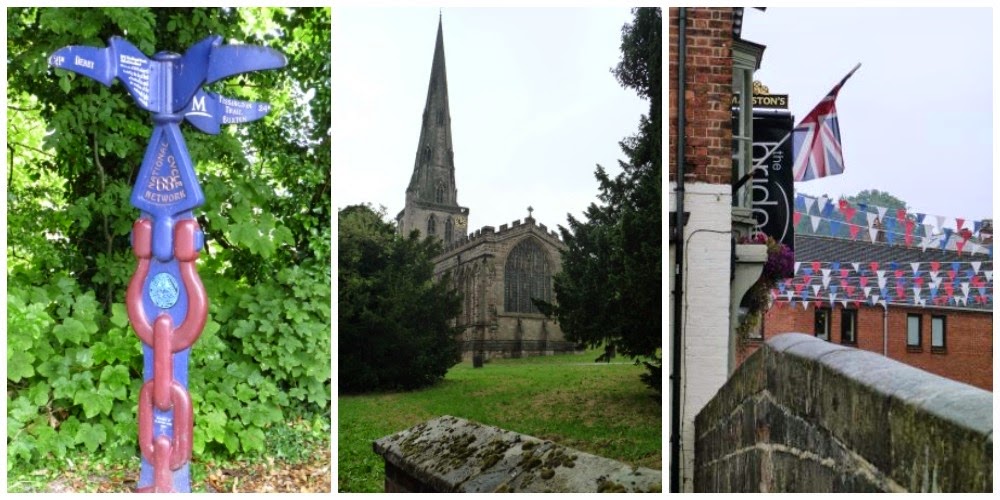 There were 8 clues in total, at different points of interest around the town centre, on a walk which was about 1.4 miles long.  We gave ourselves a well earned break, and a rest for my knee, towards the end of the walk, with lunch in the Flower cafe on the Market Square.

Fully refreshed and almost dry again we found the final information that we needed and managed to work out where the cache was actually hidden  Martin made a nice easy find, before heading back to the car, in more torrential rain, to continue our journey to River Cottage.

Email ThisBlogThis!Share to TwitterShare to FacebookShare to Pinterest
Labels: Beautiful Britain, Derbyshire, Geocaching, Life of Pottering, Out and About, The Peak District