Will Sidney's War - In Graylingwell

Will's own diary record and his official war record differ slightly in the date they show Will as coming 'Back to Blighty' from his second posting to France.

His personal diary shows this as being on 5 March 1917, his war record shows 8 March 1917, though this also shows him being admitted to Graylingwell hospital on 5 March, so these dates are a little uncertain.

What is certain is that sometime early in March 1917, Will was admitted to Graylingwell hospital in Chichester with pains in his head and limbs - or PUO, Pyrexia of unknown origin.

This wasn't Will's first stay in hospital whilst on active service.  His official war record also shows a stay in the Beaufort War Hospital in Bristol in 1916.  It seems that following Will's return from his first posting to France in June 1916 he was admitted to hospital with appendicitis.  He spent 96 days in hospital before being discharged on 16 September, just a couple of months before being posted back to France for the second time.

We have a few postcards which Will must have sent to Ethel during his time in Graylingwell.

Will was discharged from Graylingwell  on 20 April 2017, after being there for 45 days.  His next posting was to Sunderland from 30 April.  It appears that Will was late in reporting to Sunderland as his war record shows that he overlapped a furlough and was docked 2 days pay on 3 May 1917.

We know that Will visited Doncaster on his way through to Sunderland.  The two photographs shown below were taken of Will at F J Seaman's Photographers in Doncaster on 27 April 1917. Whilst we can find no evidence to confirm this, we are certain that Will would have spent some time seeing his family and Ethel en route from Graylingwell to Sunderland. 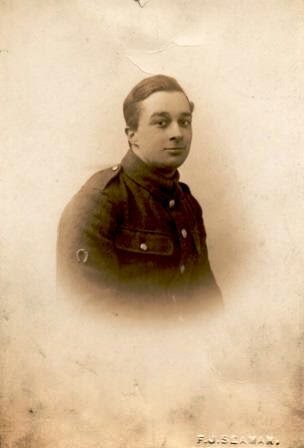 Will spent the rest of May and the beginning of June in Sunderland before being posted back to France, for the third time, on 9 June 1917.
Posted by Carol at 09:55