Geocaching - on a Mission!

It was the last Saturday in August and we were on a bit of a serious Geocaching mission.

Geocaching.com had set a challenge for all Geocachers for August. It was called the 7 Souvenirs of August and the challenge was to complete six different types of caches during the month to obtain six virtual 'badges' or souvenirs. By completing all six, a special seventh souvenir was unlocked.

There are a lot of different types of Geocaches that can be found.  The six that we were looking for as part of this challenge were a Traditional, a Puzzle, a Multi-cache, an Earth cache and a Letterbox cache.  The sixth part of the challenge was to attend an Event.  You can find out more about what the different types of caches consist of here, if you're really interested!!

As of 25 August we had obtained just three of the souvenirs, the Traditional, the Multi-cache and the Puzzle. As one of the remaining types of caches required was to attend a Geocaching Event, which we never had before and couldn't see that we would, we hadn't made any effort to obtain the other two.

However, thanks to some local GeoCachers, known as Moofnoo and Kyla & JJ, who put on a local event, which we managed to attend and obtain a further souvenir, we were now on four out of the six needed to unlock the bonus.

With only two left to do, all of a sudden, we were back in the game. The final two caches we needed to fully complete the August challenge were an Earth cache and a Letterbox type cache.

There are lots of other types of Geocaching challenges and we thought we might be able to kill two, or even three, birds with one stone on our caching foray. From looking at the map we thought we would also have a go at exceeding our previous number of different types of caches in one day, which was standing at four. We thought we should be able to get this up to five. So we sussed out another Multi and a Traditional cache which weren't too far out of our way and decided we would also pick up another Puzzle cache on the way home.

Those, coupled with the Earth and the Letterbox caches would give us our most ever different types of caches in one day.

As if that wasn't enough, we were also hoping that we would be able to pick off a few more squares on our Explorer 232 Challenge which seems to have ground to a bit of a halt of late. Now, this challenge is one we have been working on for some time. The challenge with this one is to complete caches placed in 232 grid squares of the Ordnance Survey Explorer 232 map, which is of the Nuneaton and Tamworth area. So far we had completed caches in 186 of the squares, so we still have a way to go with that one.

So once we had worked out what we were doing and had planned our route we started off with a Multi-cache based around the church in Witherley, a small village not too far away. For this cache we had to find a plaque regarding Queen Victoria and use the numbers on the plaque to give us the final location of the cache.

We parked the Geo-wagon up in the church car park and soon spotted the required information. It was then just a short but very pleasant stroll to Ground Zero (GZ) where Martin made a nice easy find to start us off for the day. The final location was a really pretty spot along the river, even though it was fairly dull today, and it was nice to return here as we hadn't been here for some time.

The last time we were here was for the village scarecrow festival a number of years ago. That time the church had been open and full of a congregation made up entirely of scarecrows.

That was one down, four to go. Having got the Multi under our belt we decided to pick up a Traditional cache, while we were on our way to Dobbies, a local garden centre, to make use of the facilities. When you have a bladder like mine you can't miss such a good opportunity!!

The location for this cache was another really pretty, but very busy spot, with lots of dog walkers out and about and grass cutting going on in the overlooking field. We had to hang around for a while, looking at the river, which was really clear and full of floating reeds and small fish, whilst we waited for a gap in the traffic. 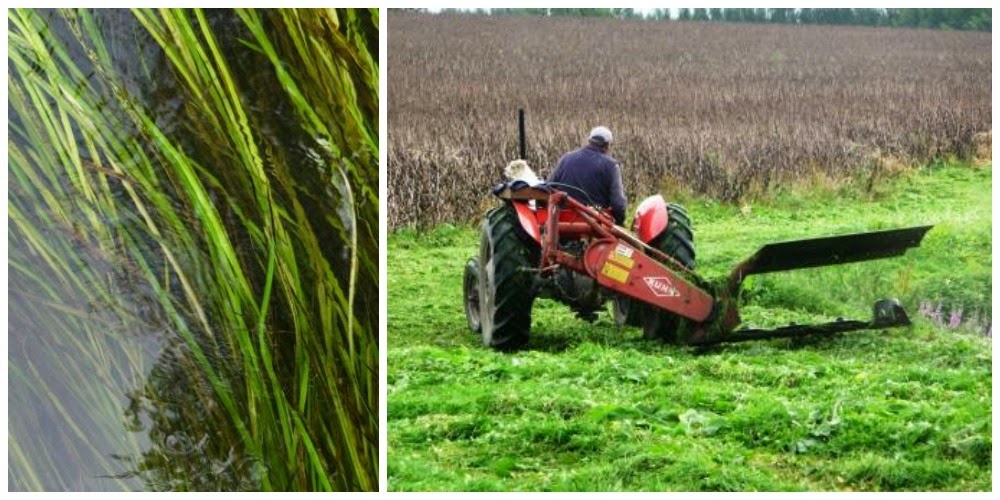 We were having a good old scrabble around when a friendly muggle neighbour gave us a shout and pointed us in the right direction. A muggle is someone who doesn't know anything about Geocaching. I know, a bit geeky, but hey it gets us out and about!

Now having got the Multi and the Traditional under our belts it was time for our Earth cache.

An EarthCache is a special geological location people can visit to learn about a unique feature of the Earth. Visitors to EarthCaches can see how our planet has been shaped by geological processes, how we manage its resources and how scientists gather evidence. Typically, to log an EarthCache, you have to provide answers to questions by observing the geological location.

The Earth cache we were looking to do is located between Nuneaton and Atherstone on a narrow Pre-Cambrian Volcanic ridge. At the cache location we were 524 feet above sea level right on what was the rim of the volcano that Nuneaton is built on the side of.

To claim this cache, we had to visit the site and take a photograph of us or our GPS at the site with the volcanic crater in the background and answer a question confirming which hard, volcanic rock has been quarried commercially near Nuneaton?  We also had to estimate to the nearest 5 miles the circumference of the volcano rim.

We parked up and, like others before us we wandered up through a plant nursery, which was a bit surreal, to say the least. There was a lot of random animal topiary made out of succulent plants. They were a sight to behold and we also saw what we think must have been Lady Godiva, though she didn't look very ladylike at all. I guess she was in her sitting on her horse pose, but without the horse!!

There wasn't too much mud today and we managed to make it to GZ easily for the requisite photo. It's weird to think that there was actually a volcano here all those years ago.

So we now had the Multi, the Traditional and the Earth caches under our belts.  We were hoping that the Letterbox would finish our 7 souvenirs of August challenge and bring us to four out of the five different types of caches we were hoping to do today.

We drove a bit further on and parked up on the side of the road.  We booted up for this one as we were expecting a bit of a walk and plenty of mud!! The first part of the path was not that clear today as the field had recently been ploughed, so we followed the GPS bearing and ended up in the right spot for the first part of this cache, where we had to find the co-ordinates for the final cache location.

Now this was quite easy to find but not so easy to retrieve. We were not to be deterred and resorted to Carol's nimble fingers combined with the trusty Swiss army to manage to find what we needed. I hasten to add that no damage was caused to either the surroundings or the cache in our hunt!

We carried on to the final GZ and have to give a massive thanks to a previous cacher known as BaggieWhite for his log, as this really brought the area to life and made us look at it differently to how we would have done without this bit of additional local knowledge.

When he had visited previously he had been lucky enough to be able to chat to the current farmer's wife, who gave him lots of interesting information about the spot.  It was originally the site of Harding Hall, though there is literally hardly anything of it left standing.  It was great to hear that they have had the last remaining part of the property pointed up so the brickwork remains sound for future generations to enjoy.  There is also a standalone pear tree which is the only one remaining from the original orchard, which is still hanging in there, though looking very sorry for itself, with not a pear in sight.  The current farmer has taken grafts and grown their own pear trees from this one.

We had lunch at this spot, sat at the bottom of an old oak tree before making our way back past the remaining original pear tree. This was yet another little spot that we would never have visited if it were not for Geocaching. 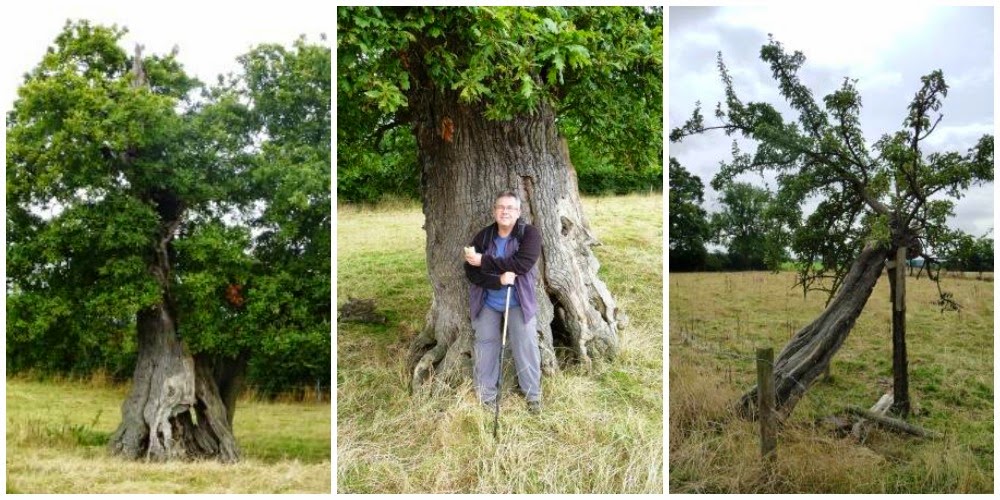 Having now got four out of the five types of caches we were aiming to do today under our belts, we were on a bit of a roll.  A Puzzle cache was to be our last of the day. We drove back towards home, parked up again and this time we had a nice walk along the canal to GZ before managing to make a fairly easy find for what had been a tricky little puzzle, which we had previously completed at home.

All in all we'd had a pretty successful day. We finished off the 7 souvenirs of August challenge, beat our previous numbers of different types of caches done in a day and picked off another five squares on our Explorer 232 challenge. Just another 41 to go. Maybe we will finish it before we hit 60!

Oh yeah, we'd also seen some lovely parts of the English countryside, had a couple of good walks, seen a bit of history and had lunch out!  What more could you want?
Posted by Carol at 11:47

Email ThisBlogThis!Share to TwitterShare to FacebookShare to Pinterest
Labels: Beautiful Britain, Geocaching, Life of Pottering, Out and About, Warwickshire