From our early research into Will's family tree, we knew that Will was one of seven children to Thomas & Ada (Grannie) Sidney.

Will had four brothers and 2 sisters.  He was youngest of the boys, with elder brothers - Thomas, Charlie, Harold and Herbert.

From our research on Ancestry.co.uk we had also established that Herbert was in the British Army during WW1.  He was a Corporal in the Kings Own Yorkshire Light Infantry.

We had also got the impression, from reading Will's diaries, that Charlie was also in the army during the war. 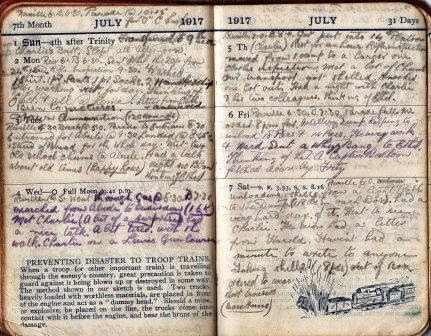 There are a few parts of the entries for this week that I have not been able to decipher.  Where this is the case I have included ?????

"5 Th - Reveille 7.0. B 8.0. Got put into 14th Platoon (Charlie). Rest for an hour. Rifle inspection. Moved from 1 camp to a larger one. Clothes inspection. Met a lot of chums. Our transport got shelled. Knocked one lot out. Had a night with Charlie & his two colleagues. Thinking of Ethel."

"7 Sat - Reveille 6.0. Unloading shells from a light rail to the dump. (118 lbs in each box). Had a very hard day of it. Went to see Charlie. He has had a letter from Harold. Haven’t had a minute to write to anyone. Taking shells (181bs) out of box. Ordered to wear short trousers. (Bare knees)"

We found it incredible to think that Will would have ended up in the same Battalion as his brother Charlie and that they would have met up in France.

Could this photo be the five brothers? 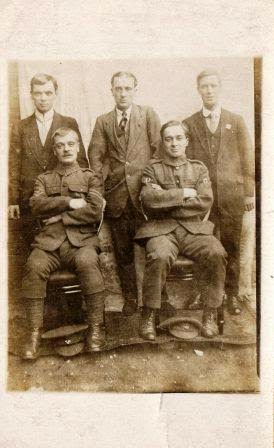 We know Will is on the right on the front row.  Could he be sat next to Charlie?  We really wanted to think he was, but feel it's more likely to be Herbert.  This is because of the Corporal's stripes, we know Herbert was a Corporal, from his war record, and the cap badge, which, whilst really difficult to view, looks to be more like the cap badge of the King's Own Yorkshire Light Infantry, than that of the York & Lancaster Regiment. 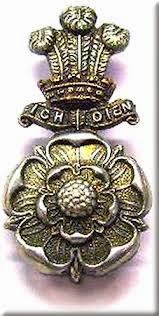 The picture must have been taken whilst before Will transferred to the York & Lancaster Regiment as his cap is sporting the cap badge of the Queen's Own Yorkshire Dragoons. 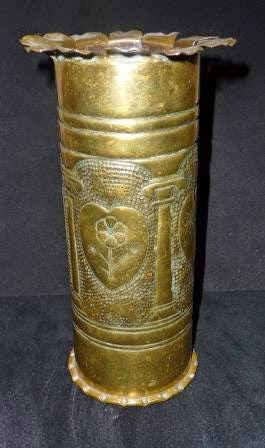 Our research tells us that a 'Whizz Bang' was a German shell casing and we know, from Will's diary, that he was working at the artillery dump, so would have had access to this kind of thing.

We found this in Peggy's possessions when she died.  Peggy was Will & Ethel's only daughter. Could this be the actual 'Whizz Bang' that Will sent home?

We were surprised that it would have been possible to have sent one of these home, considering the circumstances.

The base of the 'Whizz Bang' can be seen here.  The date it was manufactured is showing as Juli 1915, so it definitely fits in with Will's diary.  The GFSP marking, also showing on the base, confirms that the shell was manufactured by Geschoss Fabrik, Spandau. 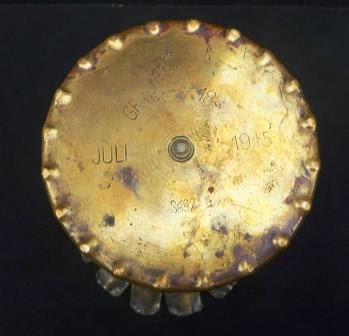 It's amazing to think that we have something here that was actually sent back, by Will, to Ethel, from the front.