Dartmoor - A Trip to the Coast - Dawlish & Teignmouth

On Thursday we woke up to bright sunshine and the coast was on the agenda for today, so we were off out early for us.

We started off in Dawlish, which I have only ever driven through so it was good to get the chance to have a good look around. There isn't that much to see but it is really pretty and the blue skies and sunshine made it feel really relaxing.

We had a walk down the Main Street to the sea front and then ambled along the front, past the jetty, to the brightly coloured beach huts, in the warm sunshine, taking plenty of pictures on the way.

The railway station in Dawlish is practically on the beach and it was fascinating watching the trains whizzing past, almost in touching distance, as they travelled along the coast, in and out of the tunnels through the cliffs.

This part of the coast took a real battering from some bad storms earlier in the year and it was good to see that all the storm damage had been completely repaired.

We picked up the first two caches of our holiday in Dawlish, one along the side of the train tracks and another on our walk back to the car through the park, which was teeming with all kinds of variety of ducks.

Most impressive were the black swans, which I have never seen before, but Martin tells me that Dawlish is quite famous for. They were moving so gracefully across the water, unfortunately a little too far away and facing the wrong way for a good photo call.

One of the chaps who looks after the river was clearing some weeds from the weir and, never one for passing up an opportunity, I asked him if he could get them to come and pose for a decent photo.  I was joking really, but he immediately began to whistle and, lo and behold, they gracefully made the way over.  Gob-smacked we both got the cameras ready and managed to get a few decent pictures that really captured their sense of regality. 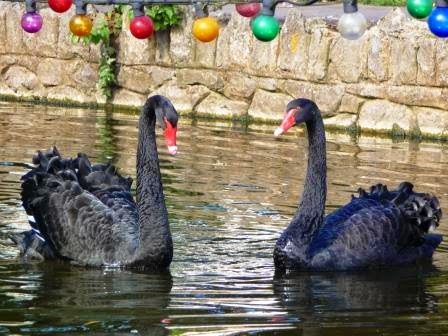 Again, we didn't do much other than have a really relaxing, slow amble along the sea front, picking up a few caches along the way, before stopping and sitting outside, looking at the sea, for a very late and chilled out lunch.

We then headed back for home, thinking we would definitely have to make a return visit as we'd only really seen a small part of the town.

Email ThisBlogThis!Share to TwitterShare to FacebookShare to Pinterest
Labels: Beautiful Britain, Dartmoor, Devon, Life of Pottering, Out and About