A lull in the Storm for Will

In my last post about Will Sidney's War it was 30 September 1917 and Will had been granted a day's sick leave as a result of straining his side.  This could be seen to have been a be a bit of a lucky injury for Will.

You can read the Battalion's official war diary entry, which was actually written in the field as events were unfolding, below ...

"About 4 am very thick mist; 4.30 am intense bombardment helped on with minewerfers & smoke bombs: 5.15 am enemy discovered in large numbers advancing against our trench especially on our right: mist still very thick: enemy used bombs and flammerwerfer. Heavy fire with rifles, Lewis machine guns and bombs was opened on them & none reached our trench: S.O.S. sent up but was not seen at Batt H.Q. owing to mist: an orderly arrived with the first news at 7.20 am. About 6 am enemy again attacked but was driven off: took 2 prisoners, 1 flammenwerfer & a machine gun: 60 or 70 dead were left in front of our trenches: the attack was repulsed entirely with the fire of the infantry: the artillery did not barrage our front: a wire fence, put up during the previous night by a pioneer battn helped greatly to impede the enemy. A short barrage was put down on our lines at 10 am: the remainder of the day was normal."

The card below was found with Will's things and is to commemorate the Division's actions at The Battle of The Menin Road earlier in the month. 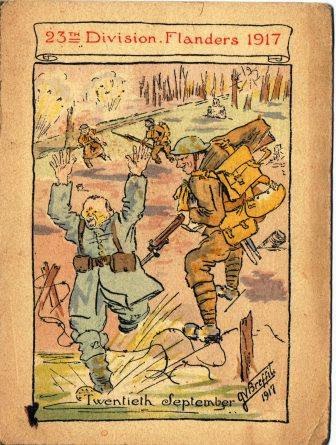 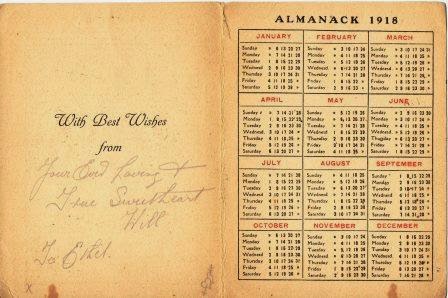 As you can see, Will sent the card to Ethel, though we have no way of knowing when it would have been sent.

On 1 October Will went to see the 'Doc' and was diagnosed with a compound fracture.  He was excused duties for 2 days and moved to Meteren, where he was placed in charge of the stores for 3 days.

On 3 October Will writes that the Battalion came in and had been badly cut up.  Who knows what may have happened to Will had he not suffered his injury when he did.

Following his stint in the stores Will acted as the Orderly Corporal for the Company.  He carried out this role until the 8th, when it seems he helped run a course for a group of NCOs.

On 9 October Will was back into the fray, having been dismissed after Parade, awaiting orders to go back up the line.  The Battalion went, by motor, to Ridgewood, for 1 night, before hitting the line again on the 10th.

You can read more about Will's next foray to the front line in my next post.