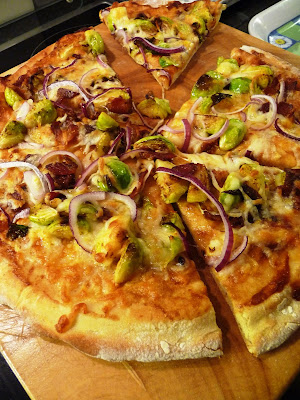 Still got sprouts kicking around?

Fancy doing something different with them?

Seriously ... why not try this Brussels sprouts and bacon pizza?

I've been meaning to share this recipe for ages, I know it may sound a bit random, but really, its pretty darn good ... and if you don't fancy the topping, I know you'll like the pizza base recipe as its just so easy.

The topping is a bit of an adaptation of a recipe that I found on a blog that I follow here.

Martin then discovered a fab pizza base recipe that has no actual yeast in it but always works an absolute treat. It's a Good Food recipe.


Basically you mix together the flour, yoghurt, baking powder and salt. We tend to do this with the electric mixer, with the dough hooks on, till the ingredients are all well combined.

Martin then kneads the mixture for 5-10 minutes until its a a nice smooth ball of dough.

It is quite a wet mixture but don't worry, just use plenty of flour for dusting when kneading and all will work out well. 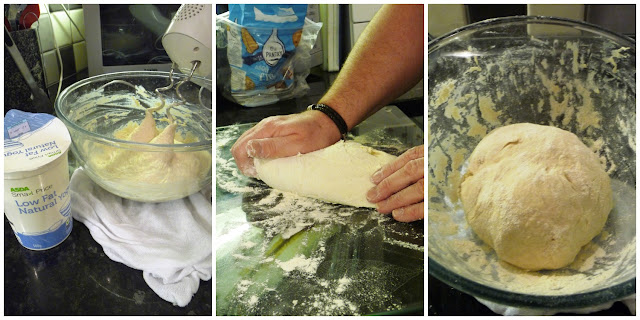 We then tend to leave the mixture for about an hour to 'prove', though it won't double in size as there is no yeast in the dough.

Once you are ready to use the dough then just roll and stretch it out to the shape that you want.

The thing that surprised us with this recipe, apart from there being no yeast, was the fact that you bake the pizzas in a 200c fan oven for about five minutes until they begin to rise, before you add any topping. 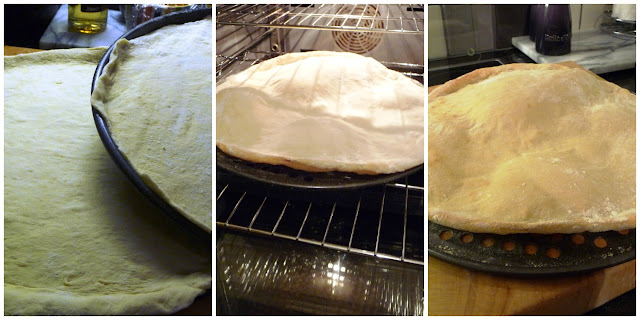 Then you remove them from the oven, turn them over and add your toppings before putting back in for another 5-10 minutes. 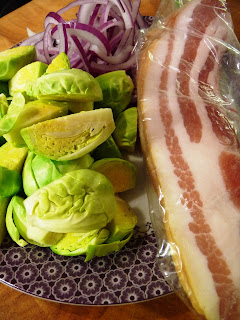 We have found that a just a couple of tablespoons of pizza sauce topping is plenty for each pizza and actually less sauce makes the pizzas hold together better when eating and all of the toppings don't just slide off.


Fry off the chopped up bacon, then add the quartered sprouts to the pan and fry until crispy.

When the pizza base has been cooked on the one side, as described above, remove from the oven, flip over and add your toppings.

We used a BBQ flavoured pizza tipping, from a jar I'm afraid, spread over the top of the pizza, topped with the fried bacon and sprouts, then raw thinly sliced red onion, before sprinkling with a liberal layer of mixed grated cheese. 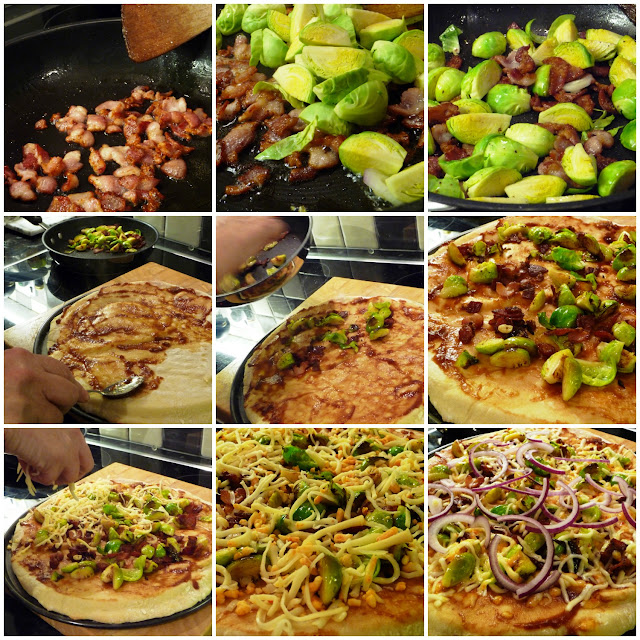 Email ThisBlogThis!Share to TwitterShare to FacebookShare to Pinterest
Labels: Comfort Food, Hand Made at Number 27, In the Kitchen, Recipes