We were looking forward to the Bank Holiday. For once, all of the family were around and we had a family BBQ at Number 27 on the cards. 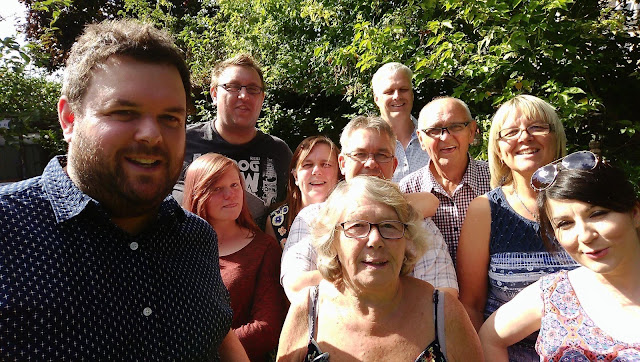 At the last minute we decided to also hold our own Garden Olympics. We'd scoured the garden for equipment and managed to come up with our own modern sextathlon!

Monday morning and Martin and I were up bright and early. There was lots to do ... food to prep, bunting to hang and events to lay out.

By the time everyone arrived the sun was shining, the flags were out, the umbrellas were up and the garden was looking pretty good for us ... 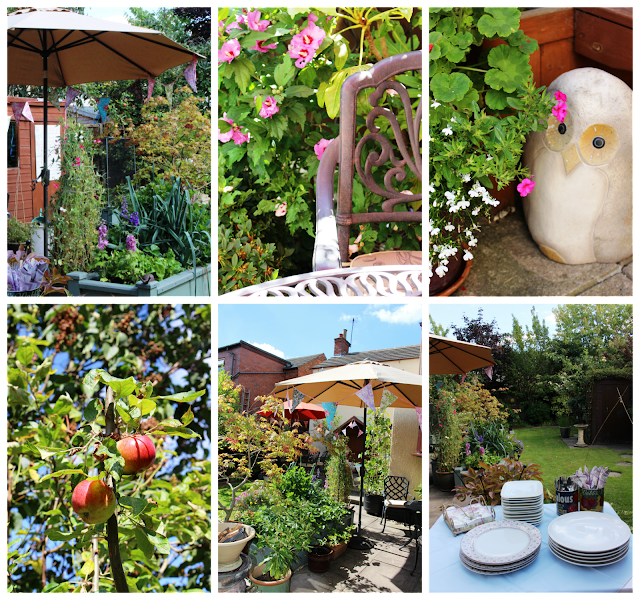 With still a bit of late summer colour ... 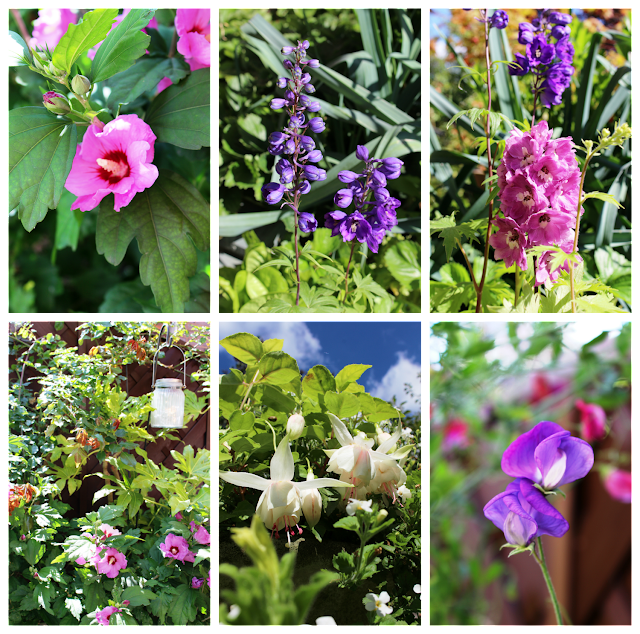 The events were all set up ... 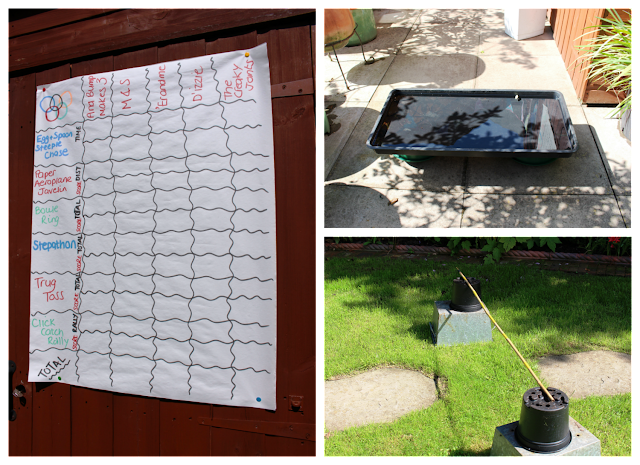 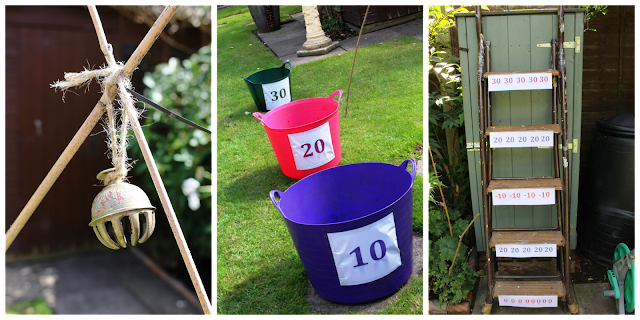 and Martin was just raring to go! 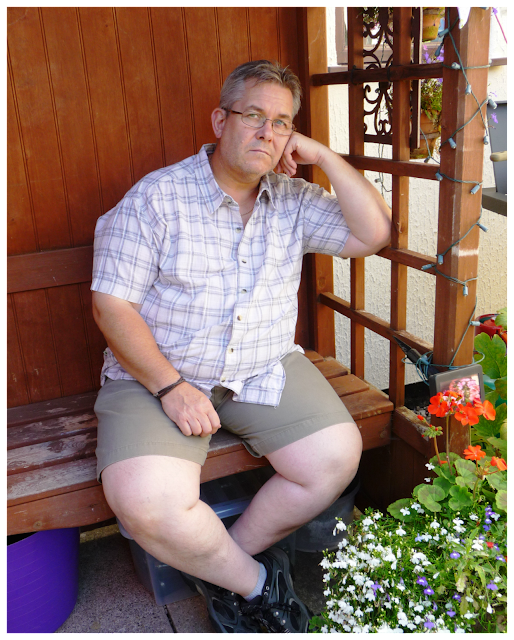 After the first full family selfie that we've ever managed it was time to begin proceedings with the egg & spoon steeplechase. This involved making your way round the garden, without touching the grass, ducking under the Buddhist arch, getting over the bamboo fence and the water jump and making your way back to the start, without dropping your egg, which was in fact an apple, but hey, I didn't want to be left with loads of clearing up. All against the clock. 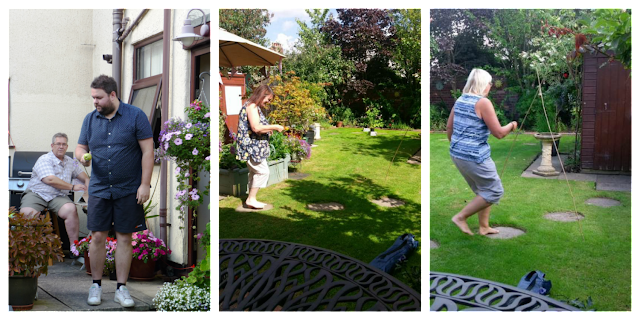 Dave & Alison managed to pick up the gold medal for this event, with Mum & Dad picking up silver and Dan & Lizzy the bronze.

Next up we had the paper aeroplane javelin and lots of serious R&D went into this one as you can see.

It was soon time for the throwing to begin ... 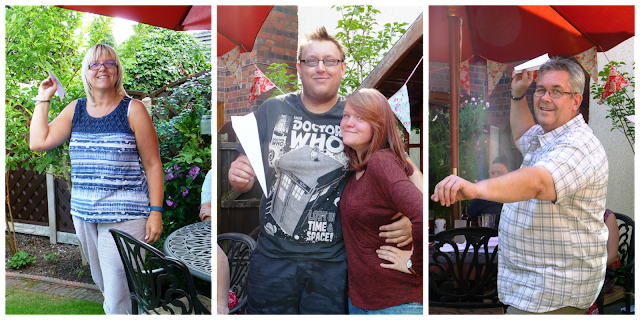 ... and following a bit of nifty radial measuring by Martin the gold for this event was awarded to Dan & Lizzy, with a stupendous throw of 31'10". Silver went to Martin & I, though I have to confess we had been practicing, and bronze went to Sarah & Mark, so now everyone had a medal and a score on the board.

Next up, it was time for 'Boule Ring', well we do live near Birmingham - you know, Bull Ring, see what I did there?

Well, Martin had scavanaged a roll of hose, which made for our ring and I had a very old set of boules in the shed, which hadn't seen daylight for quite some years.

Once we started practicing it was clear that the boules had seen better days, some were still the right weight and full of whatever it is that fills them, some were empty and very light and one was even cracked all the way round. It all just added to the difficulty of the event.

Mum & dad, being keen crown green bowlers would surely have this one in the bag. 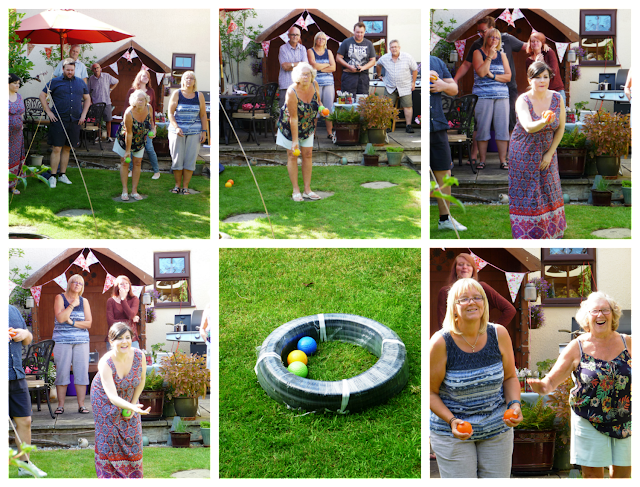 It was not to be the case, in spite of all their experience they only managed to pick up a bronze. The gold went, again, to Dan & Lizzy, who clearly have youth on their side, with the silver going to Dave & Alison.

So, we were halfway and the overall scores had Dan & Lizzy in the lead with 7 points, Dave & Alison in 2nd place with 5 points, Mum & Dad in 3rd with 3 points, followed up by Martin & I with 2 and Sarah & Mark with just 1 point.

At this point we decided it was time for a bit of a burger break and time for a good old play with the selfie stick. 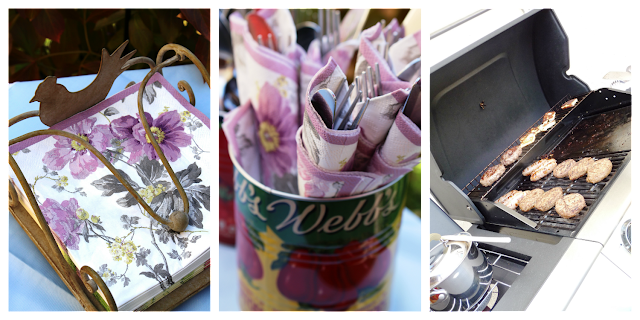 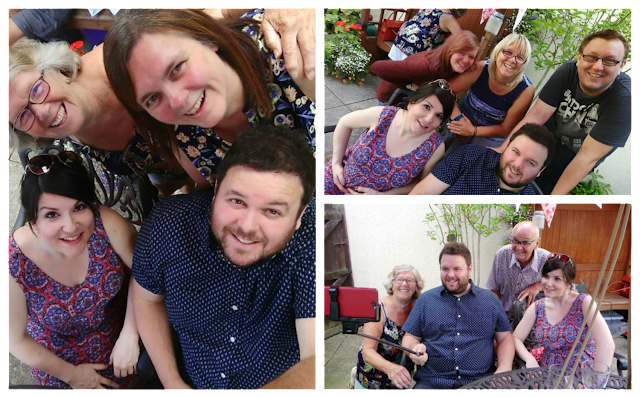 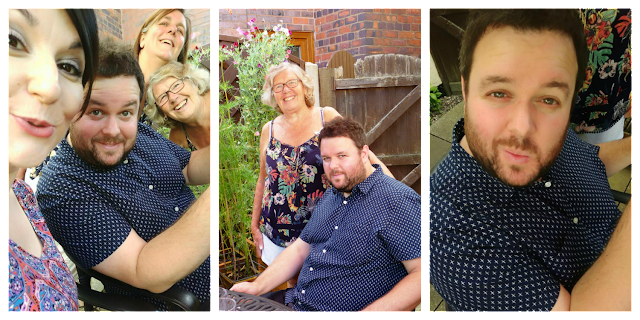 After a quick refreshment break it was soon back on with the rest of our Olympic events, starting with 'The Stepathon', another throwing game, which started off quite sensibly ... 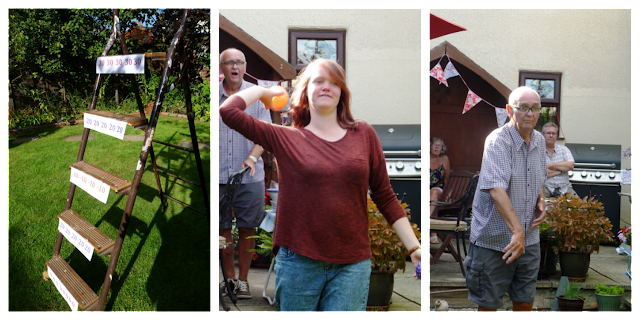 ... and then there was a debate as to whether or not it would be possible to climb through the top gap of the ladder ... 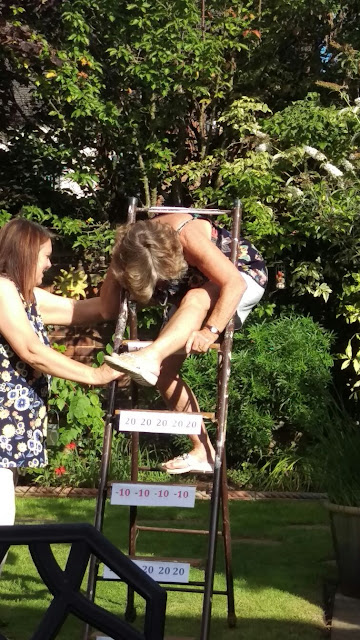 I did make a pathetic attempt but Mum proved that it was most definitely possible, though no extra points were awarded.

Gold for this event went to Dave & Alison, Silver to Sarah & Mark and bronze to Martin & I. By now I'd stopped writing up the scores, so have no idea what they were.

The penultimate event was called 'Trug Toss' and though everyone was looking forward to chucking trugs down the garden, this was not to be. 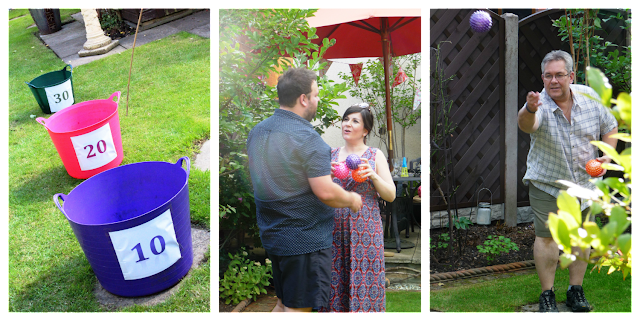 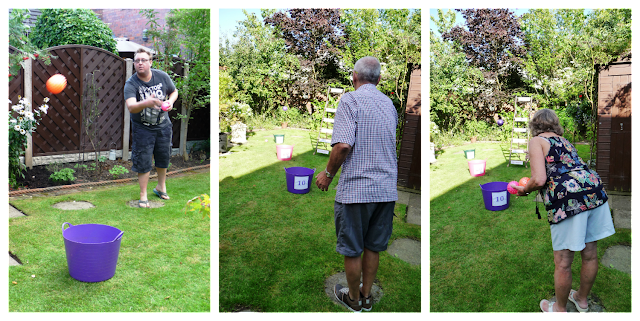 Going into the final event we had both Dave & Alison and Dan & Lizzy in joint lead with 10 points each, followed by Sarah & Mark and Mum & Dad on 4 points each. Martin & I were just making up the numbers, trailing at the back with just 3 points, obviously our practicing hadn't done us any good whatsoever.

It was all to play for on the final event of the afternoon, 'The Click Toss Rally'. We decided that we would count the number of catches in the longest rally in a 3 minute period and this would be added to the score so far, so all to play for.

Martin & I went first. We had practiced this and got really good, we could still be in with a chance. Well, we were rubbish, I couldn't stop laughing and was in danger of having one of those accidents that us more mature ladies have, and we managed to score 3 ... pathetic.

Sarah & Mark were up next and managed a pretty respectable 6, bringing their overall score to 7.

Mum & Dad were next and there was plenty more laughing and they managed to match our first score of 3, putting them on a final score of 7 ...

Now it was time for Dan & Lizzy, one of the contenders for the overall win ... 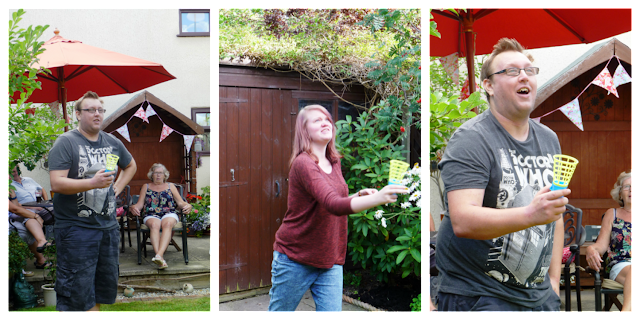 They put the rest of us to absolute shame, coming in with a massive rally of 12!!

There was only Dave & Alison left to go and it all depended on this very last game. Could they beat Dan & Lizzy's rally of 12?

It was getting serious, Alison was poised and we all know how much Dave likes to win. Could they do it? 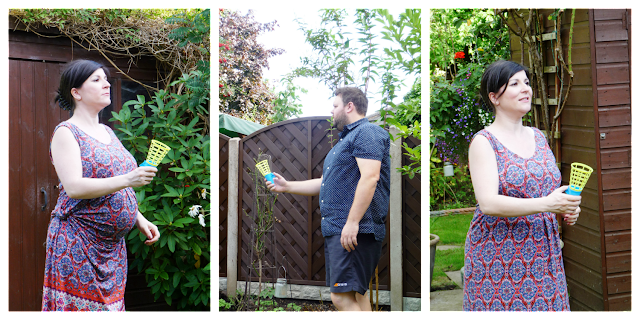 In the end it was not to be. in spite of managing a respectable rally of 9, they just couldn't beat the youth of Dan & Lizzy, who were crowned our overall winners of the afternoon ... 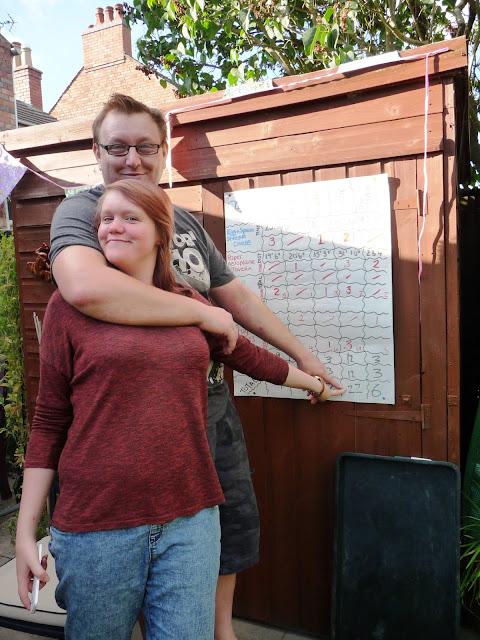 That was the fun and frolics over for the afternoon. Now it was time to chuck the chicken and fish on the barbie and restore our energy.

We'd had a lovely afternoon together in the garden. We spent the evening sitting on the patio, playing games and eating far too much.

It just goes to show that you don't need to spend a fortune or go very far to have a great time. Good weather, good company, good fun and good food. Seriously, what more could you ask for?
Posted by Carol at 15:14

Email ThisBlogThis!Share to TwitterShare to FacebookShare to Pinterest
Labels: Friends & Family, In the Garden, Life of Pottering, Tamworth, The Garden at Number 27