Whilst looking through Will's things I came across this letter, dated 1 September 1919, enclosing Will's preliminary issue of the British War Medal Riband and, whilst the timing is a little out of synch with my posts, I really wanted to include it ... 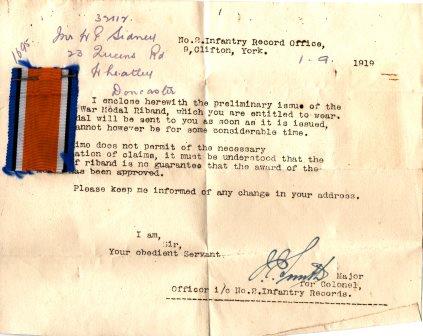 He is still suffering with problems with his neck and has now been in hospital for about six months ... 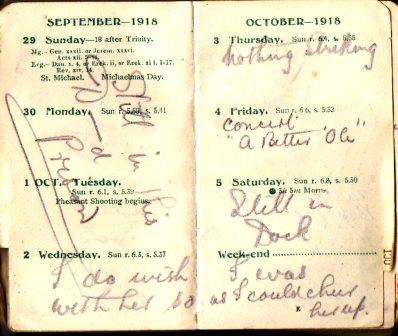 Other than telling us that he wishes that he was with Ethel, Will doesn't have much to say during these first few days in October, though he does write of the weekly concert "A better OC", where he plays the part of  'Old Bill' and is also involved in singing, comedy conversations and an impersonation of the London Music Hall artist 'Harry Weldon'. 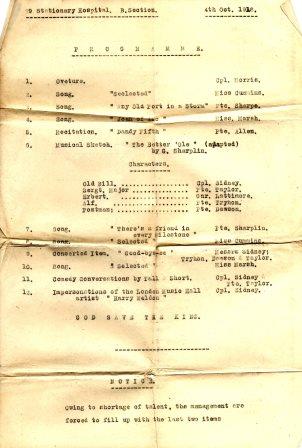 There seems to be some better news for Will the following week ... 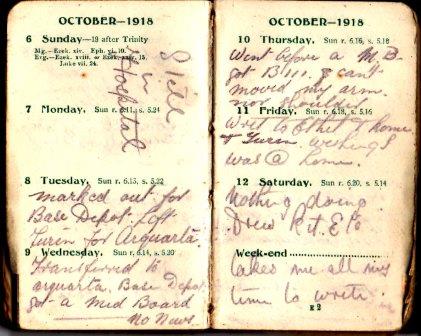 "8 Tuesday - Marked out for Base Depot. Left Turin for Arquata"

"9 Wednesday - Transferred to Arquata Base Depot. Got a Med Board. No News."

"12 Saturday - Nothing doing. Drew kit. Takes me all my time to write."

It seems being marked B111 (which I assume to be a B3) would indicate that whilst Will has been assessed as being free from serious organic diseases, able to stand service on lines of communication in France, or in garrisons in the tropics, he is only suitable for sedentary work. 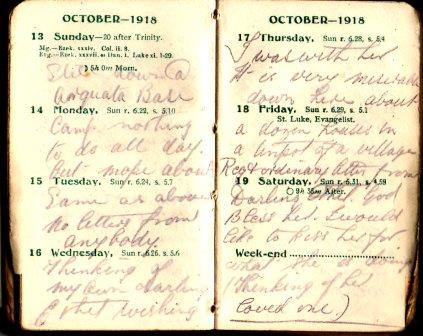 "15 Tuesday - Same as above. No letters from anybody."

"16 - 19 Wednesday - Saturday - Thinking of my own darling Ethel, wishing I was with her. It is very miserable down here. About a dozen houses in a tinpot of a village. Reg & ordinary letter from Darling Ethel. God bless her. I would like to kiss her for what she is doing (thinking of her loved one)." 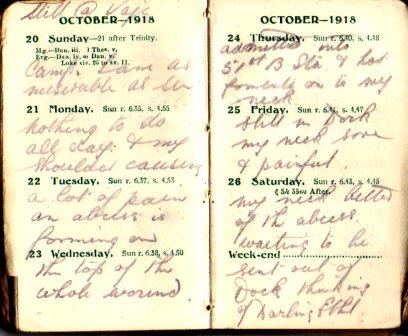 "20-23 - Still @ Vaje Camp. I am as miserable as still nothing to do all day & my shoulder causing a lot of pain. An abscess is forming on the top of the whole wound."

"26 Saturday - My neck better of the abscess. Waiting to be sent out of Dock. Thinking of Darling Ethel." 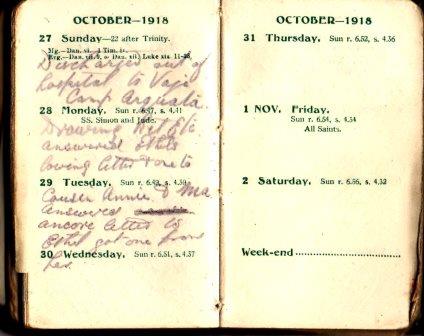 "27 Sunday - Discharged out of hospital to Vaje Camp, Arquata."

"28-30 - Drawing kit etc. Answered Ethel's loving letter & one to Cousin Annie & Ma. Answered another letter to Ethel, got one from her"