I still have plenty of posts to share from our recent holiday in The Cairngorms but I thought I'd have a bit of a change this week to let you know about one of our recent  National Trust visits. 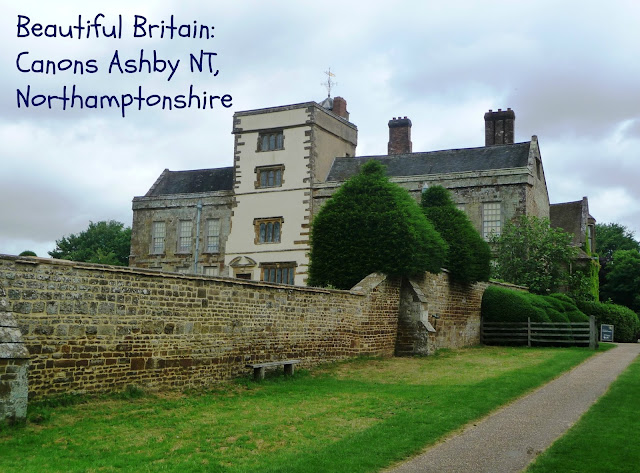 We were meeting up with Sue and Ken, family from Peterborough, for lunch and we tend to try and find a meeting point about half way between us. The last couple of times we have met at Foxton Locks but this time we just fancied a change. As we are all National Trust members, we decided to see if there was anywhere that met the bill.

Canons Ashby near Daventry seemed to be exactly what we were looking for. It was Ideally placed, about an hours drive for all of us, and none of us had visited before, so it would be a bit of an adventure. 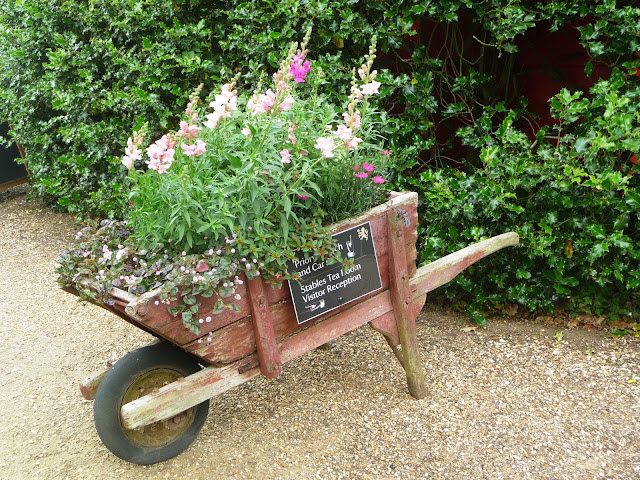 The Trust describe the property as "A tranquil Tudor manor house set in rare terraced gardens, with the 'antient' Dryden family at its heart." I won't lie, I had to look up what on earth 'antient' meant. Apparently it's an obsolete way of spelling ancient ..... Who knew?

Anyway, the main thing was that there were tea rooms, so that was lunch sorted and there was somewhere to hang out if we were early.

We had a really good run along the A5, though it does look like there are some serious roadworks under way, which I would guess would make for a heck of a journey when they are in full swing, though, being a Sunday it was nice and quiet.It took us just over an hour from Tamworth so definitely doable for a nice day out from our part of the World.

We were a bit early so parked up and headed for the tea rooms, via the plant sales area, which would definitely be getting a good look at later. 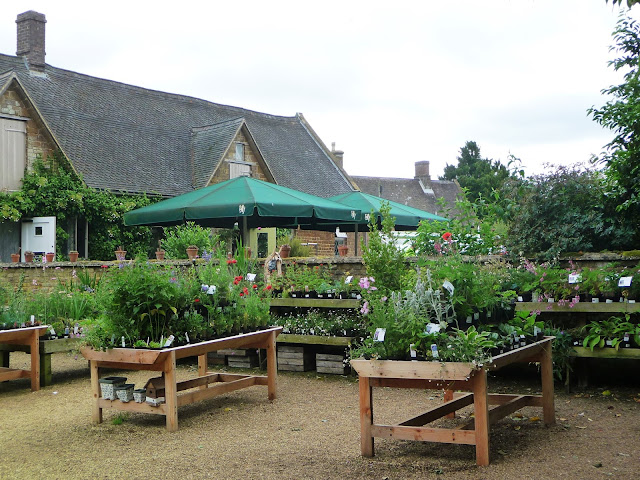 The weather was lovely so we managed to sit outside and chill whilst waiting for Sue and Ken to arrive. We didn't have to wait long and after a good catch up, accompanied by drinks and snacks, it was time to explore. 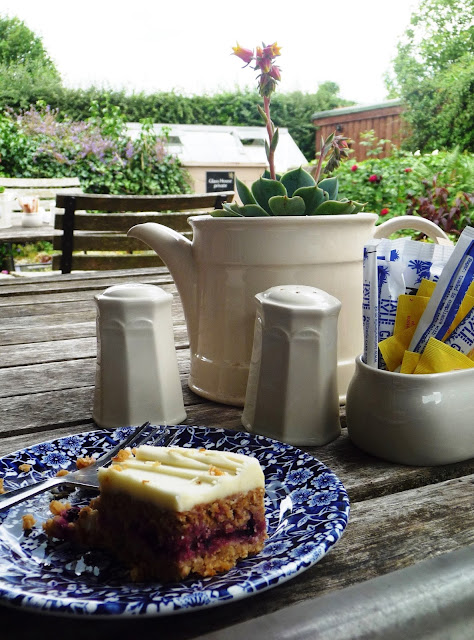 The house doesn't open till 1.00pm so we had plenty of time for a good wander round the gardens first.

We all loved the gardens, there is definitely more to them than first meets the eye, and we all took lots and lots of photos, especially of plants that we might like to try and find for our own gardens back home.

When you first enter the garden you are at the top of, what seems like, a very formal terrace. 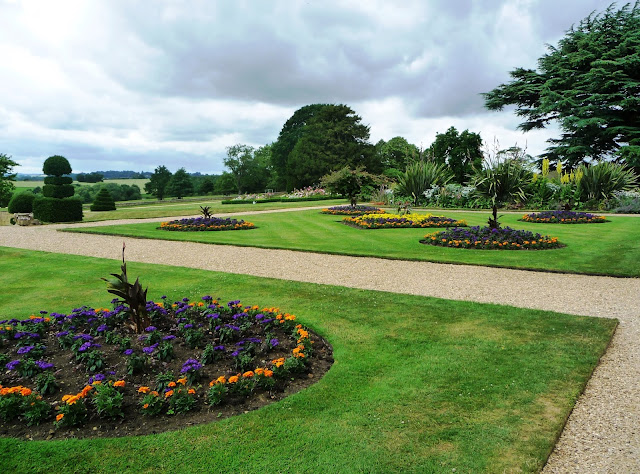 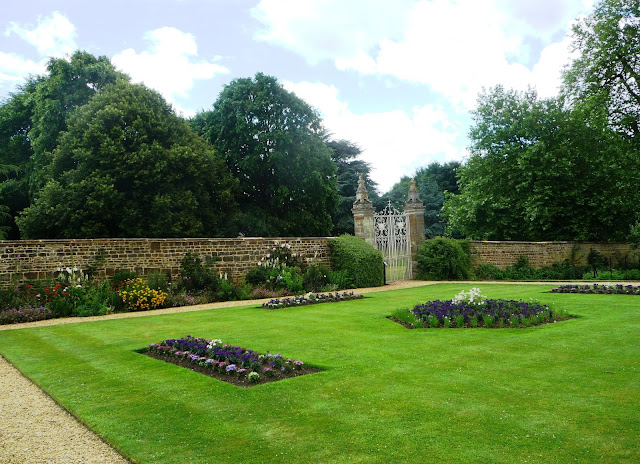 There were some great views to be had of The Priory Church beyond the garden wall. 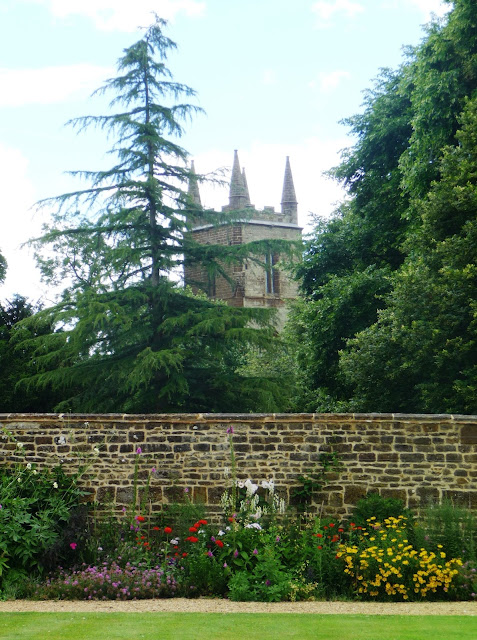 Wandering down the slope, from the formal part of the garden, into the vegetable patch, the formality completely disappears, with lots of fruit and veg growing alongside cottage garden plants all watched over by Mr and Mrs Scarecrow. 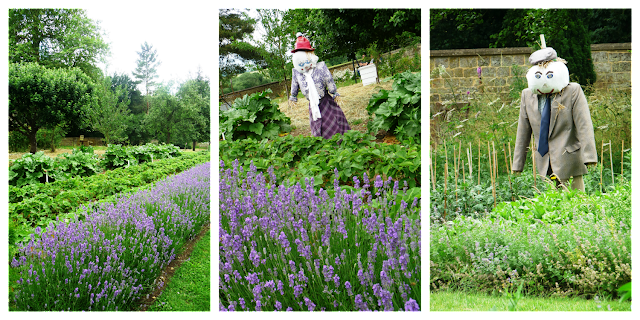 We made our way down to the bottom of the garden, through the middle of the vegetable patch ... 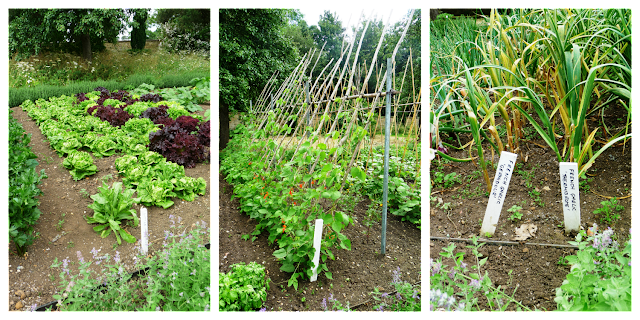 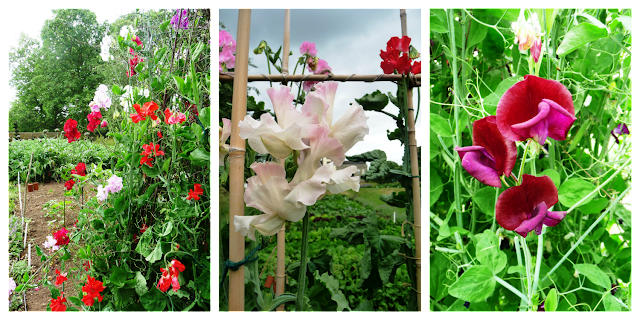 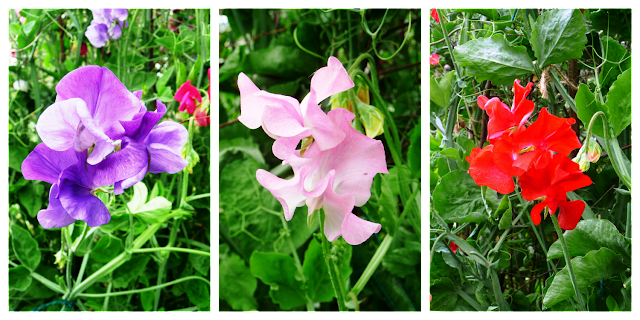 ... and then came back up along the wall of the garden, where we found plenty of photo opportunities within the herbaceous border. You know you are getting old when you know what the majority of the plants are, though there were a few that none of us had come across before. 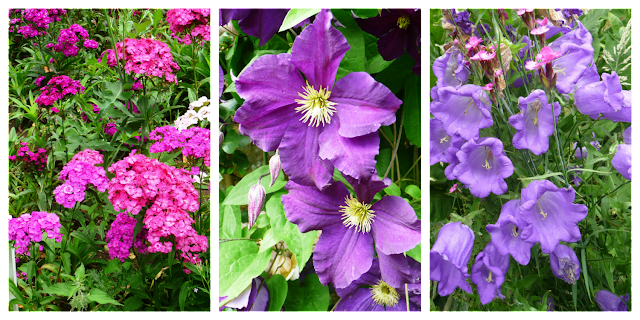 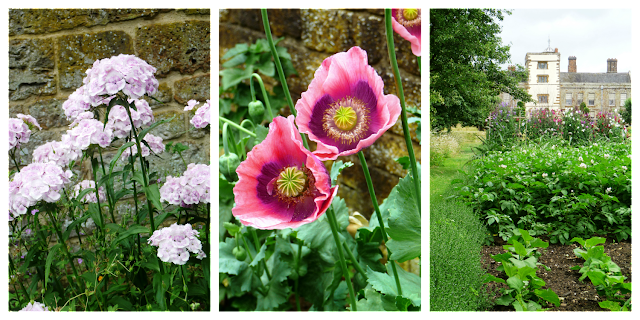 Back at the top of this part of the garden we headed left around another patch of garden, where we managed to dodge a quick shower by taking cover in the rain shelter. 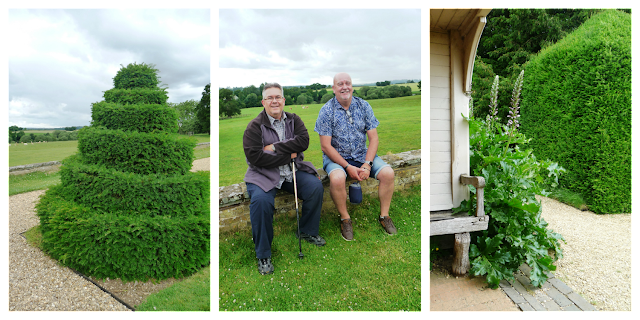 The view of the house itself was really good from this side of the garden and I did manage to catch a shot with no people in ... result!! 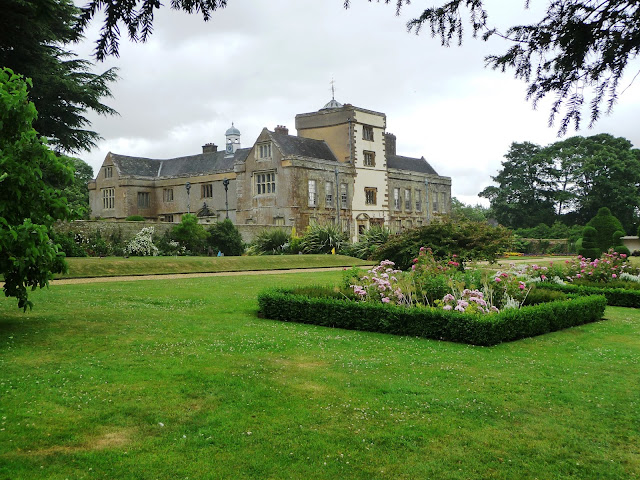 Once the rain had passed it was back out and up to the back of the house, where a gateway draws you into yet another part of the garden - Green Court. This court originally served as the main entrance to the house until 1840, when it was turfed over. 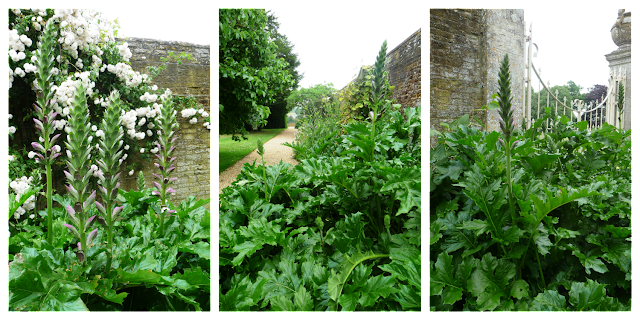 This part of garden is at the far side of the house and was completely different to what we'd seen already. There are two fabulous borders to admire. One with more herbaceous planting leading your eye to the side view of the house ... 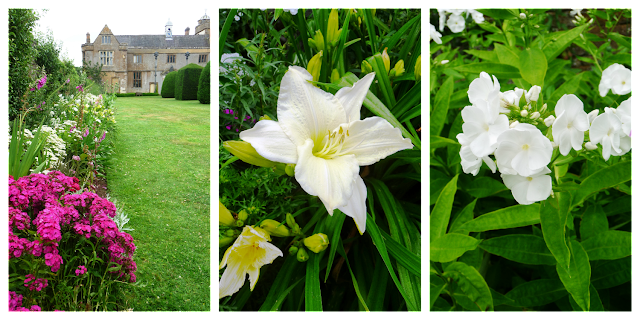 The border on the opposite side of the garden was completely different. The fern border contains over 31 different varieties of fern and there is lots of lush greenery ... and as you can see we had to break out the brollies again ... 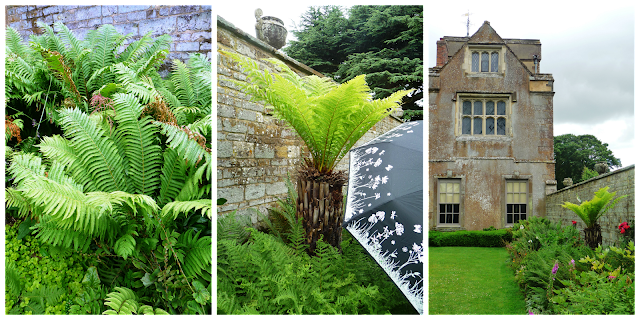 In between the two borders were rows of neatly clipped yew hedges, framing a statue of a shepherd boy which apparently honours the actions of a shepherd during a Civil War skirmish at Canons Ashby. 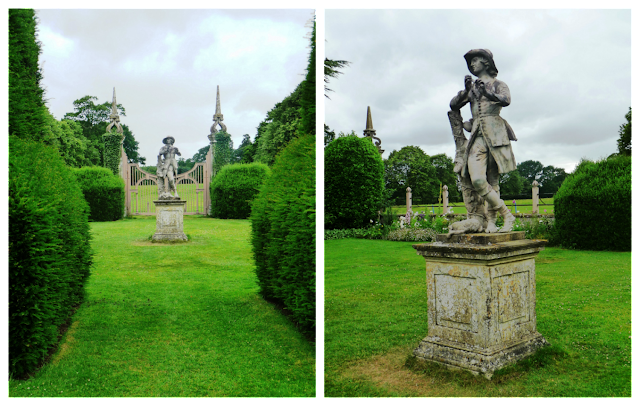 We followed the fern border, along the wall and back to the gateway leading us back into the main part of the garden. 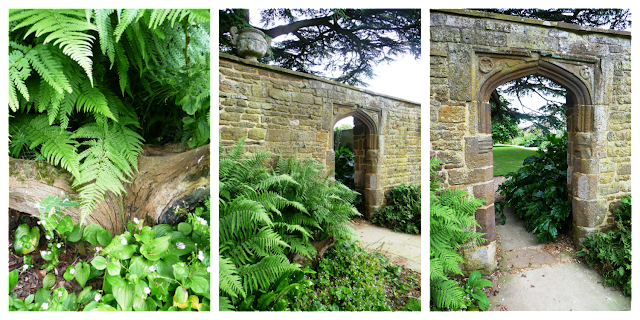 There was then just one more bit of garden to admire as we made our way back, past the croquet lawn and along the side of the house, where there were more fabulous views of the church, across yet more herbaceous borders. 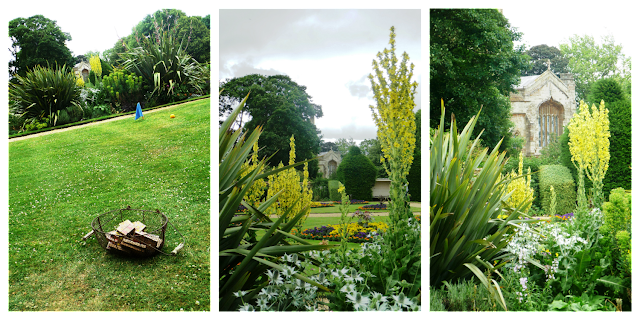 We found more plants that we had no clue as to what they were, but took pictures in the hope that all may become clear via Google once we returned home. 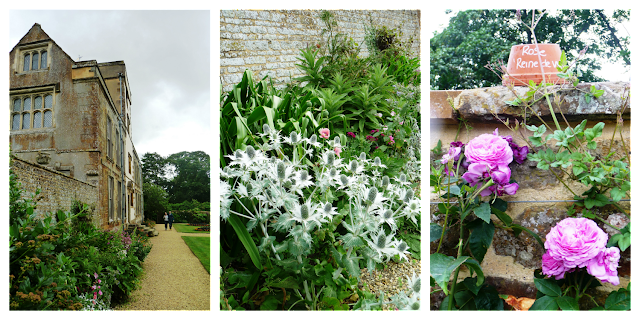 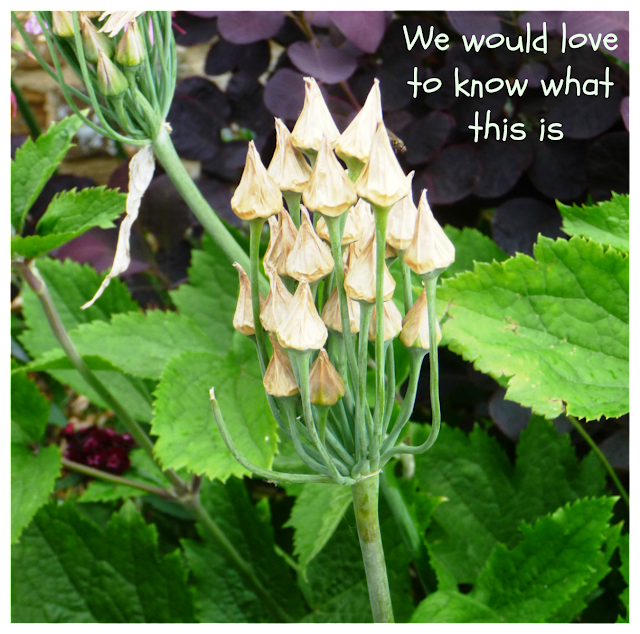 We'd spent a good hour wandering around the gardens and the house was now open. We decided to miss the initial rush and headed back to the tea rooms for lunch. There isn't a massive choice on the menu but we all made do very well with jacket potatoes and a good opportunity to shelter from another rain shower. 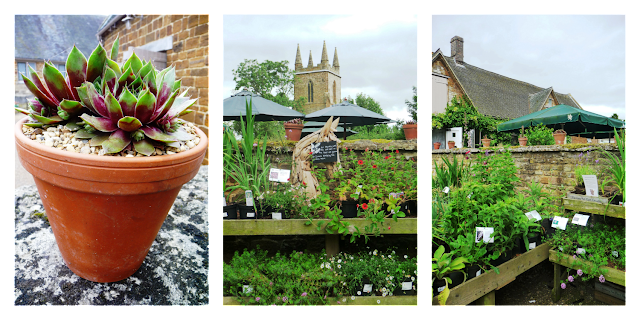 Refreshed, we headed back to the house to explore.

It's what I would call a medium sized property with a good few rooms to explore.

There wasn't much opportunity for photos inside, but there was plenty of evidence of the garden fulfilling its role for providing cut flowers. 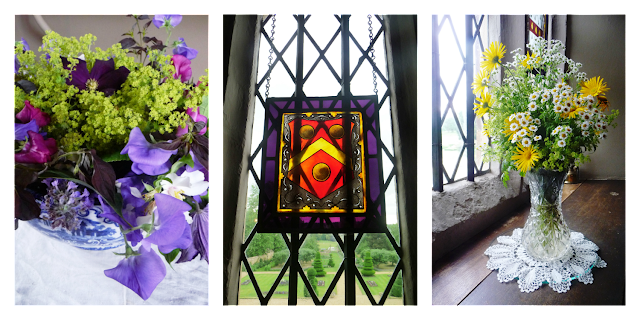 After our look around the house it was a short walk across the road to have a look in the church, which was very simple and calm, with plenty more flowers from the garden. 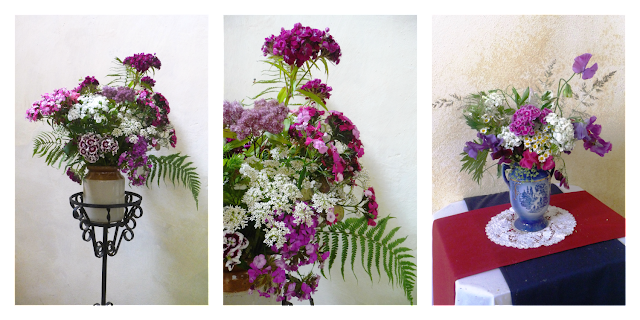 Other than our last call at the gift shop and plant centre, where we couldn't resist the tall spiky flowers of the Francoa Sonchifolia, that was the end of our visit today.

So that's another NT property off our list and another that we would all be more than happy to recommend as being well worth a visit for a lovely day out.
Posted by Carol at 11:26

Email ThisBlogThis!Share to TwitterShare to FacebookShare to Pinterest
Labels: Beautiful Britain, Canons Ashby, Friends & Family, Life of Pottering, National Trust, Out and About