Caching on the Haggis Highway - #2

I promise that this is the very last post from our week's holiday in Scotland back in June, I can't believe it was quite so long ago.

With everything else we got up to and all of the places that we visited, we didn't have a lot of time for Geocaching, though we did manage spend one day on a bit of a road trip.

When Martin and I visited a couple of years ago we spent a fair amount of time hunting for a series of caches on 'The Haggis Highway' and we wanted to see if we could get a bit further north this time.

We started off by heading towards Tomintoul on the A939, The Old Military Road, and our first real stop was at the viewpoint for Corgarff Castle. 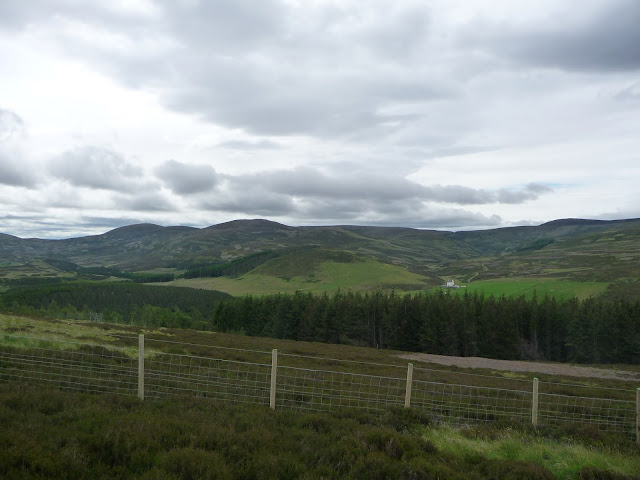 You can just about see the castle there in the distance.

We couldn't quite understand how we'd missed this one on our last trip as we stopped at this viewpoint, but it appears that this cache had been placed after our last visit. 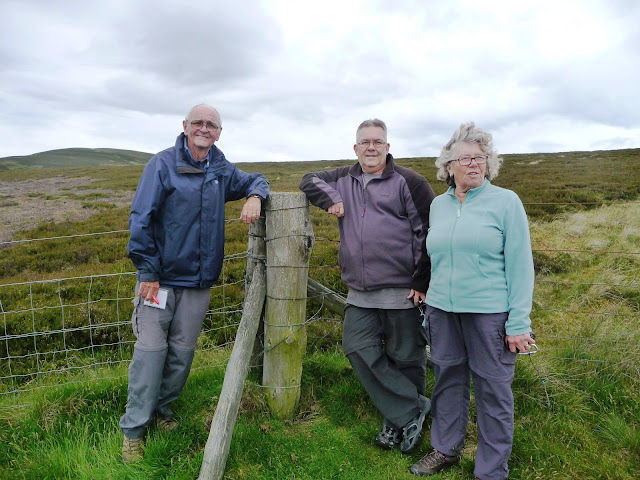 It was a really good multi, where we had to collect information from the inscription on the standing stone to help us work out the co-ordinates for the final find. It was quite a busy little spot, with lots of people pulling in to take in the view, so it took us a while to manage to sign the log, before we were back on our way. 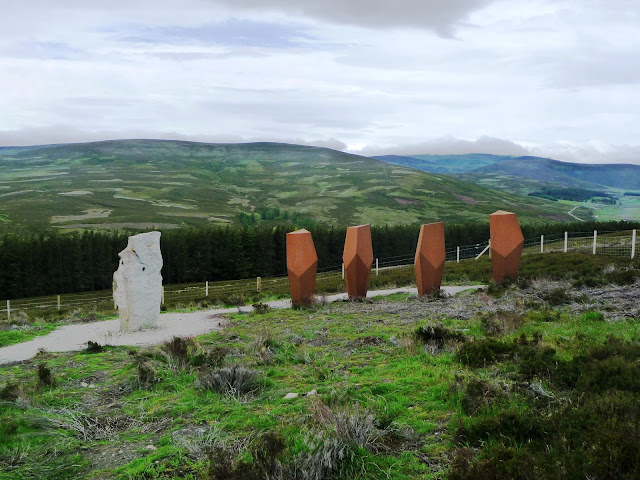 There is a hole bored into the standing stone, which you can look through for an intriguing view of the castle ... 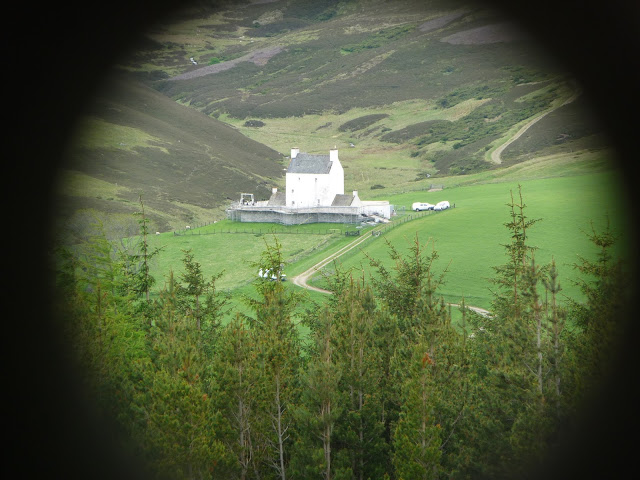 The rusty looking metal sculptures are actually seats, where you can just sit, sheltered from the wind, and take in the view ... 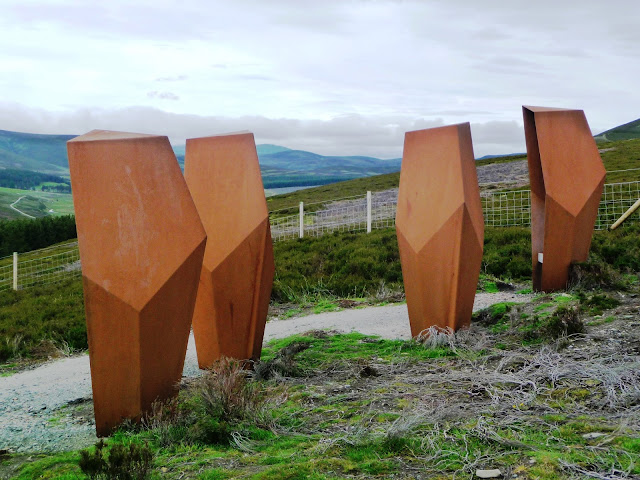 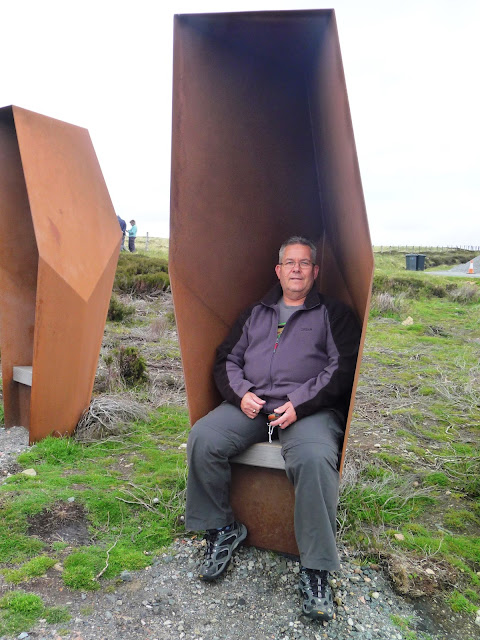 We carried on heading North towards The Lecht Ski Centre for our next stop. This was as far as we had made it on our last visit and it looked very different today. On our last visit the whole area had been sheathed in thick mist ... 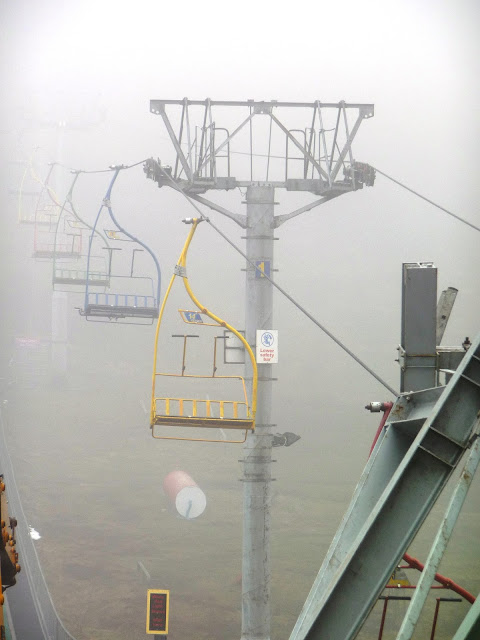 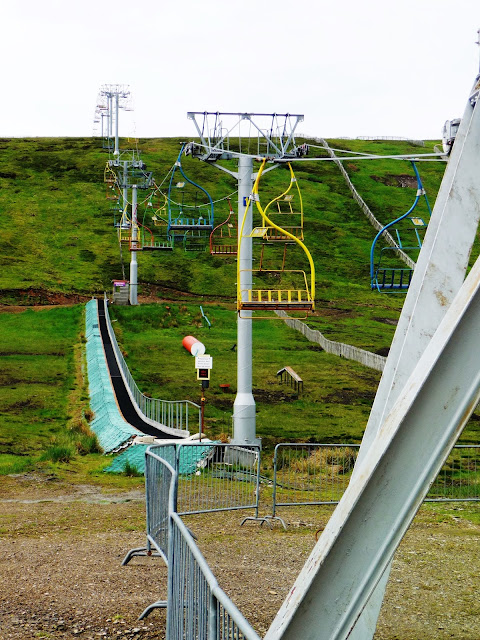 I couldn't resist snapping the first signs of Christmas, maybe just a little tacky but hey ... 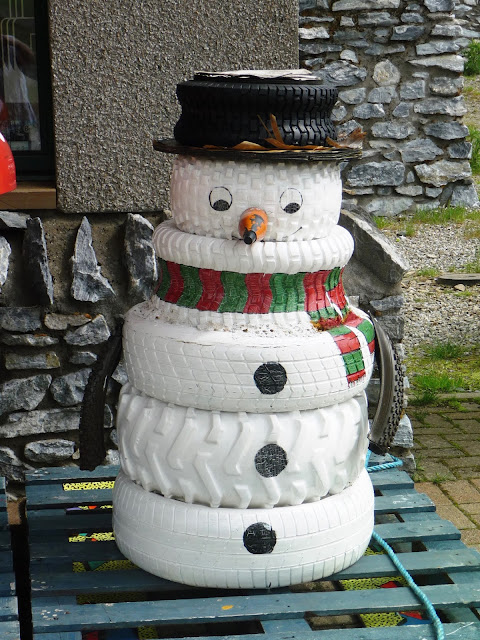 From The Lecht it was all new ground for us and our next stop was a short distance along The Old Military Road at an old disused manganese mine. 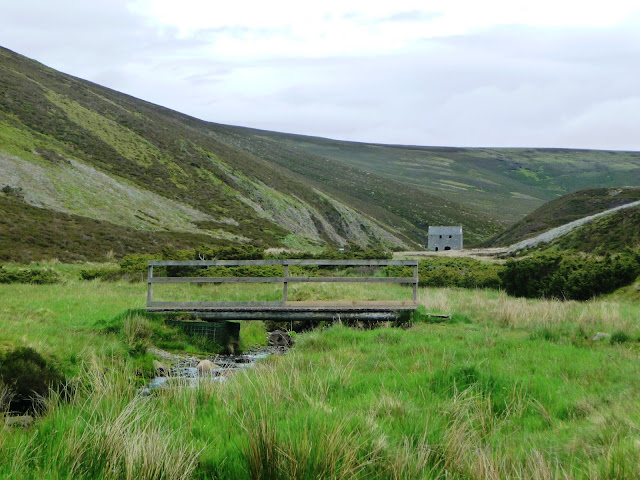 It was a lovely little spot and yet another place that we would probably have driven straight past if not for Geocaching. We took the short walk out, along the stream, to the old mine and tried to imagine how it would have looked and operated all those years ago. 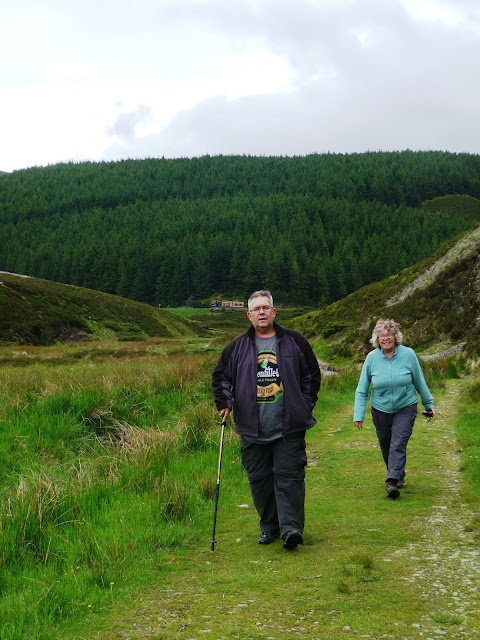 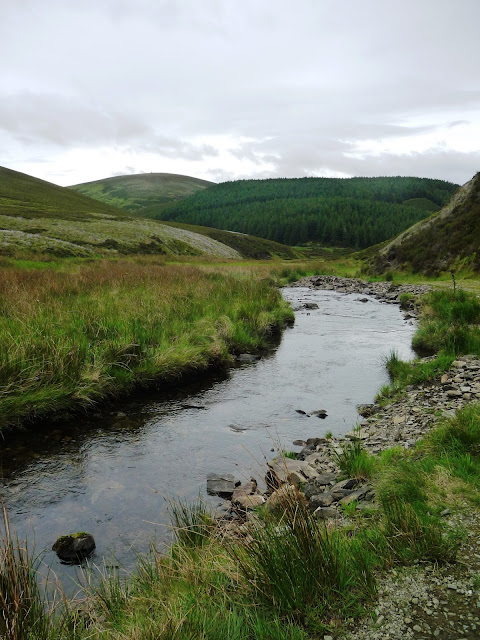 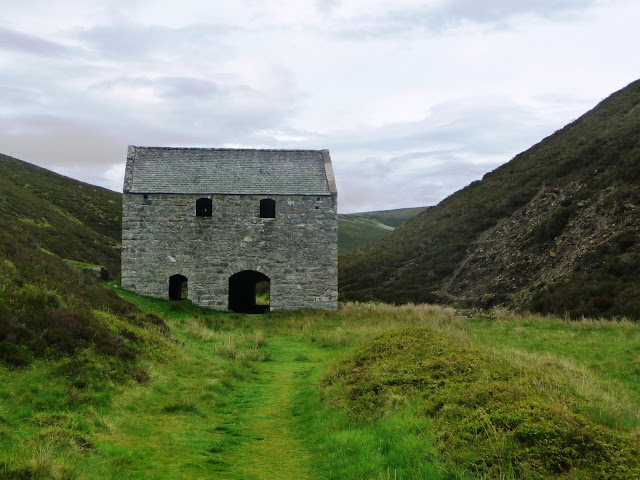 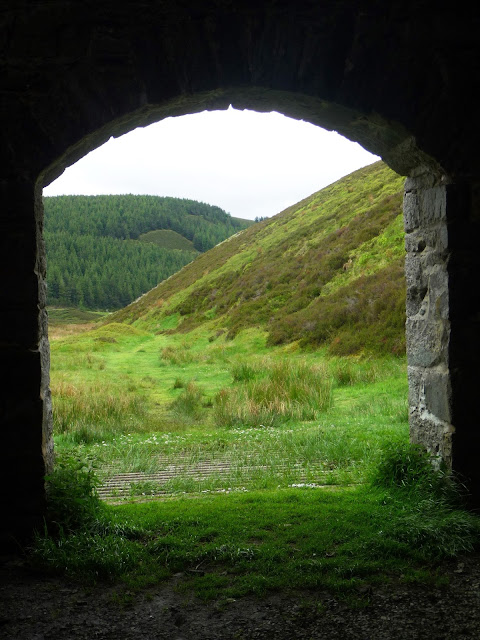 From here we continued our drive into Tomintoul, stopping every now and again to pick up the odd cache along the way.

In Tomintoul we headed straight into The Old Fire Station tea room for a quick refreshment stop, whilst we planned our route back. 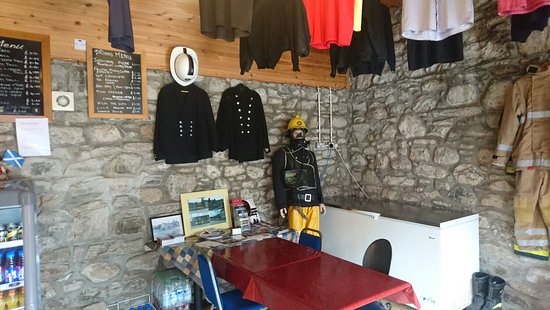 We decided we would continue north, heading for Glenlivet and then begin to make our way back.

There were caches to be had at regular intervals but we decided that, as time was getting on and we had a good drive back, we would only stop for the odd one or two.

We started with The Soldier's Stone. This is literally a standing stone by the side of the road, with the date 1690 etched into its surface. It marks the site where a soldier fell after the battle of the Haughs of Cromdale in that same year. 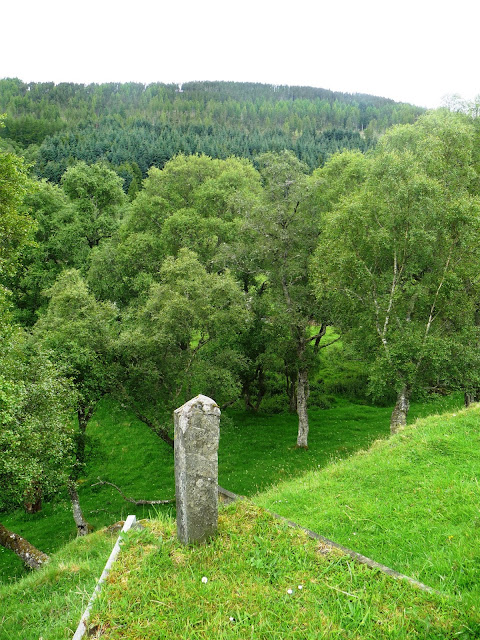 This is literally all there is to see, but it is such a fascinating story we are so glad that we managed to stop and have a look. 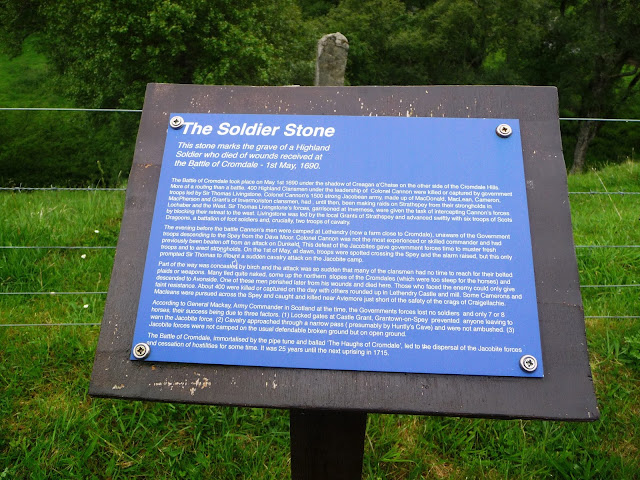 This skirmish took place during an early period of Jacobite unrest and it was fought on May 1st 1690 under the shadow of Creagan a’Chaise on the other side of the Cromdale Hills. More of a routing than a battle, 400 Highland Clansmen under the leadership of Colonel Cannon were killed or captured by government troops led by Sir Thomas Livingstone. Many of the clansmen fled eastwards over the hills only to collapse later from their wounds.

Our next stop was a very strange one. It was by a small church in the most lovely of spots ... 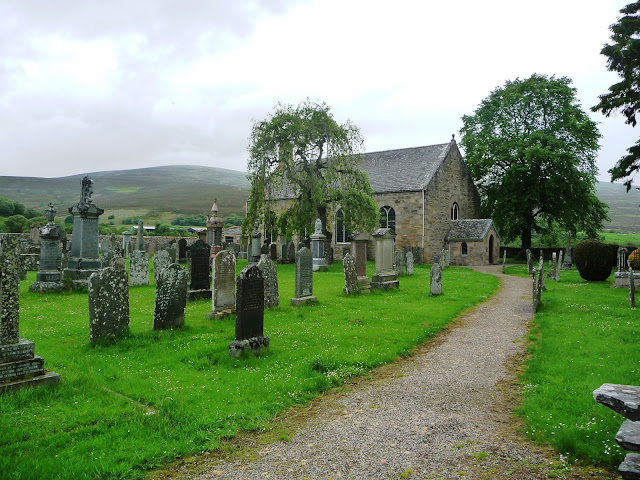 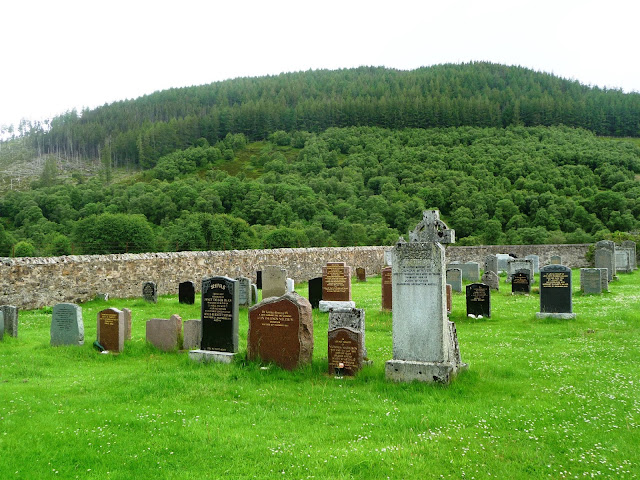 ... and, though I am sure this next picture may seem pretty gruesome to some, I was kind of morbidly fascinated ... 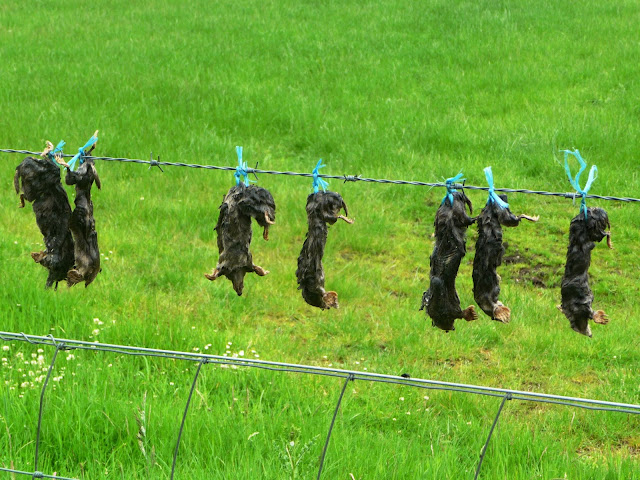 We could only assume that the mole catcher only got paid if he could prove he'd done his job.

There was nothing at all gruesome about our next stop, which was the Packhorse Bridge at Glenlivet, yes, that Glenlivet of Scottish whisky fame.

This beautiful bridge spans the Livet at Bridgend where the river tumbles through a narrow rocky gorge. The exact age of the bridge is unknown but it is thought to have been built in connection with the nearby Blairfindy castle. Two arches of the bridge now survive, the third having been ripped away by flood waters during the great "Muckle Spate" of 1829 which caused much devastation to Speyside.

This really was the loveliest of spots and was a real delight ... 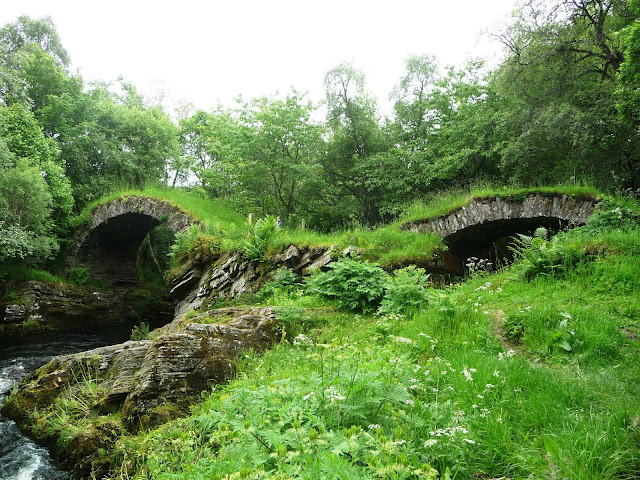 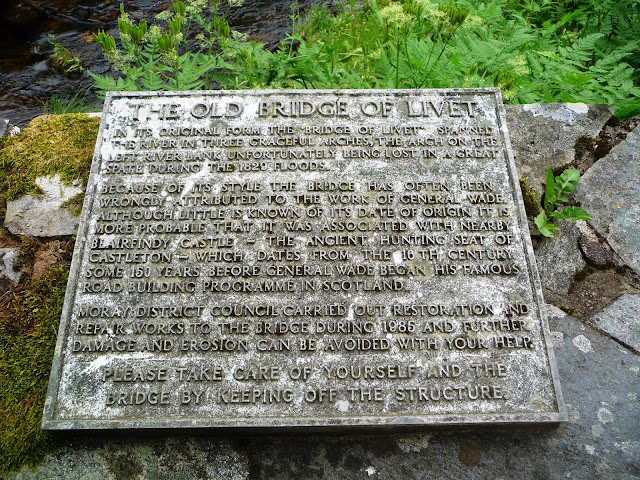 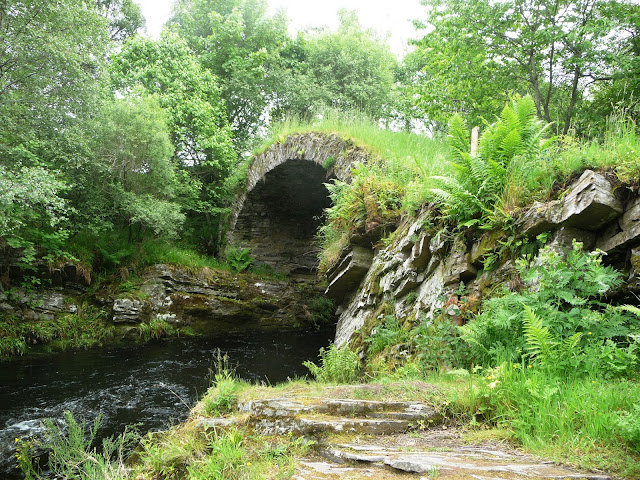 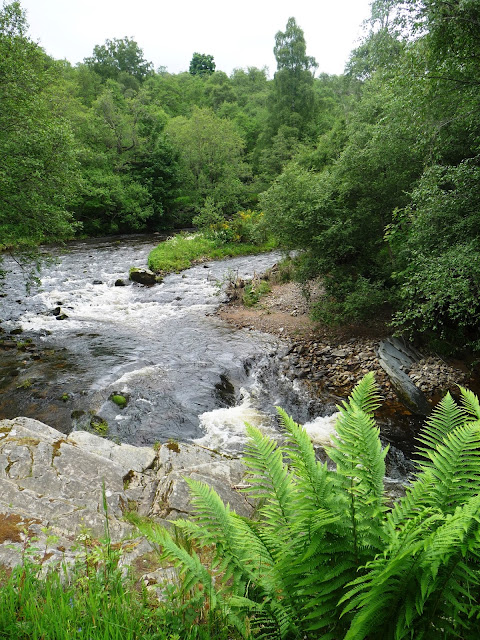 It was now time for us to begin our long trek home, which we did stopping every now and then to pick up another seven caches along the way.

We'd had another lovely day out exploring, finding interesting local treats, thanks to local cachers who put the effort in to place and maintain caches for others to find. A big thank you from the four of us 😀😀😀😀
Posted by Carol at 10:06

Email ThisBlogThis!Share to TwitterShare to FacebookShare to Pinterest
Labels: Beautiful Britain, Corndavon Cottage, Garnshiel Lodge, Geocaching, Life of Pottering, Out and About, Scotland, The Cairngorms