Yesterday I had a memory come up on Facebook of a post that I shared a year ago, all about our plans for the garden for last year. How spooky that I had this one ready for sharing today ... I guess it just goes to show how much a creature of habit I am 😀

So here we go with what we have on the cards for this year ...

Once the strawberry bed has been cleared one of the next early signs of spring over here is me starting to get that itchy feeling where I want to get outside and get cracking in the garden. 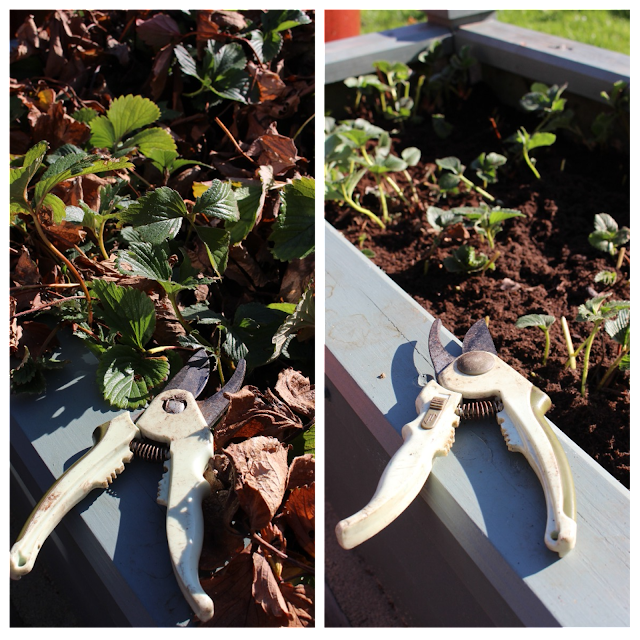 Gardeners World is back on TV and March's magazine came with a full pull out plan of Longmeadow ... 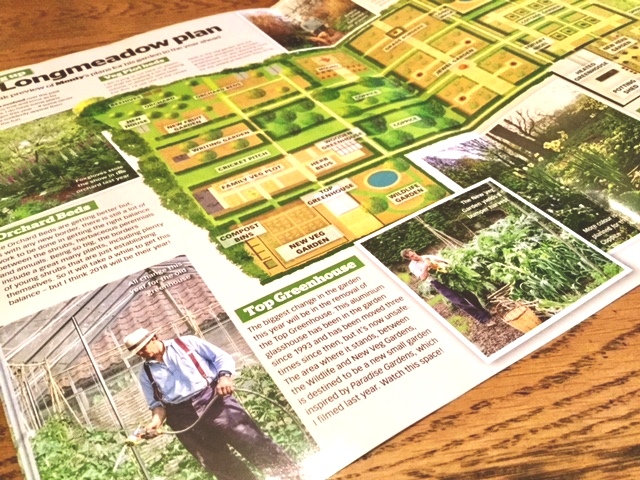 Seeing what Monty’s plans are for his beloved garden made me start thinking about what we want to achieve in our own green space over the course of this year.

We had a lot of work done on the house and garden last year and lived with 'muck' for the best part of the Spring and Summer.

We had repairs done to the external render of the house, which was a dirty, filthy job, but long overdue ... 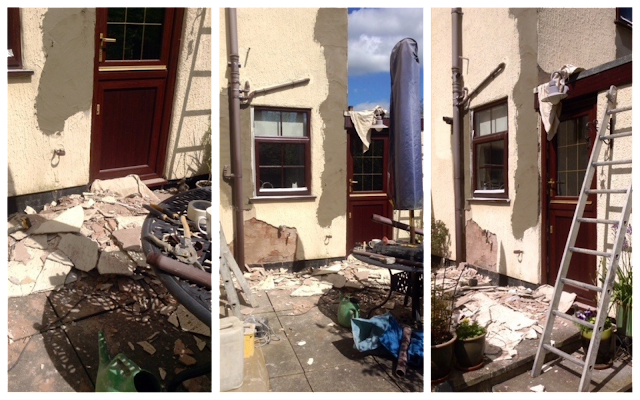 We also had a fair amount of hard landscaping work done and we are both really looking forward to being able to soften the edges and to just enjoy being out there this year, without the sound of the Stihl saw screaming and everything being covered in red brick dust. 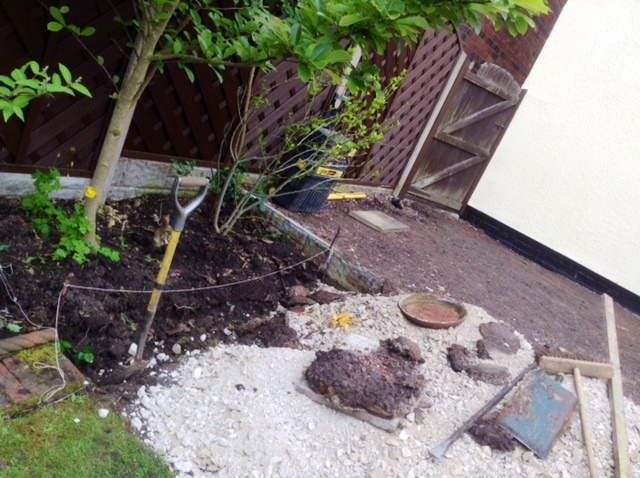 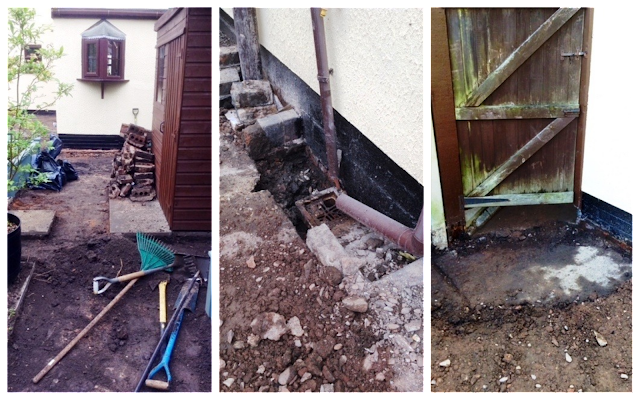 It was pretty gruesome out back for a while. Looking at these pictures has brought it all back 😩

Eventually, I would like to get round to sharing a before, during and after post, so you can see all of the changes that we've made.

So what do we have planned for this year?
There will definitely be lots of painting ... raised beds, sheds, the new pergola and the wooden bench all took a battering whilst the landscapers were in and are looking a bit worse for wear. they are all in need of a Spring freshen up.

One thing that will definitely be on the cards is to replace the rest of the boundary fence on the right hand side of the garden. We did the top half of the garden the year before last and it’s still looking really good. You can just about see new panels on this picture, we have also had a new gate since this picture was taken 😏 ... 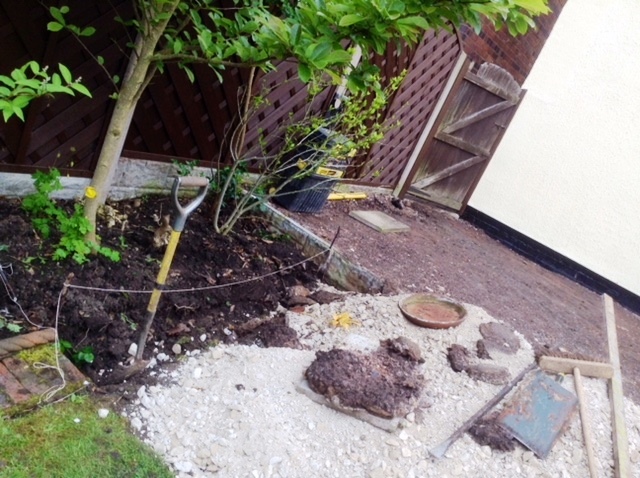 Whilst the rest of it currently looks something like this ... 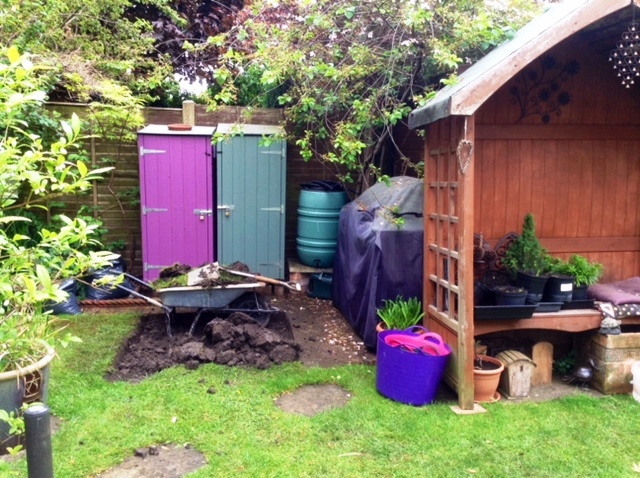 Then it will be onto the borders and planting .... 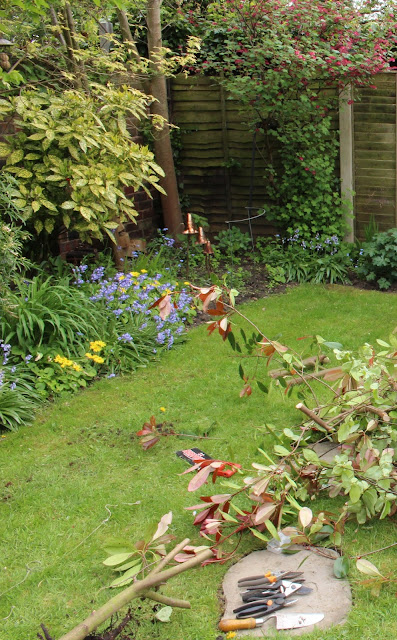 The back border is riddled with Spanish Bluebells, which look lovely in the Spring but spread like wildfire and once flowered look decidedly tatty. We want to try and take these out and level off the border, which has lots of peaks and troughs at the moment.

I think you can just about see some of this border on the left of this photo. I hasten to add that isn't how it looks at the moment. I found this photo digging back through the archives in April 2014.

I think we will end up pretty much having to remove everything, level it and then replant.

We also want to make the most of the new pergola area. The borders across the back and the side are no longer really visible from the rest of the garden and we only get to see them when we are actually in the pergola, which only happens on the nicest of days.

We have some lovely planting there which flowers in the Spring, which means it just no longer gets seen, so we need to do some shifting around. I want to plant these areas up with low maintenance stuff that looks reasonable all year round and isn’t wasted by being out of sight when at its best.

We also made a bit of a token effort with climbers at the end of last year, but I think we made bad decisions and really need to give it a bit more thought. Add to that perhaps some hanging baskets and pots of summer bedding and I hope we will have a lovely spot to catch the last rays of sunshine of the day. 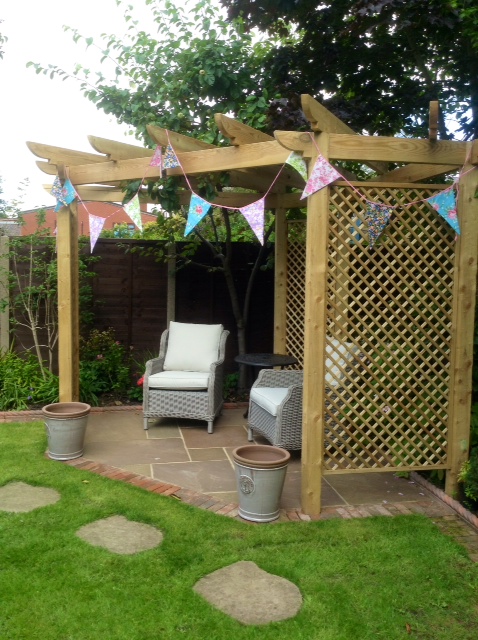 Then there is the old square raised vegetable bed. At the moment it is full of random plants that were shifted during the works last year when they needed a safe haven.

After our initial delight at the success of growing our all kinds of vegetables and salads in this bed, the last three or four years have yielded pretty much nothing at all. We’ve tried planting green manure, we’ve added compost, we’ve left it fallow and still nothing. Seeds just seem to disappear and seedlings just don't grow. 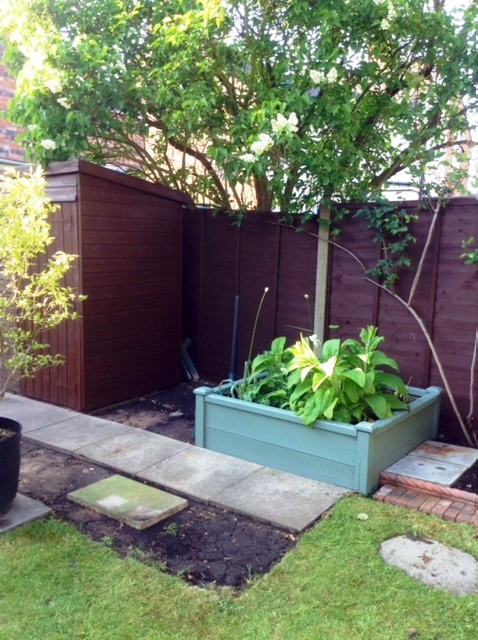 The plants that have over wintered there seem to love it though, so I think we have decided that we will turn it into a more structured flower bed for now. I’m thinking of a white themed bed, with something to add some height and planted to give all year round colour. Big plans!!!

It’s also time for us to decide what we want to do fruit and veg wise. We have a Morello cherry tree and a quince in the garden which fruit well, along with a blueberry which was prolific last year, and a strawberry bed which gives mixed results from year to year.

The other veg bed seems to have become home to some delphiniums, which we got off the local market for a £1 a plant, and the three irises we bought from Osborne House on the Isle of Wight last year. The delphiniums flowered three times last year, which was a real surprise, hopefully they will do the same this year. It will be interesting to see how the irises cope this much further North. 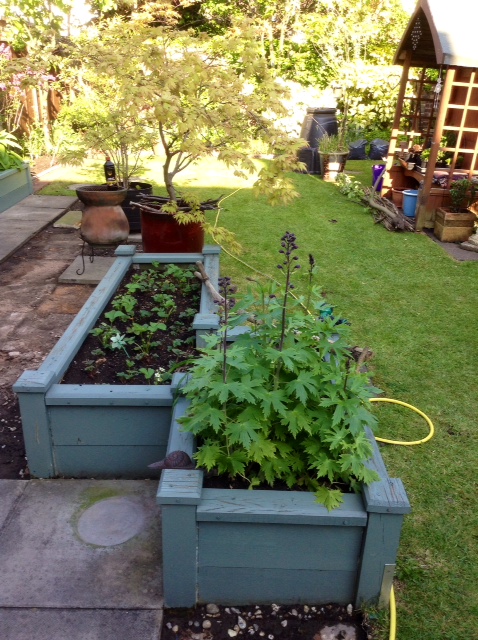 This leaves us with no real space for much by way of salad or veg, though pots are always an option ... but then there’s all that watering.

We would be sad, I think, not to grow French beans or tomatoes at least.

finally I want to go big on summer bedding ... in-pots and baskets. Hopefully watering won’t be too onerous and I won’t plant everything out just before we go on holiday!!

I have had a sneaky look in the seed box ... 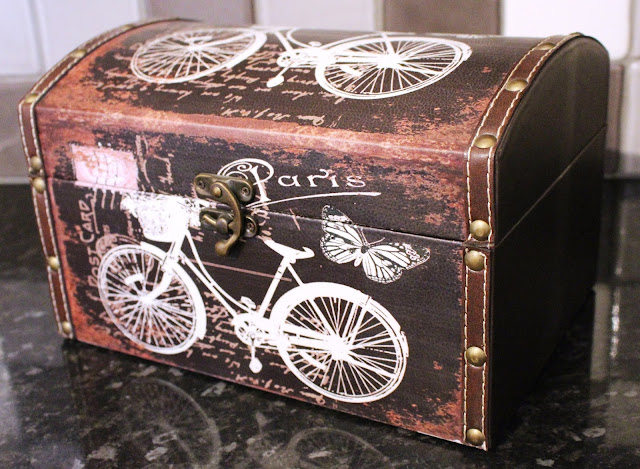 Whilst pickings were quite meagre there are a few salads and tomatoes and more flowers than I remembered .. and plenty of bean seeds that we collected from our crop the year before last, it would be a shame for them to go to waste. 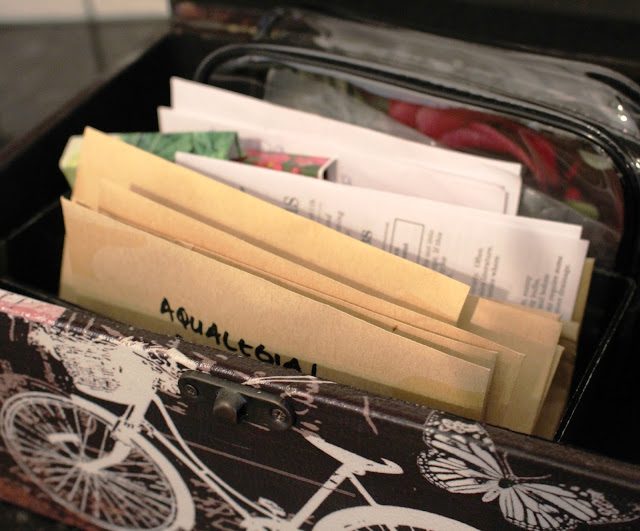 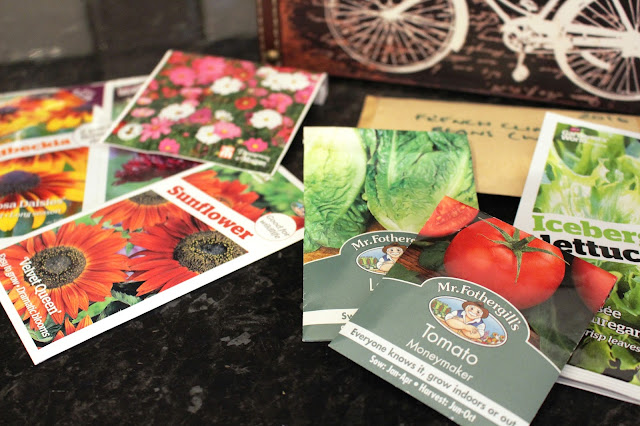 Oh, I also found these too. I know it’s really naughty ... but we did a bit of hunter gathering whilst we were out and about last year, so have quite a few different bits to have a go at. 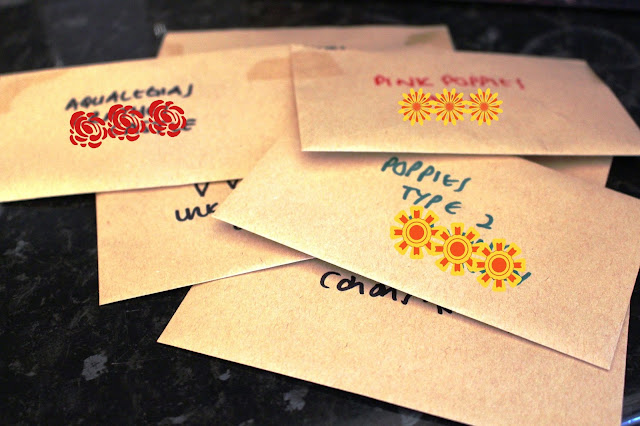 It’s definitely time to be buying some seed compost and seeing what comes up.

Once the weather warms up a bit I will take you on a wander round the garden so you can see how we are getting on. 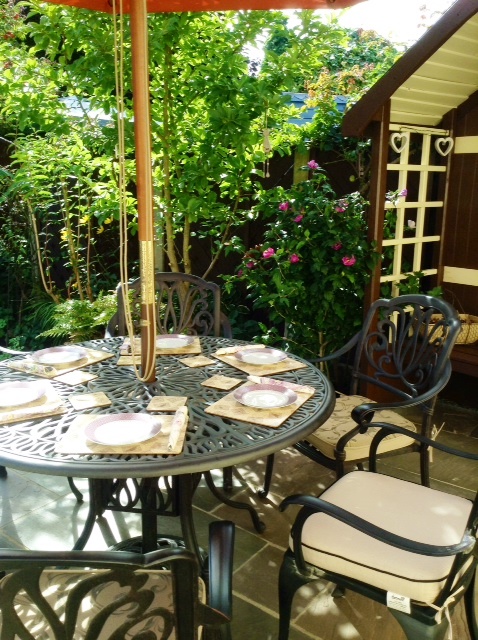 Email ThisBlogThis!Share to TwitterShare to FacebookShare to Pinterest
Labels: At Home, English Heritage, Garden Project, Goals & Objectives, In the Garden, Life of Pottering, Planning the Garden, The Garden at Number 27