In my last post about Will Sidney's WW1 it was 1 January 1919 and we left Will in Hospital, in France, waiting to come home. 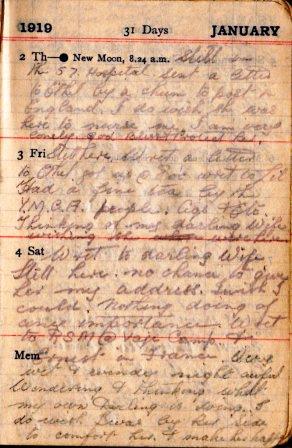 "2 Th - Still in the 57 Hospital. Sent a letter to Ethel by a chum to post in England. I do wish she was here to nurse me. I am very lonely. God bless & protect her."

"3 Fri - Still here. Writ a letter to Ethel. Got up @ 8 o'c. Writ to Lil. Had a fine tea by the YMCA people. Cigs etc. Thinking of my darling wife. Wishing she were here."

"4 Sat - Writ to darling wife. Still here. No chance to give her my address. I wish I could. Nothing doing of any importance. Writ to RSM @ Vaje Camp & Ernest in France. Very wet & windy night - awful. Wondering & thinking what my own darling is doing. I do wish I was by her side to comfort her & make her happy." 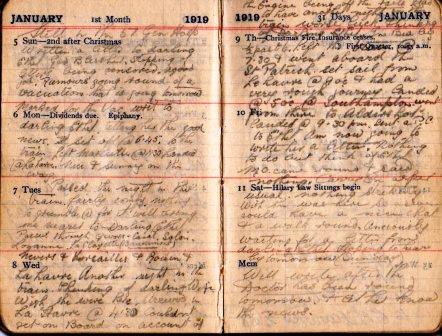 "5 Sun - Still in the 57 Gen Hosp. Written a letter to darling Ethel. God bless her. Stopping of letters being censored. A good job. Rumours going round of a vacuation that is going tomorrow. Marked for the vac. Writ to darling Ethel telling her the good news."

"7 Tues - Passed the night on the train. Fairly comfy. Nothing to grumble @ for it will bring me nearer to darling Ethel. Passed through Givors-Canal, Salon, Leyanne, La Clayette (Baudemont), Nevers, Verseille & Rouen & Le Havre."

It took a good few hours and lots of scouring maps of the French railway network to decipher Will's route. We are assuming that from Marseille his first stop must have been Salon (de Provence), though Will puts this as his second stop. Following the map takes us to Givors-Canal and then Lyon, which we think Will has referred to as "Leyanne". From there his description is quite straightforward.

"10 Fri - Nothing to do but think of Ethel. MO came round & said nothing. Carry on as per usual."

"11 - Sat - Nothing striking. Wish she was here so we could have a nice chat & a walk round. Anxiously waiting for a letter from darling Ethel. Hoping to hear by tomorrow (Sunday). Will write after the Doctor has been round tomorrow & let her know the news." 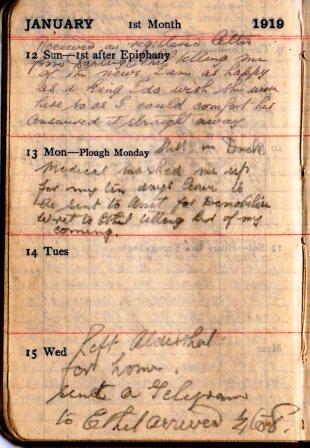 "12 Sun - Received a registered letter from darling Ethel telling me of the news. I do wish she were here so I could comfort her. Answered it straight away."

"13 Mon - Still in Dock. Medical marked me up for my 10 days leave to be sent to unit for demobilise. Writ to Ethel telling her of my coming."

Will's official war record shows him as having been admitted to the Connought Hospital in Aldershot on 9 January 1918 and discharged on 15 January 1918, which ties in exactly with his own diary entries. 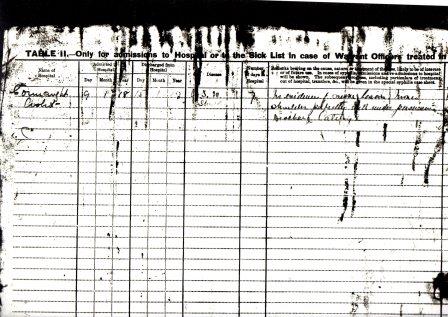 This is quite difficult to read but the name of the hospital clearly shows as being the Connought and the dates can also be read as 9.1.18 and 15.1.18. The 'Disease' column seems to read 'G.S.W.', which we believe indicates a gun shot wound. He was in for 7 days and his discharge notes are very hard to read but indicate that there is no evidence of lesion and that Will's shoulder moves perfectly well under persuasion.

It seems Will was issued with a ration book to cover the period of his 10 days leave and we have located this in his things. 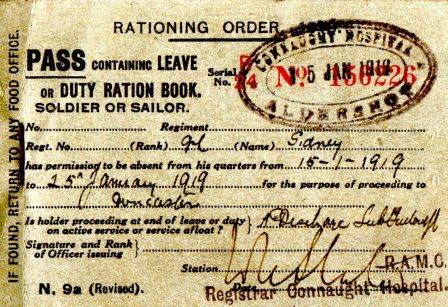 From the looks of it he didn't use many of the stamps, but it's fascinating to think that this was the actual ration book that he was issued with, just over 100 years ago.