Apologies folks for all the writing in today's Joy in the Everyday Ordinary ... do feel free to scroll past ...

One night last week it was late but I just couldn’t sleep ... which is pretty unusual for me. I was wide awake and my head was just buzzing with all kinds of everything. I decided to get up and try and capture a bit of a moment that I'd had earlier in the week. I sat in the dining room listening to the rain, as it was hitting the windows and sills and every now and again there was a bit of a metallic ting as it hit the old metal watering can out front.


Of late we seem to have got into a routine of not having a routine. Don't get me wrong, we are very fortunate and pretty much living the life of Riley, more or less doing whatever we want whenever we want. Every now and again though, things seem to descend into chaos and become a little overwhelming.

When I retired back in 2014 I found myself in a really good routine, where I was keeping on top of everything. I guess that was how I transitioned into this new stage in my life, rather than spending every day wondering what I was supposed to be doing. For a while I did a really good impression of the domestic goddess, laundry all done, house and garden tidy, tea on the table and plenty of time for relaxing too.

Slowly I added stuff to my new life ... this blog, crafting, days out keeping in touch with old work friends, lunches out with friends and family and plenty of gentle pottering about. 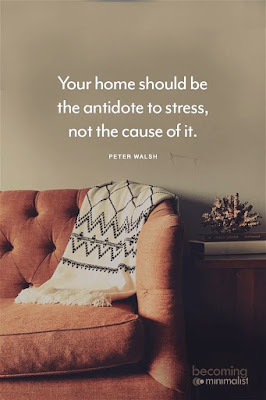 In 2016 Martin semi retired ... he tends to work two weeks a month ... and it all seems to have gone a bit to pot since then. When he’s not working he feels like he’s on holiday, so doesn’t really fancy doing routine day to day chores and because he’s off, I would rather be doing more interesting things too. My routine has gone right out of the window ... after all I don’t want to be attacking a pile of ironing whilst Martin is chilling out in the garden.

For both of us I think there’s also an element of feeling that ... hey, we’re retired, surely we shouldn’t be spending all of our time doing chores ... especially when the weather is good ... we want to be out visiting new places, relaxing in the garden, meeting up with friends and generally enjoying our time off. This is all very well and sounds perfectly acceptable but we seem to have fallen into a routine of doing none of the day to day stuff for about three weeks then getting really fed up with living in chaos and have a blitz ... this normally coincides with us being due to go on holiday.

The problem now is that we are not away again until September and all of a sudden, last week, it just became a little too chaotic and it was hard to know where to start, never mind build up the energy to have a really good crack at bringing life back under control.

I think I’ve realised that, if we want to fit in everything that we want to do and keep a nice home and garden, then we need to succumb to some form of routine and since having my wobble earlier this week I’ve set myself a couple of  new ‘rules’. I’ve decided to get up a bit earlier and I've set myself a bit of a morning routine, that needs to take place before I get sucked into any form of social media.

I’ve also revamped my bullet journal and started trying to plan time in for stuff that needs doing, limiting my daily goals to sensible levels ... meaning that everything gets done and possibly more besides.

So far it seems to be working. I’ve been amazed at how much I’ve achieved this week ... that extra bit of time gained from getting up that little bit earlier and that reduction of time spent scrolling through Facebook has made all the difference ... as has knowing what I want to get done each day, rather than procrastinating and ending up not getting on with anything.

I’ve done plenty of crafting, a bit of gardening, sorted all of the paperwork, written a few blog posts, kept on top of the daily stuff and cleared about three weeks worth of ironing. I’m not there yet ... the house still needs a good clean from top to bottom, but at least everything is away and everywhere is pretty tidy, which is certainly making me feel a lot better.

The plan now is for a bit of a blitz on the cleaning front over the course of the next couple of weeks and then trying to set ourselves a routine to make sure we keep on top of it, whilst still having plenty of time for all of the fun things that we want to do.

Hopefully it won’t be long before normal service is resumed and home feels like home again.

Don't get me wrong I know there are lots of people with far more things to worry about than whether the house is clean and in the great scheme of things my problems are insignificant ... I really do recognise that we both have lots to be grateful for.

In spite of my wobble there has still been plenty to smile about so here we go with our first 10 days of July ...
Posted by Carol at 09:40