Well I thought it was going to be another month with no reading whatsoever. Whilst there has been productive time spent gardening and even getting out a bit there has been far too much screen time ... it seems it’s not only a problem for the younger generation.

Last week I updated the operating system on my iPad and now I suddenly have access to lots of screen time data ... which is a bit worrying. I mean ... I knew I picked my iPad up often during the day ... but by the time you add up checking Facebook, email, Twitter, having a read of the news, catching up on blogs I like to read and the odd gaming session it doesn’t half add up.


And that’s not taking into account any extra time I spend on the 'big computer' doing our finances or blog writing ... which just doesn’t work on my iPad .... Yikes ... I need to get a life.

So it was 28 June and suddenly I just had the urge to have a read. I didn’t really fancy any of what was waiting to be read but opted for ... 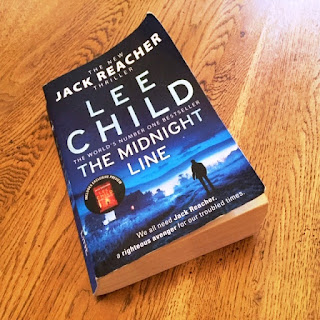 It was one of the Jack Reacher series and Martin had borrowed it from someone at work ages ago. He read it recently and once he had started he couldn’t put it down. Based in the fact Martin hardly ever reads anything at all I thought it was worth a go.

It’s not the first Jack Reacher book I’ve read but it’s the first in ages and it was a different Jack Reacher I found ... I obviously have missed a stack in the series as Jack is now a bit rudderless and seems to be moving around aimlessly ... not really coming from anywhere or going anywhere either ... just moving.

I have to say I was gripped ... I picked it up at tea time and took it to bed to try and read a few chapters ... well it was 3.30am before I could put it down and I finished it off the following morning ... it’s been a long time since a book has had that effect on me.

It was one of those stories which really started as nothing but very quickly drew you in to just having to know what happened next and it continues in that vein right until the very end.

It’s made me want to hunt out some more of Jack's adventures to try and find out how he’s ended up in the state he’s currently in.