Hi there everyone 😀
I've decided, in the absence of much else to blog about at the moment, to continue with my monthly 'Reading Corner' posts ... hopefully it will motivate me to keep reading ...
Bad Luck and Trouble
Lee Child 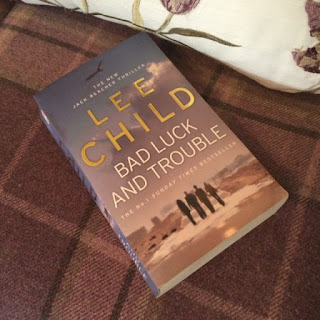 Well I started the year off as I ended it ... with the next in the Jack Reacher series.

I have to say though, that I did re-watch the Jack Reacher film on TV and whilst I already knew that I would struggle a bit with Tom Cruise in the role ... he is is just too short... I was surprised at how different the film was from the book One Shot, upon which it was based.

The title of this one definitely seemed to resonate with how Jack normally ended up and it sounded a bit different, with Jack being tasked to get the old team together to investigate a very dodgy looking death of one of their colleagues.

It was good to meet up with some of the old team ... some of whom had appeared in previous tales and some that were new. Whoever had decided to ‘mess with the special investigators’ clearly didn't know what they were taking on with Jack ... especially when supported by some of the best of his old team.

As the tale unfolded and more of the old team met similar sorry ends Jack became even more determined to get to the bottom of whatever they’d been working on and how they’d ended up back together. It was only a matter of time before the mystery was solved, the day was saved and the bad guys got what was coming to them .... though this time Jack certainly did cut it very fine indeed.

Nothing to lose
Lee Child 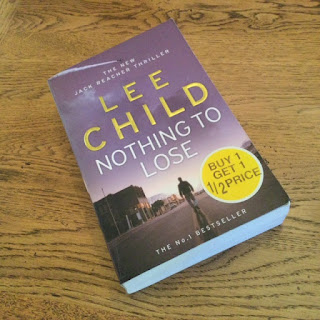 Another Jack Reacher ... the 12th in the series ... and another great read ... I was over halfway through and still had no real clue as to what was really going on in the aptly named town of Despair.
Having been kicked out for no real reason whatsoever Jack's curiosity knew no bounds and he was just not going to be happy until he found out exactly what was going on.