After my marathon of 6 reads in March, April was a bit less productive on the reading front, with just two books read ... both of the Jack Reacher persuasion ...
Make Me
Lee Child 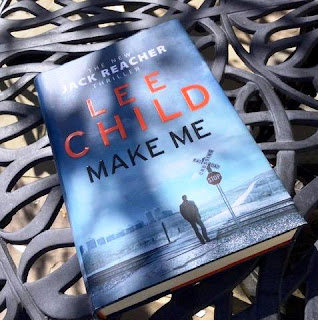 This one started off quite normally ... Jack on a train journey, getting off because he liked the sound of the name of the station ... bumping into a woman waiting for someone who didn’t arrive.
It was definitely a slow burn ... not that there was no action... of course there was plenty of that ... but in that it took a long old time to even have a clue as to what was going on ... and even then there was so much more to things than met the eye. It was only in the very final pages that all really did become clear.

Jack took another few knocks along the way and this time the ending didn’t see Jack and the girl going off in separate directions ... they actually drive off into the sunset together ... though how long they would stay that way remains to be seen.

Night school
Lee Child
For some reason I didn't take a photograh of Night School ... neither did I make any notes, but after a quick refresher I can say that I really enjoyed it ... here is the synopsis from Amazon ...

"It’s just a voice plucked from the air: ‘The American wants a hundred million dollars’.

For what? Who from? It’s 1996, and the Soviets are long gone. But now there’s a new enemy. In an apartment in Hamburg, a group of smartly-dressed young Saudis are planning something big.

In the morning they gave Reacher a medal, and in the afternoon they sent him back to school.

Jack Reacher is fresh off a secret mission. The Army pats him on the back and sends him to a school with only three students: Reacher, an FBI agent, and a CIA analyst. Their assignment? To find that American. And what he’s selling. And to whom. There is serious shit going on, signs of a world gone mad.

Night School takes Reacher back to his army days, but this time he’s not in uniform. With trusted sergeant Frances Neagley at his side, he must carry the fate of the world on his shoulders, in a wired, fiendishly clever new adventure that will make the cold sweat trickle down your spine."