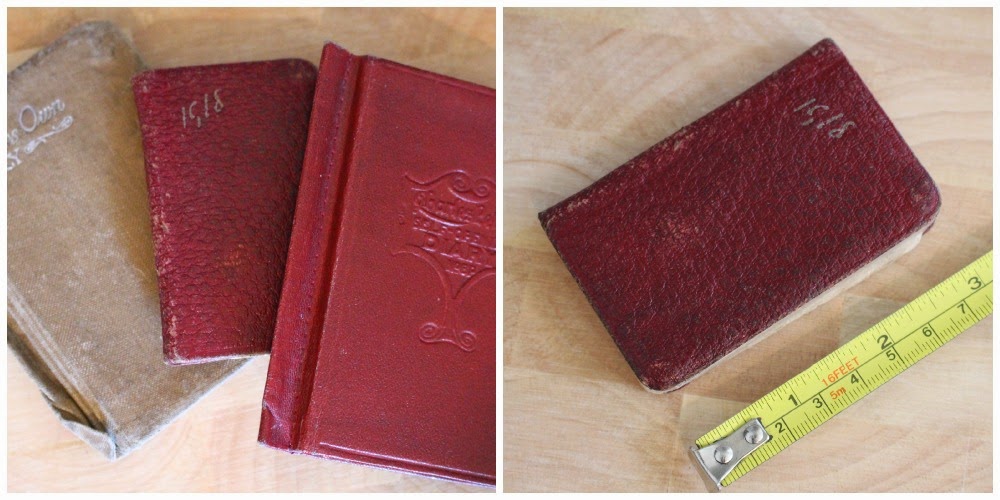 We found three of Will's personal war diaries in Peggy's belongings when she passed away in February this year. They cover the years from 1917-1919, though none of them are fully complete.  It seems that Will only made entries when he was actually on active service abroad, either in France or Italy.

Before I continue with the story of Will's war, I thought it might be interesting to just focus on the diaries themselves first as they are full of interesting information which would have been really useful to a soldier in the field during WW1. 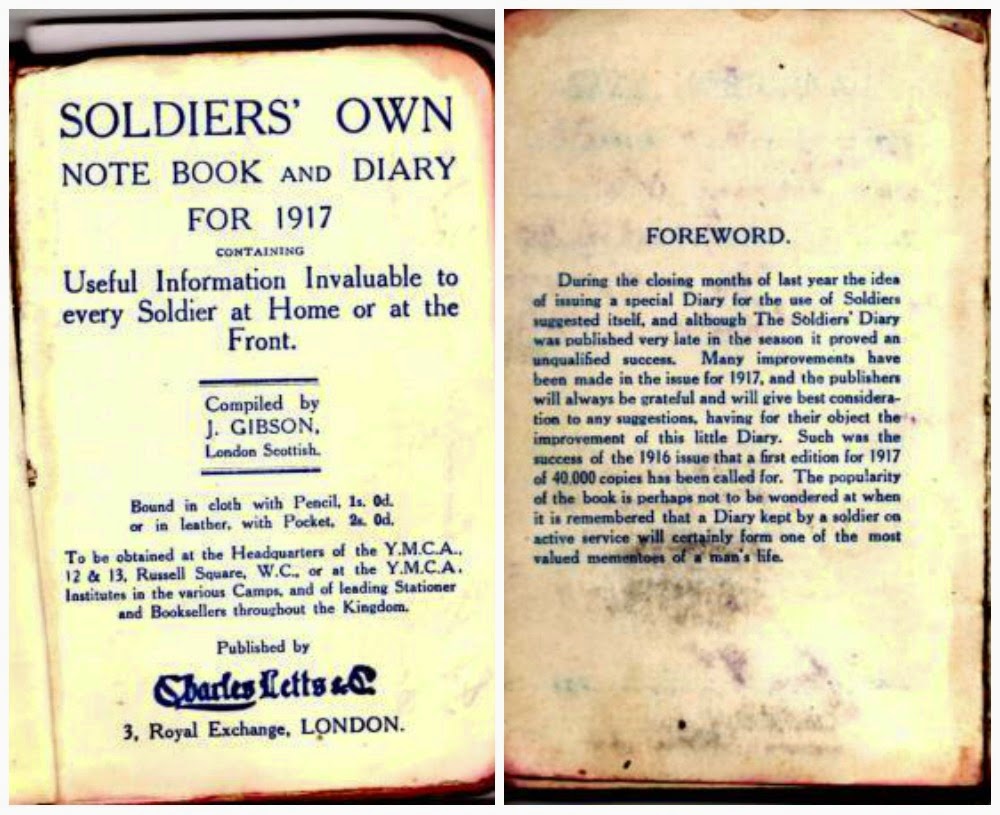 From reading the foreword of the 1917 diary, it seems that this was a new thing that had become very popular very quickly.

In case it it is hard to read the foreword from the photograph I have transcribed this below.


"During the closing months of last year the idea of issuing a special Diary for the use of Soldiers suggested itself and although The Soldiers' Diary was published very late in the season it proved an unqualified success.  Many improvements have been made in the issue for 1917, and the publishers will always be grateful and will give best consideration to any suggestions, having for their object the improvement of this little Diary.  Such was the success of the 1916 issue that a first edition for 1917 of 40,000 copies has been called for. The popularity of the book is perhaps not to be wondered at when it is remembered that a Diary kept by a soldier on active service will certainly form one of the most valued mementoes of a man's life". 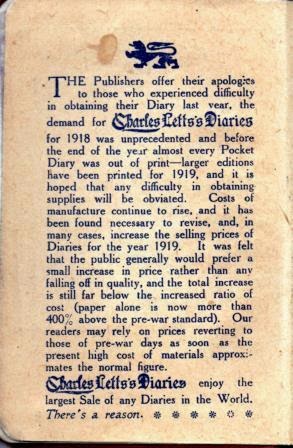 In 1918 the diary was a lot smaller and the note in the 1919 diary, the following year, shown here may explain why.


The inside front and back covers of the diary for 1917 contained maps of Europe.  The diary then began with 69 pages of useful information followed by five Memoranda pages before getting into the diary pages themselves.  The diary pages are a week to a view and all views include an illustration and another useful note, along with space for the soldier to record his daily activity.  At the back of the diary are Cash Account pages, space for Emergency Addresses, a Letter Register, a Memo of Things Lent and a few more Memoranda pages.

Within the 69 pages of useful information some of the more unexpected include how to set up a Field Kitchen, the Penetration Distance of a Rifle Bullet, First Aid for Poisoning and The Position of Main Arteries.

"The trench kitchen shown in our diagrams is the form of cooking place in most use and the measurements given will be found useful when you are in doubt. 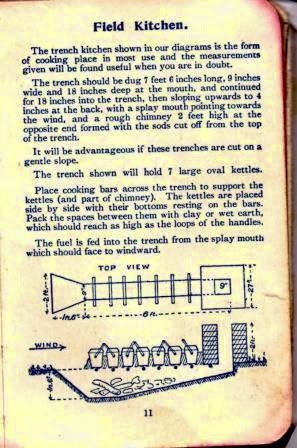 The trench should be dug 7 feet 6 inches long, 9 inches wide and 18 inches at the mouth, and continued for 18 inches into the trench, then sloping upwards to 4 inches at the back, with a splay mouth pointing towards the wind, and a rough chimney 2 feet high at the opposite end formed with the sods cut off from the top of the trench.

It will be advantageous if these trenches are cut on a gentle slope.

Place cooking bars across the trench to support the kettles (and part of the chimney). The kettles are placed side by side with their bottoms resting on the bars.  Pack the spaces between them with clay or wet earth, which should reach as high as the loops of the handles.

The fuel is fed into the trench from the splay mouth which should face windward". 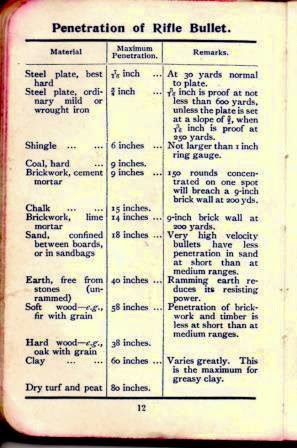 This page shows the penetration distance of a rifle bullet in different mediums.

This begins with steel plate being, 1 7/8 inch at 30 yards and ends with Dry turf and peat at 80 inches.

I really liked this poem that helps memorise how to deal with different instances of poisoning. 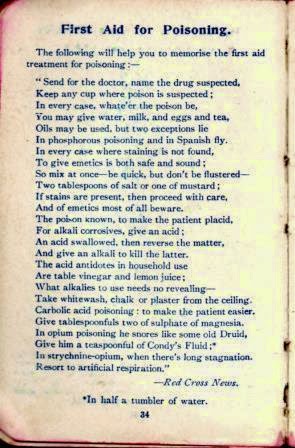 "Send for the doctor, name the drug suspected
Keep any cup where poison is suspected;
In every case, whate'er the poison be,
You may give water, milk, and eggs and tea,
Oils may be used, but two exceptions lie
In phosphorous poisoning and in Spanish fly.

In every case where staining is not found,
To give emetics is both safe and sound;
So mix at once - be quick, but don't be flustered -
Two tablespoons of salt or one of mustard;
If stains are present, then proceed with care,
And of emetics most of all beware.

The poison known, to make the patient placid,
For alkali corrosives, give an acid;
An acid swallowed, then reverse the matter,
And give an alkali to kill the latter.

The acid antidotes in household use
Are table vinegar and lemon juice;
What alkalies to use needs no revealing -
Take whitewash, chalk or plaster from the ceiling. 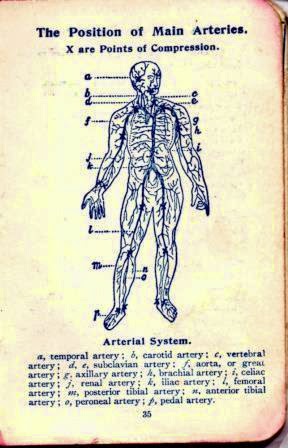 Carbolic acid poisoning: to make the patient easier,
Give tablespoonfuls two of sulphate and magnesia.

In opium poisoning he snores like some old Druid,
Give him a teaspoonful of Condy's Fluid:*
In strychnine-opium, when there's long stagnation,
Resort to artificial respiration".

* In half a tumbler of water.

This last illustration shows the Position of Main Arteries and Points of Compression.

There is also all the information within the diary that you would expect to see including Military Definitions, Distinguishing Flags & Lamps, Rifle Definitions, Useful Knots, Lists of Abbreviations for Military Terms, Illustrations of British, French & German Guns and Rifles, illustrations showing how to Find your Direction by both Day and Night, Bugle Calls, the Semaphore and Morse Code alphabets and a basic French to English Dictionary.

The 1918 diary, which is the smaller one, is not as comprehensive.  The 'improved' version in 1919 also contains a lot less information and is far more basic.

You will be able to see genuine extracts from all of Will's diaries in my later posts, when I continue the story of Will Sidney's War.
Posted by Carol at 09:47