Who was William Preston Sidney? 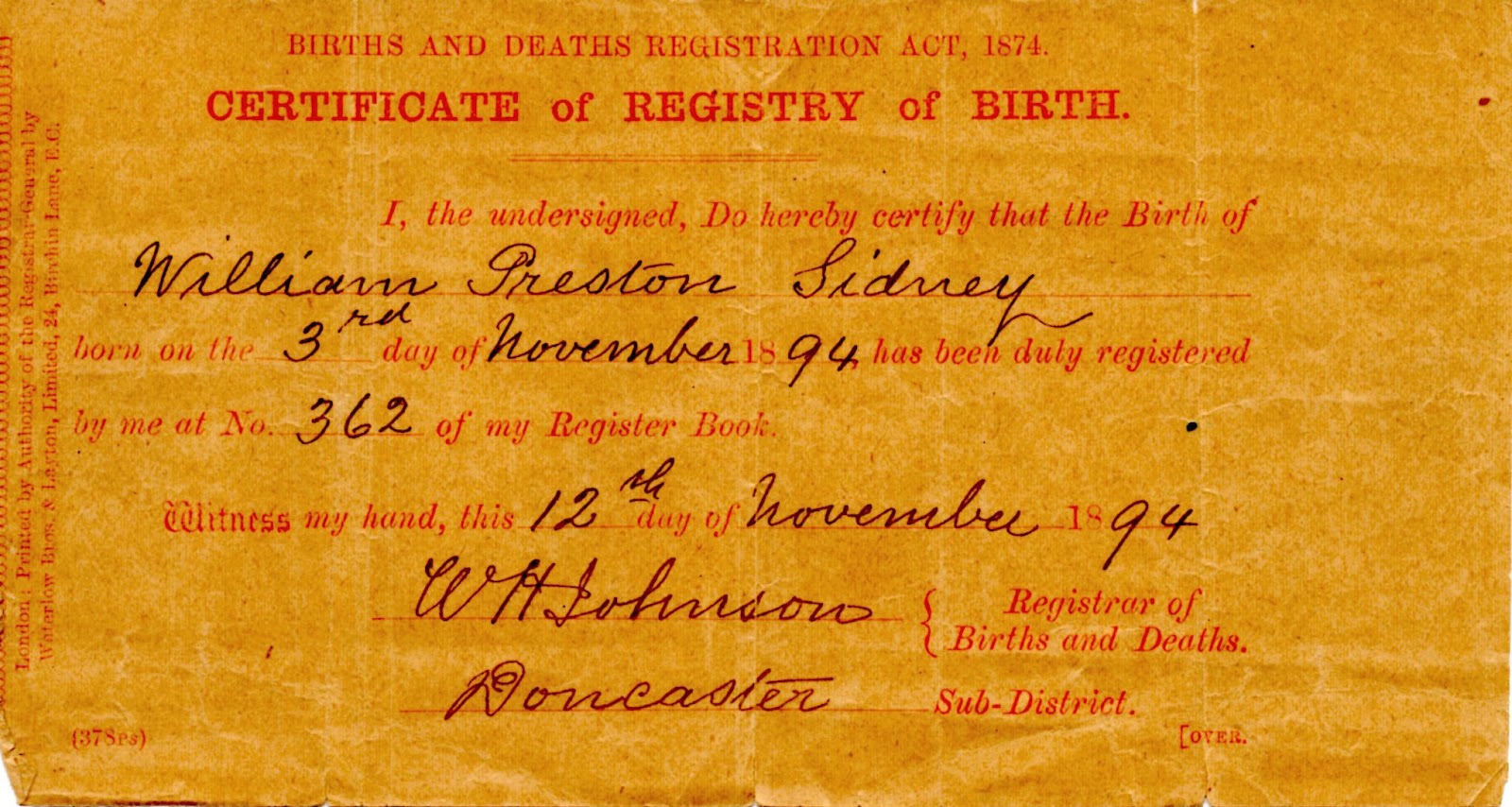 We knew that William Preston Sidney was born on 3 November 1894.  We know that his father was Thomas Sidney and his mother was Ada Sidney, affectionately known as Grannie Sidney.

We found the following newspaper article in Peggy's belongings.  It's about Tom and 'Grannie' Sidney, Martin's Great Grandparents, William Preston Sidney's parents.  It was published as a full page Local History spread in one of the Doncaster local papers on 19 August 1997.  I'm afraid I've had to cut it up to be able to scan it in, but really wanted to share it with you all (don't worry though, we have two copies!) 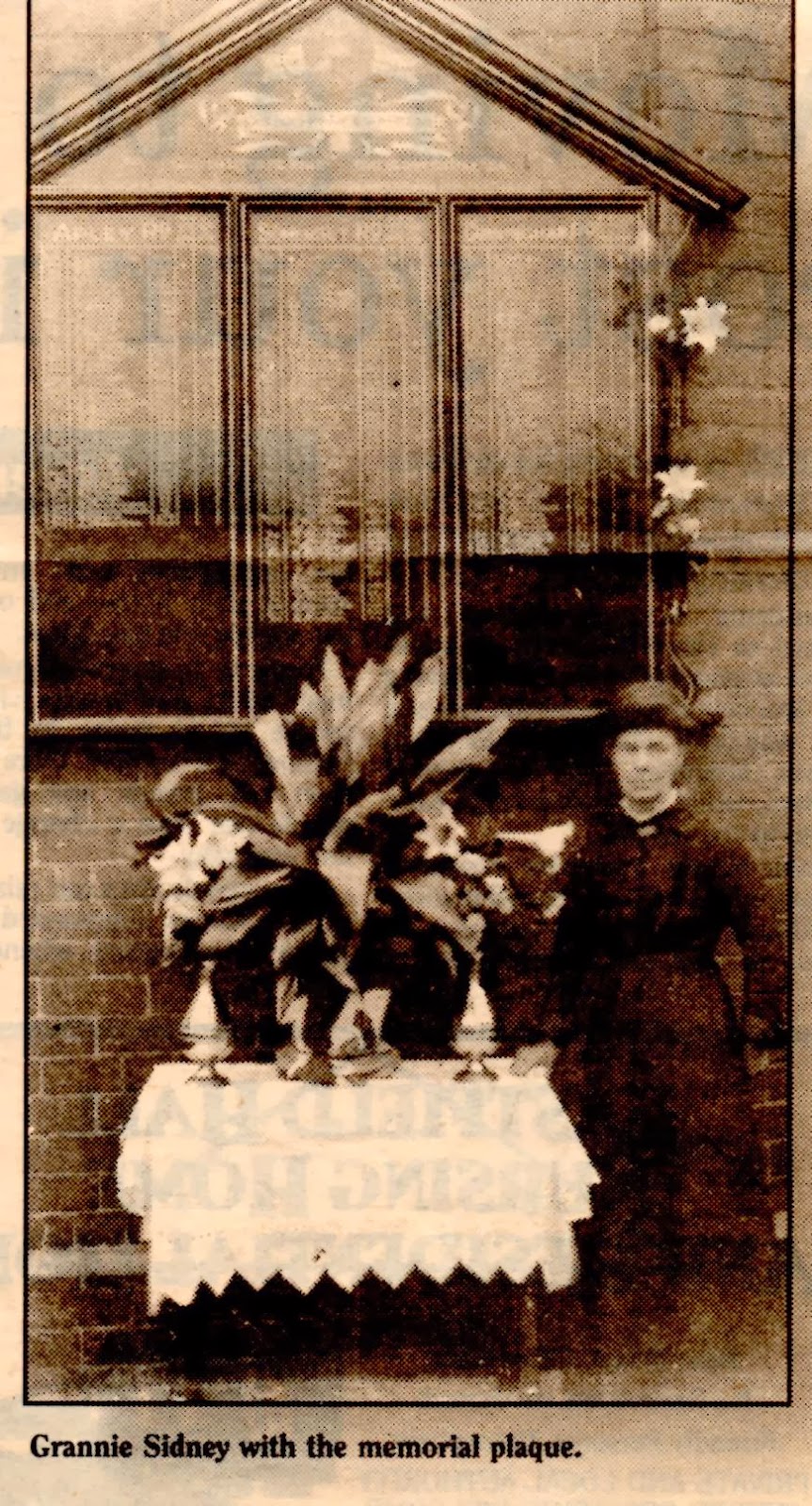 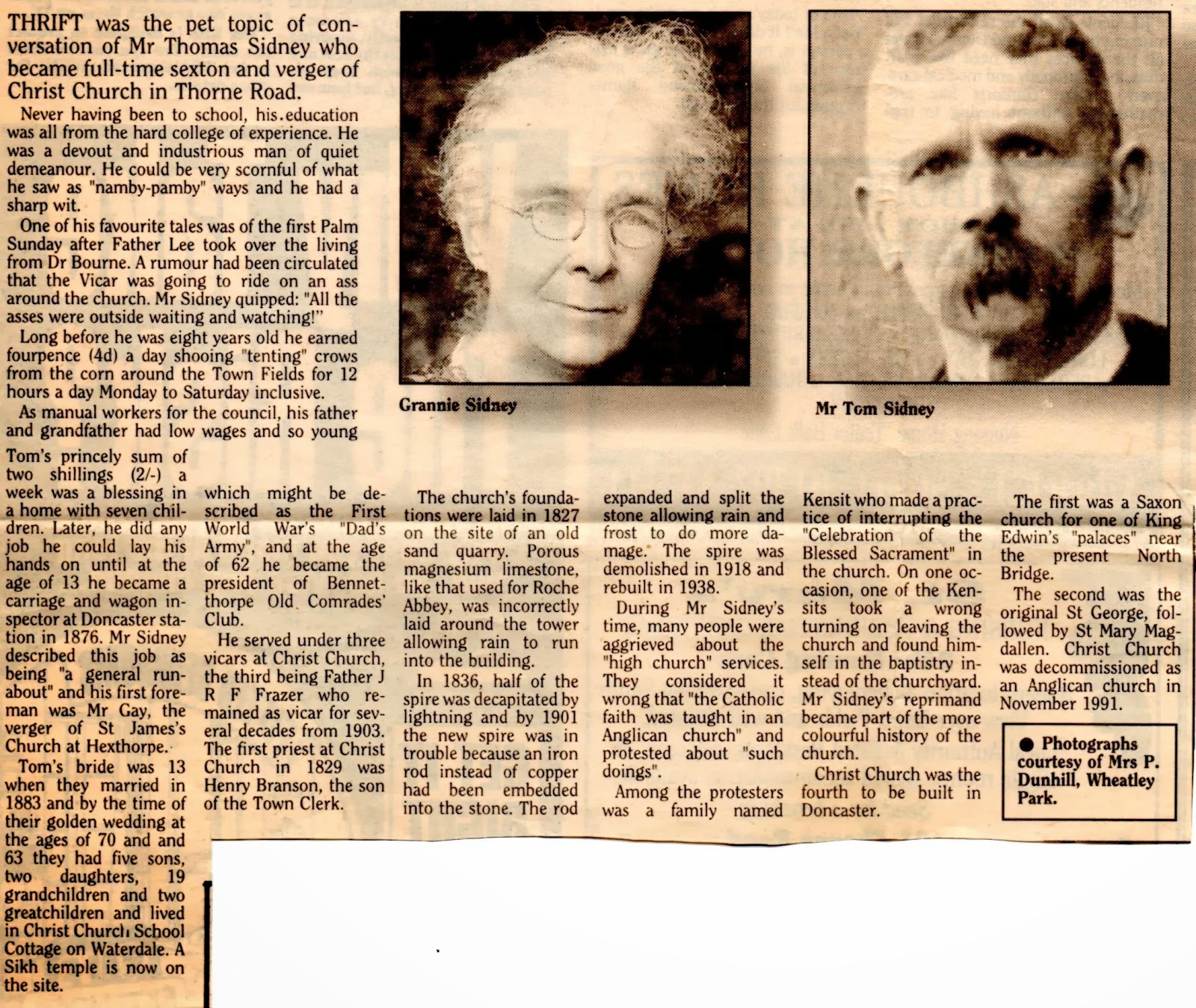 There were some really interesting snippets of information that we gained from this article.  Firstly it was really interesting to read that, at the age of 13, Tom became a carriage and wagon inspector at Doncaster station in 1876.  The railway was a big employer in Doncaster, and still is, it's where Martin's worked since he left school.

We were also really surprised to see how old Ada (Grannie Sidney) was when she got married in 1883.  She was only 13!  They had 5 sons, of which our Will was one, and 2 daughters.


The other really interesting piece of information that we got from this article was the part that talked about Tom Sidney's (William Preston Sidney's father) role as the Verger of Christ Church.  The article states that the Verger in 1886 was Tom's brother-in-law, a Mr W Preston.  He persuaded Tom to become his deputy and he eventually took over as Verger in 1911.

We wondered whether Mr W Preston could be our Will's namesake and this really took us on a heck of a journey.  Of course, there was always the possibility that the 'W' didn't even stand for William.

We hoped for the best and thought that, in our minds, there were 3 possibilities:
We then tried to find out what Ada 'Grannie' Sidney's maiden name had been.  Was it Preston?  No chance - it couldn't be that easy could it?  We did find out that her maiden name was Wilburn.  There was now only one option left, Ada must have had a sister and she must have married Mr W Preston.

Before we started to search for Ada's sisters, we decided to have a quick look to see if we could find a Mr W Preston, after all, we knew he was in Doncaster and we knew what year he was the verger at Christ Church.  We hit lucky and found a Mr William Preston, who married at Christ Church, in Doncaster on 23 September 1878.  Even better, he married a Minnie Hewitt Wilburn!

Eventually we managed to tie this Minnie Wilburn to our Ada Wilburn.  They were both showing as living at the same address in the 1871 census.

This may not sound like a massive event, but Martin and I were thrilled to bits.  We think we can safely assume that our Will, born in 1894, was named after his Uncle, who had inspired his father to take on the role of Verger at Christ Church.
We wanted to find out where Tom and Ada would have lived when they had Will in 1894.  The 1891 census shows them living at 134 Cleveland Street in Doncaster.  The 1901 census gave us a bit of a conundrum.  Tom was living with his mother-in-law, Martha Ruth Wilburn, at 20 Prospect Place, also in Doncaster.  Two of Tom's sons, Harold and Herbert are also showing as living here.  William Preston Sidney, on the other hand, we found registered in 1901 as a visitor of, what looks like, a Mr and Mrs Simmermite, in Hoyland Swain in Yorkshire.  We have no idea what relation these people were to the family.  His older brother Charlie is also showing here as a visitor.

This really confused us, why weren't they all living together?  Where was Ada and the rest of the children?

One of the things that Ancestry.co.uk shows you is whether or not other family trees are being researched that include the same family members that you are looking for.  We found another family tree that included William Preston Sidney and we thought we'd have a look.

We found our Will, Tom and Ada and the rest of the family.  From looking at Ada's record we could see that the other researcher had found her in the 1901 census records and this did give a bit of an explanation as to why the family were not all together.  In 1901 it appears that Ada Sidney, Will's mother, was registered as being in the Southport Convalescent Hospital.  So we would assume that the family were staying with friends or relatives whilst Ada recovered from whatever it was that ailed her.  Young Ada, Thomas (Junior) and Minnie Sidney were all showing as living with William and Minnie Preston, their Aunt and Uncle.


In 1911, when Will was 16, the family are back together again and showing as living at 45 Apley road in Doncaster.  At 16, Will's occupation was showing as being a Blacksmith's Apprentice.  We went to have a look at the house when we were in Doncaster earlier this month for Peggy's funeral.  It's currently a two bedroomed end of terrace house in a really old, traditional street.  It may have originally been a three bedroomed house, with no bathroom, but even so, it was a small property to house a family with 7 children!


Apologies for the quality of the photograph, but I took it on my phone and the sun was in the worst possible place.


We'll share more about Will's family with you as they appear in his story.