Will Sidney and the Queen's own Yorkshire Dragoons 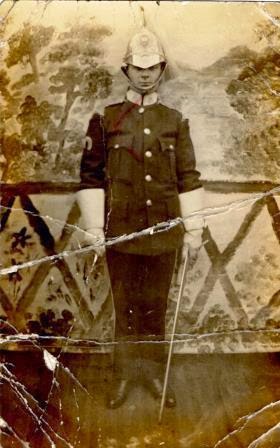 As you'll know from my last post Will was  mobilised at Doncaster on 4 August 1914 and embodied as a member of the Queen's own Yorkshire Dragoons, being required to attend at Doncaster, by 11.00am on 5 August 1914.

Before I tell you about Will's time in the Dragoons I want to share with you what I've been able to find out about the history of the Regiment, which was formed on the creation of the Territorial Force in April 1908.  It was headquartered in Doncaster, and under the command of the Yorkshire Mounted Brigade, with the squadrons being headquartered as shown below:

When initially set up, the Territorial Force was intended to be a home defence force for service during wartime and members could not be compelled to serve outside the country.  However, on the outbreak of war on 4 August 1914, many members volunteered for service abroad.  As a result, Territorial Force units, of which The Dragoons were one, were split, in August and September 1914, into 1st Line (liable for overseas service) and 2nd Line (home service for those unable or unwilling to serve overseas) units.  Later, a 3rd Line was formed to act as a reserve, providing trained replacements for the 1st and 2nd Line Regiments.


1/1st Yorkshire Dragoons
In June 1915 the Regiment was split up and then deployed to France in July, as Divisional Cavalry:

In May 1916 the Regiment reassembled at Hazebrouck and became II Corps Cavalry Regiment, with whom they remained until November 1917, when they were transferred to the Cavalry Corps. Up to this time their only chance of mounted action had been during the German retreat to the Hindenburg Line in April 1917. They were present at the battles of the Somme (1916), the Ancre, the Somme (1917) and Ypres (1917). Although in these battles there was no mounted fighting, they were often called upon to support infantry attacks with their Hotchkiss machine guns.

Whilst Will's personal diaries don't begin until 1917, we have found a page at the back of his 1917 diary that details his specific whereabouts for the early parts of the war, you can see the full detail on this a later post. For the later parts Will just lets us know whether he was in England or in France.

From looking at the dates and locations in Will's diary we have come to the conclusion that, at the beginning of the war, Will served with 'C' Company of the Queens own Yorkshire Dragoons and, as such, set out on his first of three visits to France on 19 July 1915 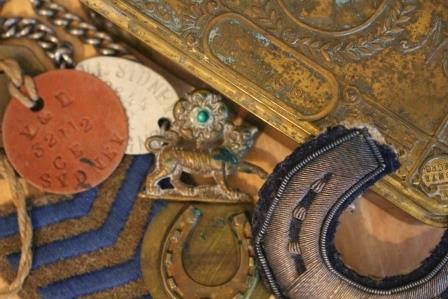 This picture shows some of Will's badges that he would have worn whilst serving with The Dragoons.

The horseshoe at the bottom right can be seen on his left arm as you look at the picture above, of Will in his uniform.

The brass badge in the middle is one of a matching pair of collar badges.

You can also see Will's original dog tags in the picture.  The silver one showing to the back is his Yorkshire Dragoons one, the orange coloured one is his York & Lancaster Regiment one.

From Will's official war records we can see that, in January 1917, he left The Dragoons and was transferred to the York & Lancaster Regiment.

In December 1917, after Will had transferred to the York & Lancaster Regiment, the Yorkshire Dragoons went on to be posted to the 8th (Lucknow) Cavalry Brigade, 4th Cavalry Division, where they relieved the King's Dragoon Guards and took part in the Battle of Cambrai 1917. As such they were one of only six Yeomanry Regiments posted to a Regular Cavalry Division.

The Yorkshire Dragoons were dismounted in February 1918, and returned to II Corps as Corps Cyclists.

From September to November 1918, the Regiment fought with the 9th Division in the offensive east of Ypres. In action on 15 and 20 October they captured over 100 prisoners with 7 field guns, 5 heavy guns, many machine guns and much transport.

After hostilities came to an end on 11 November 1918 the Dragoons were selected as the army of occupation and acted as advance guard to the 9th and 29th Divisions during the advance into Germany. The Regiment was stationed in the Cologne area until demobilization in July 1919, when Lord Scarborough received a letter of appreciation from the Corps Commander. "They have earned the gratitude of their country and county, in the way they have worked and fought all through the war, and have made a name for themselves which will never be forgotten".

My next post will tell you more about how Will spent his time from the outbreak of war on 4 August 1914, up until the end of his first trip to France with the Queen's own Yorkshire Dragoons.
Posted by Carol at 16:37