I can't believe it's time to do another of these Good Bye, Hello posts again already.  June has just flown by.

Whilst June was as busy as predicted, it didn't quite go to plan.  We had a bit of a curved ball at the beginning of the month and Martin ended up having to work in London over two whole weekends.  Typically, the weekends he was away were red hot, so we missed out on BBQ'ing and just relaxing and enjoying the garden.

It also meant that we've not really had chance to put the CX-5 through it's paces as yet.

We did manage one Saturday night in with good friends and good food.  We entertained Lesley and Tom.  Lesley is one of my oldest friends (by that, I mean I've known her a long time, not that she's ancient!)  We were at school together. 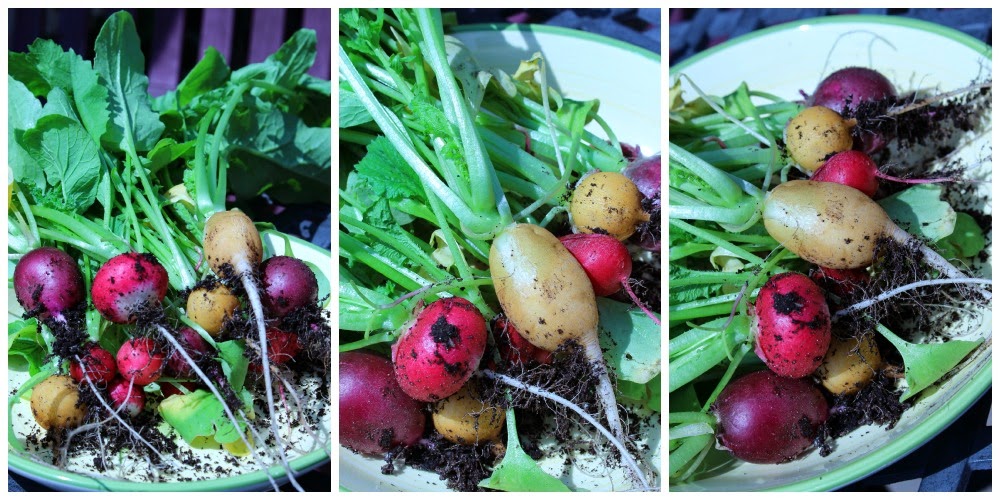 We had a lovely meal, starting off with the Butternut Squash & Red Onion Tarte Tatin, which has become a firm favourite.  We had it with home grown watercress and multi-coloured radishes.  We followed this with a main course of Gingered Beef with Bay, cheese & onion mash and veg, and finished off with a blackberry clafoutie and home made blackberry ice cream.  I'm still working my way through last Autumn's blackberry harvest.

I did manage to make good use of my time whilst Martin was away and I've made a start on decorating the guest bedroom.  I've painted out the airing cupboard and I managed to do the ceiling, twice, on the hottest day so far this year!!

I've also made a start on the worst job ever ...... clearing out the sheds.  I think that will be a long old job and, at the moment, I'm taking it very slowly.  It's not much fin without Martin, though I probably could get away with chucking out all sorts that I wouldn't be able to if he was here.

For one reason or another I've also ended up having to postpone my first big day out on the train and my photography day with Hannah, so I've still got those to look forward to.

The month ended with Martin and I at the School Summer Fayre.  I have now been officially voted in as the Chair of the Board of Governors and I completed my first 'official' activity at the Fayre, by judging the children's fancy dress competition.  Talk about pressure!

Martin and I manned the 'Tin Can Alley'.  I can't believe we thought it would be an easy afternoon.  We both spent the afternoon running around picking up balls, that kept disappearing in to the undergrowth, and building the cans back up.  We were shattered by the time we finished and went for a welcome meal afterwards with another set of good friends - Jo & Steve and their two girls, Hannah & Megan.

I have finally made my first foray into selling on e-Bay and listed my first 10 items.  You can't imagine how excited I was when I sold something.  It took me a while to work out what to do next, but I am definitely inspired to get more active on e-Bay.

July will start off with us on a week's holiday, though we are planning on spending it at Number 27, something we've never actually done before.  Hopefully we won't spend the whole week gardening, decorating or clearing out the sheds, and we will finally get chance to get out and about for a bit of caching and to see how the CX-5 likes the narrow country lanes.