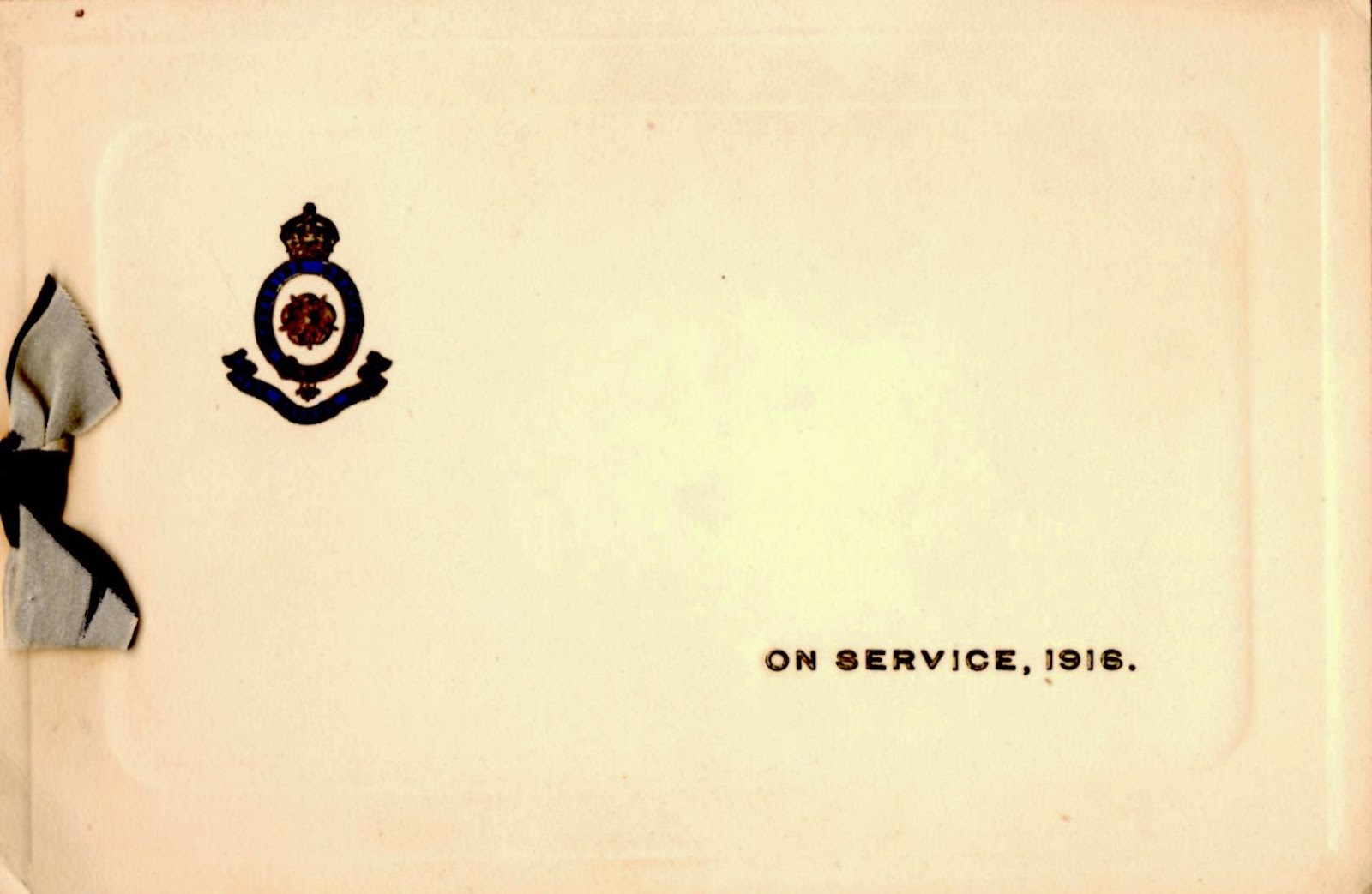 We know from his official war record that on 27 September 1917 Will was 'Posted SS', which we assume means he was posted as a Shoeing Smith.  His whereabouts detailed in the back of his 1917 diary confirms that he left again for France on 25 December 1916, Christmas Day.

On 14 January 1917, whilst in France, Will was transferred from 'C' Squadron of the Queens Own Yorkshire Dragoons to the 8th Battalion of the York & Lancaster Regiment.  It's at this point that Will's personal war diaries begin, by telling us on 13 January 1917 that he received a letter from home.

Whether or not Will received or sent letters seems to have been of utmost importance to him, being mentioned in his diaries on an almost daily basis.

Will's diaries also give us some of his really personal thoughts, especially of his feelings for his Darling Ethel, who is referred to with unfailing regularity.  It is clear from his diaries that his thoughts were constantly of her. We can imagine that during some of the really difficult times that Will faced, whilst at war, the thoughts of eventually getting home to be with Ethel were what kept him going.

In places Will's diary is confusing with pages having actually been bound in an incorrect order, whether this was done purposely we do not know.  On occasion Will has also re-dated pages.  We have done our best to ensure that our recount of his story is in the correct order. 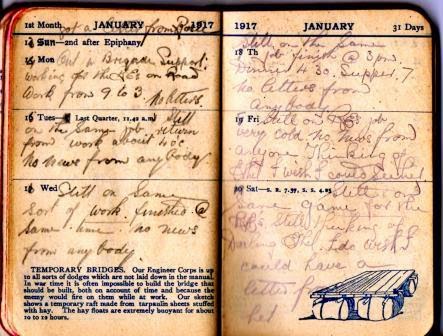 As the diary is difficult to read I will transcribe the most interesting parts as we go along.

14 Mon - Out in Brigade Support working for the REs on road work from 9 to 3.  No letters.

19 Sat - Still on same game for the REs.  Still thinking of Darling Ethel.  I do wish I could have a letter from her.

This week it appears that Will was working in support of the Royal Engineers on road work.  You can see that he mentions whether or not he has received letters every single day.  You can also start to see how his thoughts are constantly of Ethel. 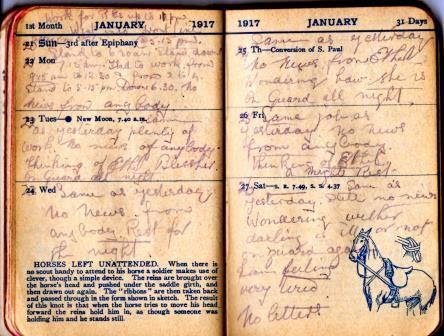 22 Tues - Same as yesterday plenty of work.  No news of anybody.  Thinking of Ethel. Bless her.  On guard all night.

23 Wed - Same as yesterday.  No news from anybody.  Rest for the night.

24 Th - Same as yesterday.  No news from Ethel.  Wondering how she is.  On guard all night.

25 Fri - Same job as yesterday.  No news from anybody.  Thinking of Ethel.  A nights rest.

26 Sat - Same as yesterday.  Still no news.  Wondering whether darling is ill or not. On guard again.  I am feeling very tired.  No letters.

This week we hear Will mention being on the front line for the first time, though all seems quiet. He seems quite tired and concerned at the lack of news from home. 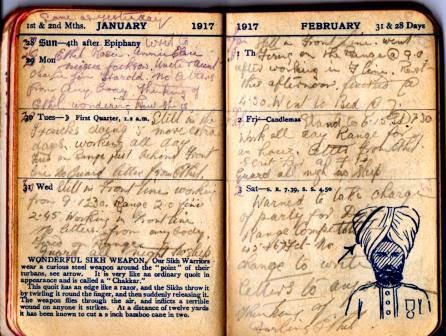 28 Mon - Writ to Ethel, Rosie, Annie, Elsie, Missus Jackson, Uncle & Aunt, Charlie, Jim, Harold.  No letters from anybody.  Thinking of Ethel.  Wondering how she is.

2 Sat - Warned to take charge of party for Div Range Competition 45 & 67 ....  No chance to write letters to anybody.  Thinking of Darling Ethel.

Unfortunately there are a few instances where I have been unable to interpret what Will is saying. Where this is the case I have just included ..... in my transcript.

You will also be seeing the individual information and illustrations that are showing on each page of the diary. This week shows an illustration of a Sikh Warrior wearing a turban, which conceals a curious steel weapon. 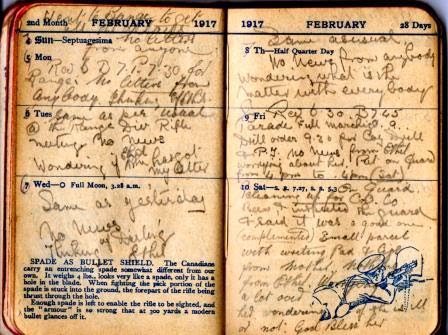 5 Tues - Same as per usual @ the range Div Rifle meeting.  No news.  Wondering if Ethel has got my letter.

6 Wed - Same as yesterday.  No news.  Thinking of Darling Ethel.

7 Th - Same as usual.  No news from anybody.  Wondering what is the matter with everybody.

9 Sat - On guard.  Cleaning up for CO.  CO been and inspected the guard & said it was a good one (complimented).  Small parcel with writing pad & cigs from Mother. Nothing from Ethel.  Wondering if she is ill or not.  God bless her.

The abbreviations that Will uses in his entries this week appear constantly throughout his diaries: 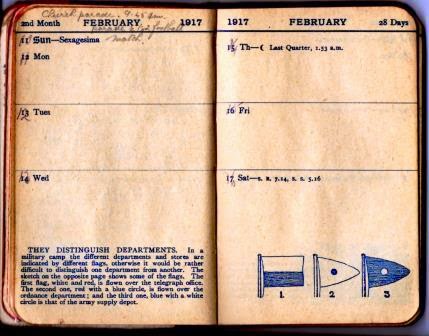 This is where Will's diary entries end for a while.  His official war record shows that on 10 February he "Joined 8th Batt in Field"  and on 13 February he was "Admitted Lyo Pyrexia".

11 February 1917 was Ethel's 20th birthday and we have the birthday card that Will sent to her, presumably before he was taken ill.  It includes a small book of poems.  You can see the card and the book of poems here.

Will's whereabouts list shows he "Left for Blighty" on 5 March 1917, presumably earlier than intended.  I will tell you more about what happened to Will upon his return to Blighty in my next post.
Posted by Carol at 22:12