Early May always sees us going away for our Wedding Anniversary.  This year was our 5th Anniversary and we spent it on our second cottage holiday of the year.  We stayed in Buzzards View, a fairly remote cottage near Eglwysbach in North Wales, not far from Llandudno, Conwy and the Snowdonia National Park.

Day 1 - Friday
As Martin was at work Friday morning, we didn't get to set off until early afternoon and decided not to take the route suggested by the sat nav.  This wanted to take us up the M6 and then cut across west to the A55.  We decided to take the A5 to Betws-y-Coed and then head North on the A470. I'm glad we did.  It has been such a long time since we have done a long journey that has not been on a motorway.  It was so much more interesting, loads to look at along the way and we missed any Bank Holiday weekend, Friday afternoon, M6 traffic chaos, so we arrived nice and relaxed.

We unpacked the car, met the owner, who sorted us out with some nice big fluffy bath sheets that met our exacting requirements, settled in and put the chilli on that I had made earlier in the week to bring away with us.  The joys of not having to work!  It just makes such a difference.

When I was working I would probably get back home on Thursday night, having been away from home for a couple of nights, having done no holiday prep, all of which would have to be done on the Friday morning.  By the time we set out I would be stressed out and shouting at Martin for nothing in particular, the poor love.  This time, I'd done most of the packing, made a chilli to take for Friday night tea and done most of the housework in advance - you need to leave it nice to come back to.  Come on, admit it, I bet you all do it.

Day 2 - Saturday
Saturday was a very lazy start.  By the time we were up, showered, breakfasted and ready to head out it was gone 12.00pm.  We decided we would head for Llandudno for the afternoon, followed by a holiday grocery shop at Tesco on the way back.

Llandudno was a great call.  It's a really nice Victorian seaside town anyway, but today, and for the rest of the Bank Holiday weekend, the town was taken over by the annual Victorian Extravaganza.

We managed to park up on the front and decided to head to the pier to start us off.  However, on the way we saw that loads of people were gathering along the roadside so we thought there must be something happening that would be worth watching.  We weren't wrong and spent the next hour watching a procession which included lots of people dressed in Victorian costume, marching bands and lots of steam engines.  As you can imagine we managed to find a front row spot to watch
from so we could take loads of photos.

The procession over, we headed to the pier, which was jam packed with people.  The whole town was really busy.  Normally we would prefer it to be really quiet, but today, with the procession and people all over the place dressed in costume it just added to the atmosphere.  We stopped for a drink and a snack at the café on the end of the pier and emerged just in time to catch a fly past by a WW2 Super Marine Spitfire. 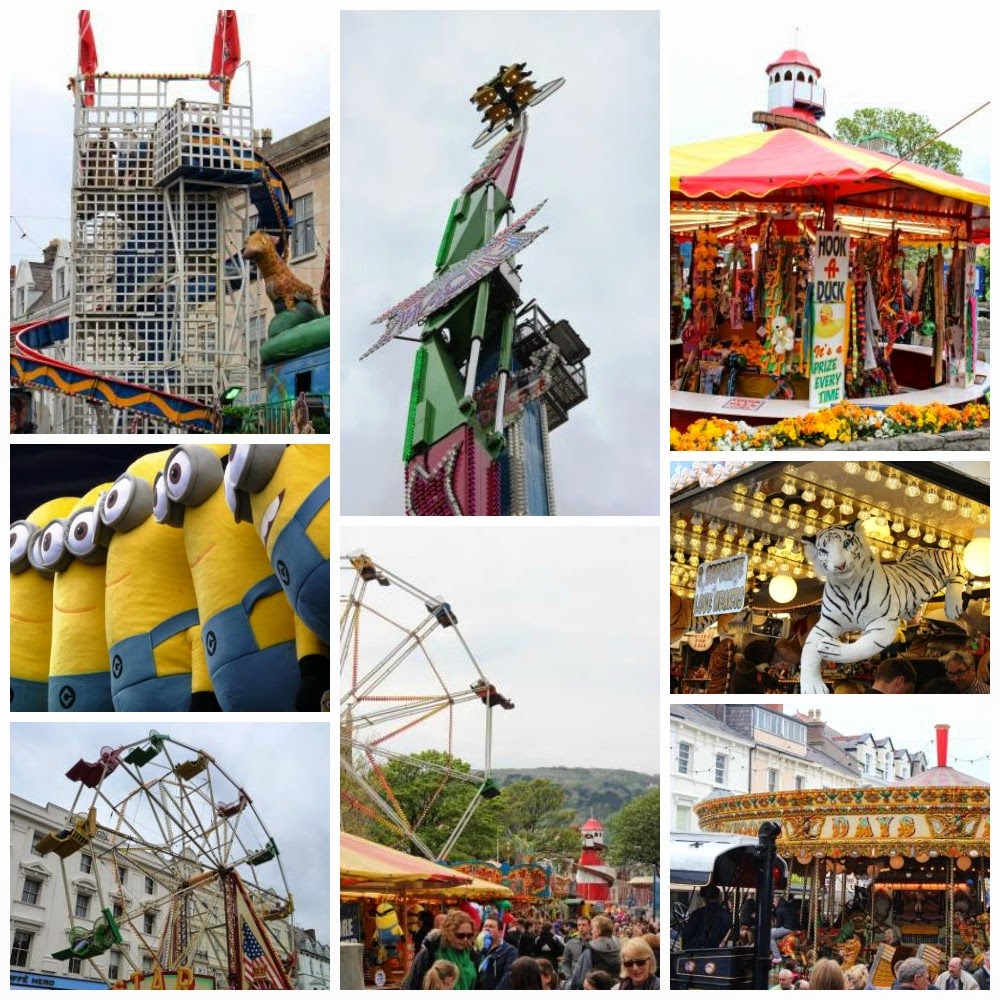 We then wondered back into town, which had been completely taken over by a funfair consisting of all manner of rides, some of which looked pretty hairy.  The steam engines had all parked up too so we had chance to have a really good look round.

We finally headed back to the car and off to Tesco where we stopped off to stock up for the rest of the week, before heading back to Buzzards View for a picky tea, our fave, a log fire and a good film, if we could stay awake long enough to watch it. 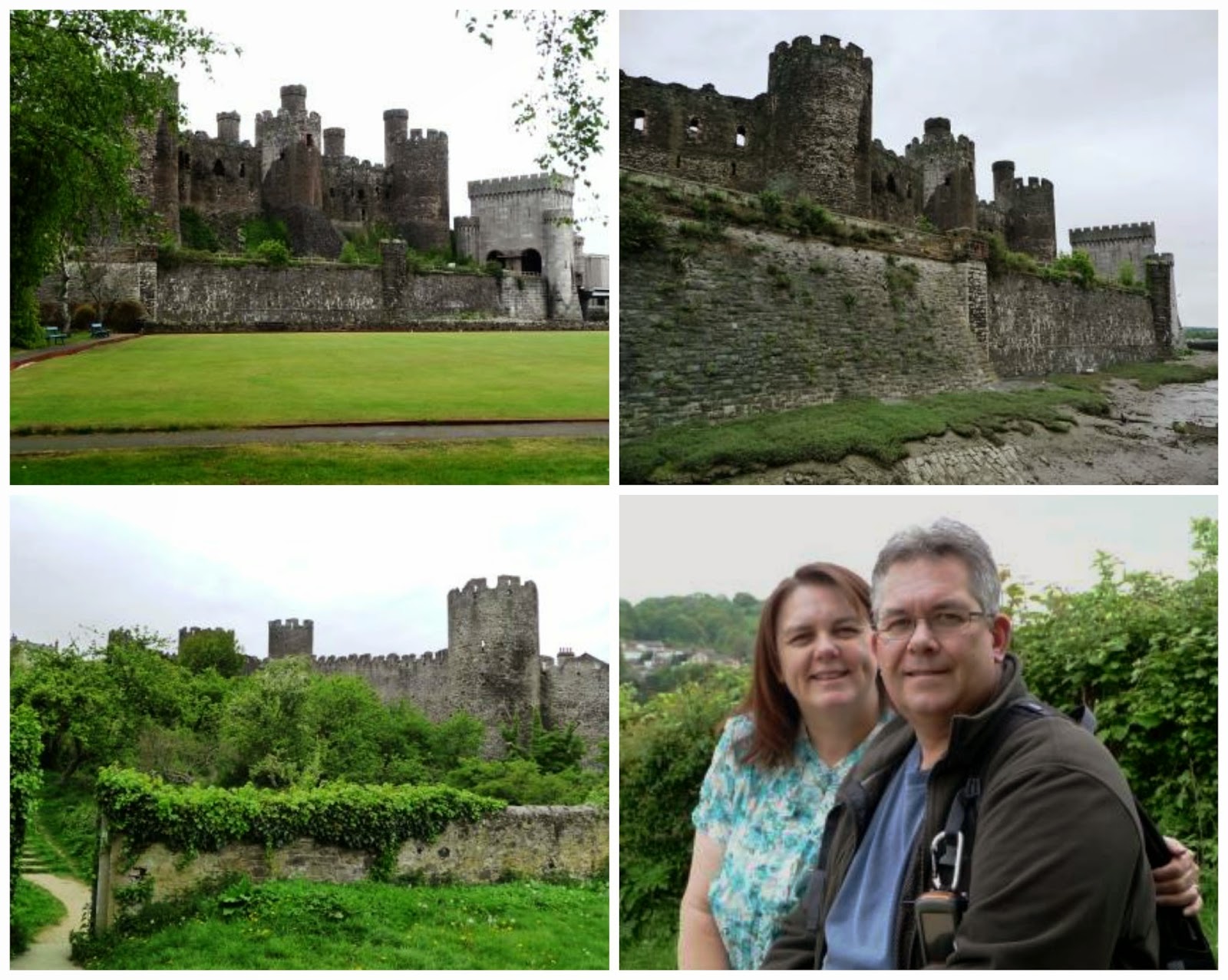 Day 3 - Sunday
We managed to get up and out before mid day, big achievement!  We decided to head into Conwy today. We had a day of sightseeing and a few caches on the agenda. 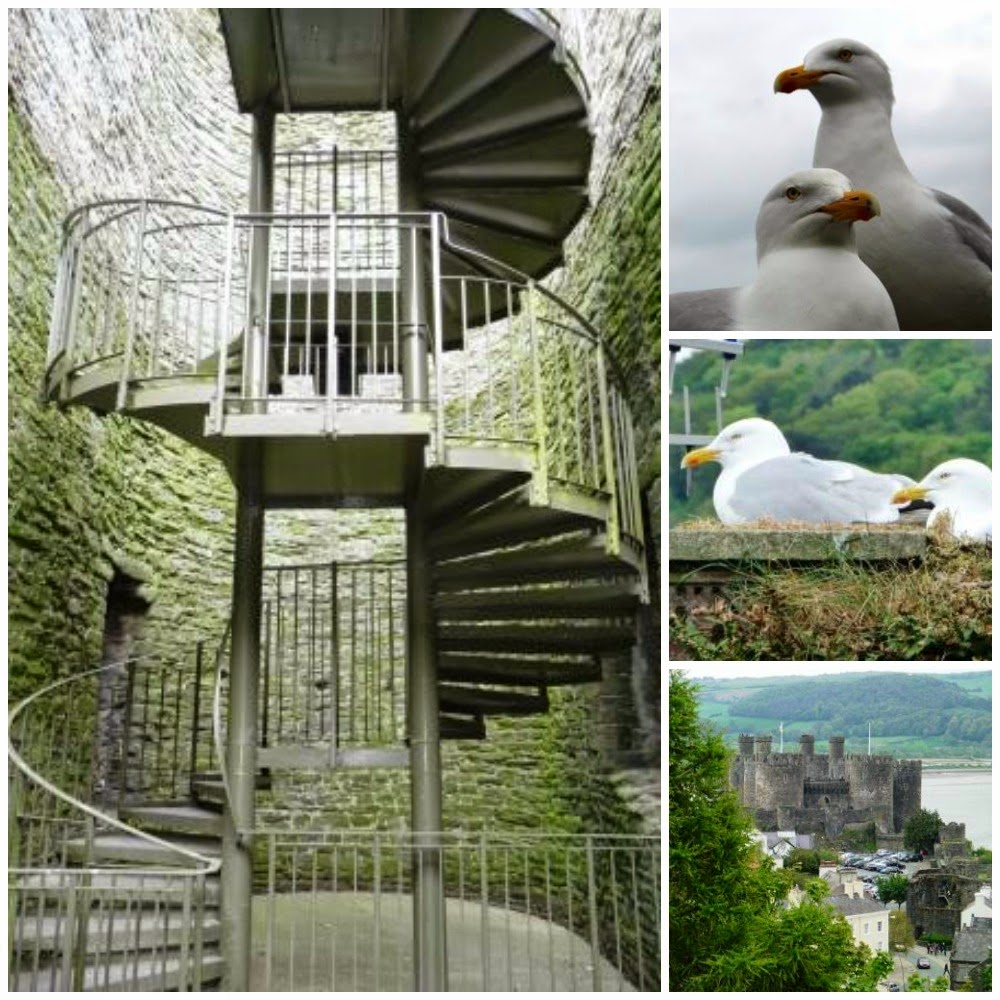 We started off with a really nice walk round the town walls, which was a lovely way to see great views of the castle, the town and the quay, as it's so high up.


We ended up on the quay, by the smallest house in Wales.  We followed our walk with a bag of chips, and excellent chips they were too, sitting watching the world go by, before having a wonder round the town, taking in a visit to Aberconwy House, the oldest house in Wales, which is owned by the National Trust.  It is only a small property but worth a visit if you are passing. 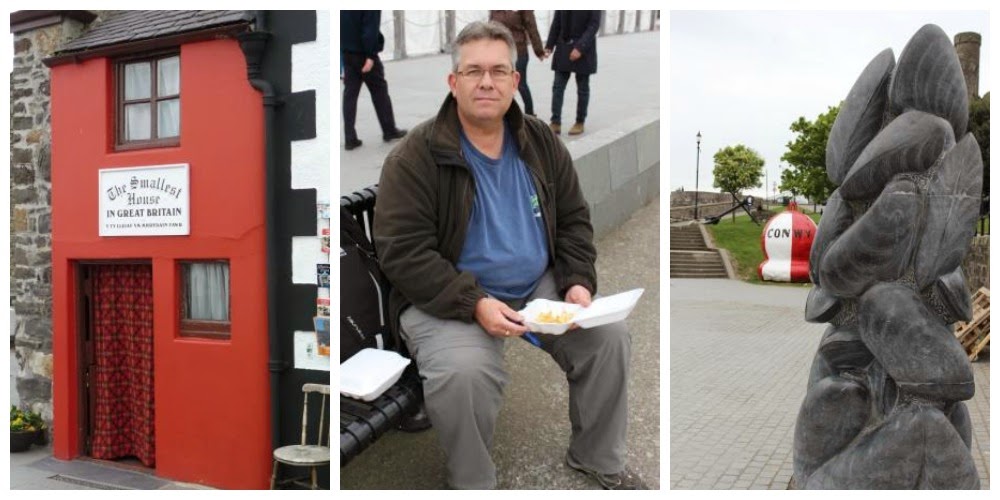 As time was getting on, and we were flagging a bit, we decided to save a visit to the castle for another day.

We made our way round the outside of the castle back to the car, picking up ice creams on the way.  Ameretto and blueberry for me and Ameretto and Turkish delight for Martin. Lush!!

Having seen the castle from a distance from every possible angle on our walk, it was amazing how huge it was close up.  We definitely wanted to come back for a visit to do it justice.

Back to Eglwysbach and up the narrow, steep but very beautiful lane to the seclusion of Buzzards view for Abruzzi Lamb, which Martin had set off in the slow cooker this morning, while I was still fast asleep.  He really is a cracker!
Posted by Carol at 14:20