Day 5 - Tuesday
We decided we wanted to rest our legs a bit today, though it didn't really end up like that in the end, so we planned ourselves a scenic circular driving route, picking up some caches along the way.

As we had got up to kind of brightish sunshine and some blue sky we decided we'd do something which was a little bonkers but we'd been talking about since we got here.  Now, Mum and dad always reckon that we find the narrowest, scariest lanes to drive up and down when we go on holiday and we have been known, when they have visited us at a cottage, to get them to park at the top and we've picked them up and driven them the last part of the journey, as it's just been too hairy for them to drive all the way.

We knew they would have thought the lane up to Buzzards View surpassed anywhere we'd taken them so far and, as they weren't visiting us this time, we didn't want them to miss seeing it, so we thought we might try and film it.

Well, we've got a video camera and the old lady does have a sun roof!  I drew the short straw and was on filming duty.  Martin said that made sense as he knew the road. Whatever!!  Anyway, there was I, knelt on the front seat, head out of the sun roof, filming our descent.  I know, crazy.  If Martin had  braked hard I would either have had my head chopped off or cracked my jaw and lost most of my front teeth.

Fortunately, Martin is a very safe driver and I knew I was in good hands, though I did get a bit worried when he sped up a bit for effect.  It got a bit embarrassing as we approached the farmyard towards the bottom, which we had to go straight through. The farmer was just getting out of his car and, as one of his many cats was sitting in our path, he headed straight for us to shoo the cat out of the way, like we would ever have hit it, we love cats.  We would have sat there all day, rather than done it any harm.

Anyway, I felt the need to explain why I was hanging out of the sunroof and fortunately he was a very friendly and jovial farmer so I didn't feel too bad.

You can watch our film here.

So, that out of the way, we headed on for Betws-y-Coed.  Our plan was to stop there for a few caches, head though the mountains to Llanberis, up to Caernarvon, through Bangor and back along the coast to Conwy and back to Buzzards view.  It was a long old drive.

Things didn't quite go to plan, we made it to Llanberis, having gone just over 30 miles, and it was already 3.00pm.  By the time we were ready to leave there it was 4.30pm, so we ended up just turning round and coming back the way we came.  Amazingly, though it had taken us about four and a half hours to get to Llanberis, it took us just an hour to get back, amazing how caching can distract you with interesting places that you wouldn't normally stop at.

Our first stop of the day went as planned and we picked up a cache at a church in Betws-y-Coed. 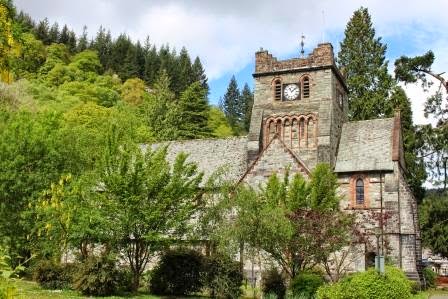 I then decided that, rather than stick on the A5 we would cross the river and take a single lane track through the forest up to a viewpoint where there was another cache.

We picked this one up and linked back up with the A5 by the Ugly House.  Well, there was a cache nearby so we stopped to pick this up and, the Ugly House, which is not ugly at all, was a tea room, well, we hadn't had any cake yet this holiday, so we had to pay it a visit.  We also both needed a toilet stop, which meant that we both experienced a first.  Have you ever used a composting toilet?  We hadn't either.  Interesting experience that was. 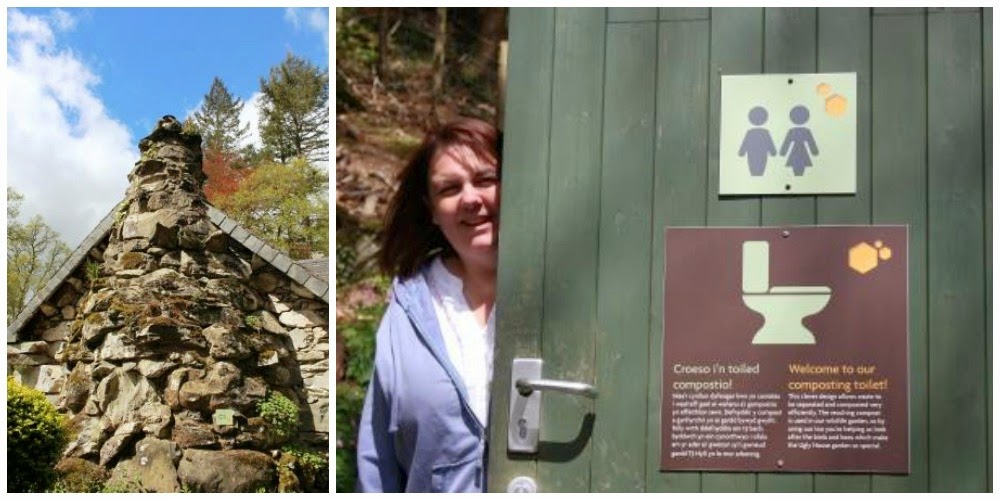 Anyway refreshed by cake and ready for more adventures we continued with our drive, stopping every few miles to pick up a cache hidden at a scenic viewpoint, taking lots of photos along the way.

Our next stop of note was to complete a cache at Dolbadarn Castle.  This had been set by someone who used to visit the castle as a child on family days out.  They really were the best weren't they?  No theme parks or retail parks, just something interesting to look at in the countryside with a picnic in the boot.  Just reading the cache description made me remember similar days out with my own family when we'd go somewhere, take a picnic, probably swim in a lake or a river and generally wear ourselves out.  I don't think people do this kind of thing now and it's a real shame. 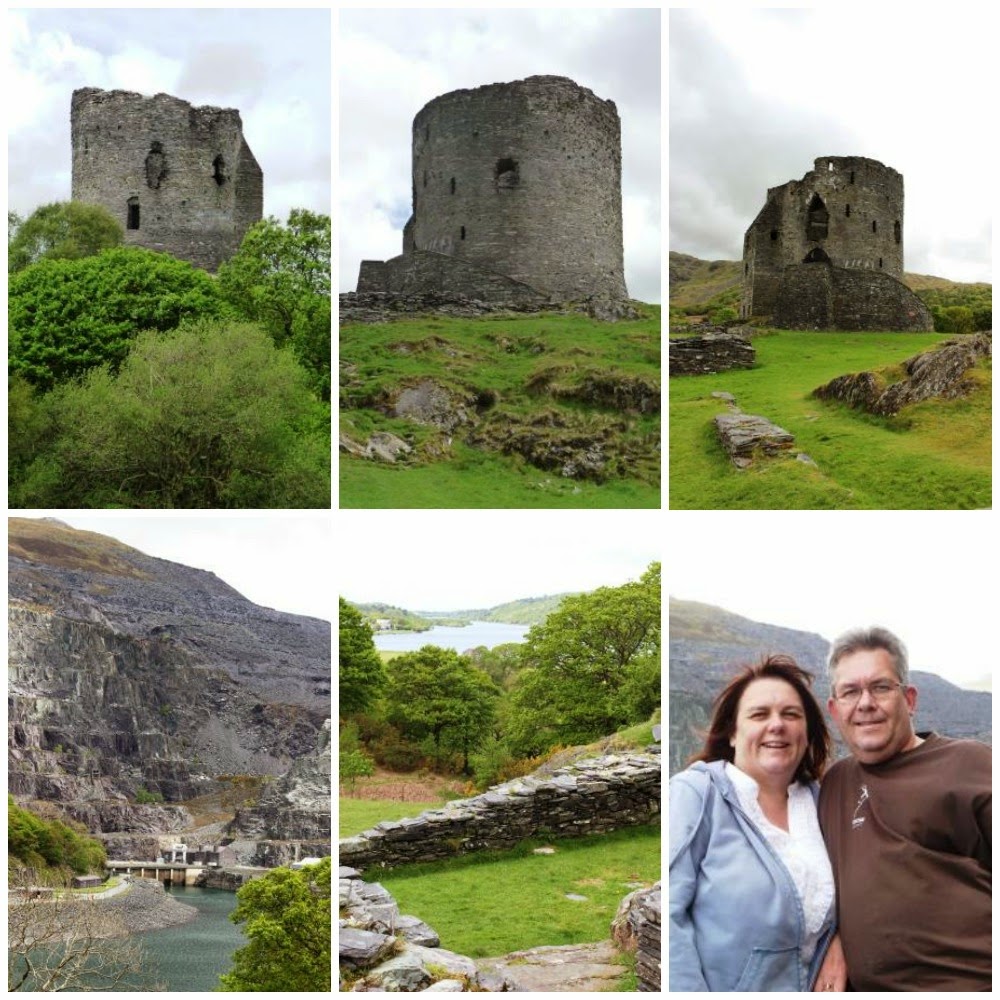 We loved the castle, the views in every direction were amazing, even though by now, it was fairly overcast.  And to think, without Geocaching it's somewhere we would probably never have seen.

From here we carried on to Llanberis and parked up just in time to see the 3.00pm train heading up Snowdon.  Based on forecasts for visibility it didn't look like we would be making this trip this holiday.  After all, I don't just want to see clouds. 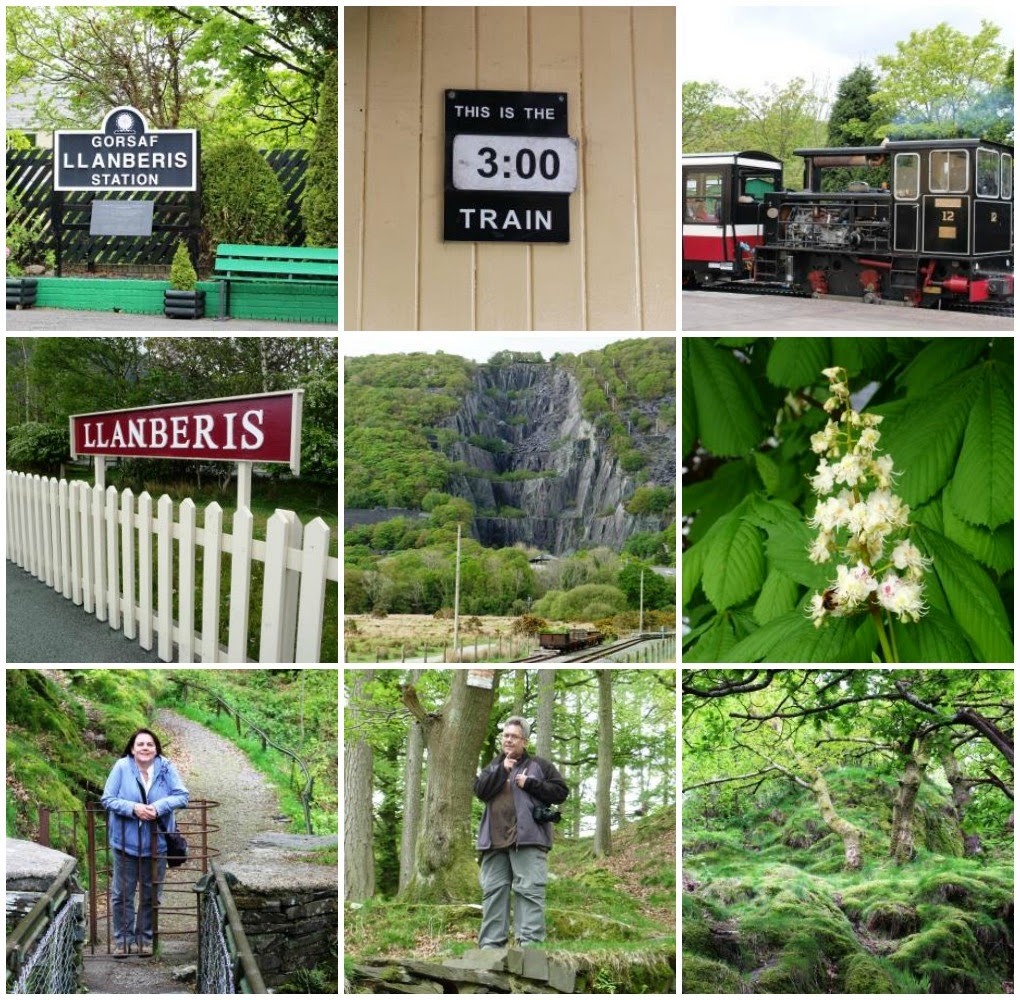 We had a good wonder round Llanberis, including another unexpected walk back to the castle from the opposite direction, which I will never live down, picked up a few more caches before deciding we ought to head back.

As we headed back Martin and I both agreed that we'd forgotten how beautiful North Wales is.  Whilst we've both visited lots of times, neither of us has been for a good number of years.

On the way back Martin also decided that it would be a good idea to film the journey back up the hill to the cottage as it would be more dramatic.  Well, he was right.  Firstly it was raining so it was pretty hairy hanging out of the sun roof.  Secondly we came across a sheep with its lamb in the middle of the road on the way up.  We kept stopping to see if they would either come back down the road or find a way back into the field.  They didn't, we ended up following them all the way up the hill.  There was an awful moment when they both decided they could cross the cattle grid at the top of the hill but fortunately they both made it safely.

As soon as we got back up to the top we turned round and went straight back down to the farm to let the farmer know that he'd got some escapees.  We went back up to find them happily grazing away.