A Fortnight in Cornwall #1 - Our First Weekend

It has been raining pretty consistently here all weekend and this morning has been no different.

It's so lovely to have a bit of a throwback to some sunshine on the North Cornwall coast from just a few weeks ago.

I just have so much to share with you that I don't quite know where to start. 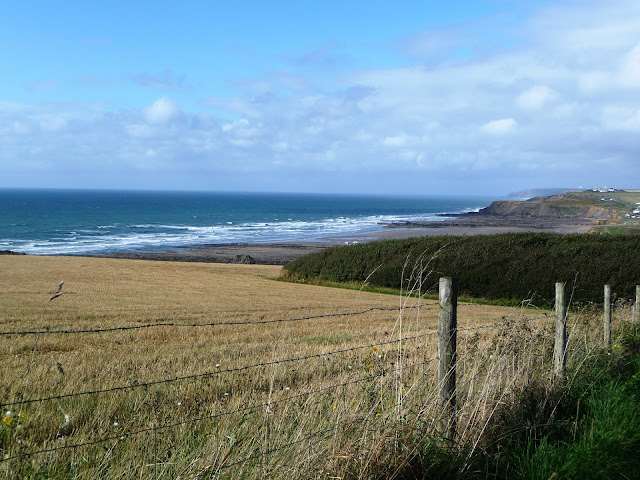 Having thought about lots of different ways of presenting this series of posts I think the simplest thing to do is to just kind of take you on a bit of a walk through of our fortnight ... that way I know I won't miss anything that I really want to capture for posterity.

It wasn't just Martin and I heading South ... mum and dad were spending about 10 days in their touring caravan, at Wainhouse Corner, just a short drive away, David (my brother), Alison and Bobby were also spending a fortnight in another holiday cottage literally just up the road and our good friends Lesley and Tom were spending five days staying in a chalet in a holiday park the other side of Bude.

We were hoping to get to spend plenty of time together, getting to see Bobby's first real experiences of the beach and the sea, as well as getting a bit of time on our own to kick back and just generally chill out.

We were travelling on a Friday and we had a reasonably good journey down, with a pleasant hour or so catching up with David, Alison and Bobby at Sedgemoor services, where we stopped for a bit of a breather. 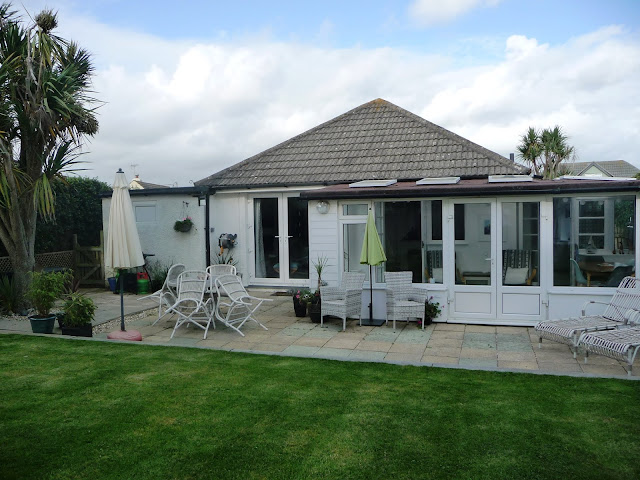 We arrived at about 4 o'clock and were able to get straight into West Holm, our home for the fortnight. We spent the rest of the evening unpacking and exploring the cottage and just generally settling in.

Saturday
Our first full day and we didn't have much on the agenda, just a bit of a mooch round Bude, a look at the sea and just maybe a pitstop somewhere with a view.

Bude was really busy, with a quadratholon under way. We parked at the tourist information car park and dodged the cyclists and the runners as we made our way along the canal towards Summerleaze Beach. 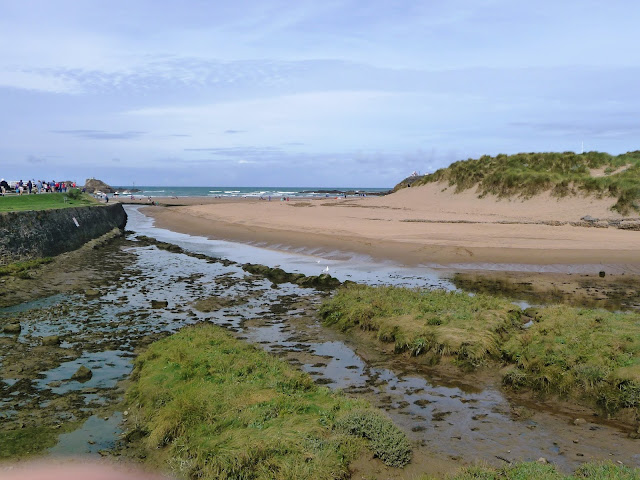 We took a right, through the old archway and headed around the back of the castle, past the recreation centre and the crazy golf, over the river and into town.

We bumped into David, Alison and Bobby at the shop on the corner, where they were stocking up on buckets and spades, windmills and other general beach paraphernalia necessary for a soon to be two year old.

We just wandered up the main drag, round the back of Sainsburys, where we found the old pub on the top had been converted to apartments ... it has just been so long since we've been down here.

We were heading for 'Life's a Beach'. A cafe with a fabulous view looking over Summerleaze beach. We were soon settled in with cold drinks, the crossword and a view to die for.

We were pretty surprised to spot David, Alison and Bobby in the distance ... you can see them if you look closely ... just to the right of the photo, pottering in the rockpools ... 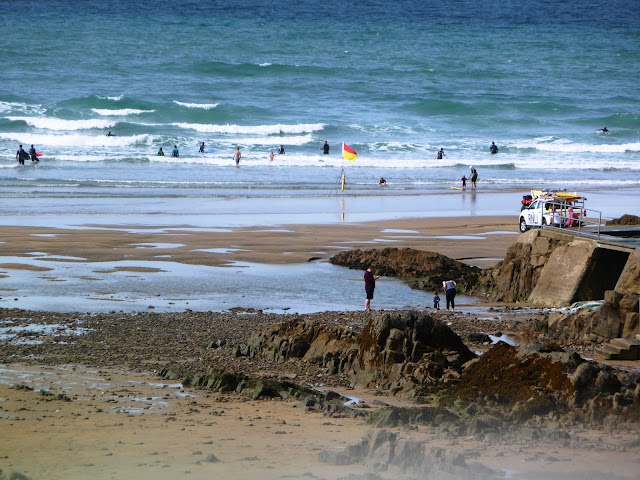 It seemed fair to say that any reservations about what the little man may think of the beach were totally unfounded. He seemed to be having a whale of a time.

As they made their way back up the beach we wandered down to meet them ... 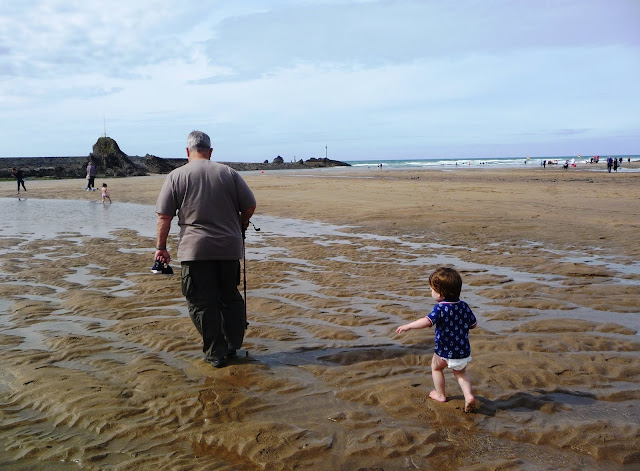 The little man was more than happy with this new environment, both in the water ... 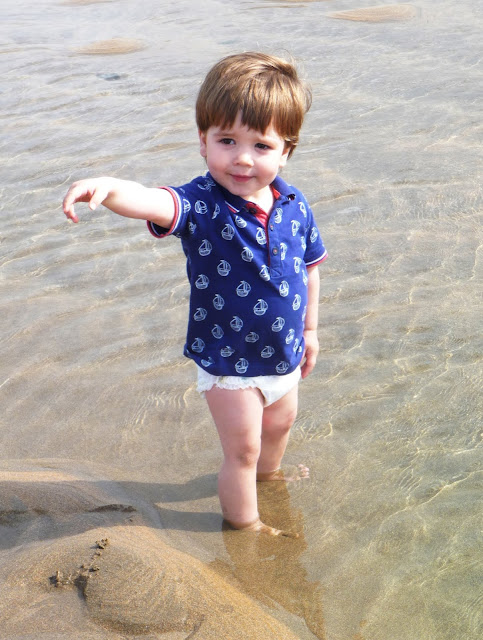 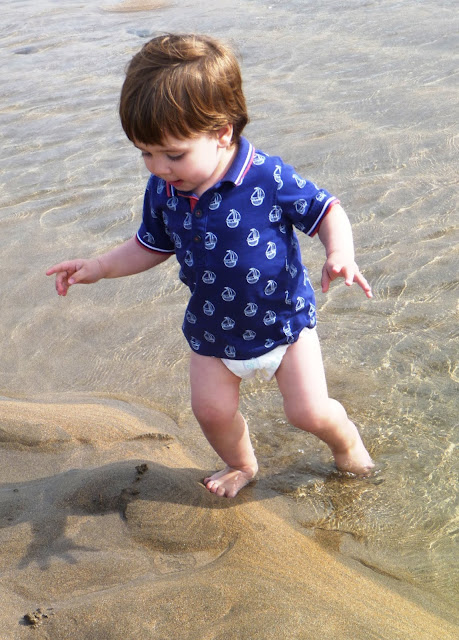 ... and on the sand ... where the holes Martin made with his walking pole were an endless source of fascination ... 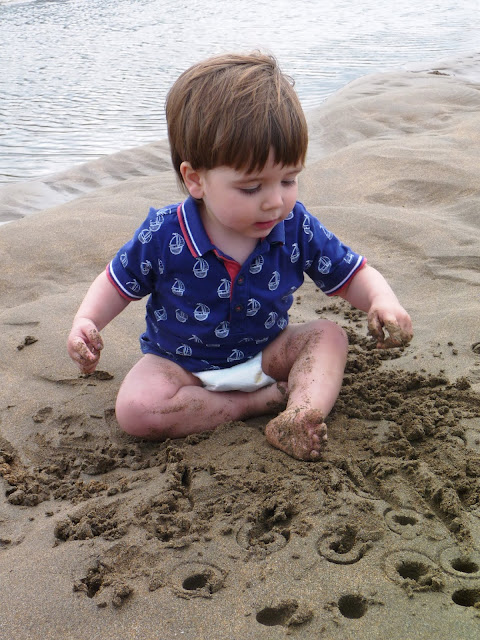 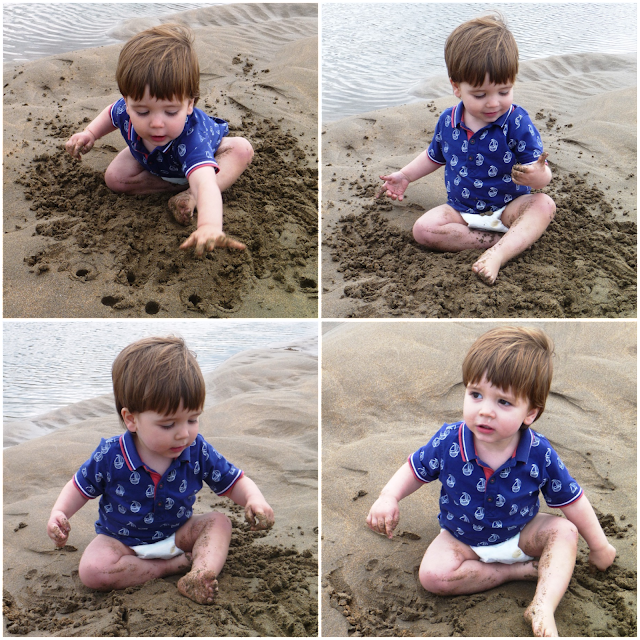 It was soon time to swill off the sand and head off ... 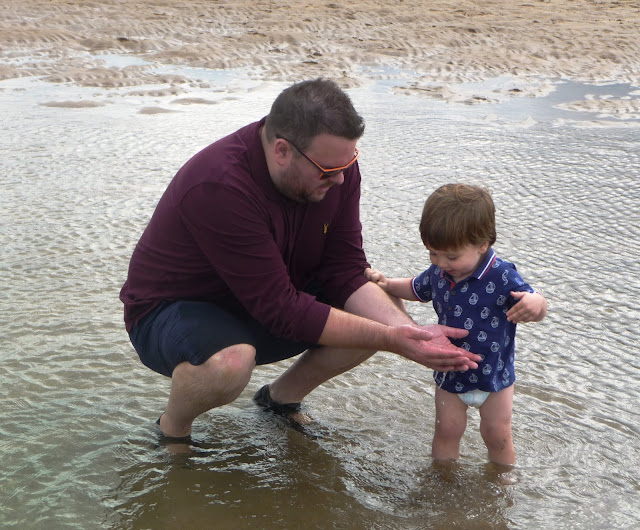 We spent the evening chilling out at West Holm, with a pre-prepared cottage pie for tea whilst watching X-Factor. It had been a lovely first full day and the weather forecast seemed to be looking promising.

Sunday
We were aiming for another lazy day and we started out with a short amble out to one of both our favourite places ever ... the point above Widemouth Bay ... it's definitely a contender as a scatter point, if you get my drift.

It was a little bit grey overhead but there was plenty of Autumn colour to be seen on the clifftops as we made our way out to the point ... 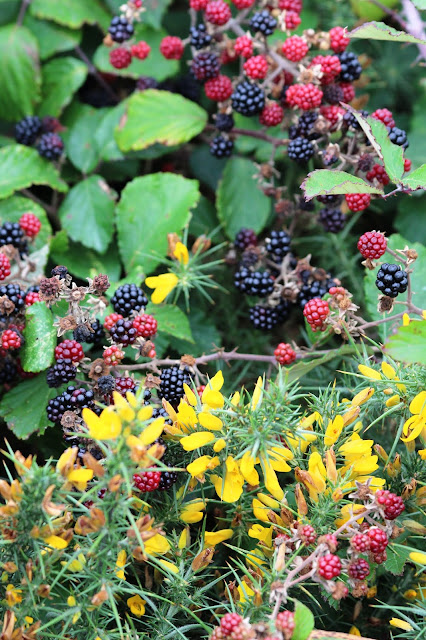 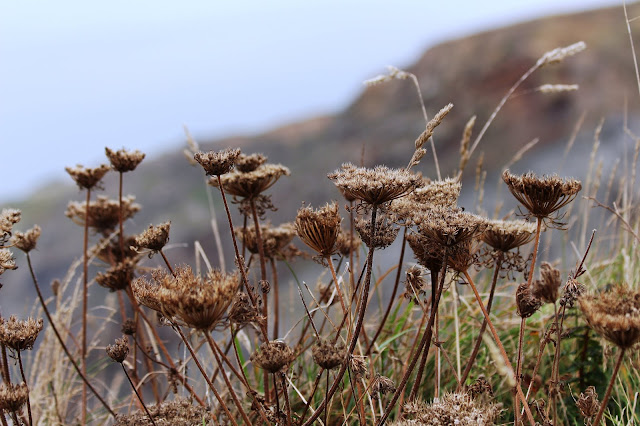 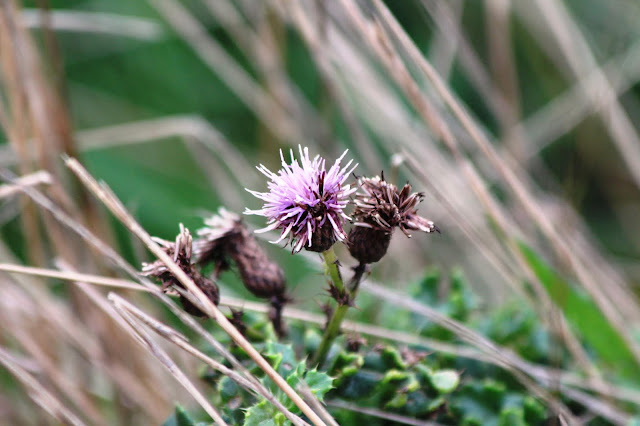 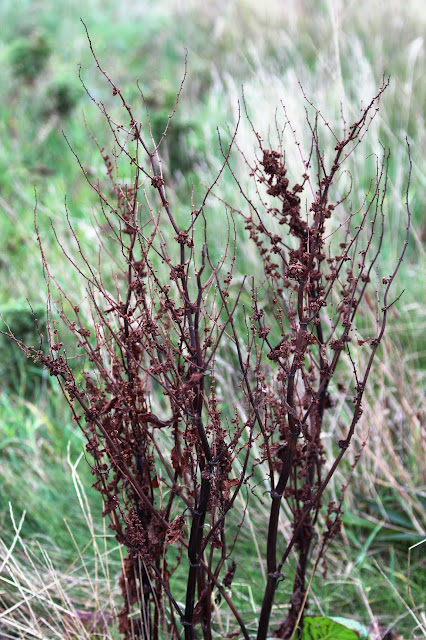 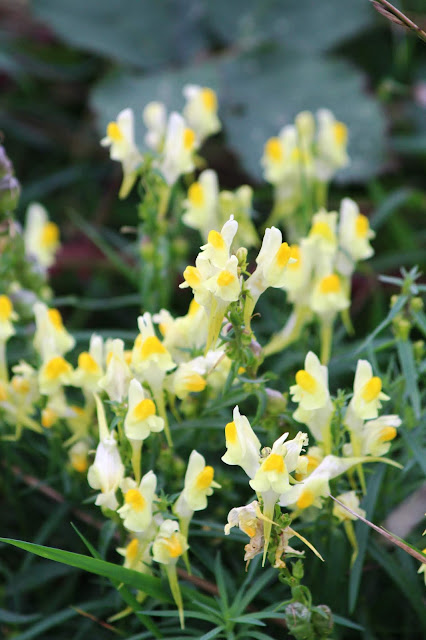 The point itself is actually on the coastal path ... 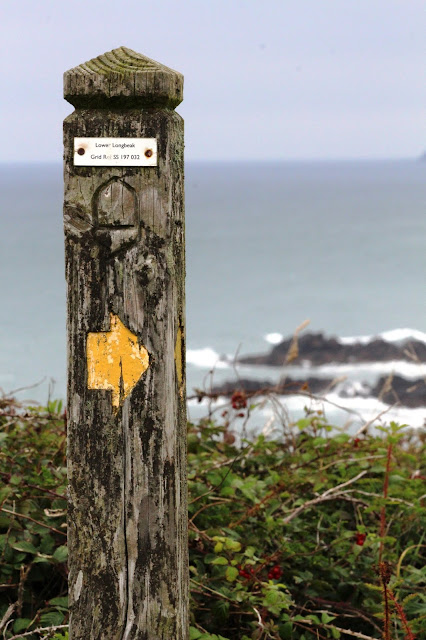 ... and the views in all directions are amazing. It's a great spot to indulge in a bit of selfie fun ... 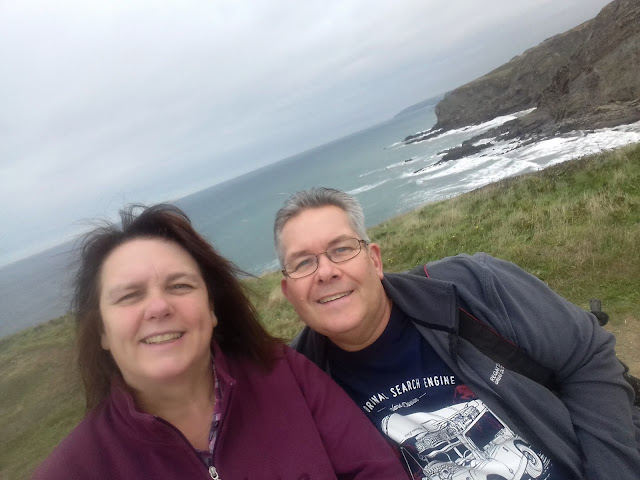 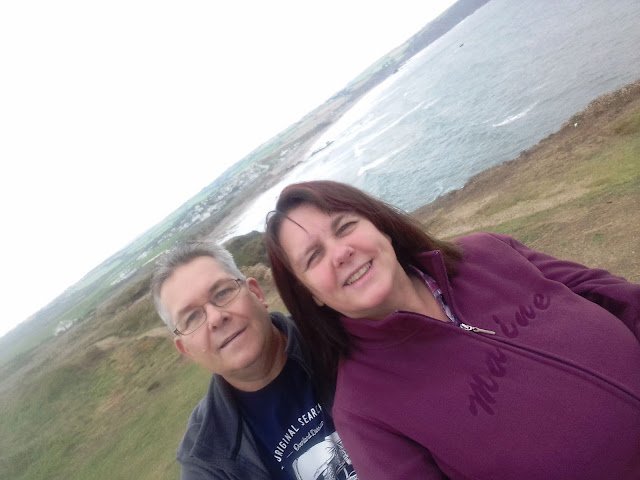 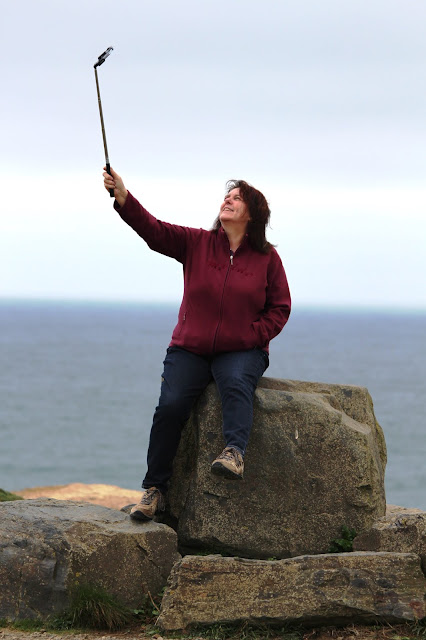 Pretty windswept we made our way back to the car and were both quite sad to see this sight on the way ... 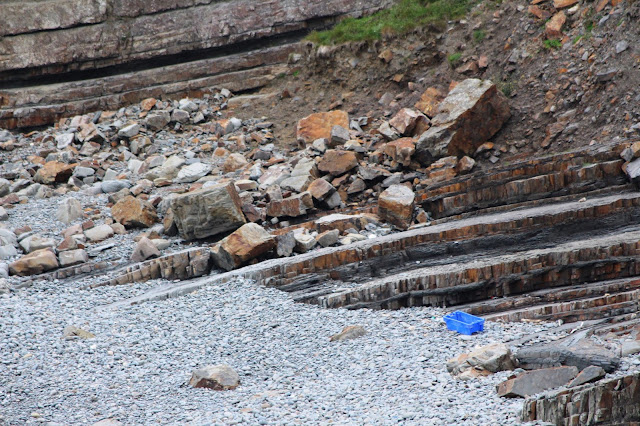 There was just time to have a go at capturing some shots of these dandelion clocks being heading on our way ... 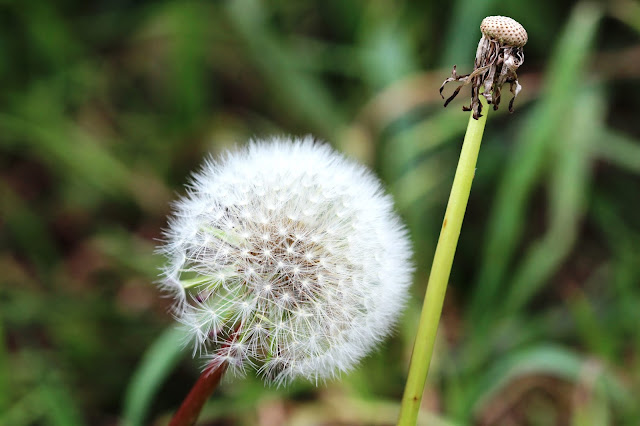 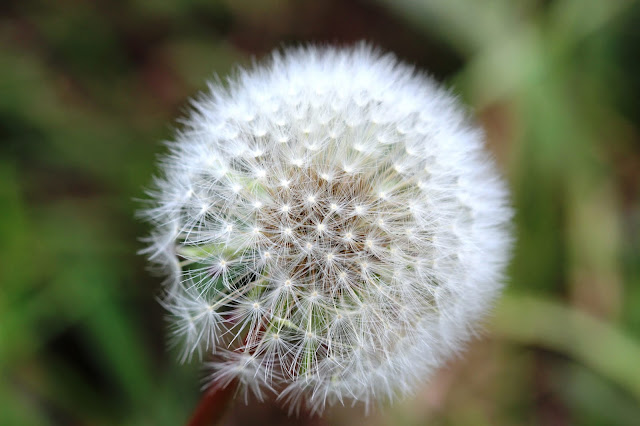 Our next stop was The Weir, for lunch. The Weir is new to us, though its been there eight or nine years now. One of our favourite tea rooms used to be the one at the end of the canal and the beginning of the footpath across the fields to Widemouth Bay. It was a very traditional tea room, run out of the owners own bungalow, with a limited menu pretty much of cake, cream teas and pasties. The gardens were beautiful, with lots of fabulous hanging baskets and plastic tables and chairs on the lawn.

Well, the tea room got so popular that it ended up having to relocate to The Weir, a far more commercial operation. Still in a fabulous location, still with great food, still owned by the same people, but just completely different. We had a really nice lunch but were a bit wistful about the loss of the old traditional tea room that we had both loved.

From The Weir it was a short drive to the Sunday car boot sale where we had a good mooch and I managed to stock up on wool ... 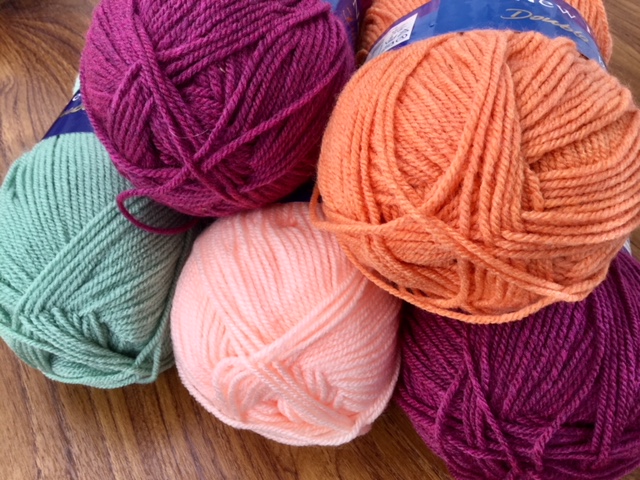 There was then our first visit to Morrisons to stock up on holiday goodies and provisions before heading back to West Holm, via a quick visit to mum and dad's caravan as they'd arrived today, for a cosy night in with the last episode of The Bodyguard.

So that was our first weekend over, Lesley and Tom were arriving on the Monday so we were looking forward to getting out and about a bit further afield for some real exploring 😀

Email ThisBlogThis!Share to TwitterShare to FacebookShare to Pinterest
Labels: Beautiful Britain, Bude, Cornwall, Friends & Family, Life of Pottering, Out and About, Seaside