Will Sidney's War - Postcards from the Front

If you have followed Will Sidney's WW1 story you will know that he was a bit of a collector of postcards, lots of which he sent to his wartime sweetheart, and later wife, Ethel.

I have tried to include as many of the postcards as I can within the posts that make up Will's overall story, but I still have a fair number that I haven't been able to date. On some Will has written on the back, but nothing that really helps with when they would have been bought or sent, and some it is clear where they are from but not how this necessarily fits into Will's story.

Saying this I still wanted to share them with you as they are still part of Will's WW1 journey, so apologies if they seem a bit randon, but here we go ...

This first group are clearly part of a set, referred to on the back as either 'Regimental Colours', seemingly bought from Boots Cash Chemists ... 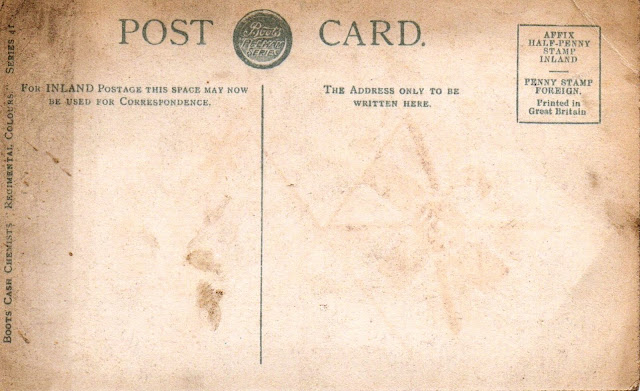 ... or 'Crests & Colours' designed and printed in Lightcliffe, York ... 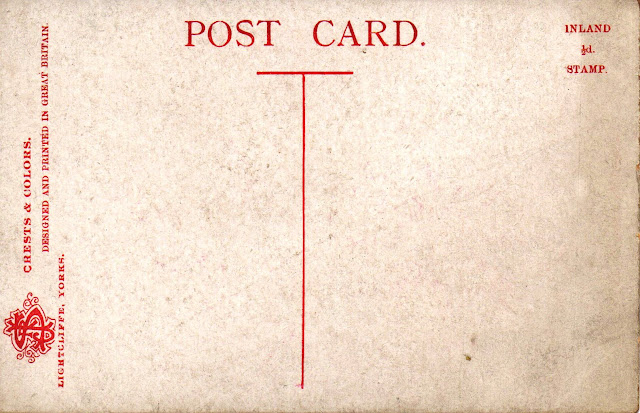 Will had six of these postcards and we have no way of knowing where he obtained his collection from ... 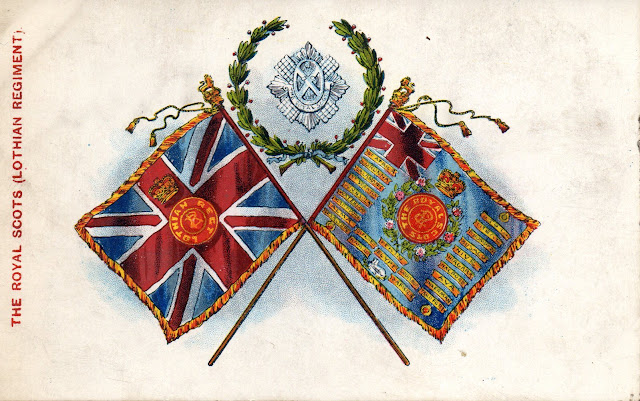 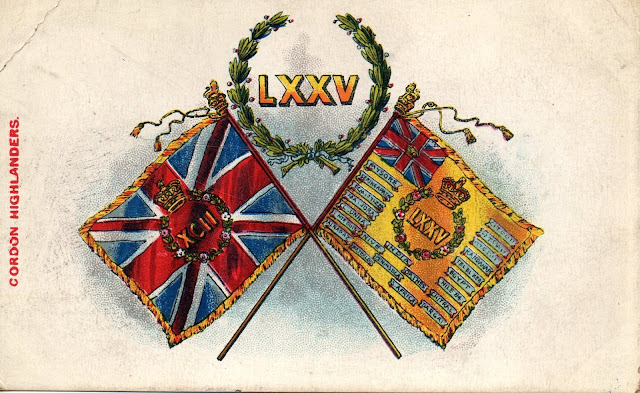 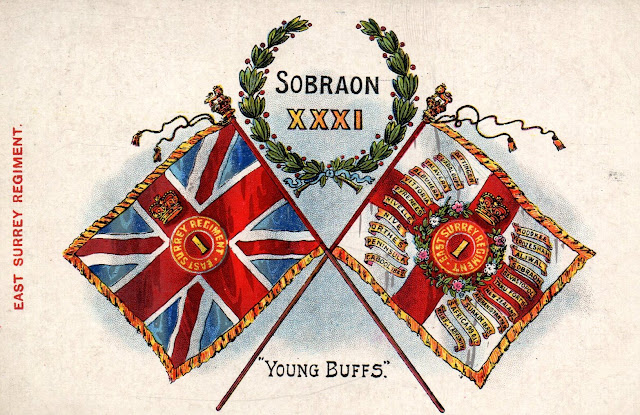 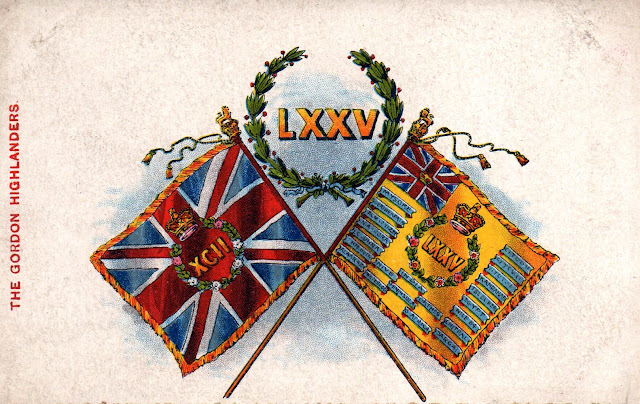 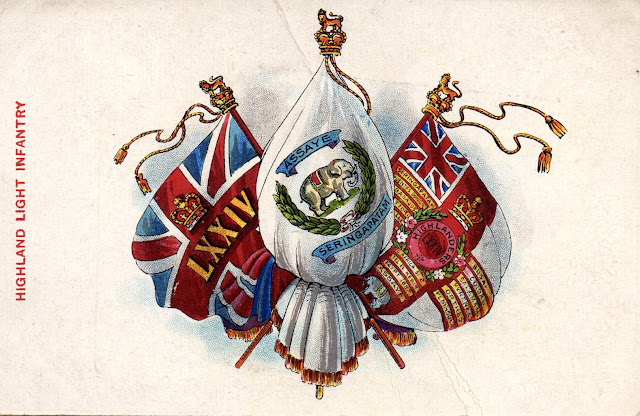 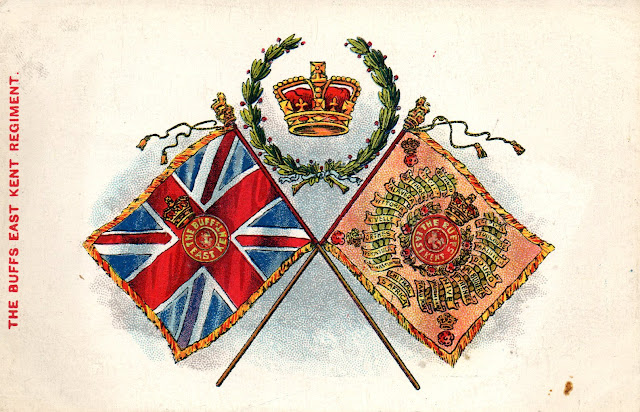 These next three postcards are all depicting scenes from Ostende in Belgium. There is no direct mention of Will travelling through Ostend within his diaries, but it is quite possible that he would have done on one of his postings abroad ... 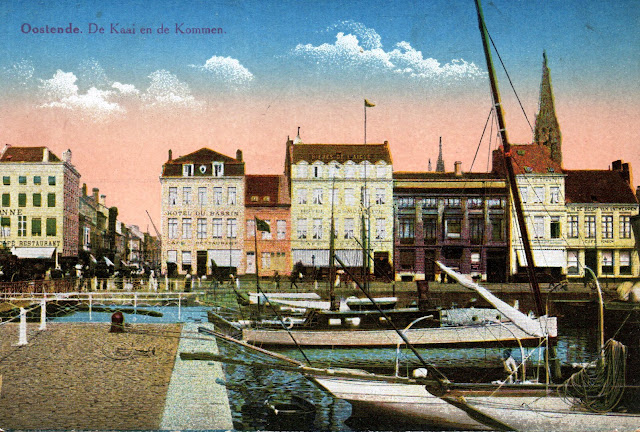 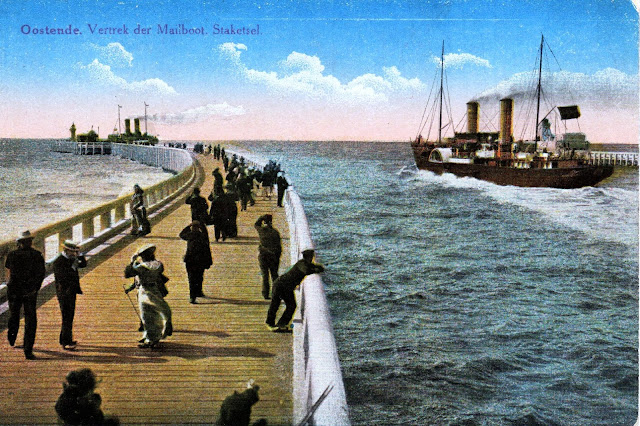 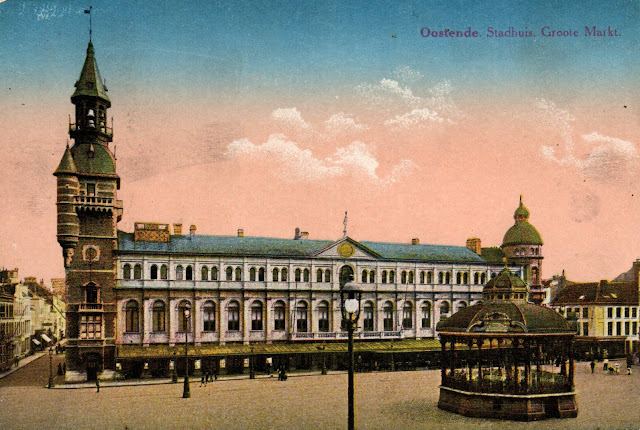 On 28 October 1917 the Battalion war diary states that instructions were received to recall all men from leave, courses etc. On 29 October Will writes, in his own personal war diary, that rumours were going round of the Battalion moving to either Egypt or Salonica. As it happened the battalion ended up moving on to Italy, so I am unsure as to why this postcard would have been in Will's things ... 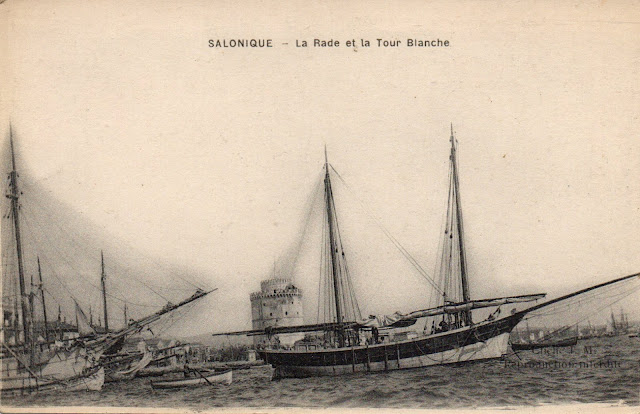 From a browse of Google it would appear that the tower showing in the postcard is The White Tower of Thessaloniki in Greece, where, during WW1 a large Allied expeditionary force established a base for operations against pro-German Bulgaria.

The next postcard is another from Courtrai, a town in Belgium. The Battle of Courtrai (also known as the Second Battle of Belgium was one of a series of offensives in northern France and southern Belgium that took place in late September and October 1918.

Again there is no mention of Courtrai that I could find in any of Will's diaries and in October 1918 Will was actually in hospital in Turin, so, other than he may have passed through the town at some point and not mentioned it, I can see no explanation as to why Will would have the postcard ... 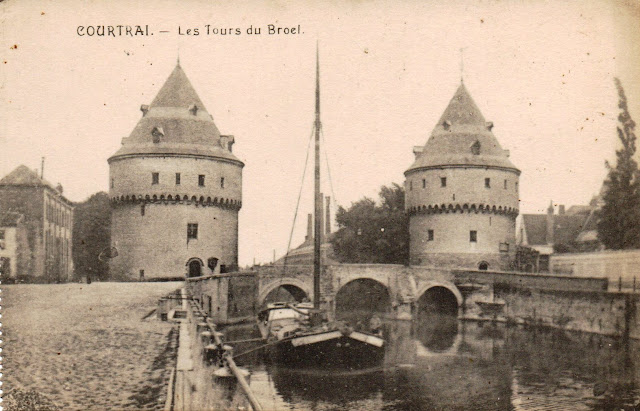 This next photo is of a statue outside a church somewhere in Belgium, I have been unable to identify any further than that ... 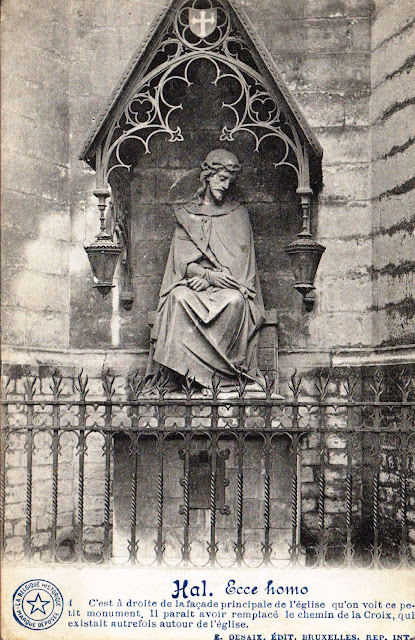 This next postcard appears to have possibly been issued free with a publication of the time, though there is no indicate that this was ever sent ... 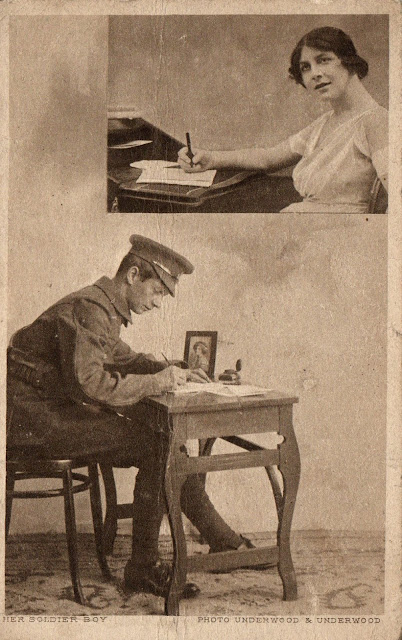 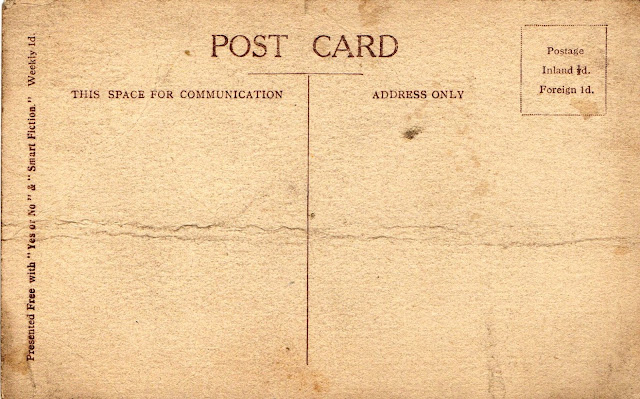 From the printing on the reverse it appears that these next two cards were both printed in Germany. I have absolutely no idea how they have made their way into Will's collection ... 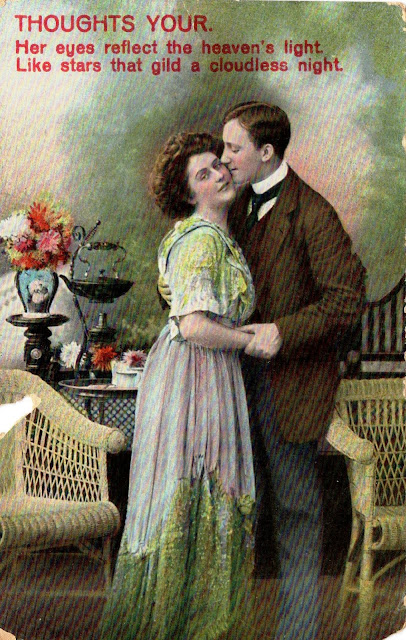 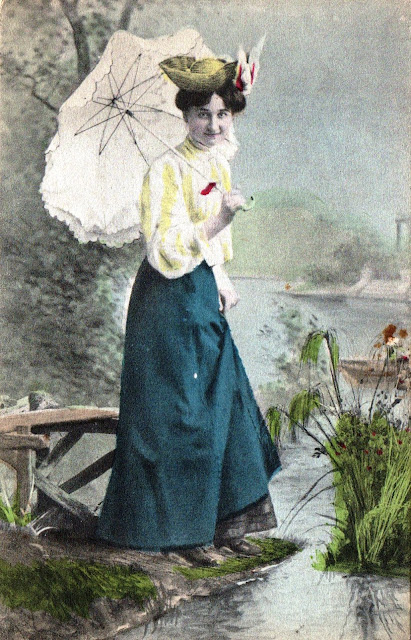 Why Will would have had this postcard of Gertie Millar in his collection is unclear ... perhaps he was a fan.

Gertrude "Gertie" Ward, Countess of Dudley (21 February 1879 – 25 April 1952) was an English actress and singer of the early 20th century, known for her performances in Edwardian musical comedies under her maiden name, Gertie Millar. 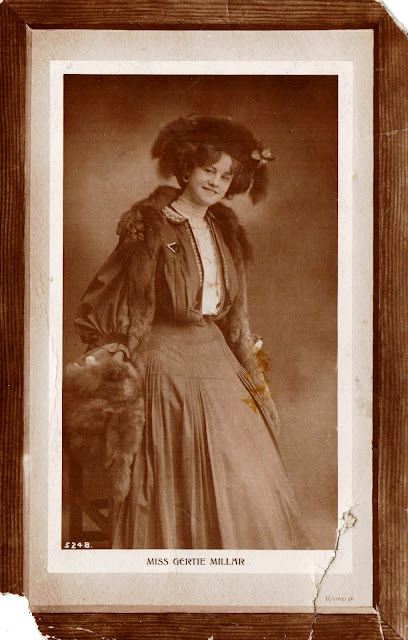 Will makes it quite clear on the reverse of this next postcard that this is where he spent lots of time bathing, though I have trawled through his diary entries, whilst in Italy, and can find no mention of Verona at all ... 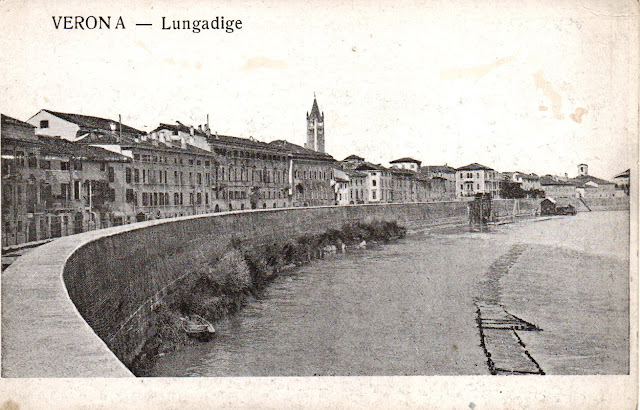 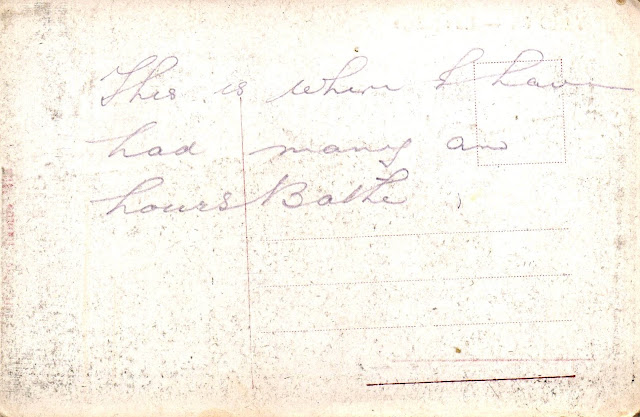 This next card appears to be one that Will would have sent to Ethel at some point. I have no idea of when or where from ... 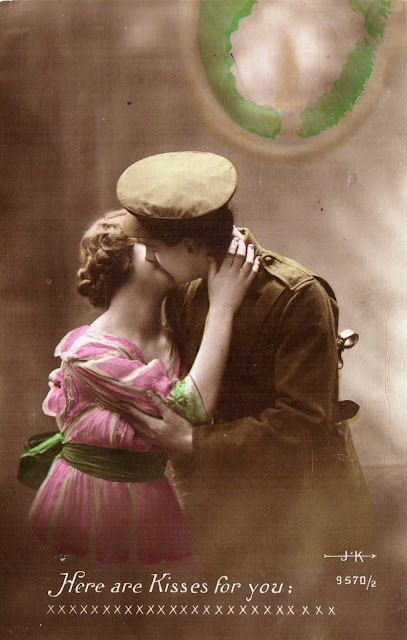 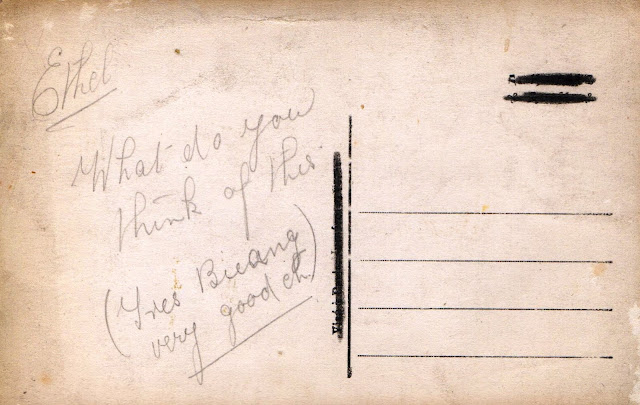 This is the very last postcard in Will's WW1 collection. It is unclear when it was sent, though it is addressed to Mrs WP Sidney, so must have been after they were married in November 1918 ... it appears to be postmarked Sunderland, but I can't decipher the date ... 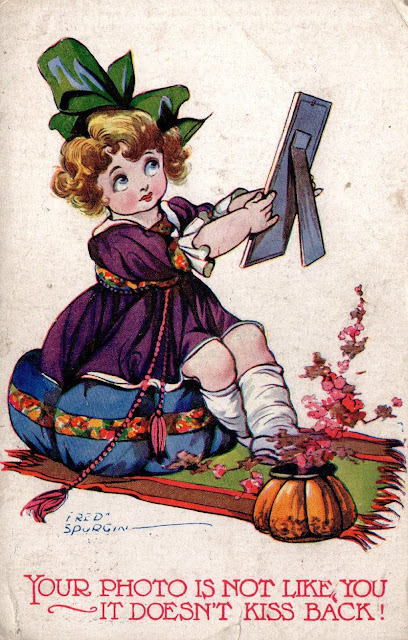 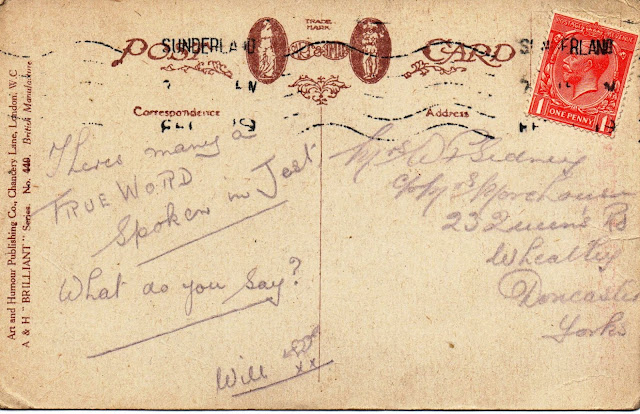 So that's it then ... the very last of Will's WW1 postcard collection. I do hope you've enjoyed them. I know that I've shared a fair number of cards that Will sent Ethel across the course of my previous posts but I do still have a few left to show you, so hopefully I will be back soon with these 😀