William Preston Sidney was Martin's granddad.  When Martin's mum died earlier this year, we came across lots of WW1 memorabilia in Martin's mum's things, including his granddad's war diaries for 1917, 1918 and 1919.

Having read some really poignant entries from the diaries I decided that I wanted to look into Will's story more and to share it here on my blog.  If you are new to Will's story and would like to follow it from the beginning, you can find all previous posts here.

My last post finished at the end of July 1917.  At the start of August 1917 Will was still with the 9th York & Lancaster Battalion in billets in the Meteren area of France, not far from Ypres.

Following his Sports Day accident in July it seems that Charlie, Will's brother, was still incapacitated and hadn't re-joined the Battalion as yet.

From Will's diary it seems that the first part of August was fairly uneventful for the Battalion.  Will writes about the weather, a mixture of heavy rain and high temperatures, finally hearing that his brother Charlie is all right and his constant thoughts of his sweetheart, Ethel.

The Battalion seemed to move around quite a lot in August, moving from Meteren to Caestre, where they entrained for Arques, before moving on again to Alquines, where they stayed until the 8th of the month,

On the 9th they were on the move again, marching to new billets in Northlevlinghem.  They moved on again on the 10th, marching to Watten station, where they entrained for Proven, thence by route march to the tunnelling camp at St Janster Beizen.

Whilst at the tunnelling camp Will writes of his daily routine of parades, cleaning, inspections, arms drills, musketry practice and trench digging.

On 14 August Will was recommended for his Lance Corporal stripes.  Will was clearly proud of this achievement, though we can find no evidence as to the circumstances for the recommendation. 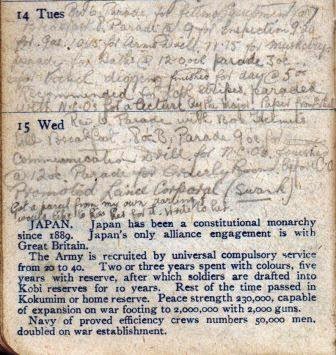 "15 Wed - Rev 6, Parade with box helmets till breakfast.  8o'c breakfast.  Parade 9o'c for communication drill for NCOs, finishing @ 12o'c.  Parade for orderly review before CO. Promoted Lance Corporal (swank).  Got a parcel from my own darling. Would like to kiss her for it.  Writ to her."

Whilst we are not certain as to exactly when this photograph was taken, we do know, from his later diary entries, that Will was actually made a full Corporal on  16 September.  As the note on the reverse of this photograph indicates it was taken whilst he was a Lance Corporal, it must have been around this time.
On 23 August the Battalion were on the move again, this time to Chateau Segard, via Dominion Camp.  It sounds like this is where the war started to get really serious for Will, as he writes of being shelled pretty heavily whilst at Chateau Segard.

From here, the Battalion move again, further up the line, to Zillebeke Bund, just about 1.5 miles south-east of Ypres, before moving on to Wippenhoek, again, very close to Ypres. 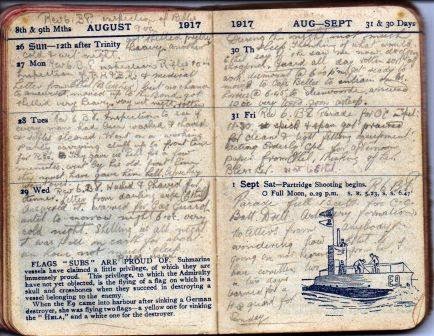 "28 Tues - Rev 6, B 8, Inspection to see if every man had been washed & shaved & rifles cleaned.  Went on a working party carrying stuff up to front line for REs.  They gave us hell for a few minutes.  Went by his old front line.  They must have give him hell before they went over."

"30 Th - During the night not much sleep.  Thinking of what would Ethel say if she saw me now, dodging shrapnel.  Guard all day.  Rotten sort of work.  Dismount @ 6o'c pm.  Get ready to move to Cafe Belles to entrain on M lorries @ 6.45 to Stumwoorde.  Arrived 10o'c.  Very tired.  Soon asleep."

This is where the Battalion saw out the rest of August, in the thick of the action on the Western front. However, September would only see an escalation of action for the Battalion.  You can read more about that in my next post.
Posted by Carol at 09:54