It definitely feels like craft fair season over here at the moment.

Last year we made a conscious decision not to attend any craft fairs at all. We hadn’t had masses of luck the previous year and with all the work going on in the garden we thought we had enough on our plates.

This year we decided to give it another go and have been keeping an eye out on Facebook for local events. I'm hoping to find perhaps half a dozen different events that can become regular fixtures for us.

Our first foray, back in May, was to Hoar Park Shopping & Craft Village, where there is a monthly craft fair held inside their Red Barn. we had made a couple of visits previously on a bit of a recce and thought it looked promising. 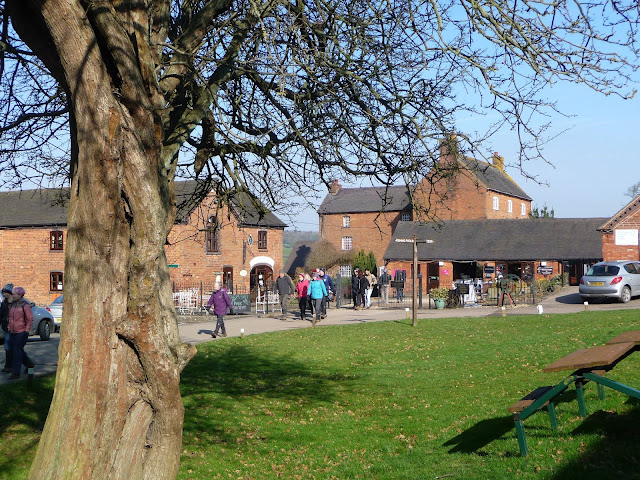 There is lots going on at the site ... a large children’s farm, an antiques centre, some little craft shops and a garden centre. 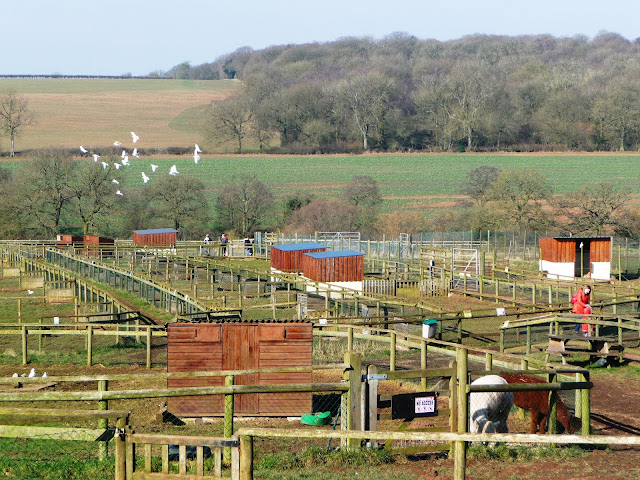 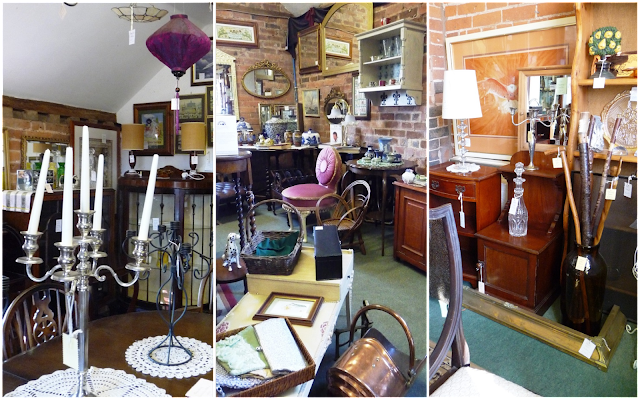 The Red Barn is located in the perfect spot and decked out with bunting and twinkly lights on craft fair days. It was pretty busy both times we’d visited, especially with young mums with pushchairs. We couldn’t imagine anyone passing and not just popping in. 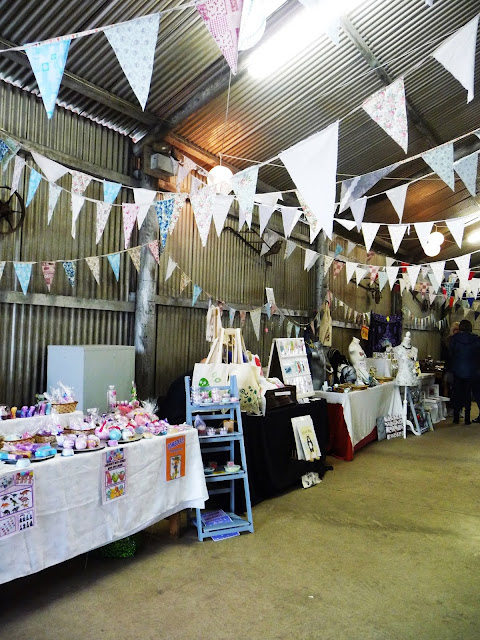 The fair runs from 10am till 4pm and you can’t get in to set up until 9am, so we were there nice and early to make sure we got the full hour to get set up as we didn’t know what to expect. We managed to have a bit of a wander around first thing and the countryside just looked lovely in the morning sunshine. 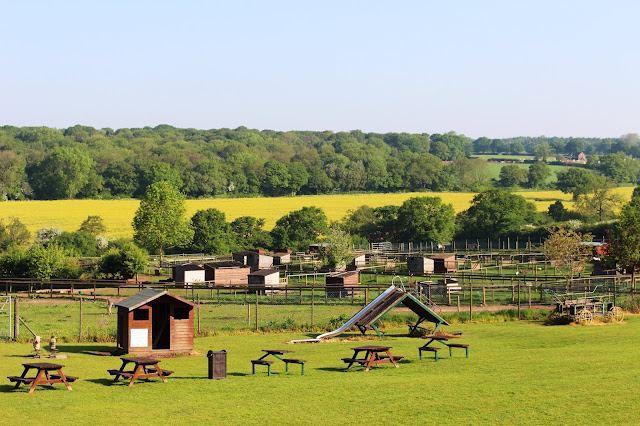 Tables aren’t allocated beforehand so it’s a bit of a mad scramble when the doors open to get in the queue to find out which table you are on.


We were a bit disappointed with our table at first. We were across the bottom end of a central ring of tables and didn’t feel like we had a lot of space. In the end we managed to squeeze a small table to the side to give us a little bit more display space and, as the occupants of the table next to us didn’t turn up we managed to spread out a bit further. 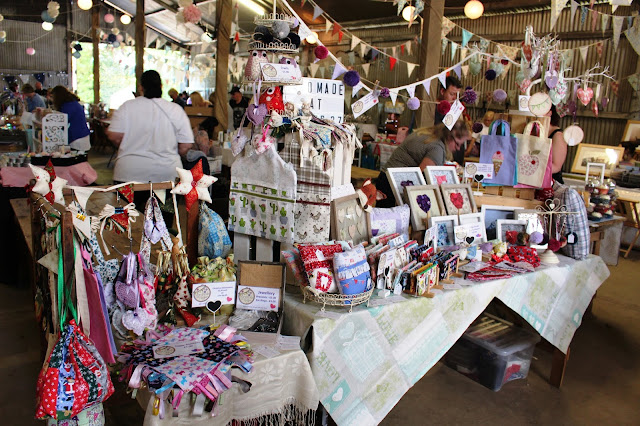 There was a steady trickle of people coming through for most of the day, but there was a bit of a bottle neck where we were and I don’t think a lot of people really felt they had the space to stop and browse. 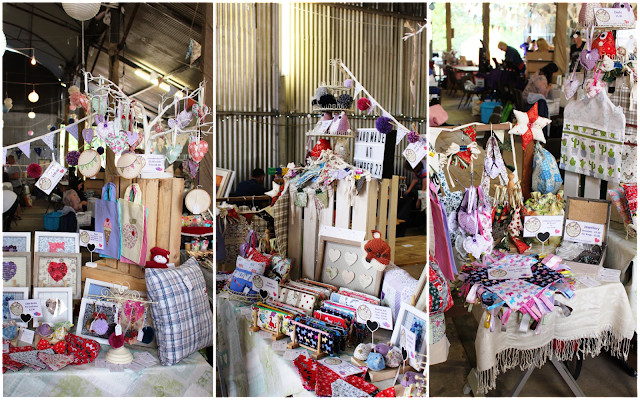 Saying that we sold enough to cover the cost of our pitch and made a small profit. The most popular thing we sold by far was dog bandanas, there were lots of people wandering round with dogs and the bandanas were well placed on the stall so easy to see.

I also took an order from a neighbouring stall holder for two taggy blankets for her two boys, which she’d spotted as we’d spread out along the unoccupied table. They needed a bit of modification from my usual design to make them a bit more robust as the boys both have special needs. It certainly made me think about a different target market from my original, so that was good. 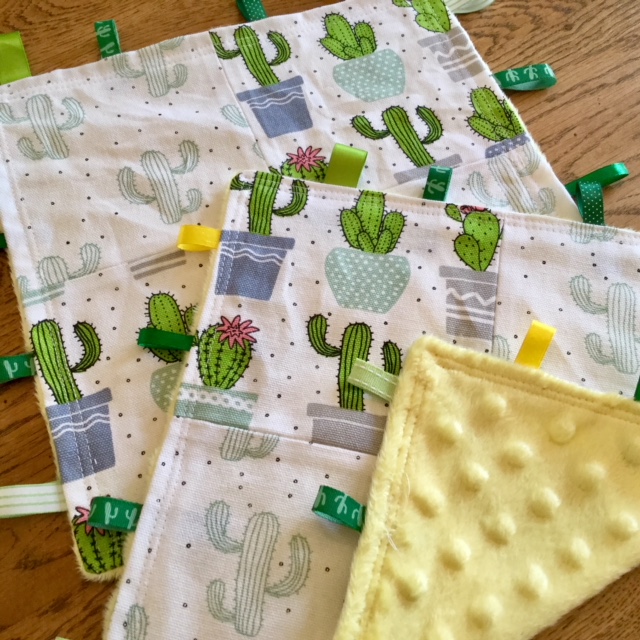 It was a fairly long day, for what we took, but we have another two booked in so will see how we go and hopefully we will get lucky with the table allocation.

One of the first craft fairs we ever did was at the Armitage Village Day in 2016. It’s an event that runs every other year and there is all sorts going on. We did really well on our first visit and even won the best dressed stall competition. The theme was the Queens 90th birthday. 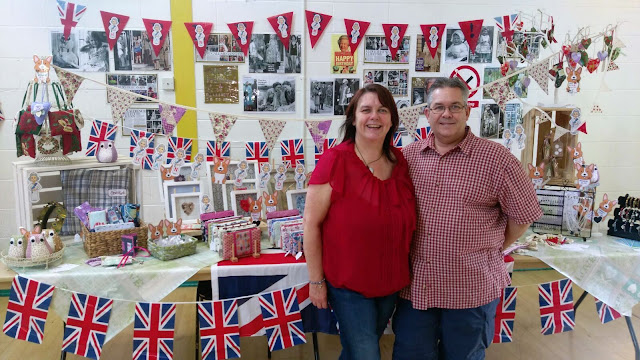 This year’s event was held on 16 June and the theme this time was The World Cup so there was plenty of printing and faffing about with blue tack to make sure we were in with a chance of winning the prize again. 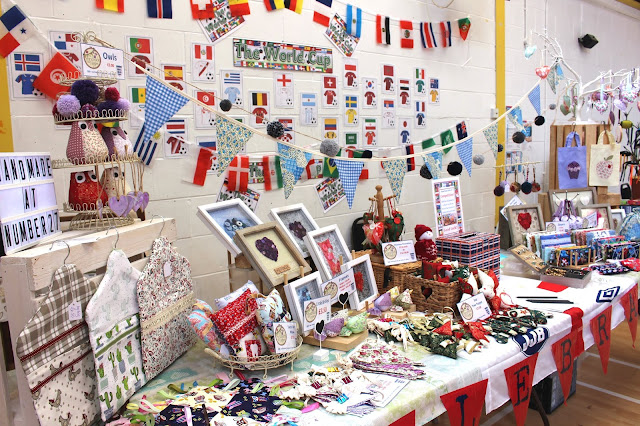 Sadly this time we lost out to the Brownies and Rainbows ... Martin was quite put out ... but we did have a very good day sales wise, taking the most we have done so far at any type of fair.

This was great as we were out again the following week at Lullington Open Gardens and it meant I didn’t have to remake lots of things in the week to stock back up.

This is a really lovely event and we chatted to lots of nice friendly people. I’ve already got the date for 2020 on the calendar.

We were both quite nervous about out third event at Lullington Open Gardens. It’s the first time we have attended an event where we’ve been outdoors, be it in a large gazebo. 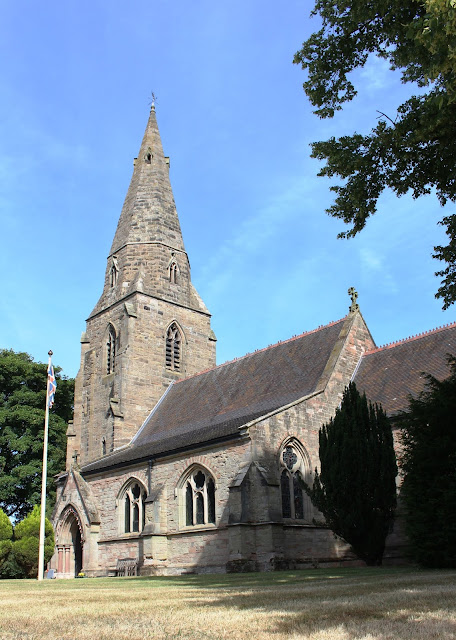 Lullington is a really lovely little village, with lots of pretty cottages. It's a real 'roses round the door' kind of place. 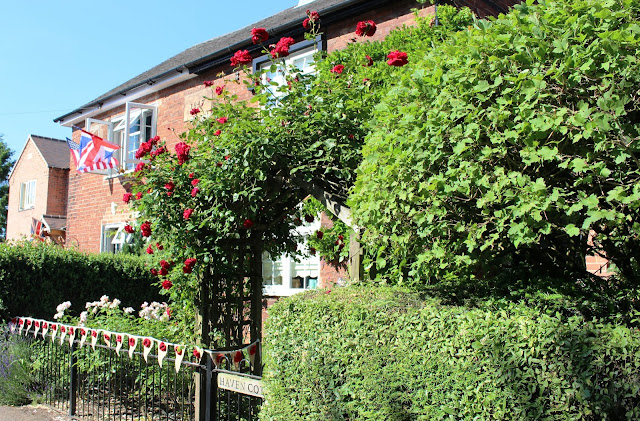 The Open Gardens event runs over a weekend and our initial plan was to attend just on the Sunday, which is normally the busier of the two days ... until we saw that England had a World Cup game and we thought it might keep people at home, so we plumped for the Saturday.

The organiser then reiterated that they normally receive double the visitors on the Sunday so we were in a bit of a quandary. In the end we decided that we would do both days ... Yikes!!

The event runs from 1pm till 6pm with set up from 10am, so it would be two long days. We were also concerned about what time we would start to get busy as we’ve visited the event before and found that people normally visit all of the gardens and the classic car show first, with the stalls on the village green being one of the very last things that they see. 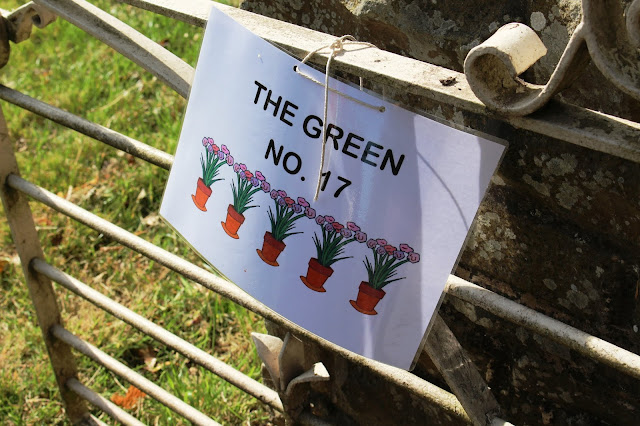 Anyway we decided to risk it and see what happened.

The weekend forecast was for sunshine all the way so we loaded up the car with all the craft stall stuff, a picnic and the sun cream. 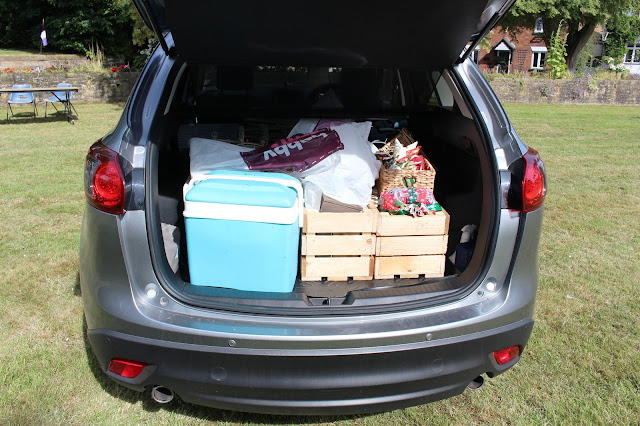 We arrived at at about 10.30 on the saturday morning to find our spot in a gazebo tucked against the hedge and, yikes, no tables. We asked around and ended up having to drive off to find the organiser to sort out some tables but they soon arrived and we got cracking with setting up. 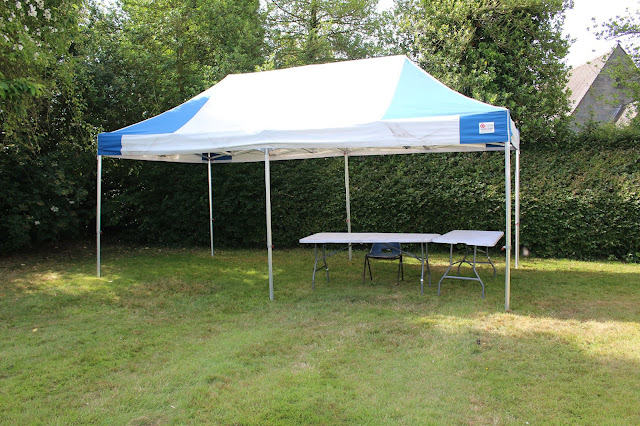 It’s the first time we’ve had the stall outside so setting up was a bit different but it worked out really well.

We had two nice big sturdy tables and were able to make good use of the gazebo roof supports for bunting and the like. We were also able to set up the clothes airer for hanging bits and pieces from and had loads of room to set up camp behind the stall. 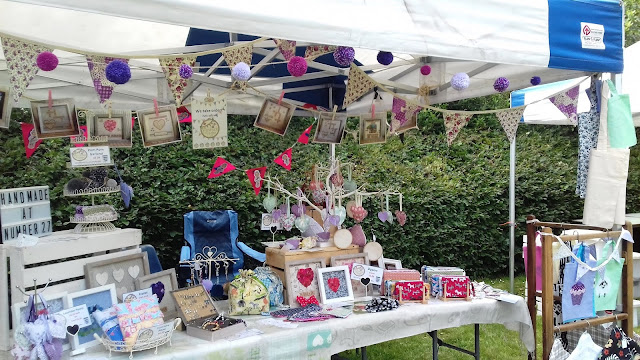 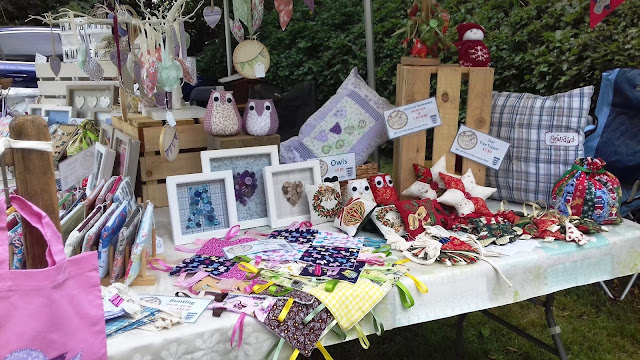 We even had enough room to give a very small nod to Christmas ... 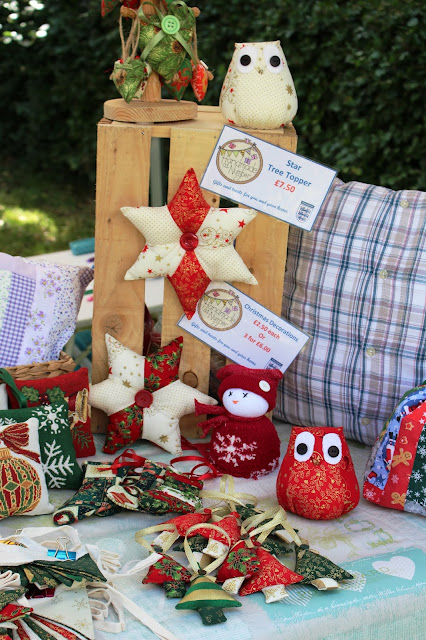 The weather on Saturday was cooler than expected but it was still lovely being able to spend the whole day outside pretty much chilling in the camping chairs chatting to people as they came went. 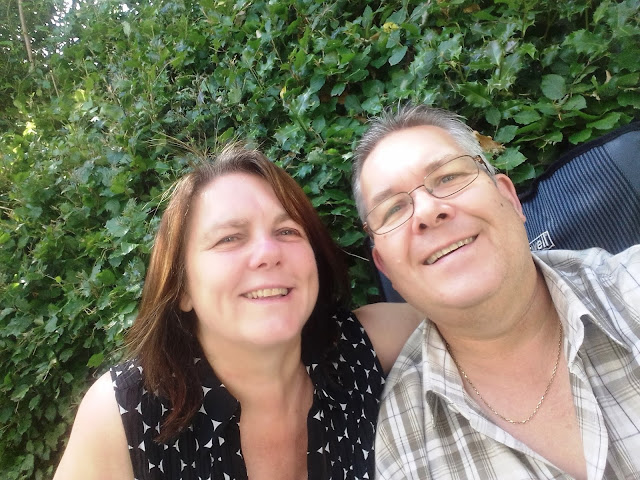 We met lots of lovely people, did pretty well on the sales side so all in all it was a really nice day. Top seller this time was definitely peg bags. One lady even said she’d spotted one from the road and she just had to come back and get it, apparently you can’t can’t find nice peg bags any more. I actually ended up selling out and even took an order for another one. Lullington will always now be known to me as the peg bag capital of the midlands.
We were back on Sunday for more of the same and after we’d got set up I hung around on the side of the road watching some the classic cars arriving for the car show 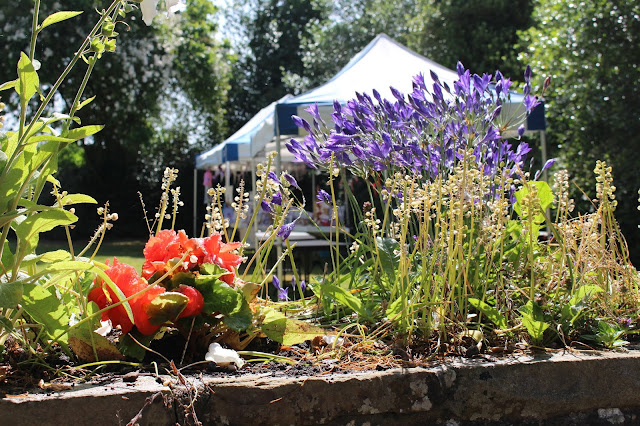 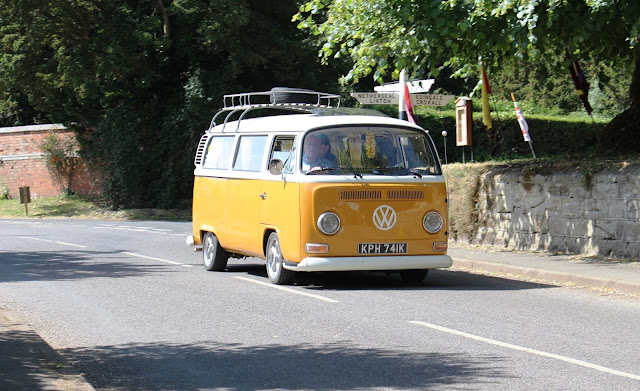 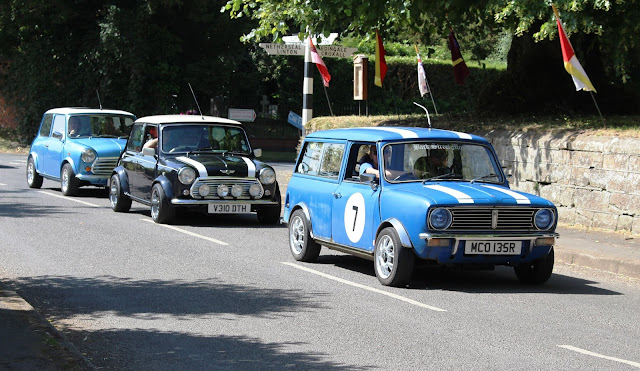 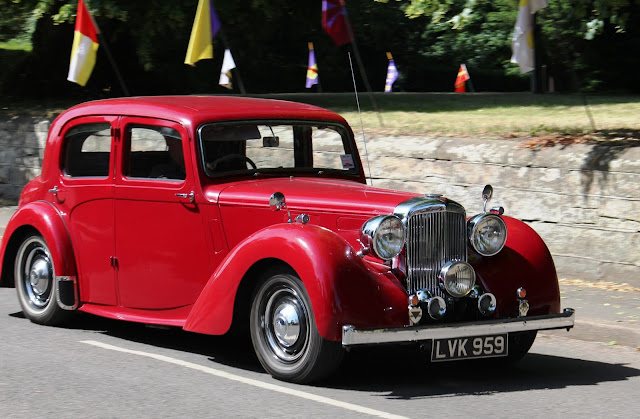 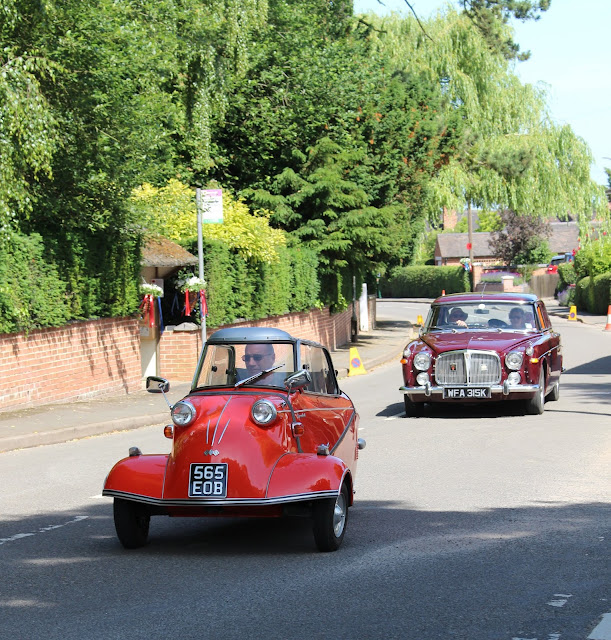 The weather was glorious, it was quiet and peaceful, very genteel, with lots of floral dresses and straw hats passing by and dogs flopping down for a rest in the shade, while we relaxed in our comfy camping chairs and enjoyed our picnic.

The spot we were in was perfect, nicely shaded and had to be passed by everyone as they came and went. 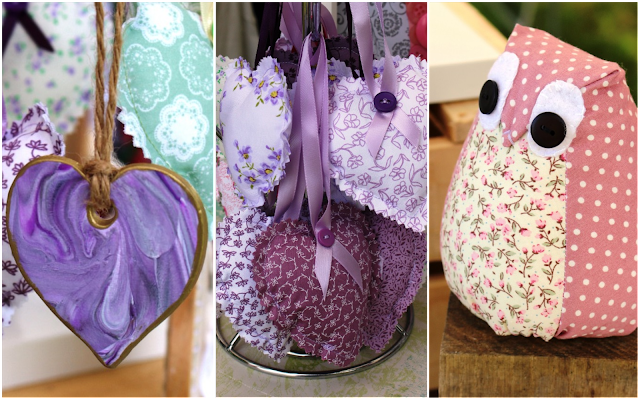 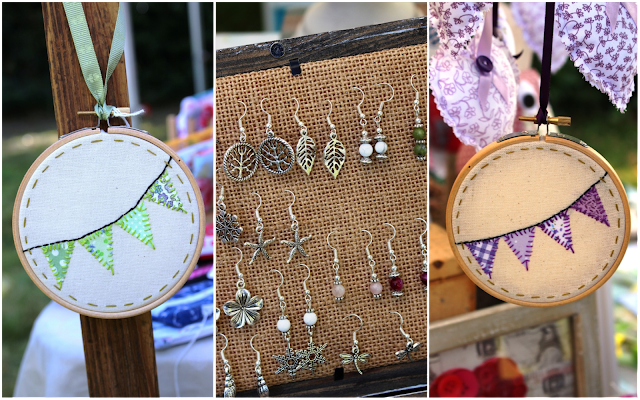 Whilst Sunday saw a slow but steady flow of people we didn’t do quite so well on the sales side but definitely enough to have made it worth our while, as well as having had the loveliest of days just chilling out, chatting and enjoying the sunshine. We really felt as though we were part of the village community, be it for a very short time.

We will definitely be back next year and I’ve already got the dates on the calendar.

We have a couple of weeks off now with our next event back at Hoar Park in the middle of July ... it will be interesting to see how we get on this time ... but I’m going to have a couple of busy weeks stocking back up ... especially on the peg bag front!!